How Everybody's Gone to the Rapture is a response to the state of story and game writing over the last few years.

Everybody's Gone to the Rapture takes the story-driven genre (Dear Esther, Gone Home etc) into an openworld design space. In this blog I talk about game writing and world building that inspired some of the core design decisions behind creating the story.
Dan Pinchbeck
Blogger
June 08, 2015

Let’s talk about Nosgoth. The environment of Soul Reaver: Legacy of Kain is, for me, still an outstanding example of world design, but also a great example of what we wanted to try and do differently with Rapture. It remains one of my favourite ever games (I’m a huge Amy Hennig fan). For me, what’s so special about Nosgoth are places like this: 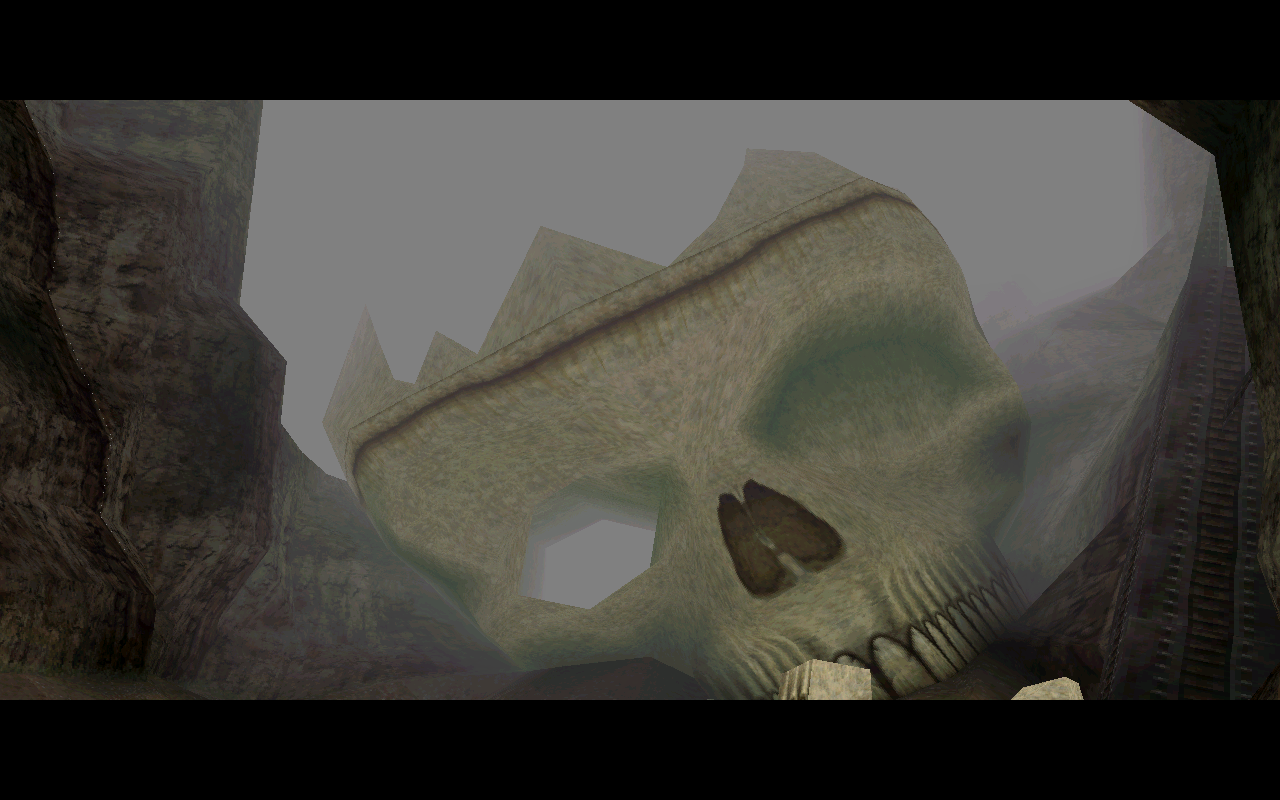 ’s Retreat and you can explore it, climbing up through the skull, and right at the top there’s the Stone Glyph. That’s not in any way essential for the main quest, it’s a complete diversion, but it’s a lovingly crafted diversion that is amazing probably because there’s nothing there really that is essential. You don’t engage with it for a goal, particularly, but because of the love of exploration. It adds depth to the world, and I think this is largely because of two things. Firstly, it’s because of this lack of goal orientation (I wrote about this a little while back in relation to Far Cry 4). Secondly, it remains deeply ambiguous. I hadn’t played Legacy of Kain: Blood Omen when I played Soul Reaver so I didn’t know any of the mythos or background for it – it was just a big artificial skull lying in a desolate landscape and that just screamed “ATMOSPHERE!” at me. It’s like the ruins in the Forbidden Land in Shadow of the Colossus. They are powerful because you don’t know. Or like the subterranean Dwemer ruins in Skyrim, the real power comes from what isn’t there, not what is (for me actually, the Dwemer’s got increasingly less interesting the more I knew, the more my imagination was replaced by fixed mythos – which is a perennial problem with RPGs and the old school approach of chucking as much mythos at the screen as humanly possible, which is something – interestingly – the Bloodborne doesn’t bother with, but still creates a phenomenally powerful sense of place).

Likewise, The Forbidden Land in Shadow of the Colossus is amazing because it’s already gone, dead, there’s nothing you can do or understand. It draws its power from its ability to harness your imagination as a player because it doesn’t crowd it out. This is tried and tested in games – Bioshock relies on the gaps between the narrative beats – the lack of knowing exactly what has happened allows you to fill those gaps with your own interpretation. It’s the old horror adage that there’s nothing as scary as the monster you create yourself. Games might be awesome but they have nothing on player imagination.

Anyway, it was this absence and the power of inferred story rather than explicitly told story which led to a lot of the design decisions, particularly early on, in Rapture. The other major thing we wanted to look at – again as a replacement for the traditional model of linear story threads in a non-linear argument – was the idea of the discovered fragment that forces, or rather inspires, you to re-evaluate what you know about the world that’s been presented to you. This is trickier to achieve without resorting to linear narrative twists, which are a common enough tactic. It’s a filmic and novelistic conceit really, or at least, it’s an inheritance from those traditions, the reversal twists of films like Shymalan’s The Sixth Sense or novels like William Golding’s Pincher Martin. Whilst not going as far as that, most narratives do rest on the continuous re-evaluation of events and characters as our knowledge changes, but games tend to not be very good at this. It’s perhaps a result of the fact that most game dialogue still tends hover around the descriptive level, not pushing for more poetic or ambiguous language, so the subtleties get lost. This is exacerbated by the majority of game narrative being tied to pushing the player on, or providing a narrativised wrapping for actions. The oldest gameplay function of story being to create a framework for repetitive activity that if not actually cloaking the repetition, gives us a get-out suspension of disbelief architecture so we don’t get bored of just hunting down and pressing the Big Red Button for twenty plus hours at a time. This is something I wrote about a lot when I did my PhD on First Person Shooters – if you’re feeling strong and can bear to wade through a lot of academic stuff, there's a lot more detail there.

What I really love about game writing is rarely the core stuff, the plot, the main thread, which can be great (actually, it’s rarely great, but it can be great and not always where you expect it to be, like Wolfenstein: The New Order which is my favourite game writing of last year, and criminally under-rated), but in the incidental narrative fragments. Metro: Last Light has some brilliant vignettes that just fall along your path – I’ve talked recently about the “Can you catch cancer” dialogue between father and daughter fishing, and there’s also the brilliant diatribe by the old critic just outside the theatre in Bolshoi. 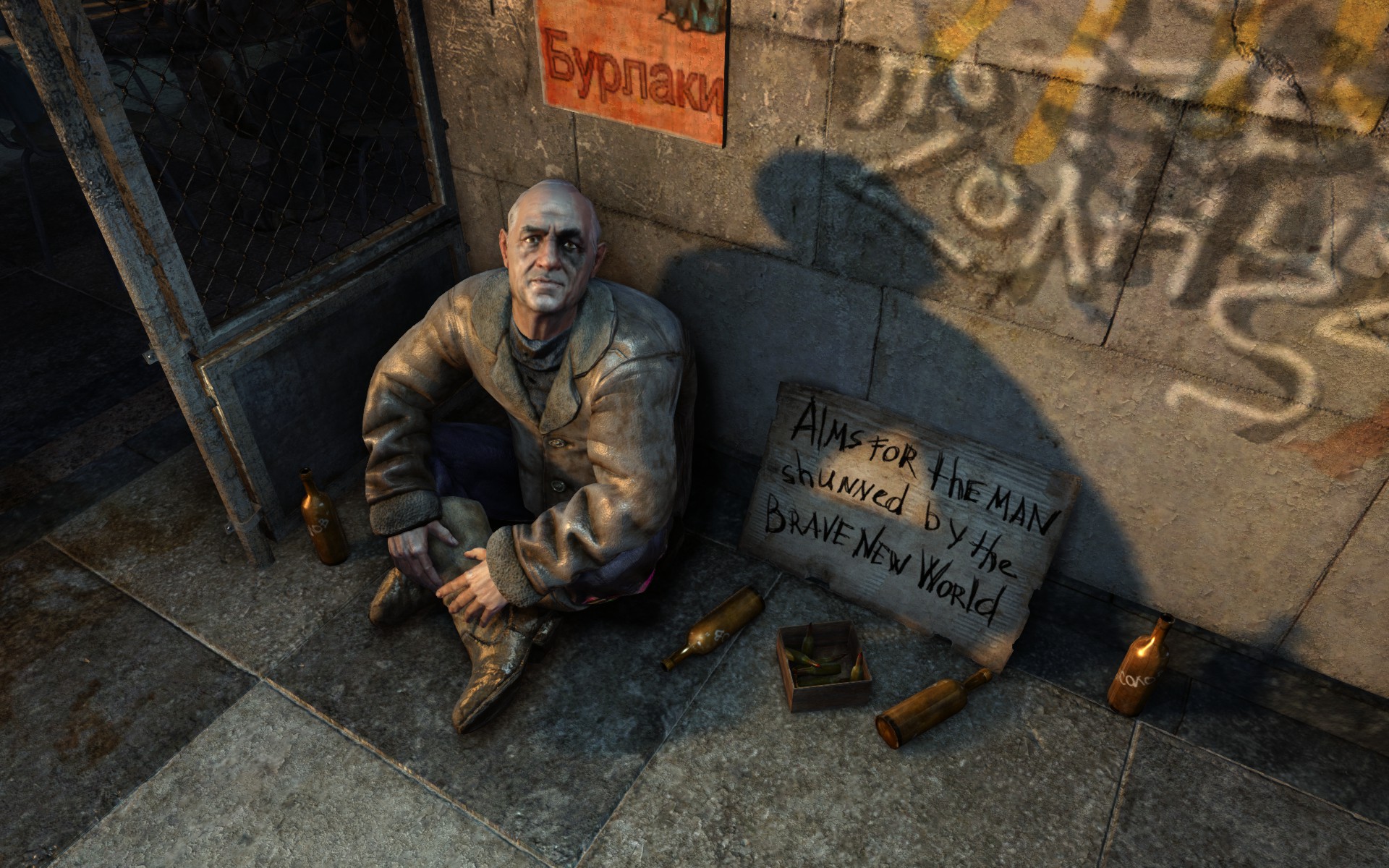 These moments might not be plot twists or reveals but the affect your emotional mood – this is the real power of environmental storytelling or, as Rob Briscoe once called it “emotional signposting”. Game story is not just good at telling you what to do next, or providing a bandage for it, it’s absolutely terrific at creating an emotional architecture that you carry forwards, changing the way you relate to or even interpret the game. Argo’s death creates a different emotional tone for the final Colossus, even if you strip away everything else. It matters. Your own anger and sense of betrayal at the end of Red Dead Redemption give the final sequence meaning – and the really clever thing there is, if you are like me, you are really hacked off at the game for putting you in an unwinnable position so there’s a genuine anger being co-opted by the fiction.

So anyway. Here’s the two key components underpinning what I wanted to do with Rapture’s story:

1)      focus on inferred story by foregrounding absence and inspiring you to use the most powerful tool in our design kit – your imagination – to create a story together (rather than offering what usually transpire as meaningless, frustrating branches where I’m actually forcing you to accept my inevitably limited reading of events rather than letting your imagination flourish)

2)      play down a central linear plot that is all about solutions, or tied to goals or serving gameplay as a mechanic, and create a space for those small moments that really create depth and a rich, full capacity for emotional signposting to be the core of the experience.

In other words – here’s the basic premise. It’s your story, as much as mine. We’ve been talking about this as a community and industry for a long time now, how your actions throughout a game, if it does its job of connecting to you properly, create a narrative. What still is the normal model however is that you have to wedge your story into the spaces left by a plot that is like an unwieldy oil tanker wallowing in rough seas, as it tries to force you into the correct emotional tone to justify the story itself. This is really wrongheaded. I’ve used the example of shooting Jen in Prey before, where the game was so desperately heavy-handed and clumsy in its attempts to make me feel sad, the whole thing became unintentionally comic. I had a similar experience at the end of Far Cry 4 when I took great pleasure in capping Sabal on the basis that I was so sick and tired of the hamfisted ‘oooh, but every moral decision you make has a counter-argument’ crap I’d been hosed down with for the last few hours. I sided with Pagan frankly, because he was only person in the ENTIRE COUNTRY who wasn’t serving up a moral lecture EVERY DAMN OPPORTUNITY HE GOT.

I wanted to write a story that left you free to form your own emotional connections that let the core of the experience be about how you felt about what was going on, that didn’t restrict your imagination to branches or a pre-defined slot, and where what you found and how you felt about it was given room to breathe. A genuine collaboration between the game and your imagination.

We’ll find out in just a couple of months whether or not I managed it, I guess.