How Doom Eternal Owns the "Contrivances" of Video Games

GAME DESIGN ROCK STAR SHIGERU Miyamoto doesn't think of Mario as a hero, or even a plumber. Mario is a performer. Over the course of his virtual career, Mario has played a carpenter, a plumber, a superhero, a supervillain, a go-kart racer, a referee, an athlete, a toy, and much more.

Positioning Mario as an actor allowed Miyamoto to avoid pigeonholing him into one type of game. Nintendo's mascot can leap bottomless pits and kick turtle shells at glowering mushrooms, or be chased across the desert by an angry sun, or play a friendly game of tennis against Bowser, or race motorcycles on tracks that defy the laws of gravity. Of course he can. The Mushroom Kingdom is not a real place. It's a theater stage, and the games in which Mario performs are elaborate sets.

Id Software has taken a slightly different approach to Doom since it premiered and brought university and business networks to their knees in 1993. Those classic games took place in areas themed after settings that designers conjured up in level editors. Far-flung installations on the moons of Mars looked realistic within the confines of 1993's computer technology because, in the game, they were real settings. In Doom 3, creepy installations and the barren surface of Mars exude even more realism. They had to: To sufficiently terrify players, id's artists and designers had to make Doom 3's environments seem as solid and authentic as possible. 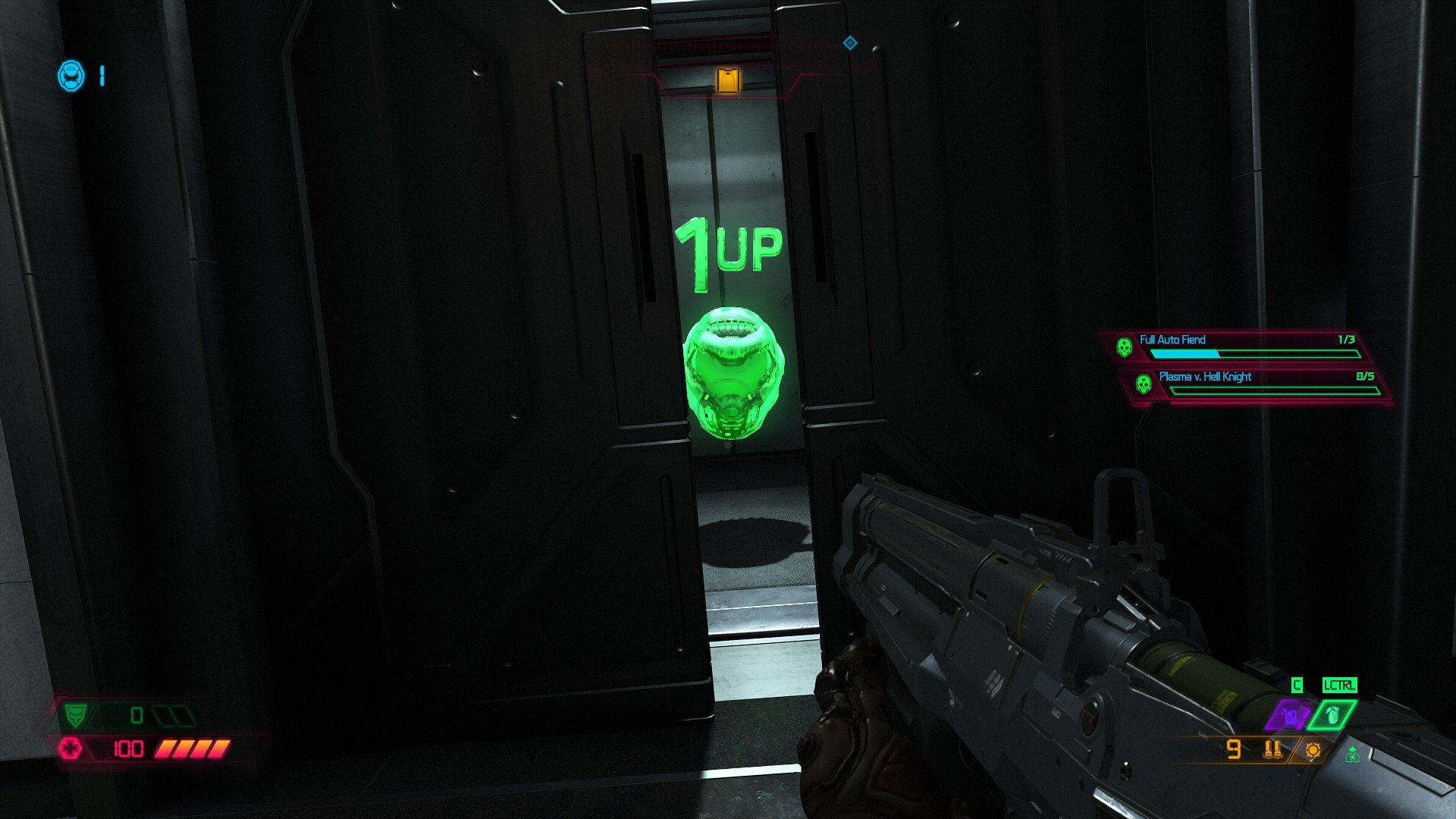 Doom 2016 followed in the footsteps of those giants. Aside from wall panels that open to reveal bright, pixelated levels from older Doom titles, 2016's creators rooted players in their setting. To them, it was real because it felt real.

That, Hugo Martin and Marty Stratton decided, was too much of a constraint.

"What we said was it was like a Nintendo game with brutal combat," said Martin, elaborating on his analogy for id's approach to designing Doom Eternal's game systems and levels. "What that means is, embrace the fact that you're a video game. Capitalize on what your brand can do, that other [games] can't do."

Some games can show 1-Ups floating in midair. Super Mario Bros. can do it. The Last of Us, 2013's gritty survival game by Naughty Dog Entertainment, could not. Doom games may let players race around at 90 miles an hour, but in the past, each game's environments, monsters, and other trappings had to feel grounded in id's established universe to be immersive.

But the more Martin ruminated on the word immersive, the more he knew the term applied to Doom in the same way it applied to Super Mario. Developers used immersive as a shorthand way of describing their game's tone as consistent. Players are placed in the universe of a video game and should remain there for the duration of the adventure. A deviation from that universe's conceit is as jarring as the uncanny valley effect in a film.

"In that sense, we're absolutely immersive, and it means we can embrace being a video game by communicating to the player very clearly," Martin said.

To embrace being a video game, Doom Eternal would deviate from the methodology of every previous Doom title. More Super Mario Bros., less The Last of Us. The game's approach to highlighting items illustrates this approach.

Doom Eternal's developers intended to ask a lot more from players. More enemies, more attacks to learn and counter, more weapons and mods and abilities. For players to rise to the occasion, Doom Eternal would have to communicate information clearly, all while players move at Doom's famous high speeds. The flame belch is a new ability that sets enemies on fire, but inflicts no damage. Instead, monsters drop bright-green armor shards while they burn.

"You see how bright that armor is," Martin explained. "That visual feedback, in a split second, tells you, 'You're doing the right thing.' The game is so fast. Sometimes you just spot those for a millisecond, but you still know, 'okay, I'm getting armor.' It's been liberating to work that way. It's how we can get the most out of the Doom brand and make a really engaging experience."

Color-coding goes beyond armor shards. Health gleaned from Glory Kills glows a soft, baby blue. Weapons hover in midair, like in Quake, coated in a toxic green that demands the eye's attention. Each type of ammunition--shotgun shells, rockets, plasma cells, and so on--has its own color so players can recognize it in the heat of combat. "There has to be some visual information, some detail to the asset," Martin continued. "But you need to be able to know from across the room, 'That's plasma ammo. I've got plenty right now, but I know where it is, so later on in a fight, if I use too much plasma, I can find it again.' It's all about communication, which is key in a game like Doom." 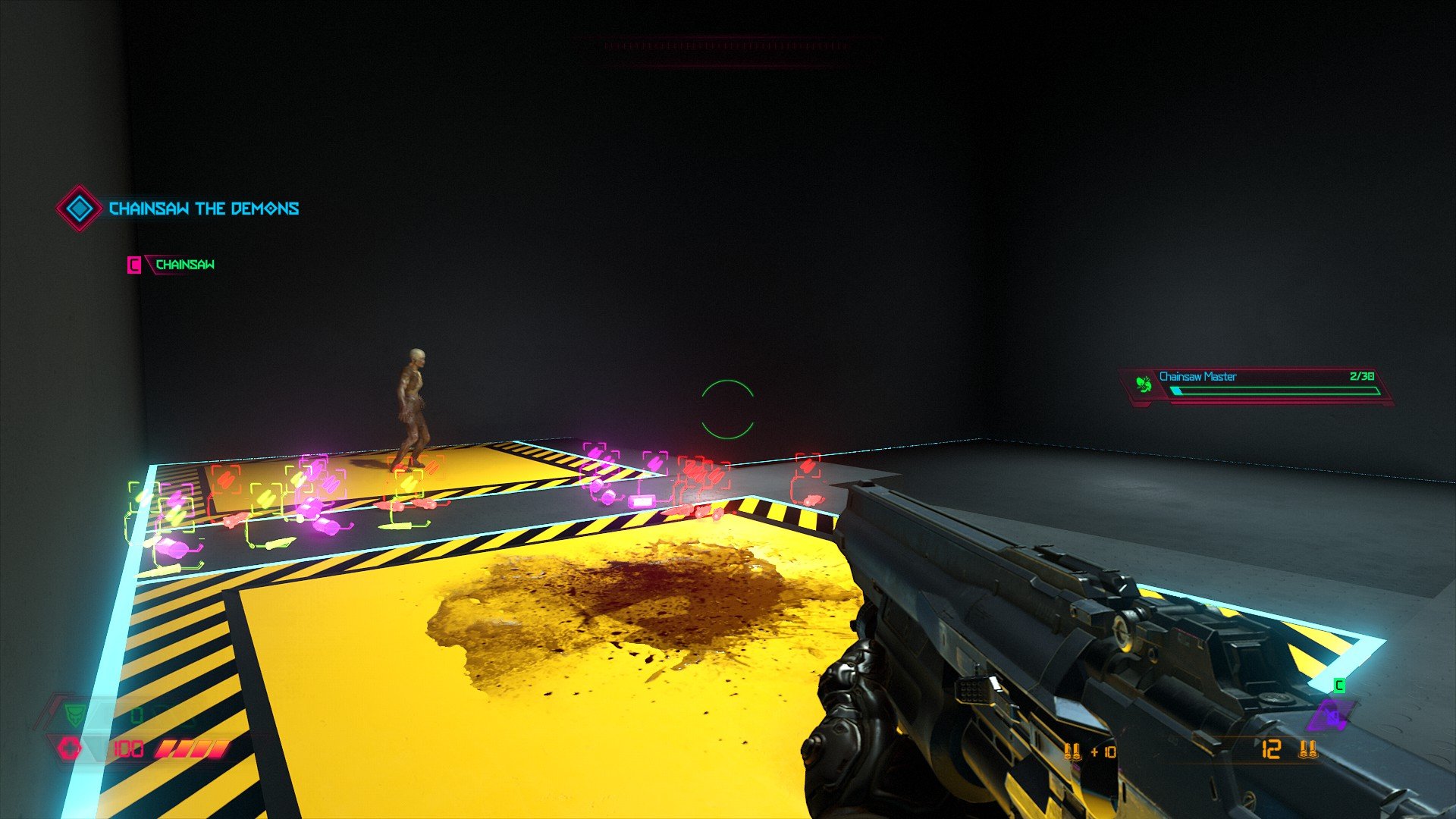 Although not all items glow, each comes in a distinct color and shape designed to be instantly recognizable. "We always talk about the original games being an inspiration, too," Marty Stratton said. "They're a great example with the way items stand out in the world."

Several items return from classic Doom. Vials of blue liquid boost players' health up to 100 (rather than nudging them across that amount, the way they functioned in the past). Helmets modeled after "Doomguy's" trademark outfit boost armor in larger amounts than the shards players receive by roasting demons, but are rarer. Health packs return as well, starkly white boxes with the Red Cross emblem plastered on their fronts.

"Everything in the original Doom stood out," Martin said. "You knew a health pack from across the room."

Items reminiscent of Doom and Doom 2 were not brought in whole cloth. To represent them in Doom Eternal, id Software's developers had to consider the circumstances under which the studio's founders had built their games. Doom's environments were colorful for the time, but lacked the intricate details and broader color palettes of contemporary games. In contrast, Doom Eternal's environments are much more intricate and in-your-face in their use of colors.

"That's why our stuff has to be bolder in some ways," Martin explained. "There's a lot of information in our environments, a lot of art detail."

While the circumstances around classic items has changed, the thrill players received when they spotted scarcer resources such as rockets triggers the same adrenaline rush now as it did back when.

"That's just a universal thing you can apply to Doom Eternal that still feels right," Stratton said. "It's just Doom. The team going back, and Hugo going back, to really dissect that stuff, breaking it down to its fundamental 'why' and bringing that forward by applying modern conventions, is really what makes it work."