Getting Players to Care - Part 3

What makes players care about a game's goals and characters? Dan Felder dives into a ten week series of game design experiments to find out!
Game Developer
Staff
January 08, 2014

Previously on, "Getting Players to Care"
I talked about all sorts of interesting stuff and laid out the foundation for this article series. Each part leads directly into the next and explains what the heck is going on. If you haven't read a previous part, check out Part 1 and skip along merily through my linear corridor of an article-design. I'll work on a non-linear article series next time, I promise.

So how did that experiment I talked about last time turn out?

In order to test if the Mother Teresa Effect was a valid way to Create Emotional Investment in games, I designed the following scenario.

The players would be tasked with the mission of saving a humble village from a horde of zombies. A haunted house had appeared near the village and was radiating evil magic, summoning the monsters that were attacking the village. The only way for the players to save the village was to enter the house and destroy the villain. The longer they delayed, the more villagers would die.

However, when the players finally made it to the villain’s chamber they discovered the crucial twist. The villain had captured five innocent villagers and was slowly draining their life force in order to increase his power.

The players would be confronted with a horrible choice. As long as the villain could drain the life force of the villagers, his powers would be vastly greater than otherwise – putting the players in terrible danger. Not only might the players die in the battle, but also if they failed to defeat the villain the entire village might soon be slaughtered. However, if they killed the five captured villagers – the villain’s power would diminish and they would both increase their own chances of survival (acting in their own best interest) as well as protect the greater needs of the rest of the villagers.

I ran this session for a group of seven players of ages twelve to fifteen. When the group reached the villain’s chamber and saw the hostages, I was careful to describe them only as, “five innocent villagers”. I gave them no names, no distinctive features, no description at all other than those three words. I wanted to make certain that they were a faceless abstraction for the players to think about.

A short debate ensued amongst the seven players as they decided whether to kill the innocent villagers or tackle the villain head-on. After about ten minutes of deliberation, the players unanimously agreed to kill the villagers in order to have a better chance of saving the rest of the villagers still under attack. The issue of their own survival was also brought up, as was the famous Star Trek quotation, “the needs of the many outweigh the needs of the few.”

However, as the players approached the hostages I threw my second twist into the situation. As one of the players moved next to a villager to strike the killing blow I told them, “As you come closer, you recognize one of the villagers. She’s a young girl named Sarah, about eight years old, the daughter of the baker who owns the inn you stay at. Sarah often sneaks you pastries from her father’s shop in exchange for hearing tales about your adventures, something that often gets her in trouble with her father – but she keeps doing it anyway because she loves to hear your stories. It seems she’s been captured and is lying, unconscious, at your feet – her life being drained by the necromancer.”

The reaction of the players was stunning. This was the first time that any of the players had heard of Sarah, they had no knowledge of her existence before this moment, yet players who had mere minutes ago decided to kill the villagers were suddenly shouting, “We have to save Sarah!” The group did an immediate reversal in policy, taking less than five minutes to unanimously agree that they’d do their best to keep Sarah and all the other captured villagers alive.

I could hardly believe their reaction. A few sentences giving a personal identity to one of the villagers took the players from being emotionally distant enough to commit murder to such a deep emotional investment that they were willing to risk their lives and the village itself in order to save her. The emotional appeal of Sarah outweighed the emotional appeal of an entire village along with the self-interest of the players’ own safety and the security of their reward. After all, if the village was destroyed there would be no one to reward them for defeating the villain. It was time for battle. 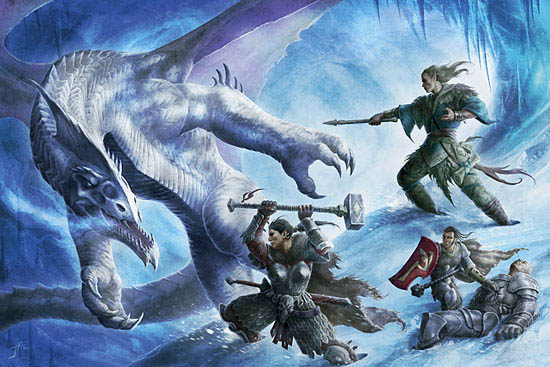 However, the reaction proved even stronger than I initially believed. As the battle progressed, the players suffered terrible damage from the empowered villain’s attacks. I suspected that feeling the pain of the strengthened boss might cause the players to change their minds, and slaughter the innocent villagers after all. Interestingly, something else happened entirely.

Over the course of the battle one player, new to tabletop gaming, was reduced to exactly two hit points. Hit points are a measure of a player’s health, and when a player reaches 0 or fewer they are in danger of dying. In tabletop gaming, dying means much more than it does in a videogame. If a player’s character dies – that character might be permanently gone, the player forced to create a new one. Alternatively, a significant amount of money might be spent to pay for a resurrection; but the stigma of having died comes with its own penalties. Dying is a terrible experience in a tabletop adventure and players absolutely dread it. Having only two hit points remaining meant that the player was in terrible danger of this happening to him.

The player’s posture slouched and he began to moan that his very first character was going to die. To cheer him up, I reminded him that his character still had a single healing spell left – which could get him back up to fighting form. The player immediately brightened and exclaimed, “Right! I’ll use it on Sarah!”

“Yes, she’s unconscious and her life is being drained away.”

“Perfect, I’ll cast Healing Word on her.” He smiled, suddenly delighted again. I couldn’t believe it. This player was suddenly willing to see his character die in order to help a single girl who couldn’t hope to repay them in any way. What was more; this was a girl who they had been ready to murder before she had a name. In fact, the group cared about Sarah so much that I was forced to improvise a new section of the adventure – during which the victorious players returned Sarah to her father and he thanked them profusely with a lavish pastry-filled breakfast.

The application of the Mother Teresa Effect was an astounding success in Creating Emotional Investment. After first establishing that the players were inclined to kill the villagers while they were faceless, establishing a single one of them as a specific character they had a reason to like provoked an emotional investment so powerful that at least one of the players was willing to give everything up in order to save her, while the rest vehemently and unanimously rallied to defend her against their own best interests. This result, combined with the Rokia Study, firmly established the following principle for my model. When it comes to emotional investment, the plight of the one outweighs the plight of the many.

Therefore, the most powerful stakes for Creating Emotional Investment are when the outcome of the conflict will dramatically effect a single character the player cares about. The issue itself may affect more than one person, but it should be presented to the player just as the issue of poverty was to the subjects of the Rokia Study – through the plight of a single individual.

Later, we will see that failing to understand this core principle was one of the key elements that led to Mass Effect 3’s spectacular negative response.