You do not have to model a complete functioning city to have a believable urban environment for your game. All you have to do is simply imply the appropriate size and complexity.
Konstantinos Dimopoulos
Blogger
June 24, 2016 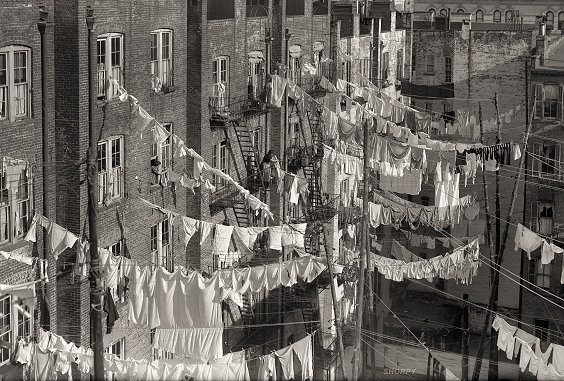 Let's imagine for a moment that you have created a unique, believable, sprawling, and impressively detailed metropolis. You have it mapped out, thoroughly described, and have its architectural styles all sorted out. It's a unique, beautiful, and complex place, and you are rightfully proud of it. Only problem is that realizing all of it on screen would probably cost you a few million dollars/euros/pounds/what-have-yous.

Assuming you are neither Blizzard nor Rockstar, you'll thus have to try and keep things as simple and cheap as possible -- your ability to create assets will always be limited. Chances are you will have to abstract and generalize your world, decide to move to 2D, avoid creating an open-world, or to even allow exploration and gameplay in only a handful of locations. As you will not be able to show the full size and complexity of your work, your city, you will simply have to imply it.

Now, take a look at the picture above if you will. Notice how few buildings are actually shown, and ask yourself whether this could be a village scene. Or even a picture taken in a small town.

It could not. Of course, it could not. You know, possibly without exactly knowing why, that this is a picture depicting a part of a big city neighborhood; most probably of a 20th century metropolis. You might only be able to see a tiny part of said city, but this sort of density, and this kind of spatial organization couldn't be found anywhere outside a big urban centre. A town or village would neither be able to support it, nor would they need it.

What's more, said picture provides the viewer with even more information. Information that goes beyond the type of urban agglomeration we are looking at, and lets us feel the living texture of the particular place. A thousand little stories, some of them possible only in this particular city, have left their mark on the hanging clothes, those buildings, the women, and even the wires we see, while the organization of everyday life itself and the class-based nature of those tenements is instantly obvious.

Small urban scenes and carefully selected areas, you see, can work brilliantly in implying size, complexity, urban function and texture, and in letting us conjure images of everyday life. In showcasing our elaborate creation in an easy to summarize way. Provided of course, there is a sensible backstory of our city, and an imaginary or real geography to draw upon. It's incredible how the existence of a city plan, regardless of whether it's ever used in its entirety, can help lend even the tiniest of places character and, once again, imply size.

Here is a screenshot from the wonderful Blackwell series: 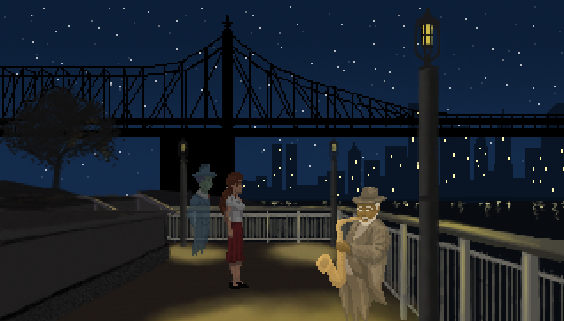 It is, admittedly, based on a very real place, but only a well thought out and decently mapped imaginary (or, indeed, real) city, would make it easy to calculate what the view from a particular position would look like, and to decide upon the street furniture. Besides, not every place sports ghostly jazz musicians, and only a metropolis of certain wealth would be able to both afford and need such a bridge.

Infrastructure, bridges and roads in particular, but not exclusively so, are another means of instantly conjuring images of massive urban formations. You don't see many places with the road and mass transport networks of big cities, and it would be sensible to assume that a huge, multi-tiered bridge close to the home of an important NPC, would imply said NPC is an urban dweller.

Admittedly, as cities are incredibly complex and dynamic entities, and as bigger cities are even more so, tricking players into believing that a handful of locations or a vastly abstracted open world setting are functioning, living cities, can be done in a myriad of other ways too. Ways that can and should be combined with each other, without obviously ignoring rather crucial matters such as the ones already mentioned.

We can have players travelling through space (but only looking at it via the highly controlled and easy to manipulate view of a car window) long enough to make them feel the sheer enormity of things, we can present them with architectural creations designed to daily service tens of thousands, we can model and properly arrange a few buildings in relation to each other, and obviously we can provide them with maps. Actual in-game maps.

Possibly like the one from the original Gabriel Knight: Sins of the Father, which, combined with the excellent and highly atmospheric locations, gave adventurers the illusion of exploring a huge chunk of New Orleans: