An approach to urbanism as a storytelling tool, and the story of the urban design of adventure/RPG Nékromegà's opposing cities.
Konstantinos Dimopoulos
Blogger
February 03, 2017 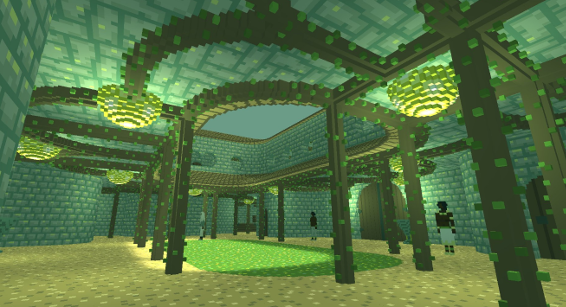 Nékromegà, a game by lectronice powered by the RPG In A Box engine, is an unexpectedly ambitious freeware project, and also a 3D, voxel-based, adventure with RPG elements, that has already had both a long pre-production phase, and an accordingly longer production one. Hopefully though, Nékromegà will grow up to become an actually released game with an engrossing story to tell, vibrant cities to experience and possibly sack, clever mechanics, a unique take on undeath, and some very harsh yet cunningly subtle words about colonialism.

Provided things do not change in a cataclysmic manner, players will get to play as Bàmoq Cxohàmon, a young citizen of Suùn and eventual priest of Sleep. Torn between his family and his motherland's conquerors, Bàmoq is used as a tool by two not equally evil sides, until deciding that speakers of the language of the dead can actually take matters into their own desperate hands. Possibly even bring whole empires down. Or, you know, enjoy some city sight-seeing along with an army of well behaved undead.

Now, having worked quite a bit on the game's urbanism, I do hope said sight-seeing (and possible sacking) will be worth the players' time, and that the game's urban centres will be evocative, intriguing, and rich. We have attempted, you see, to not only come up with believable, immersive, and exotic ideas for the cities of Nékromegà, but to also use them -- their image, their structure, their form, their feeling -- as storytelling tools. As grand environmental storytelling devices.

The first step towards achieving what I believe to be effective and implementable city designs was, of course, closely working with lectronice on the world building itself. Getting to both thoroughly understand and even influence the setting was incredibly helpful to me. There was a crucial interplay between city, world and game design, that informed all aspects of Nékromegà and actually uncovered new ideas, and unexpected solutions.

Said dynamic back and forth, said continued discourse, was the main force shaping a very interesting and realistic fantasy world sporting some, hopefully, completely original elements. And it also got our excellent and ever-evolving RPG In A Box voxel engine to impress everyone by allowing for walls like these: 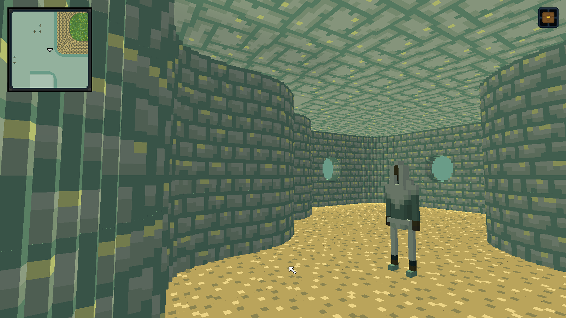 Curves aside, lectronice and I had lengthy discussions regarding the cultures of the Suùn Archipelago and the Bohr Imperi; that is, about the two opposing and vastly differing nations around which the game's setting, central conflict, and story were constructed. Happily, we couldn't help but agree that one of the best ways of showing said differences would be to let two vastly contrasting cities explain things for us.

Obviously, different architectural styles would have to be employed, but, more importantly, we would have to express fundamentally differing spatial organization and space creation views. Showcase the planning mindsets guiding the evolution of each city, as these mindsets would express important aspects of the societies that gave birth to them. A small, almost class-less, self-contained matriarchal collective, and a huge and ever-expanding proto-capitalist empire simply cannot regard urban space in the same way.

It was all about manifesting contrast in a realistic way, and making said contrast evident as an expression of the built environment via city planning. Admittedly nothing can sum up contrast better than the juxtaposition of  fundamental shapes. In our case it simply had to be circles versus squares. Not only are those ur-shapes instantly opposing to each other, they felt very appropriate too, as each one could intuitively imply differences in beliefs, goals, and even societal and ideological relationships to nature.

The Suùnian people live in a peaceful, generally fair society, where equality and harmony are both the norm and a core value, whereas the Bohr are stuck in a highly competitive class system the hierarchy of which is literally defined by personal wealth. So, the Suùn would get a city with soft round shapes carefully adapted to their idyllic environs, and the Bohr would have to go for sharp, functionalist shapes that, though definitely not fascist by definition, are at least emphatically industrial.

Round shapes have the added advantage of their historical association with matriarchy and actual proto-communist neolithic settlements, but they cannot define an urban geography all by themselves; let alone map out a functional topography. As the Suùnian civilization was supposed to be spread over an archipelago, tackling the topography and physical geography of the place was first on my list. Based on lectronice's descriptions I came up with an early sketch; mainly to get things started and placed on a map. 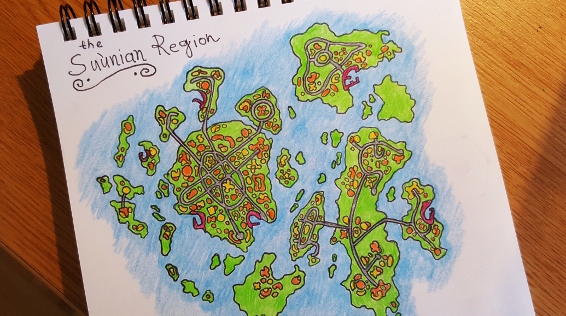 The initial placement and shape of settlements made decent sense both geographically and when taking the RPG In A Box engine into account, and even though the region's topography would have to evolve quite a bit from this early concept to include such elements as huge desert islands, and some geological storytelling, this first core sketch really helped us. It provided the basis on which we designed and built the cities -- towns, actually -- we needed to.

Speaking of engines, and thus also engine constraints, the main problem we (well, lectronice) faced was that voxels are by definition cubic. This made the construction of circular or curved buildings rather taxing technically, but apparently lectronice did manage to overcome those barriers. Besides, even non-circular buildings or architectural elements can be arranged in circular patterns on a city planning level, and sometimes the effect of rounded corners is more than enough. 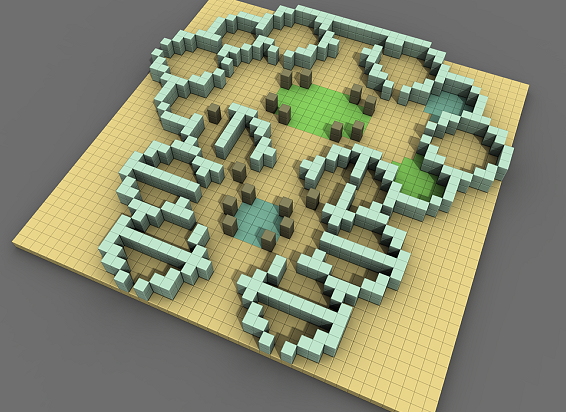 Alderhil, on the other hand, the imposing capital of the Bohrian dystopia, solved many of its technical problems by following the path of rectangular functionalism, and a planning logic of utter efficiency and strict divisions. Even though it was a city that would have to be designed in its complete and (sensibly) detailed whole, all it took was a few early sketches, and then inspiration struck. An original concept that would instantly define the city appeared. Alderhil would thus look a bit like the following sketch, which already implies its stark class divisions, production focused ideology, paranoid defenses, obsession with symmetry, and complete disregard for the nuances of the environment. 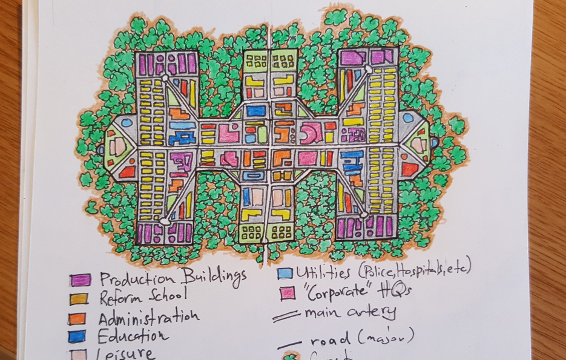 All the plans, cross-sections, and descriptions that followed never really altered the core of this design. It was, we felt, perfectly oppressive and anti-egalitarian, built for the comfort of the elite and the efficiency of the workers. The working poor were compartmentalized along with major production facilities in the east and west parts of the city, and would have no access to the outside world except through the two main gates at the north and south of the central, administrative and monumental, district.

The Imperi's architecture, a sort of weird Brunelleschi-inspired wood/timber-punk with hints of Stalin-Gothic, would help emphasize a perfectly planned, geometric, and imposing city. Such a city would be both perfect for our voxel engine, and LEGO bricks would in turn be equally perfect for its physical representations. 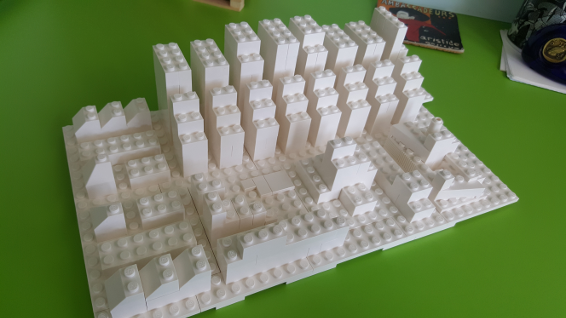 As Alderhil was set in the mountains, and mountains unlike your average archipelago are less of a hassle in the topographical department, getting the physical geography right was relatively easy. The Bohrians' utter disregard for the environment and their tendency to level things was also helpful. Not that eventual plans didn't include a much more detailed topography, or that a flattened city in the mountains wouldn't feel imposing in 3D... 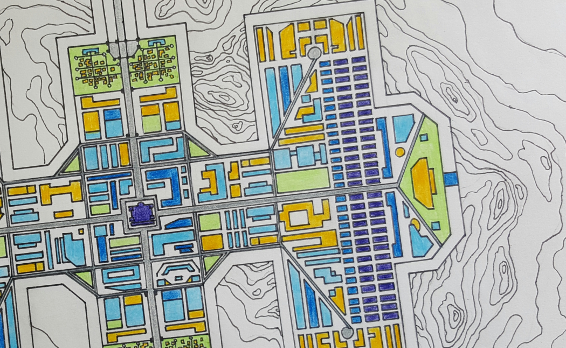 And did I mention that Alderhil was to come complete with a functioning undercity? Well, it was. As you'll hopefully see in the finished game, it's a rather sensible and definitely horrific underground city with cisterns, living districts, markets, some mining tunnels, factories, and the odd death pit. Frankly, it will have to be a horrible place for workers, the undead, and undead workers, but also a central part of the city's defenses including the bunkers of the rich, secure administrative facilities, vaults, etc.

It should be quite the dungeon too, and was actually a joy to plan and map out. Working with visual artist Maria Kallikaki to create the finished map of the undercity as it will appear in-game was, admittedly, even more entertaining, and on that high note, I'll leave you to actually go and do some work. 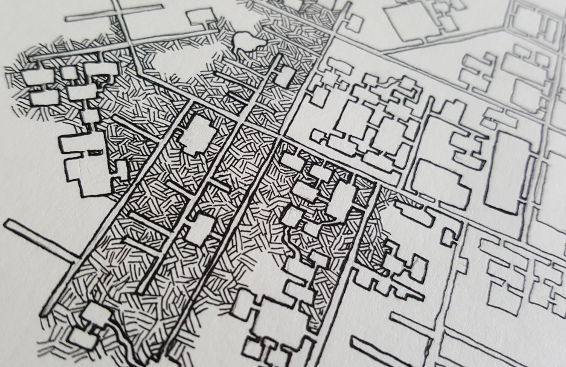