SEARCH
A minimum of 3 characters are required to be typed in the search bar in order to perform a search.
Design
32 MIN READ
Featured Blog

Fragments of Him prototype - designer's post-mortem: Scope, sexuality, and scripts

With a time limit of three days, an emotional narrative, multiple in-game locations, and issues of sexuality, it was going to be a challenge controlling the scope of the Fragments of Him prototype. This post describes how we did it, and what we learnt.
Mata HaggisBurridge
Blogger
February 21, 2014 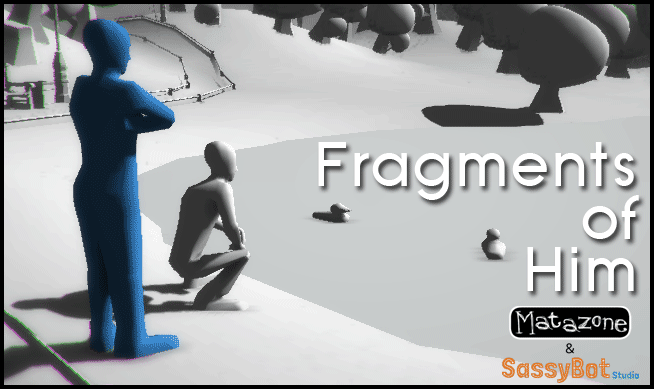 A little over nine months ago, Elwin and I put our faith in Dr. Mata Haggis as he proposed that we should make a narrative game for the upcoming Ludum Dare game jam challenge. Ludum Dare is an online game jam event where developers around the world create a game, either alone or in a small team, under great time pressure. These games are encouraged to follow a theme that is announced at the start of the event.

The game that Mata had in mind was to be a narrative game. With the little game jam experience we had back then, we knew the scope had to be manageable if we were to finish the game at all. Mata explained we needed 3D characters, fully decorated indoor and outdoor scenes, several written and voiced dialogue lines for multiple playthroughs, and shader magic for some of the interactions. As you can imagine, we told him he was mad.

As with any mad doctor, he convinced us that this could be done and we were willing to give him the benefit of the doubt. In retrospect, the faith has not been misplaced. As of this writing, Fragments of Him has been played over 28.000 times on Kongregate with a rating of 3,7 and received 4th place in Ludum Dare’s mood categoryout of 736 entries. It’s the responses in the comment section that personally thrill me the most. These responses convinced us that there is more to be done here. With Fragments of Him funded it might be a good idea to reflect on how the initial prototype came to be.

We are still very early in development and we do not want to reveal too much. What we can share is the complete post-mortem of Dr. Mata Haggis (@MataHaggis) , written roughly a week after the game jam. It takes you through the process that Mata used to create the prototype that is the foundation for the upcoming full version.

All text onwards is written by Dr. Mata Haggis.

My name is Mata Haggis and I was the narrative & game designer/producer on the Fragments of Him prototype, our entry to Ludum Dare 26.

Since creating the prototype that this post-mortem discusses, Fragments of Him has been given funding from the Dutch government to go ahead into a full game experience. We look forward to sharing the progress on that project in the future, but in the meantime we hope that you find our lessons from the prototyping stage interesting!

I had never done a game jam before, so this was a new experience for me. I was fortunate enough to have two talented developers ask me to join their team. Between us we created a narrative game experience with one programmer, one artist (and his 3D modeller girlfriend for an evening), and myself in only 72 hours.

Below you will find out what a narrative designer does on a game jam, what a producer can do, and a little more about the decisions that I made when creating the title.

Before we go any further you should play the game:

Seriously. I mean it. This post will have a lot of spoilers very soon, so go play the game now and come back in 10-20 minutes when you're finished.

Okay, let’s talk about the process…

The theme was minimalism, and I wanted to do a game with a very prominent story in it. I worked on several ideas in my head, but the one that stuck was investigating why a person would choose to live in a minimalist style in their house. The result of this was the idea that the lead character had lost their partner and couldn’t stand to be reminded of the loss.

In narrative terminology, the loss of the partner would be referred to as ‘the inciting incident’. The process of creating minimalist spaces gave me a gameplay mechanic too.

I pitched the concept to the team – one artist and one programmer – and I was fortunate that they were enthusiastic about it. There were several key decisions that are worth examining here:

In terms of showing figures in the environment, again I needed to keep a close eye on the scope of the project. I asked the artist to create one generic character model which would be used for both the protagonist and the dead partner. In every scene, these figures would be posed in a tableau (a static pose that suggests narrative action). In this way we could give a powerful idea of character relationships without the difficulty of animating figures.

For the programmer, there were a few challenges that I had to consider. The audio and subtitles would need to be displayed, there would need to be highlighting and signposting of affordances, and the most difficult task was probably going to be the final scenes where the gameplay mechanic (clicking to remove objects) is reversed. By keeping these interactions very simple, I could limit the complexity of the task that I was giving to the programmer.

I voiced the lead character of the game, and I am male. In the game, the character talks about his dead boyfriend. I felt that the story would work perfectly with either a male or female partner character, but I also feel that non-heterosexual relationships are under-represented in gaming, and so I had a preference for making both characters male.

I described the outline of the story to the team and they had no feelings either way on the gender of the partner, and so we ended up with a story about coping with grief, where the lead characters happen to both be male.

When stories are told about the death of a non-heterosexual man (it is not defined if he was gay or bisexual), they often focus on stereotypical perceptions of gay lifestyle choices: drugs, promiscuity, clubbing, and of course HIV/AIDS. I didn’t want to tell a gay love story; I just wanted to tell a love story.

I know that the audience for any story will be predominantly heterosexual, with then lower proportions of gay, bisexual, transgender, and other queer-identifying players. Part of my goal was to ignore the non-heterosexual elements and to write a story that anyone could relate to; in doing this, I wanted to completely normalise the lives of the men. To do this, I choose to focus on the small and relatable things in people’s lives.

I suspect that anyone who has had a break-up, especially after living with a partner, can relate to the quiet sadness of removing one towel from the bathroom.  I think that feeling of sorrow is a universal experience that has nothing to do with sexual preferences, and that is what I wanted to convey in this game. In doing this, the sexuality of the characters became irrelevant in the sea of everyday memories.

As a side-benefit to the choice of going for a homosexual relationship, the artist only needed to make one body and animation rig, saving him a lot of time in the game jam time constraints!

How to write a good story quickly

I’ve been writing for several years and have cobbled together a system which works well for me. I’ve based it on several sources, but the main ones are ‘Save the Cat’ by Blake Synder and ‘Will Write for Shoes’ by Cathy Yardley.

Neither of these are high-brow books on how to create your epic masterpiece, but they are very focussed on creating a tight, enjoyable story.

I put ideas from the books together and now here’s what I use whenever I start writing:

Before the inciting incident: ‘Save The Cat’

Show the life of the character before life goes wrong. The character does something that makes you like them (‘save the cat’).

Something changes that forces the protagonist to act.

What forces the protagonist to make this clear statement of their objective?

The protagonist is given hope that they can fulfil their external motivation goal, but only if they truly dedicate themselves to it.

I use this whenever I write and it’s working out pretty well for me so far!

In the case of Fragments of Him, as with other stories I write, I began from a feeling and worked back to an inciting incident. The feeling was a person clearing away all of their belongings to create a minimalist living space – why would they do this? This question led back to the inciting incident – the objects were related to grief at the sudden death of a partner.

From there I worked through the template, filling in the gaps. For Fragments of him, it looks like this: