Fear Of The Unknown, Part 1

The famous horror master is frequently cited in discussions surrounding the subject of horror and fear in video-games. "The biggest fear is fear of the unknown". That's correct, we do fear the unknown... But what, exactly, is the unknown? Also, how does this Fear of the Unknown work?

In this article we'll be exploring some of the different usages of the unknown in horror games, trying to have a glimpse of it's inner workings and, if successful, open a path to further analysis and discussion of the subject so we can step every time closer to having this figured out.

There will be things that are commonly known and normally called by different names, for example, imminence is dubbed "suspense", and hints of the unknown is dubbed "mystery" or "negative space". That's all true and also correct, but the usage of those terms won't help our studies of the mechanics of how fear is originated and nurtured from the point-of-view of everything being about information, which's what we're doing here. Also important to note is that all the considerations taken are based on observation rather than research, so feel free to come out and say that my assumptions are wrong about both the subject and the perceived misconceptions around it. It's an art and not a science after all.

Now, let's have some fun!

The entire field of analysis in this article will revolve around the many ways information can be withheld from the receiver and how each piece of existing or missing information can affect the way our brains deal with information. When you have excess of information your brain will filter the bits deemed unnecessary or unimportant and work at conscious level only with the relevant bits to whatever you're having to deal with at the moment. Similarly, when the amount of information you're getting is limited and deemed insufficient to give the sense of security to work with, your brain will enter a state that amplifies it's extrapolation capacities, hence "fear of the unknown" is interpreted as "your imagination is scarier than anything".

Three bits of information most commonly withheld from the receiver to create the unknown in horror games - and commonly asked by players when ranting or discussing about what makes a great horror game - are informations about:

b) Presence: the location or whereabouts of something, and/or the confirmation of it's existence in the game's world and/or in the player's vicinity – "that feeling that you're being watched", "when the door opened and there was nobody there", "the part when the wind blows the candles", "the foot noises in the upper floor"; and

c) Imminence: the threat and/or likelihood of an event happening – "you don't know when something will jump out at you", "the sense that the bridge was going to fall".

But is our imagination alone what we should fear most? If that's the case, I must tell you, the amount of things you don't know about the world outnumber the amount of thing you know by an nearly infinite number of times! How many unharmed units of edible fruit of any kind exist in the world right now? What was the distance between the place you are now and the south pole of Mars in 2:45 PM of April 9th, 1743? Where will the clothes you're wearing now be 2048 months in the future? What are the chemical elements made of dark matter? You don't know! MuaHaHaHaha! This is dread man! Truly dread!

Are you scared now? You should be! It's the unknown what we fear most, right?

But why is it we're not completely losing our sanities over this infinite number of matters we have no knowledge (information) of? "They aren't of any importance!", you must be saying right now, but the truth is, we don't even know if the things we don't know are important or not. But what if they are? What if our lives depend on it and we don't know? What if we knew all that at some point and for some reason it was all forcefully forgotten? If think about those questions seriously, things start sounding scary. That's because a full binary isKnown information doesn't sound relevant enough to warrant any consideration and from there, our brains won't get to the step where it'll calculate if the information received is plenty to supply our needs under the existing constraints of time pressure (perceived urgency), considered risks (perceived potential losses) and personal safety (perceived danger).

Only once hinted in the correct direction we consider the importance of not-knowing something. And you might have already guessed by my used of the word hint that it's not only about holding information, but also about about exposing information that renders the lacking information relevant. For easier referencing of this characteristic, we'll be calling the acknowledgment that there is a lack of further important information, by sense of unknown. Without the sense of unknown, it's virtually as if there's nothing unknown to begin with.

The catch is that the unknown is only present if we know about it. That's what the sense of unknown is. So the player must be teased into the fact that he doesn't know everything that should be known to increase his/her chances of making it out of the nightmare alive. Without teasing the player on the fact there is information of utmost importance being held away, one will not have a reason to fear it.

But here comes a problem: seasoned players will be used to games being "fair" by default, therefore if something isn't known it's not important information. If a horror game doesn't feature guns, what it's trying to tell you is that you can do it without one, therefore why would you be scared of being unarmed if the game will be balanced with that in mind? If a game has guns and plenty of ammo and suddenly locks you in a room with five monsters, what the game is telling you is that five against one is a fair fight, therefore why should you be afraid of them instead of them when it's instead them that should be afraid of you?

So how to keep the player from approaching the game with a happy-go-lucky attitude of simply not caring about what's not known? The solution this article is here to propose is the observation that knowledge is not only binary. It's by riding the line between known and unknown that we can give the player a sense of unknown, give it the meaning the want it to have and raise it's importance to the necessary levels that will focus the player into the helm of his own imagination.

Similarly as to how the information being withheld can mean many things, the ways the information can be withheld or exposed also differ and have different effects. And if they differ, we can categorize and label them for more clear usage.

The constitutions of information we'll be exploring in this article will be the:

a) Unknown: the binary lack of information - you either know it or you don't;

c) Uncanny: the presence of conflicting bits of information - you're not sure anymore about something you are supposed to know.

Note that information can also exist in different scales, we won't be exploring much about them as we'll leave this up to artistic interpretation and usage, specially because it's variable about what's the relevant information scale being dealt with at the moment. For understanding of what it means, you can for example see a person in the distance and not know which color this person's eyes are. That can either be a lack of information (unknown color of the eyes) or incomplete information (unknown details about the person as a whole) depending on what scale of importance is being considered. This aspect is very complex and varies a lot depending on context so it'll be a dimension we'll take for granted and leave apart while working on the other two already described. If any reader wants to complete this base-article with that, please feel free, and thank you!

In future articles we'll study examples of each combination – which are not necessarily the only elements  of the two dimensions this article is out to explore. 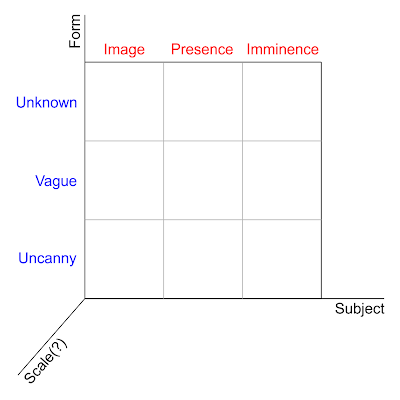 Can you fill each combination with events from Video-Games, Movies and Books?

Part 2 can be read here.

This article is a repost from http://luaudesign.blogspot.com.br/