[This article originally appeared on Game Design Aspect of the Month under the topic of Immersion.]

Primarily, several panelists expressed the opinion that worldbuilding shouldn't take precedence over story, or any other activity.  Worldbuilding should not become a full-time job.  It's far too easy for beginning fantasy writers to get caught up with the process of worldbuilding and end up with a beautifully realized world without a story.  In fact, the world can enrich the story, and even become an externalization of a character's emotional life. 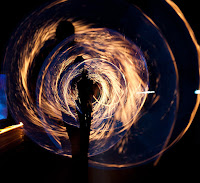 Next, the panelists discussed magic and magic systems, and urged writers to think about the cost of magic, as I do in my class, Writing for Sci-Fi, Fantasy, & Horror Game Worlds.  If magic didn't have a price or penalty, then what's to stop people from using magic all the time?  One panelist talked about the Harry Potter universe having 2 magic systems, one without cost and one with cost.

Finally, writers were asked to think carefully about the choice of POV character.  If Gandalf had been the POV character in The Lord of the Rings, then the story would be very different.  The reader would miss out on the feeling of wonder in regards to magic because Gandalf, as a wizard, would know all about the intricacies of the magic system.

Although this was a panel of comics writers, their advice applies to more than just comics writing.  But if you're interested in learning what game writers might have to say about the topic, follow Game Design Aspect of the Month for a write-up of the game writing panel at GameACon Atlantic City from October 28.

A writer and game designer, Sande Chen has over 10 years experience in the industry. She studied science fiction and science writing at MIT. Her first published game was the epic space combat RPG, Terminus, which won 2 awards at the 1999 Independent Games Festival. She was later nominated for a 2007 Writers Guild of America award in Videogame Writing for the dark fantasy RPG, The Witcher.