There's no such thing as a neutral system. How do we discover our own biases, and why is doing so important? This is a chapter from my upcoming game design book entitled "Empathy Engines: Design Games That Are Personal, Political, And Profound."
Elizabeth Sampat
Blogger
September 12, 2016

In 1977, Stanford social psychology professor Dr. Lee Ross asked a group of students to do a simple experiment. He explained to the participants a situation in which a conflict arose, and then gave the participants two possible options for resolving the situation. They were then asked to guess which option most people would choose, to choose an option themselves, and to describe the kinds of people who would choose each option.

Regardless of which option the participant chose, a clear pattern emerged: participants were more likely to assume that the majority of people would make the same choice as they did. This shed light on something Dr. Ross and his colleagues called the “false consensus effect”—  the idea that most people believe that their actions, beliefs, morals, opinions and habits are those held by the majority of people.

Additionally, the false consensus effect means that people think that those who do not think, feel, or act the way that they do are in the minority, and that those people have something wrong with them. In a second experiment, Ross and his colleagues asked participants to wear a sign that said “Eat At Joe’s.” 66% of those who agreed to wear the sign assumed most people would as well, and of those who refused, only 33% thought most people would agree. And when asked about the kind of person who would make the opposite choice, participants had harsh and extreme judgments about those people’s personalities. (Dean)

The false consensus effect is one of the most powerful cognitive biases we have to work against. It’s everywhere; one of the most potent examples in recent history is that of President Barack Obama’s clear and uneventful defeat of Republican nominee Mitt Romney in the 2012 presidential election. The pre-election poll data made an Obama victory clear, but conservatives were reeling in shock from the loss:


A few hours earlier, across the street at the Convention Center, the campaign’s supporters and volunteers fully expected Romney to be the nation’s next president.  Indeed, what was striking after Fox News called the race for Obama, at about 11:15 p.m., was how stunned so many of Romney’s supporters were.  Many said they were influenced by the prominent conservatives who predicted a big Romney win, and they fully expected Tuesday night to be a victory celebration.

“I am shocked, I am blown away,” said Joe Sweeney, of Milwaukee, Wisconsin.  “I thought I had a pretty good pulse on this stuff.  I thought there was a trend that was going on underground.”

“We were so convinced that the people of this country had more common sense than that,” said Nan Strauch, of Hilton Head, South Carolina.  “It was just a very big surprise.  We felt so confident.”

“It makes me wonder who my fellow citizens are,” said Marianne Doherty of Boston.  “I’ve got to be honest, I feel like I’ve lost touch with what the identity of America is right now.  I really do.” (York)

Especially with the decline of print media and the rise of online news and punditry, it was easy for the Romney campaign to double down on the false consensus effect. They assumed that every poll and pundit that said Obama would have an easy victory on election night was biased, either due to the specter of the “liberal media” or because they simply oversampled Obama supporters— but that mistake was the crux of their own false assumptions.


[T]hey believed the public/media polls were skewed - they thought those polls oversampled Democrats and didn't reflect Republican enthusiasm. They based their own internal polls on turnout levels more favorable to Romney. That was a grave miscalculation, as they would see on election night.

Those assumptions drove their campaign strategy: their internal polling showed them leading in key states, so they decided to make a play for a broad victory: go to places like Pennsylvania while also playing it safe in the last two weeks.

Those assessments were wrong.

They made three key miscalculations, in part because this race bucked historical trends:

1. They misread turnout. They expected it to be between 2004 and 2008 levels, with a plus-2 or plus-3 Democratic electorate, instead of plus-7 as it was in 2008. Their assumptions were wrong on both sides: The president's base turned out and Romney's did not. More African-Americans voted in Ohio, Virginia, North Carolina and Florida than in 2008. And fewer Republicans did: Romney got just over 2 million fewer votes than John McCain.

3. Undecided voters. The perception is they always break for the challenger, since people know the incumbent and would have decided already if they were backing him. Romney was counting on that trend to continue. Instead, exit polls show Mr. Obama won among people who made up their minds on Election Day and in the few days before the election. So maybe Romney, after running for six years, was in the same position as the incumbent.

The campaign before the election had expressed confidence in its calculations, and insisted the Obama campaign, with its own confidence and a completely different analysis, was wrong. In the end, it was the other way around. (Crawford)

In this case, the false consensus effect was compounded by the effects of confirmation bias (the tendency to only seek out information that reaffirms our beliefs) and selection bias (when a group of people is self-selected or otherwise non-randomized, but the beliefs or actions of that group is assumed to be an unbiased representation of the whole). Because the Romney team was unable to see their own biases— something few groups are able to do!— they ended up making the exact mistakes they assumed the Obama team were making when it came to their projections.

These kinds of biases aren’t inherently bad, and falling prey to them doesn’t make someone a bad person. In fact, these biases can be manipulated for great rhetorical effect in game systems designed with said biases in mind. That said, the false consensus effect is important to overcome when it comes to personal and empathetic game design.

You might ask: if the idea is to design a game that comes from my perspective, why would including my own biases and assumptions hinder that goal? It is specifically because we are all too close to our own lives that we are unable to see them effectively. By stripping away the assumptions that the constraints and systems you live with are mundane or obvious, you’re able to look at your life with a critical lens— and better understand how to simulate or critique it.

When we refuse to see our own biases, it becomes impossible for us to design games about experiences or perspectives that differ from our own, and we become more likely to fall prey to the lie of “neutrality.” To ensure that the message of the game is clear and consistent, and that the point of view being expressed by the systems of the game is in line with your goals as a designer, it is necessary to dismantle the invisible things that cloud your vision.

This is not to say that all bias needs to be removed before one can begin designing a game: doing so would be impossible, and the result would be boring. Instead, the goal of dismantling our own biases is to interrogate them thoroughly, and see what is useful and emotionally resonant within them. 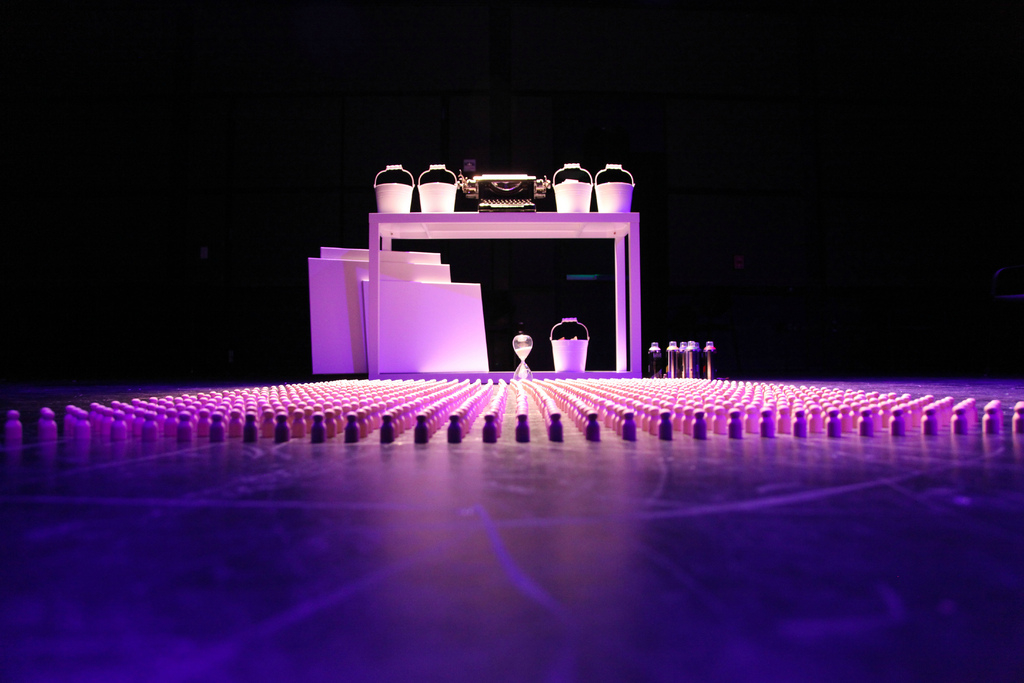 The only time a game is truly neutral is before a single decision about the game has been made. As Brenda Romero says about her art piece, PreConception (pregame notgame):

Every step of the game design process is about limiting possibility from an infinite number of paths and choices. Depending on our lives, our histories, our personalities and our educations, we each come to that infinite possibility space with a number of paths already closed off. After I designed my first tabletop game, a roleplaying game called It’s Complicated, a journalist told me in an interview that “it feels like an RPG designed by someone who had never played an RPG before.” I was initially offended, but through discussion I came to realize what he’d meant. Because the core mechanics and the narrative emphasis were so totally unique and unlike what most players expect from a typical roleplaying game, it seemed to him as though I had been untouched by those unconscious biases that often serve as the foundation of game design. The act of interrogation, then, is not just about deciding which paths to cut off— it’s also about stumbling on to paths that may have otherwise remained closed off to you.

Games are systems, and systems are often seen as cold and unfeeling, the opposite of emotional or provocative. When we look at the broader world as it exists, and our place within that world, it becomes clear that systems are the building blocks of society, of human consciousness, and the driving force for our successes and failures. Proof that a system can evoke emotion is as simple as watching a driver stuck at an unusually long red light.

Instead of striving for neutrality, the first step to truly affecting game design is to realize that nothing is neutral: what we see as a lack of bias is our own blindness to the circumstances we live within. Much as people eventually stop smelling the scent of their own shampoo or clothes detergent, we become inured to our own circumstances, and believe that this is just “the way things are,” completely oblivious to the uniqueness of our own situation in contrast to the default conditions of people around us.

This is also one of the reasons people feel compelled to make art about people and situations divorced from themselves and their lives: when we view ourselves as “neutral,” the struggles and systems surrounding the lives of others take on a more fascinating air, simply because of the novelty of something non-neutral. It is this preoccupation with the exotic that leads to fumbling and inaccurate artistic expression about people of other cultures and their experiences. Often it is not malice, but myopia; the inability to acknowledge the lie of “neutrality” leads both to an inability to recognize the uniqueness of one’s own circumstances, and the warped lens through which one views another’s life.

The largest obstacle to fostering empathy is one’s own lack of self-awareness; the only way to reach out to others is through yourself.