Exploring the potential of 'metroidvania' design in Supraland

The "metroidvania" genre has been around for decades, but has it sufficiently evolved over the years? David MÃ¼nnich, developer on Supraland, thinks more can be done to get the most out of metroidvania design.
Phill Cameron
Blogger
May 16, 2019

We've come a long way since Metroid and Castlevania: Symphony of the Night, games that helped set the standard for exploration and experimentation mechanics in sidescrollers more than 20 years ago. Now "metroidvania" mechanics have been implemented into all sorts of genres -- including everything from sandbox platformers to puzzlers.

Many games have donned the "metroidvania" moniker, implementing the genre's design elements such as gated areas that are often visually teased as just out of reach; progressively powerful character upgrades; large maps; and so on. Since it seems like these days you could close your eyes, click around on Steam and find a metroidvania in short order, the genre does seem to be running out of ideas.

But David Münnich, the developer behind the Zelda-, Metroid-, and Portal-inspired sandbox FPS Supraland, is trying to show that there is more to this genre. He believes most metroidvanias haven't explored the depth and versatility of the genre, arguing that common implementations of exploration mechanics don't actually encourage exploration.

"Exploration in first person is the most intriguing to me," Münnich told Gamasutra. He said this player perspective facilitates exploration more fully. Compared to 3D, a 2D level has "everything right in front of you -- it's hard not to see it." Whereas in 3D, you have a freedom of movement that allows for more places to look and therefore, more places to explore. 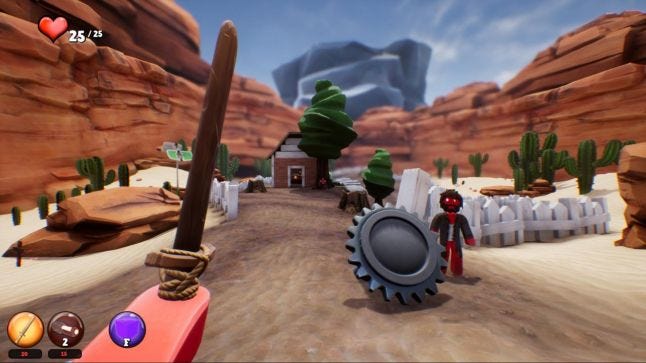 Supraland takes the concepts at the core of a "metroidvania," including multiple routes in expansive levels and barriers that can be overcome later in the game with new items, and removes many of the common stereotypes and approaches that are usually taken. Metroidvanias should be about players exploring on their own and not through developer curated passageways, said Münnich.

"The worst kind of upgrade in a metroidvania is the one that lets you destroy a red wall or open a yellow door. That's nothing more than an obvious barrier you'll get to unlock later on. It's not exciting," Münnich said. "Obviously, sometimes you will have a high ledge that will come along with some sort of upgraded jumping ability. You can't avoid it completely."

"But the best moment for us as a player is when we get a new ability that we didn't see coming at all, which lets the player look at the game world with new eyes," he said. "Now you see all the possibilities that you couldn't even imagine before. Some games handle this well, most don't."

Obstacles in most metroidvanias are fairly obvious. They usually take the form of something familiar -- some sort of barrier that doesn't fit in with the rest of the environment. A post that you can swing from with a grappling hook in The Messenger or a stronger digging tool that can break harder stone in SteamWorld Dig are two examples. While it's difficult to make things completely blend in with the environment, Münnich found a different solution: he designed items used for exploration with versatility in mind.

One late-game Supraland item, the force beam, lets you reach places you couldn't before, redirect objects, conduct electricity, and change the color of certain items. "It's a beam that you can attach to wood," Münnich said. "It can be used to move a piece of geometry blocking a path, place something to walk on, or simply pull you up to new places."

The force beam isn't used to bypass one single type of obstacle in Supraland's world; it can experimented with in a number of ways. All of Supraland's progression-based items share a similar versatility. Münnich implemented them in this way to push the player to experiment with how they interact with the environment.

"Unlike a blue super punch that can destroy blue walls, a move where you do the same thing over and over again, I want you to think about your abilities like they are in a point and click adventure. You have to try different things just to see what happens," he said. "The difference to the point and click being that you can experiment in ways that I didn't even consider. Supraland lets you try something and often enough you'll discover a solution that wasn't designed by me." 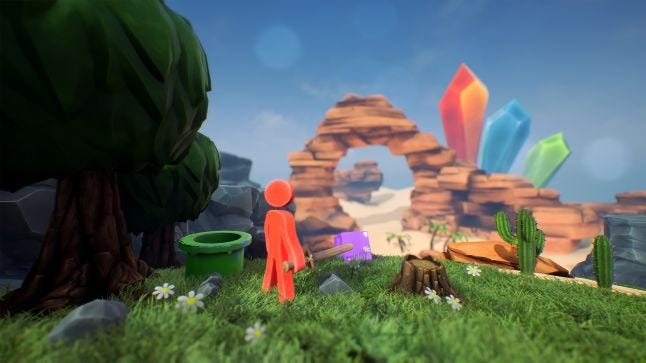 Despite the experimentation Münnich encouraged, he thought his metroidvania mechanics would be useless if he didn't respect the players time and give a way for them to meaningfully explore. He doesn't include a mini-map to direct the player, or include an overabundance of collectible items.

"Not having a map enforces that sense of exploration and deepens the immersion and satisfaction when finding one more chest," he said. "If you just chase symbols on a radar, you are not sucked in by the world itself. You need to look everywhere without relying on icons on a map. The moment you start focusing on the map to explore, the entire 3D world becomes pointless geometry."

Münnich also recognized that exploration can't be meaningful if the rewards, like the tools themselves, felt repetitive and bland. While Supraland is still a fairly big game, he didn't want to have the player feel like they were collecting for the sake of collecting.

"I find it extremely disrespectful when the playtime of a game is stretched to infinity by spreading collectables in a big world," he said. "Spreading collectables out in meaningless ways isn't any fun for the player. It might be a reason to stay for longer in the game world, but it is a very dull experience."