Every game has ways to monitor and add gameplay at the right times. Interested in how sandbox game events differ from traditional linear ones? What follows is how I’ve approached it.

I’m using Quest instead of Mission to separate it from military terms and expectations. It’s also more scalable. A special callout to Alex Cox who helped sort this bigger picture a few years ago.

The idea of how a game cycles through different features can apply to several topics. For this discussion, it'll center around non-linear sandbox experiences. If the conditions are right, the game will introduce new events to the player or remove existing ones to shape the gameplay.

The State Manager is what’s on the menu

For example, when Batman is introduced to the Riddler, it unlocks a batch of Riddler Puzzles in Arkham City.

The Game Director wants to give you specials

For example, if the player just encountered a robbery, the Game Director knows not to immediately create a new theft opportunity. Another example could be limiting when Lois Lane appears at the Daily Planet... only between her work hours 9am-5pm.

Each event has conditions it must meet before the player is allowed to interact with it. The game checks to see what’s going on around the player (World State), allows a type of event to appear (State Manager), then picks the best one for the moment (Game Director).

If done right you can end up with a satisfying experience!

With all the major parts known, you can trace the game loop for handling open world content. Imagine all the game encounters you've experienced and see how they could appear based on these checkpoints. 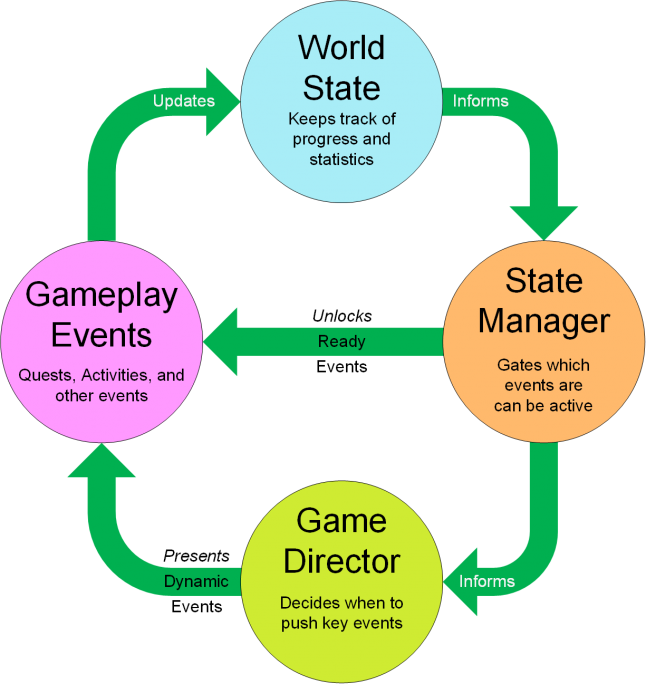 We’ll look at the full spread of Quests & Activities.

Motivation Loop details can help you shape to player goals.

Other topics such as when events can appear will also be discussed.

Other Orchestrating Gameworlds articles: Prefab Primer
You can find more posts on my website at CuriousConstructs.com.