Aphelio's Kraig Walker on why some forms of elitism in gaming can be positive
Kraig Walker
Blogger
July 04, 2013 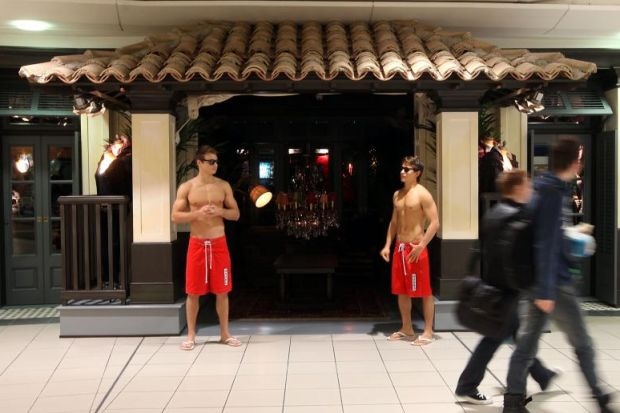 There’s a shop in the Buchanan Galleries shopping mall in Glasgow that doesn’t like me.

It’s true; there are a lot of shops in there that I myself don’t like, but this time, the fingers

There is no signpost above it, no logo. A roofed facade juts out of the rest of the store

are partially shuttered. The interior appears to be lit only by desk lamps. Subtle wubwubs

of dubstep waft through. Come in if you dare.

“This can’t be a very successful shop,” I thought to myself; “maybe it’s just a really

elaborate set up to hide the fact that retail is running out of money.”

Yes, that’s it, it has to be. But I was fatally wrong. The shop I am so afraid of turned out

to be the Hollister shop in Glasgow, an upmarket, surf themed clothing brand from the

minds behind Abercrombie and Fitch. On weekends, shirtless life guards man the

obscured entrance to the store. The condition of entry: a photo shoot with your arms

wrapped round the perfectly toned, sun kissed torso of the lifeguards, who I had no

doubt could not have originated from Scotland. On Saturday, there was a small crowd of

One could laugh at such a spectacle, but as I drifted on past with the rest of Scotland’s

genetically inferior population, I couldn’t help but think: “I want to be in there.” I, a

twenty-something, twig of a programmer who can barely carry an office chair let alone a

lady out at sea, vowed to hatch a plan so that I too could have perfectly chiseled biceps

with a Vitamin-D rich complexion.

Despite my lofty, probably unattainable newfound aspirations, there’s a bit of genius to

be analyzed in the way Hollister appeals to it’s followers. Those who want in, and believe

it that they are the type of person who belongs in there, get in, while those who don’t are

left with an aspirational longing to join them.

All for One, None for All

As game creators, we can sometimes feel like we need to appeal to everyone all at once,

or target nobody at all. This can lead to watered down, mediocre clones designed by

committee, or a cast out Frankenstein. We mustn't be afraid to avoid appealing to certain

kinds of consumer, not just in terms of genre, platform or age rating, but by mentality

and attitude towards your products.

Games a rife at attempts to utilize this idea already, but many miss the target. Creating a

will be. A game like Minecraft has very subtle nuances of elitism around, not through

player community. Many of us (including myself) have bought Minecraft thinking “I could

do that,” but when we try, we don’t even get close.

We mustn’t forget about the good ol’ MMO as well, for both good and bad examples.

and edge, but also complex, long winded and punishing. Only a select few in the gaming

population truly belong in CCP’s Universe, but it doesn’t stop the rest of us from trying.

prized and high value, but completely miss the mark. If Primark, for example, started

planting lifeguards outside their front door, would that make their brand aspirational, or

The best sort of elitism in games is something we must aspire to achieve and can. If I put

my mind to it, I could create a working replica of Edinburgh in Minecraft, with trams.

What I don’t feel like doing however is something everyone else can. Higher gear levels

and ranks may seem like a sure-fire way of creating ‘Positive Elitism’ in game, but

without any belief or feeling behind their attainment, your game becomes a grind

machine that nobody wants to play.