Effective Game Design: How We Use Articy Draft to Organize Game Content

In our studio, we often use Articy Draft as our main game asset management tool, and we would like to share this experience so that you know what to expect behind the marketing shell. Expect only an honest review here.
Pavel Shylenok
Blogger
April 02, 2019

In one of our previous articles, we discussed the hard life of a game designer and handy tools that sweeten it. In our studio, we often use Articy Draft as our main game asset management tool, and we would like to share this experience, so that you know what to expect behind the marketing shell. Expect only an honest (to the extent of our knowledge) review here. We’ll skip the information you can easily find in the official tutorials and reviews. Straight to business this time… and, yes, prepare for a long-read.

So, what is Articy Draft exactly? While diving into game development, you have to deal with lots of unknown words and sometimes it’s not enough to just look them up on Wikipedia or even promo site. Simply put, Articy Draft (AD further down the road) is a tool for visual representation of game entities with vast automation capabilities. Its other use case is the entities database. AD can really help a game development studio keep entities organized. Let’s find out how this software helps us make a really remarkable product.

Most games require various data storage and use files of different formats, including custom ones — i.e., inventory items for RPG and Adventure games, in-game units and characters with all their properties. Typically, when a game is developed and balanced, these configs are edited a countless number of times, which is time-consuming and never convenient. If you use custom file formats, most likely you have developed and are supporting custom tools. While those definitely are needed for any serious game, Articy Draft can help you keep that game data organized.

What it allows you to do is to define game entities and necessary properties. For example, you can put the entire set of magic spells, available in your game, inside AD.

You can define such properties as:

The same process can be used for other game entities, like inventory, game library data, characters, achievements, quest objectives, etc. Basically, you can replace all your numerous game config files with just one tool, and manage them in one place. This is what no other wiki-like system allows you to do.

However, AD allows you to export these entities in data-friendly formats and even provides ready-to-use frameworks for the most popular engines: Unity3D and Unreal. Even if you use other engines, an export to a JSON format is available. So you can quickly develop a parser —in any case, it will be faster than the development of custom game data manager software. Thus, you can treat AD as a ready-made editor for your entire game database.

Let’s briefly look at the process of configuring and managing of entities.

So How Would You Configure Entities?

AD has a tree-like structure, where each entity can have an assigned template, each template is a set of features, and these features can have property fields of several basic types, like string, integer, boolean, etc. 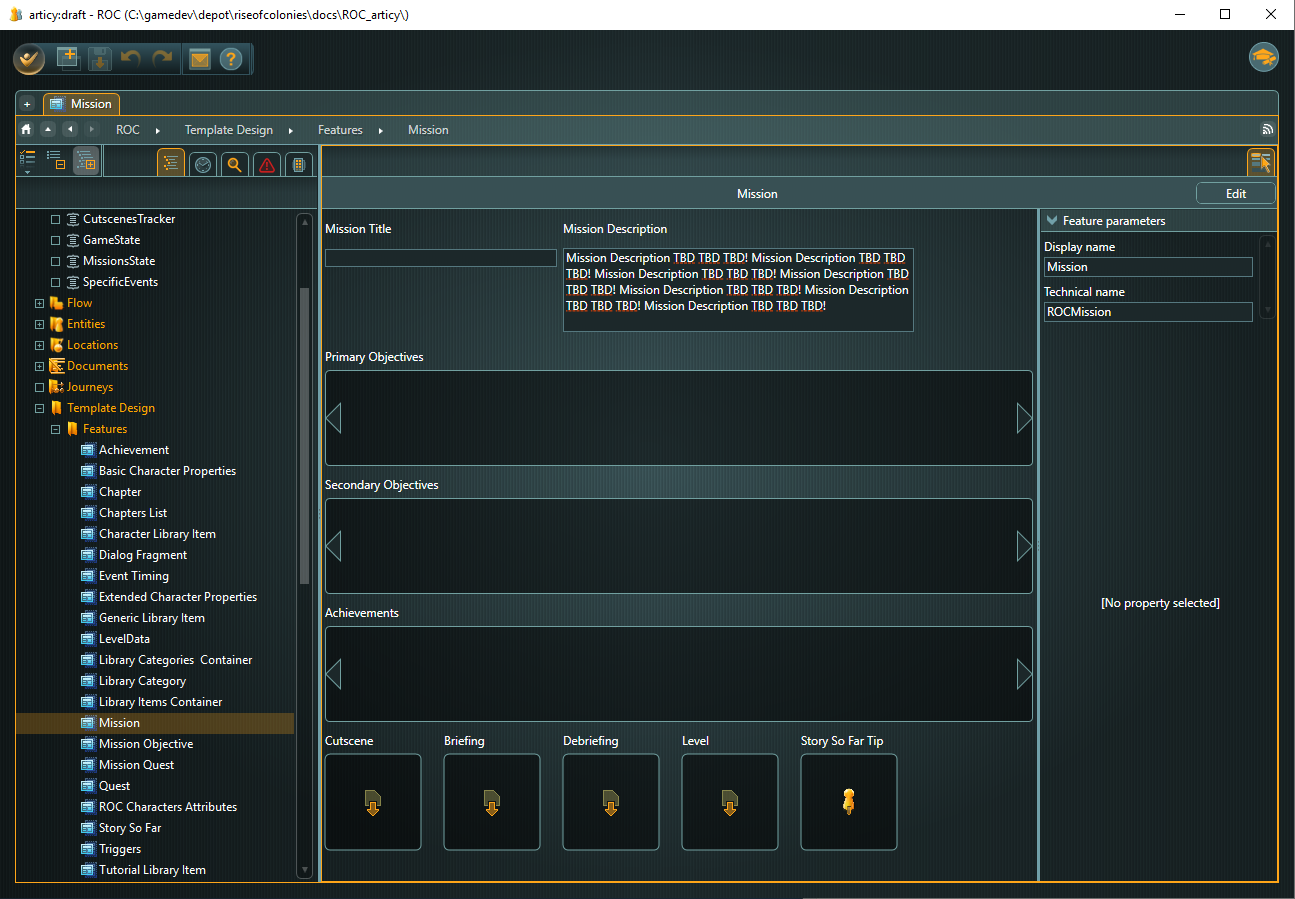 Let’s look at our mission feature, that contains the following fields:

The good thing is that all these objects we define in the visual tool are available as C# objects in Unity after project export, so you can easily access values and data.

After you’ve defined your features, you create a template out of them, like on the screenshot below: 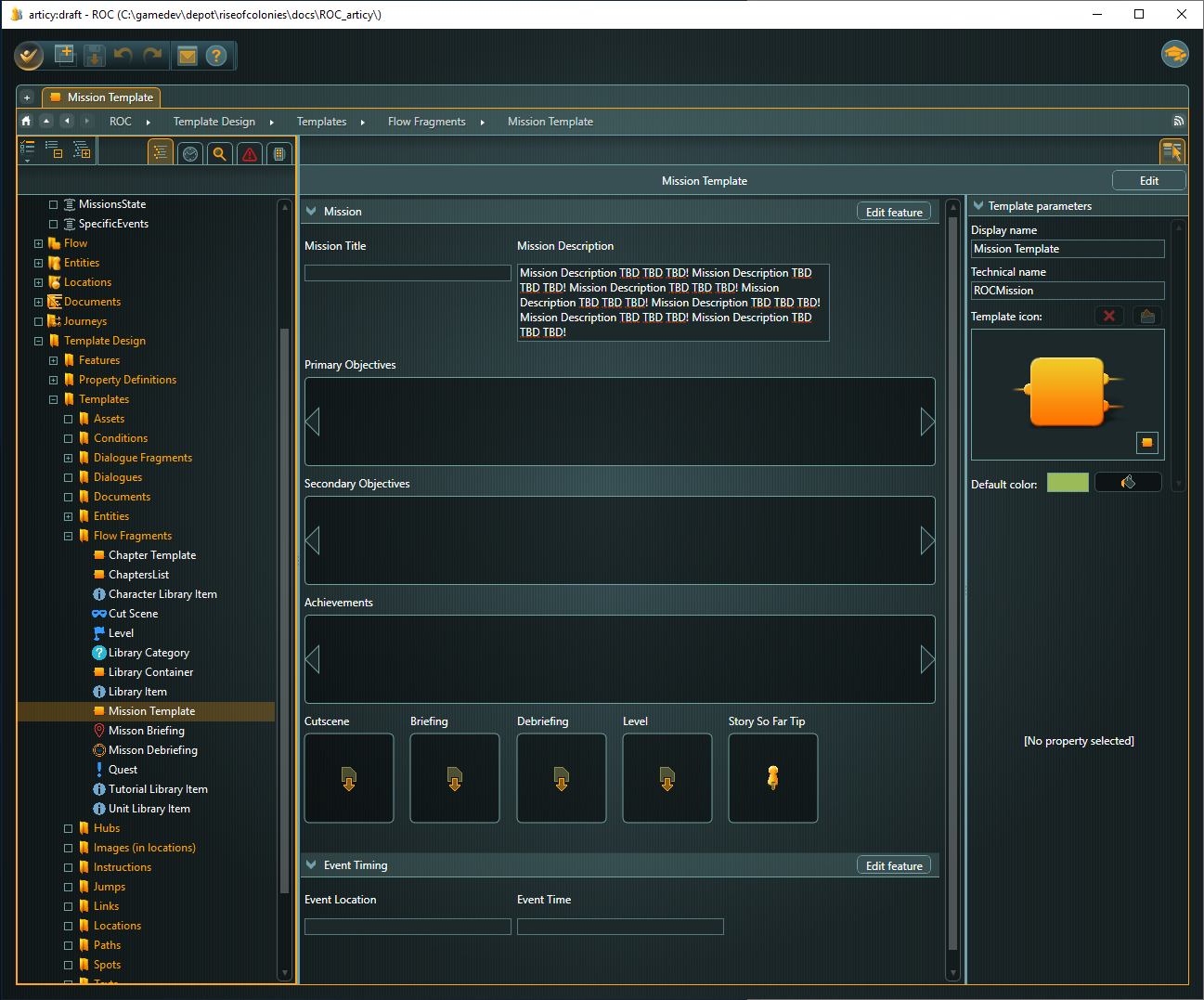 After the template is developed, you then create an entity and assign a template to it. The screenshot below indicates another entity — Unit configured in AD. 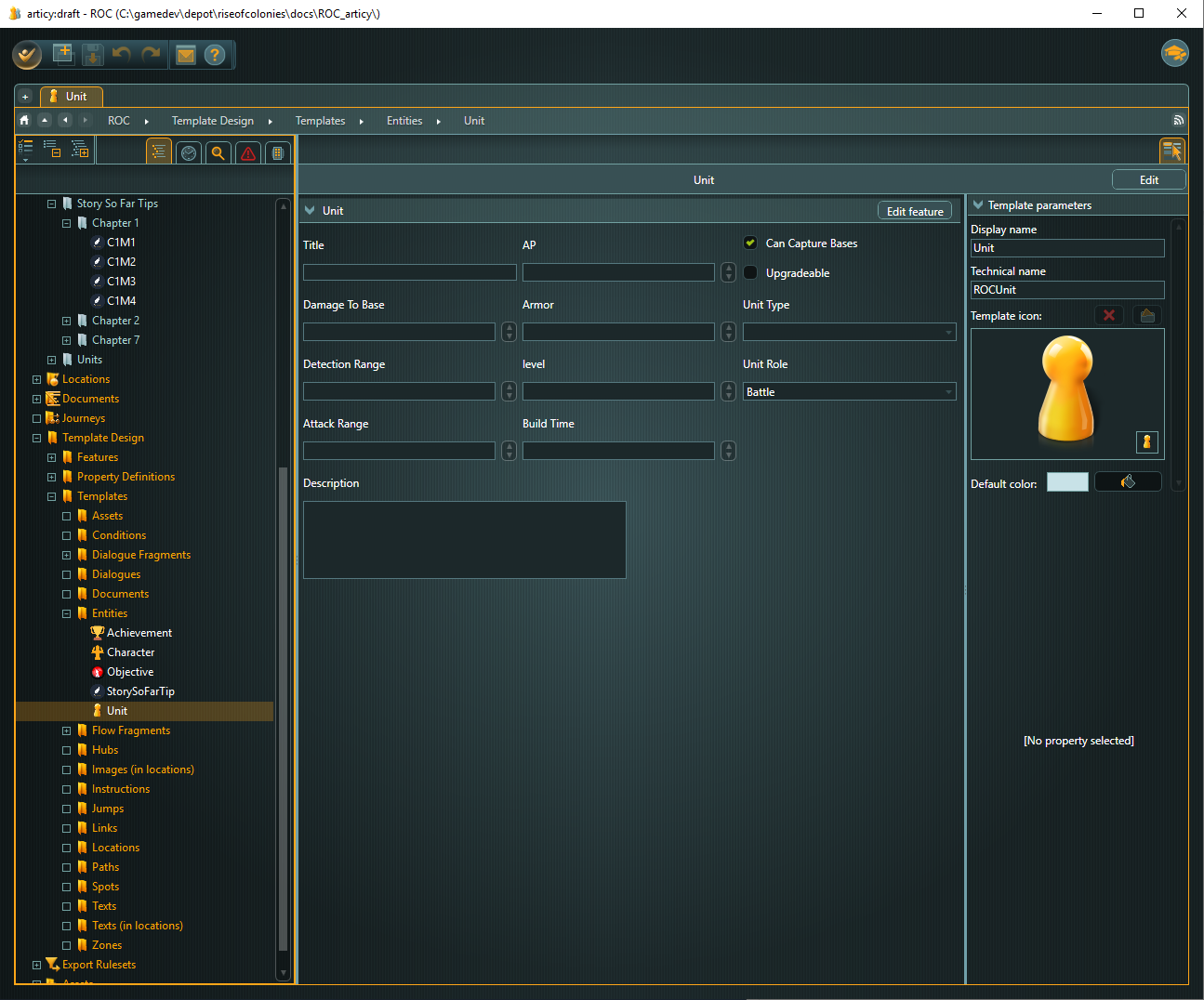 AD is much like an Object-Relational Mapping (ORM) in a world of databases. One could ask, why properties can’t be assigned to templates directly? Well, we assume this extra step is added for more flexibility. For example, the properties like title and description exist in many game entities (i.e. spells have title and description just as well as game collectibles do), so they can be reused to keep your structure more organized without duplication.

How Can You Use Flows in Articy Draft?

AD’s assumption is that flows are the sets of objects that can be traversed (or navigated) sequentially as it is defined in the editor and based on conditions. It is like a slideshow where you turn the pages in the code to see a new page. One of the possible application of this feature is the dialogues flow. That’s where AD really shines in my opinion, making complex, non-linear dialogues creation a breeze.

Conditions and Global variables can track the state of previous player choices, so player answers “No”, when given choice, AD records it and allows accessing it in sequent dialogues to guide the flow, based on player’s actions. Let’s see in more details how the flow system works.

In order to construct a dialogue or a flow you have certain tools at your disposal: 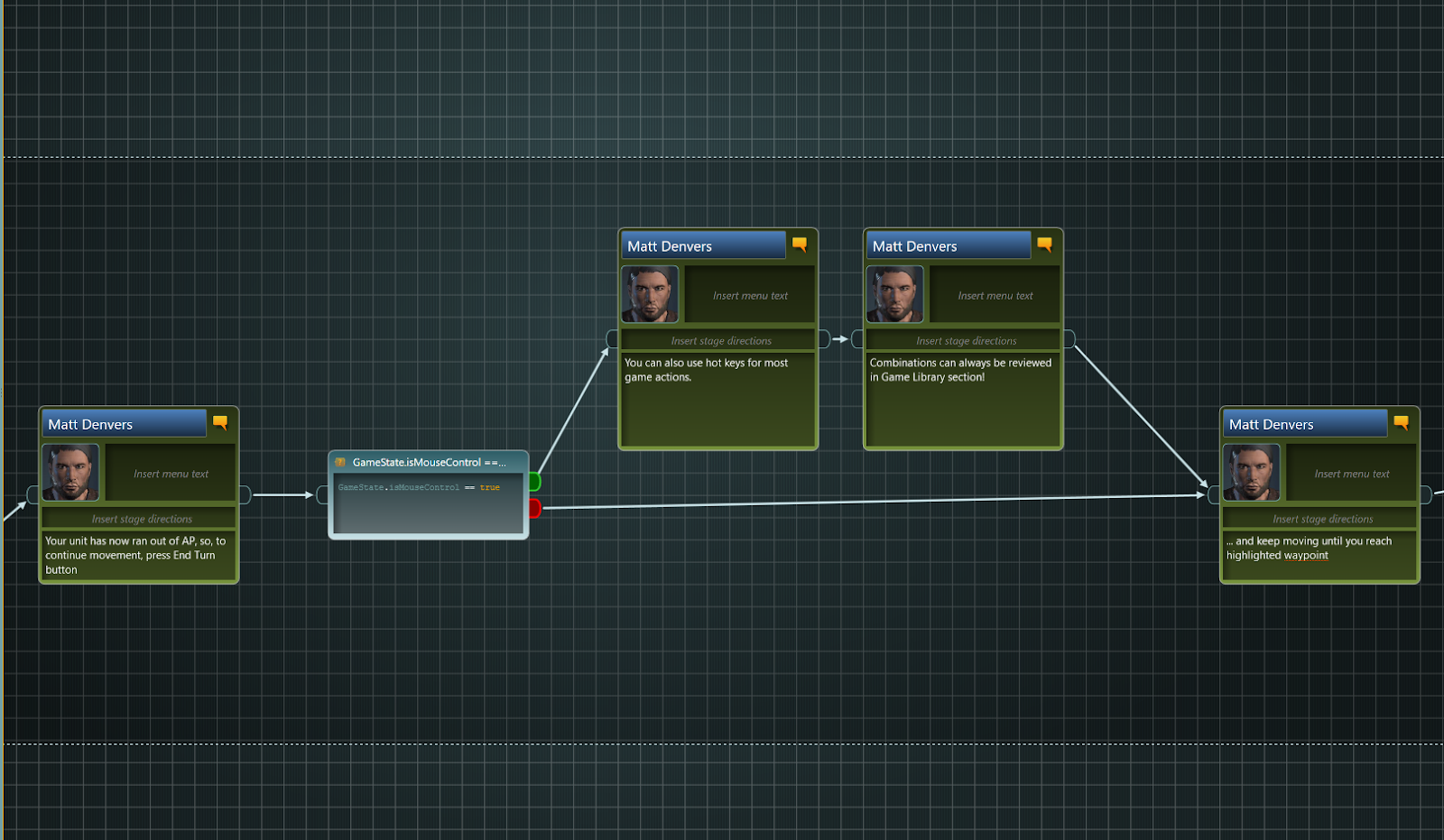 In the screenshot above, we provide a user with different information, depending if he uses Mouse or Gamepad.

Here is the dialogue from one of the missions in Rise Of Colonies — a game we’re currently working on: 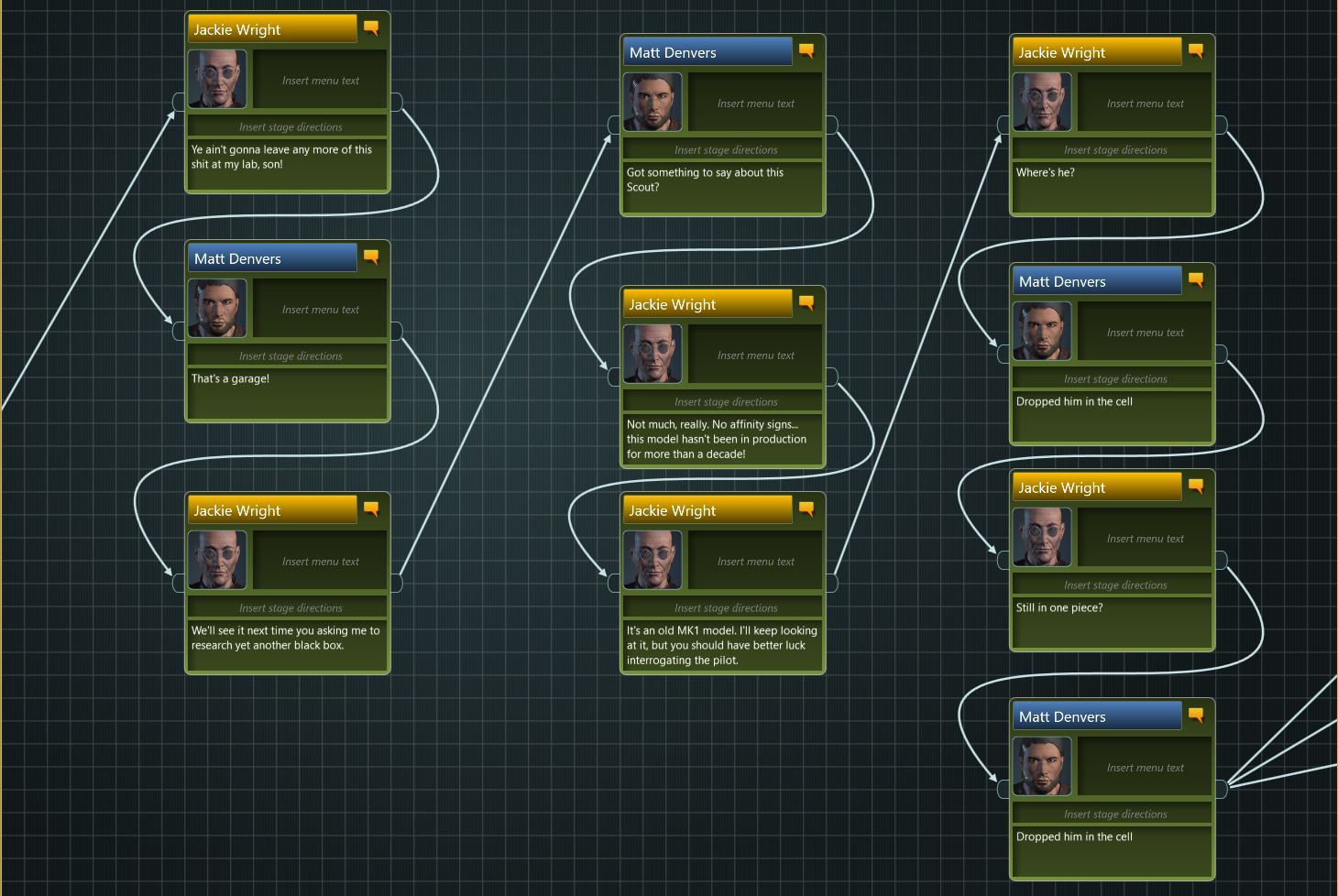 And a whole picture with branching and multiple choices:

While dialogue flows offer a convenient way to present information to the user, they are not exactly convenient for other parts of the game.

Initially, we hoped to have all game flows, such as a campaign flow, a mission flow, defined in Articy, so we would have something similar:

It was quite tempting to put it all in AD, but, after some tests, we dropped this idea, because of the limiting issues:

For example, when you are on the chapter screen, you need to get the list of branches, sort them (because there’s no default sorting), identify valid branches (the valid ones are available entities). To get that info you need to set starting flow traversal point — the entity from which you start to flip pages. Then, you launch flow playback and wait for the callback. After that, to go deeper, for example, to get the chapter’s missions, you repeat the process, however, this time the entities are different, because they are now missions’ ones, not chapters’, so, obviously, they need to be processed differently. However, you still have only the above 2 methods available. To add to the point, you have objectives, dialogues, etc — all that should be processed in the above-mentioned callback methods, making them like the main methods of your game.

However, AD flows can be used like entities, where access logic is controlled from the game code. 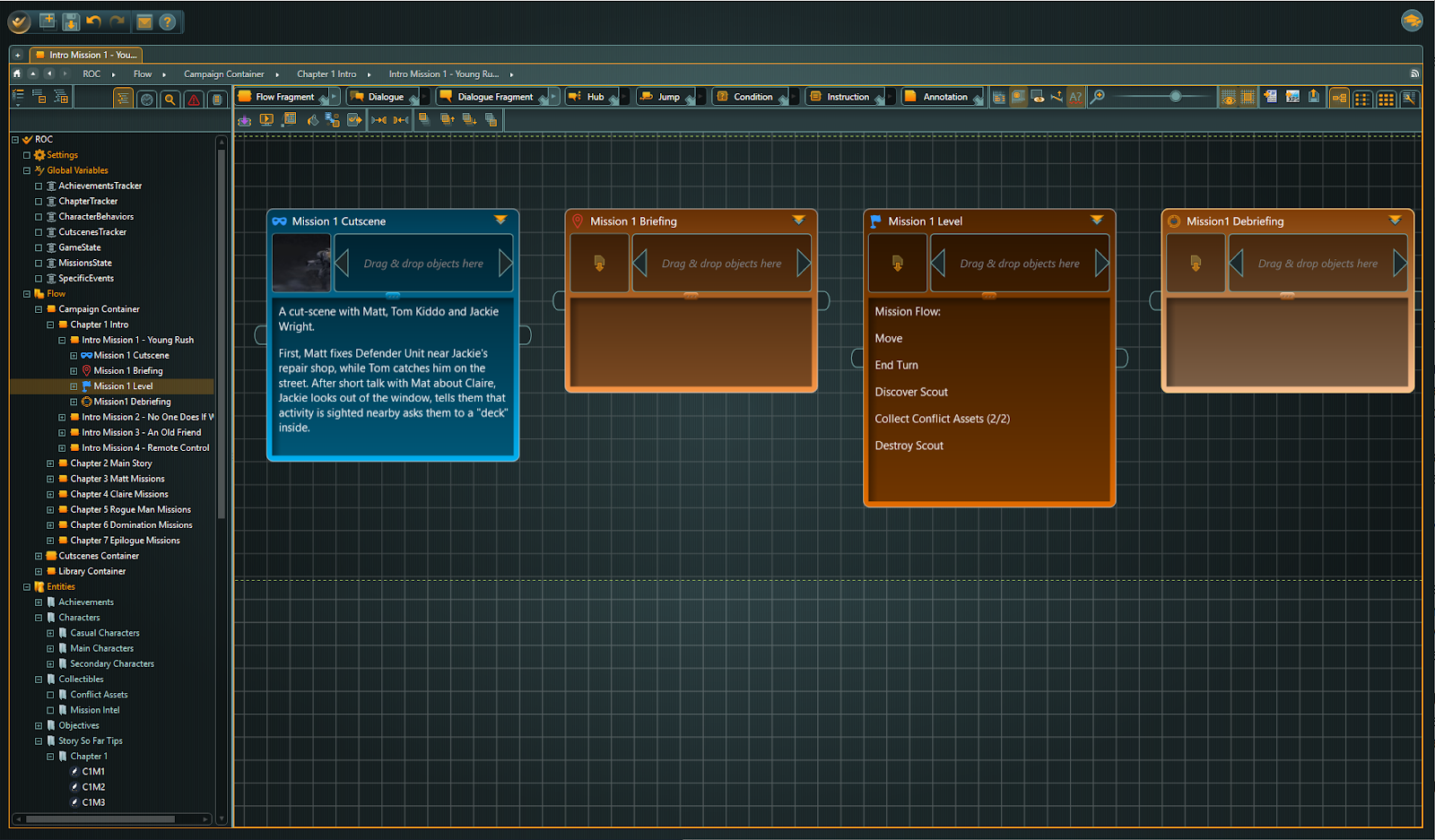 The screenshot above displays the mission’s flow contents. Keep in mind, that there aren’t any connections between entities — they are managed from game code:

This is how it looks in AD: 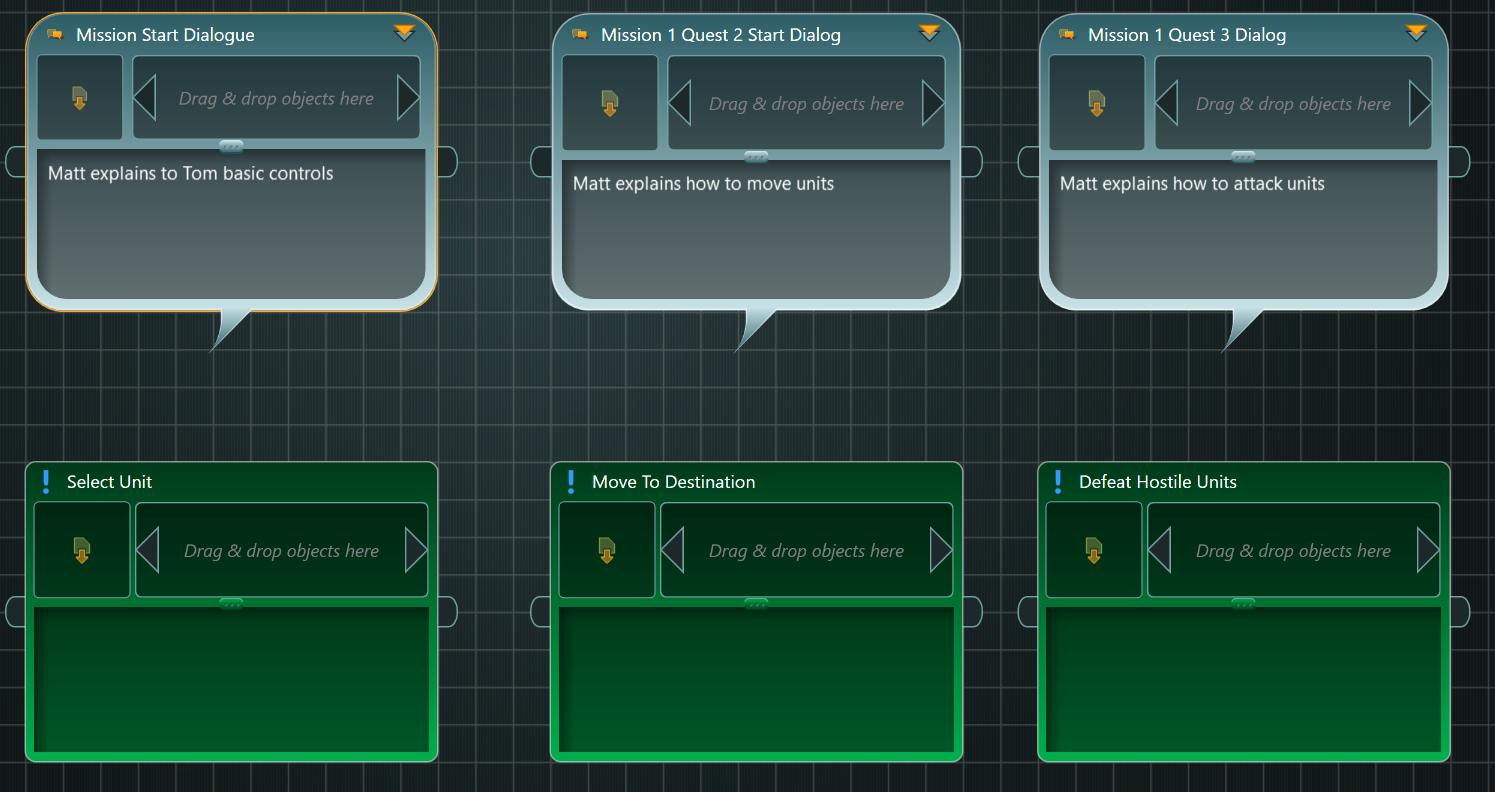 Note: Just one important note to keep in mind. Articy Draft Database is read-only, it means that all runtime changes made to it will be lost after reload, so you need to develop additional facilities to save and restore DB state, like player’s choices in dialogues, for example.

AD has some additional features that can be useful in some cases:

Articy Draft has some quite unpleasant surprises that you need to consider prior to facing them under extreme development conditions and tight deadlines.

From a pricing standpoint, Articy Draft isn’t an expensive software solution (given its value), but it’s not cheap either. Generally, Articy comes in 3 licenses: Perpetual Single and Multi-user licenses and a subscription-based one with a monthly fee.

A single User license is the most affordable option, which comes under $100. You should understand that it allows no collaboration at all. However, if your studio has a single employee that creates Articy content, you can get away with it.

Multi-user license is where the real game starts. Each user in multi-user license will cost around $1200 with an additional $120 view-only version. Floating licenses are twice as expensive.

While these prices can be really affordable for game studios with AAA budgets, they can be a burden for indie studios, considering the fact that Articy Draft is not the only software you will have to buy for your game. Overall, in our opinion, this software has all chances to become a perfect tool for a game designer letting developers work out some of the currently existing flaws and introduce more flexible plans for small indie teams.