An applied semiotic analysis of an aspect of the UX and game design of Dishonored (Arkane Studios, 2012).
David Friesen
Blogger
April 29, 2016 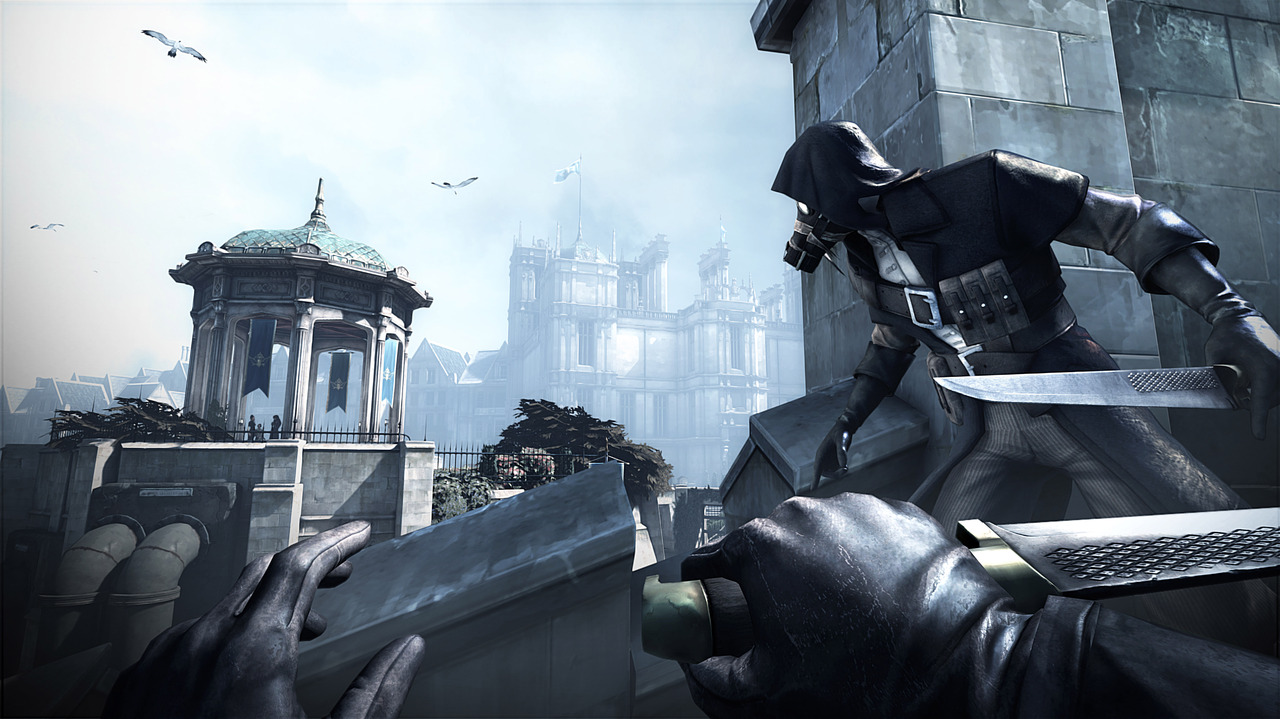 The subject of this semiotic analysis is a set of two mutually dependent tactile interface metaphors from Arkane Studio’s Dishonored, a video game released in 2012. This will not be the first time I will have written about this game, and until now I have not had the opportunity to treat properly this particular feature of the game’s generally stellar design. Specifically, the text will be focused on the intentional mapping of the right bumper and trigger of any standard gamepad controller (my own experience being with those of the Xbox 360, One; though the Xbox One was not yet released in 2012) to the player’s corresponding in-game abilities.

A metaphor is a rhetorical device defined by the transmission by implicit comparison of a certain element or quality of one thing to another in an effort to heighten understanding of a particular point of view. An interface metaphor, more specifically, is a design technique where an interface attempts the use of metaphor to aid in learning, comprehension or to create more compelling user experiences. A tactile interface metaphor, then, is one that operates through modes of interaction that require bodily movement from or respond physically to the user.

The functional premise of Dishonored is a stealth-action RPG with a dual emphasis on first-person close-quarters combat and on mobility and elaborate level design, with a high degree of vertical movement and which encourages unhindered exploration. At its core is an omnipresent choice given to the player: whether to pursue a course of chaos, letting the city streets run red with the blood of innocents and guilty alike, or to run unseen and unheard in the shadows and mists at the borders of perception – or various combinations of the two. The strength of these poles over one another, their strategic viability, is as balanced as their mechanical realization is deep (though, inevitably, in certain situations one might win out over the other). For this reason it is important these options of the player be represented both distinctly and equally.

There are two buttons on the standard gamepad controller that each map to one, representative ‘active’ player ability, both for stealth and for combat: in stealth (i.e. while undetected) the right bumper (bumper) puts enemies into a choke-hold, after several seconds of sustained use rendering them unconscious – but not dead – and in combat blocks or parries; conversely, the right trigger (trigger) uses the sword, stabbing unaware enemies, or swinging, as in combat. What I believe is most impressive about these mappings is their high degree of modality, especially in contrast with one another.

That the natural resting state of the user’s fingers over the shoulder buttons is to be on top of the triggers is evidenced by the evolution of the Xbox controller from the 360 to the One, which seems to have progressed with great intent towards this end. With this understanding, the trigger action may be seen as one inherently impulsive, in contrast with the bumpers which require the user more carefully consider where to press. Additionally, the trigger is activated more with the far end of the finger, as opposed to the bumper with the mid-point, affording the user more rapid response when using the trigger. Finally, the physical shape of the bumper is long, and runs more parallel, rather than more perpendicular, as in the case of the trigger, to the user’s finger; this positioning required of the user to activate each aids in the construction of the metaphor of the morally considerate and single-minded mentalities respectively associated with the two dichotomous modes of interaction.

The physical shape of the trigger is narrow, iconic of the point or cutting edge of the blade, and the motion required to activate its player ability is, concretely, a compression or plunging, iconic of the stabbing or plunging of the blade itself into the enemy. The analog nature of the input in conjunction with its strict directionality gives a sense of aggression or hostility, further compounded by the shape just described and the singular-purposed hook-like gesture required of the player; the input despite being technically analog is functionally binary, meaning if the player wishes to attack at a specific moment in time, they must either press in advance, in anticipation of that moment – highly impractical in combat, which is often fast-paced and complex, and in stealth, which requires the user be near enough the roving enemy to access the single-stab kill – or press as instantaneously, and in effect as aggressively, as they might. A code that this mapping employs is one that is, to the best of my knowledge, universally adopted by first person shooters, where the trigger on the controller effectively corresponds to that of the player character’s gun. Connotations of lethality are formed not only by the modal comparison with real weapons, but also by a player’s pattern of habit not unreasonably assumed, given Dishonored’s close kinship with FPS games at large.

Conversely, the bumper is long and its interaction with the player ‘blunt’, being not only binary but also digital, incompressible, and requiring, due to its orientation with respect to the player’s hand, an appreciably greater – and thus flatter – portion of the finger for activation. This may be understood, especially in contrast with the trigger and its functionality and connotations, as more defensive, restrained or solid. In stealth the gesture is iconic of the player character’s arm held across an enemy’s throat from behind. In combat the gesture may be seen as the metonymic shield, and more generally as consistent with defensive posturing in a fight, in that to protect oneself one would aim to maximize the area before them that serves to intercept blows to the body. The horizontal angle itself is readily understood as being stable and, by extension, non-combative, both connotations closely associated with defense, restraint and solidarity – connotations which can be applied equally to stealth when considering the ultimate effect or goal of the non-lethal neutralizations. Even in terms of the contrast between digital and analog input types is the player’s physical interaction consonant with these ideas: both the variability and seeming instability of the trigger is underscored by the comparatively decisive and thoughtful movements of the bumper, and both such ‘personalities’ are representative of the associated mentalities and effects of interacting through each with the in-game world.

The consistent and weighted emphasis of the moral dichotomy of player choice in Dishonored becomes only reinforced, as our bodily interactions with the controller approach our assumptions of how we might expect the actions to feel, or make us feel in turn. But whether actions ultimately be of any consequence is of comparatively little importance, as the burden of them is felt by the player in every moment. The effect of the metaphorical aspect of this system is to create a more empathetic experience, whereby the players are provided not only visual and auditory perspectives of the world, but also a kinesthetic one, through a visceral immediacy and plausibility sustaining more meaningful and direct player investment impossible to accomplish by other modes of interaction.