Digital Games in the Real World : The Design of the Game World of Jason Rohrer

Boston based architectural design firm, IKD, discusses the design process behind the exhibition and installation design of The Game Worlds of Jason Rohrer now showing at the Davis Museum at Wellesley College until 26th June 2016.
yugon kim
Blogger
April 08, 2016 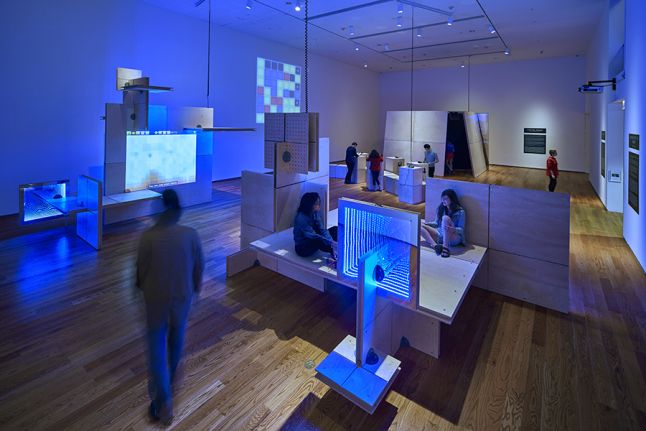 The Game Worlds of Jason Rohrer is a retrospective exhibition of independent game designer Jason Rohrer, whose work was one of the first to join MoMA’s permanent video game collection. The current exhibition at the Davis is the first ever solo art museum exhibition devoted to a video game artist. 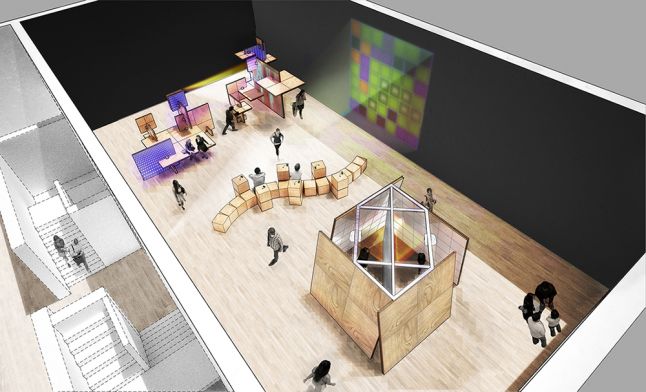 Unlike traditional art objects, video games have no actual physical presence. This was a unique challenge for us—our task was to create a spatial experience that would allow not only for the games to be played, but also for the important, sometimes existential themes that define each game to be understood. We wanted to present the installations in the main gallery as human-scale, immersive, interactive environments that would enhance and augment game-pay. We played the games over and over, talking about how we felt while we played them, and what was most significant about them, and how we could translate those things into designed environments. It was critical for us not to be literal with our interpretations. So we designed the installations to be physical manifestations of conceptual ideas posed by the games while encouraging visitors to be immersed in the world of each game, blurring the line between the digital and the actual.

One of the first decisions we made was to construct the installations primarily out of square pieces of raw plywood and exposed fasteners to echo the pixelated and raw aesthetic of Rohrer's video games. 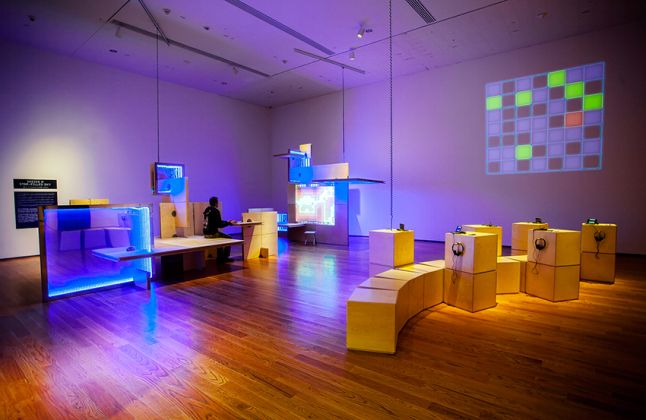 The first game, Primrose, is played on a colorful square grid. It is projected along the back wall of the main gallery. Visitors enter the exhibition on the upper level and are invited to play the game from the balcony where they can also get a bird’s eye view of the three other game installations in the main gallery below. It presents an opportunity to become familiar with the interactive nature of the exhibition, and to take in the sculptural qualities of the installations below. 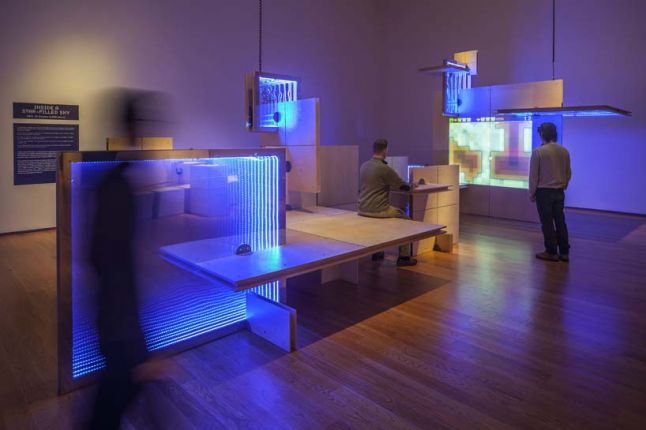 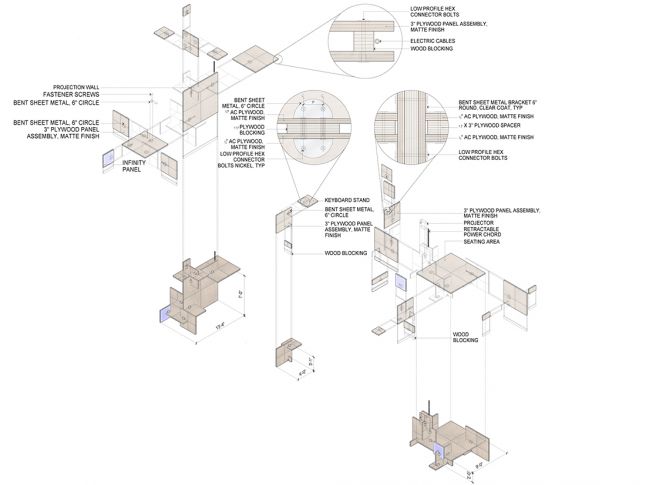 Under a Star Filled Sky is a complex arcade-style shooter game that explores worlds within worlds, fractals, scaleless-ness, and infinite recursion. We designed a pavilion made of intersecting modular square planes of various sizes arranged according to the rules of a fractal. Some panels are constructed as infinity mirrors, where the combination of mirrors and LEDs lighting give the optical illusion of infinite depth, which is an important theme in the game. The game is projected onto one of the planes. Although the installation itself seems visually abstract at first, as the visitor starts playing, the game and the installation become one, completely immersing the player in the world of the game. In addition to setting the stage for game-play, the installation also serves as general gallery seating, housing for the video projector, and a kiosk for the keyboard and mouse required to play the game. 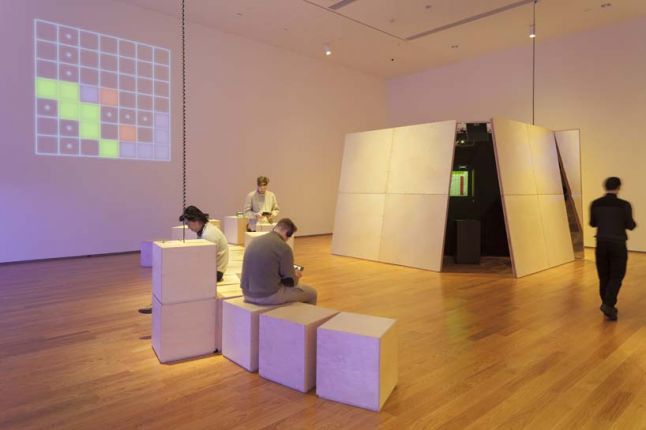 Diamond Trust of London is a two-player turn-based strategy game played on two Nintendo DSs, where each player represents a different country competing over diamonds in Angola. We designed a series of plywood boxes configured in a long S-shaped that would mark the center of the gallery space. The cubes are benches, whose arrangement takes cues from the traditional Victorian courting bench—players sit next to each other without being able to see each other’s screens. We decided that physically sitting next to an opponent and being fully aware of them while not being able to see their screen would enhance an important dynamic in the game: in real life players would know each other, but in the world of the game they would be free to betray and deceive. This forces them to confront issues of ethics and trust. 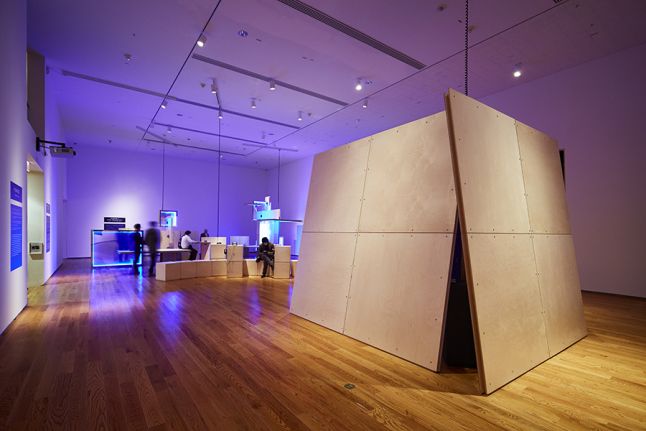 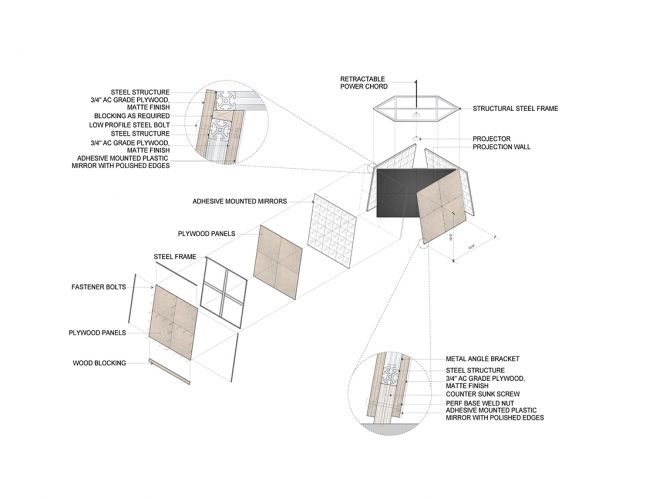 is a poker-like game with occult references played on a large numbered grid. Originally an online game, players bet real money against real (but anonymous) opponents. The goal is to predict the opponent’s moves while being unpredictable to the opponent. Game-play feels like a psychological mind-game, where cognitive biases are actually reflections of the self. Thinking about how you are perceived by your opponent further heightens the awareness of self-perception. To enhance this feeling, we wanted the game to be played in isolation, in a walled space with mirrors on all sides. A single player occupies each side of a panel that diagonally divides the mirrored space in two. The game is projected on either side of the dividing panel. From the outside, the walls look like towering square panels that shift slightly and lean against each other to form the square structure. In order to play the game the visitor must physically enter this mysterious looking space. 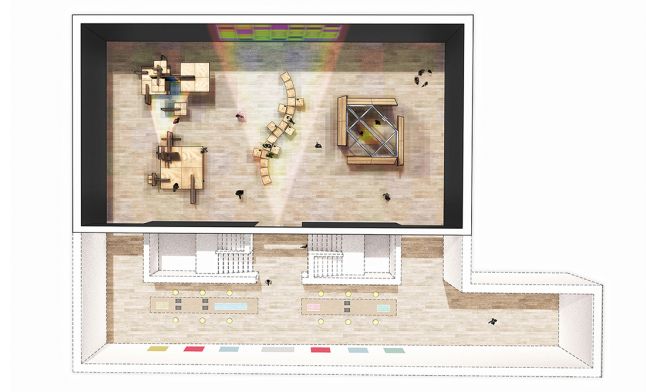 We wanted the design approach to The Games Worlds of Jason Rohrer to challenge the traditional notion that museum exhibition design should be secondary to the exhibited work. The environments created for this show propose a new kind of exhibition where the design is integrated with the artwork to enhance and elevate the exhibition experience, and where visitors are invited to encounter digital art, which is inherently intangible, in a meaningful, palpable, and very real way. 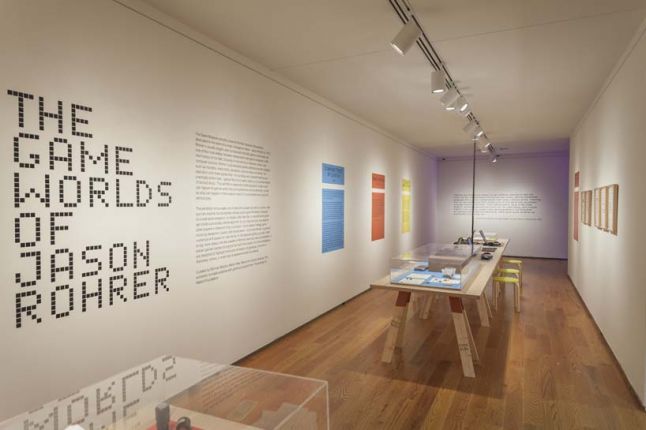 IKD, an architectural design firm based in Boston, designed the exhibition and installations for The Games Worlds of Jason Rohrer, currently on display at the Davis Museum (106 Central Street) at Wellesley College. It will be on view until June 26, 2016. 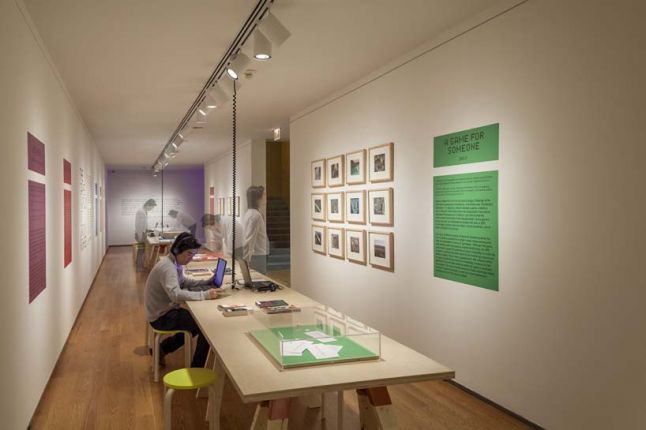