Designing Variables and Calculating Score in a Management Sim Game

Keeping little virtual people happy is no easy task! How do you track variables and compute their satisfaction? How do you calculate the final score? Here's my game design musings.
Jakub Kasztalski
Blogger
December 09, 2015

A game about poops Things are getting messy...

My current side project is a silly, Theme Hospital inspired management sim where one takes over the creation and maintenance of restrooms in variety of settings, from small cafes and malls all the way to hospitals and even the Vatican. Dealing with needy customers, the dreadful after-lunch bathroom rush, dirty hobos and inspectors are just some of the challenges you will face on the path to epic poops!

The ultimate goal is ensuring the patrons have a quick and enjoyable time, whether they need to poop, wash themselves, change their baby's diaper, or puke after a long night of drinking. Their total satisfaction is used to compute the final score and monetary reward, so it's critical to lay out all the variables and math behind.

There are two key entities in the game:

The people have certain needs (poop, wash hands, etc) and the structures allow them to fulfill them. But there's more things to worry about!

Aside from simply checking if certain needs are fulfilled, there are a number of factors affecting a person's overall satisfaction:

On top of perpetually-increasing dirtiness, each structure can have a status such as "broken," "needs watering" (potplant) or "clogged." Alternate statuses trigger after x amount of uses and usually prevent further use of a structure or decrease their heat and luxury. They can be fixed by spending the hard earned cash. The Math: Single vs. Multiple meters

Single Meter: having a total Satisfaction variable that starts at 100% and slowly depletes if a person has to wait, the bathroom is beyond their dirtiness threshold, or they are too cold/hot.

The beauty of the first system is its simplicity: it's just one big variable to track and, more importantly, communicate to the player. Making the design so transparent would allow gamers to grasp the underlying mechanics much more quickly. If a patron is not having a good time for whatever reason, their satisfaction dwindles!

However, the second system allows for much greater control: I can clearly see how each variable decreases over time and balance it against each other and structure cost. It could also allow for additional effects, such as changing a person's icon to disgusted when their dirtiness is too high. But this means having 3x as many variables to communicate to the player.

Thinking of the player

As I outlined above, a key consideration is the player experience. Looking at a bathroom with anywhere from 5-20 structures and equal number of patrons shuffling in an out, it quickly makes for A LOT of variables to keep track of!

Currently each person has a smiley icon above that changes experession with their overall satisfaction. A white ring around it slowly depletes, indicating their patience. Little fire/snowflake icons indicate being too hot/cold, and a fading-ing poop icon shows their current digust level. Similalry, structures will fade-in a poop icon with their dirtiness level, and occasional wrench icon will pop up if they need fixing. Gauges were a TERRIBLE idea

This works well if everything boils down to one variable, but if I track patience, dirtiness, comfort (and maybe others?) separately, should I have a gauge for each? I tried that in an earlier prototype and it was overwhelming past 4-5 people. But perhaps there is no need to indicate that much detail, and a simple smiley face with side-icons is enough even if the underlying math is more complex?

For example, initially I had person stats that varied per person (i.e. some were more germophobic than others, some did not want to share bathrooms with opposite gender etc.) However, as the volume and pace of the game increased, I realized there was no time to micro-manage each person individually, especially when their stay in the bathroom is relatively brief. So instead I switched to making those variables global per-level, rather than each individual, and it's been working well.

On top of the satisfaction calculations, there's a bunch of other design decisions on my mind:

Intrigued by my work? Check out my website or my upcoming game below: 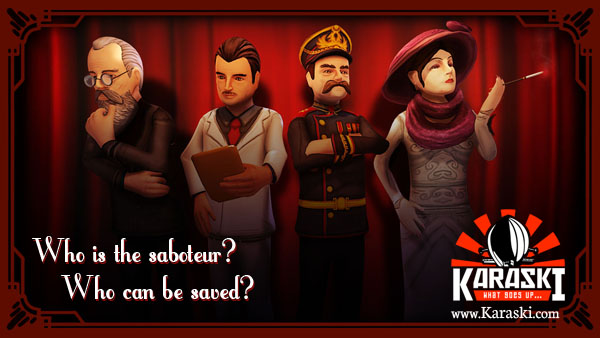 Comrade LISTEN! The Glorious Commonwealth's first Airship has been compromised! Who is the saboteur? Who can be saved? Uncover what the passengers are hiding and write the grisly conclusion of its final hours in an open-ended, player-driven adventure. Dziekujemy!