In the next study, we will see how the successful Hollow Knight game opens the door to a wealth of lore that, together with the game mechanics it presents, can offer us another vision of the main game lore.
Jaime Pineiro
Blogger
April 23, 2021

The Pale King, the Wyrm, the pale beings. These are concepts that Hollow Knight never quite makes clear, but which somehow serve as intrinsic motivation for the player to discover what secrets lie behind them. Veterans who have made it to the end of the game will have noticed the great narrative potential of this game, but what if I said that Hollow Knight could very well have an alternate ending that respects the main lore and core mechanics of the game to offer a different experience to those who want to push the game to its limits?

We'll see how a design study has concluded that there may be more than one way to end the Flash and restore peace to Hallownest.

The first time I played Hollow Knight I realized after several hours that this is a game that has great environmental storytelling in every corner of Hallownest. Thanks to these mysteries, the player is allowed to progress through the game while discovering the lore of the world. This is a very unique resource in this game as there are many occasions where we come across information that we don't understand but, the use of mechanics and exploration, makes narrative, combat, and exploration go hand in hand at all times to build the game world itself and its story. I consider that these three factors are what makes Hollow Knight what it is, so in this article I will have as a design goal, to implement an alternative ending using the narrative elements present in the game, maintaining and respecting the combat, narrative, and exploration to offer a similar experience to what a Hollow Knight player would experience.

In this case, considering that the process to reach the good ending of the game is known, let's start from the white palace. In this area, characterized by its heavenly feel and peace of mind, we come across a hidden area that few players are aware of, but which is the most difficult to overcome, the path of pain. With its spinning blades and thorn-studded walls, this is possibly the area that tests your movement skills the most. Few players decide to pass this area because there is no reward interesting enough for the player beyond a few seconds cinematic which although having great relevance to narrative level, offers nothing in return except something that I will use in my favor, information. So it is here where the player's reward in this new design proposal will be a charm. Charms are a narrative resource used in the game that allows you to understand the world while enjoying new mechanics. In this case, this amulet will symbolize on the one hand what is intended to represent the cinematic, the close union between the hollow knight and the pale king (narrative) along with a new combat mechanic that will be explained in detail later (combat and exploration). In this charm we will find the following information that will be relevant to understand both the relationship and the history of the amulet: 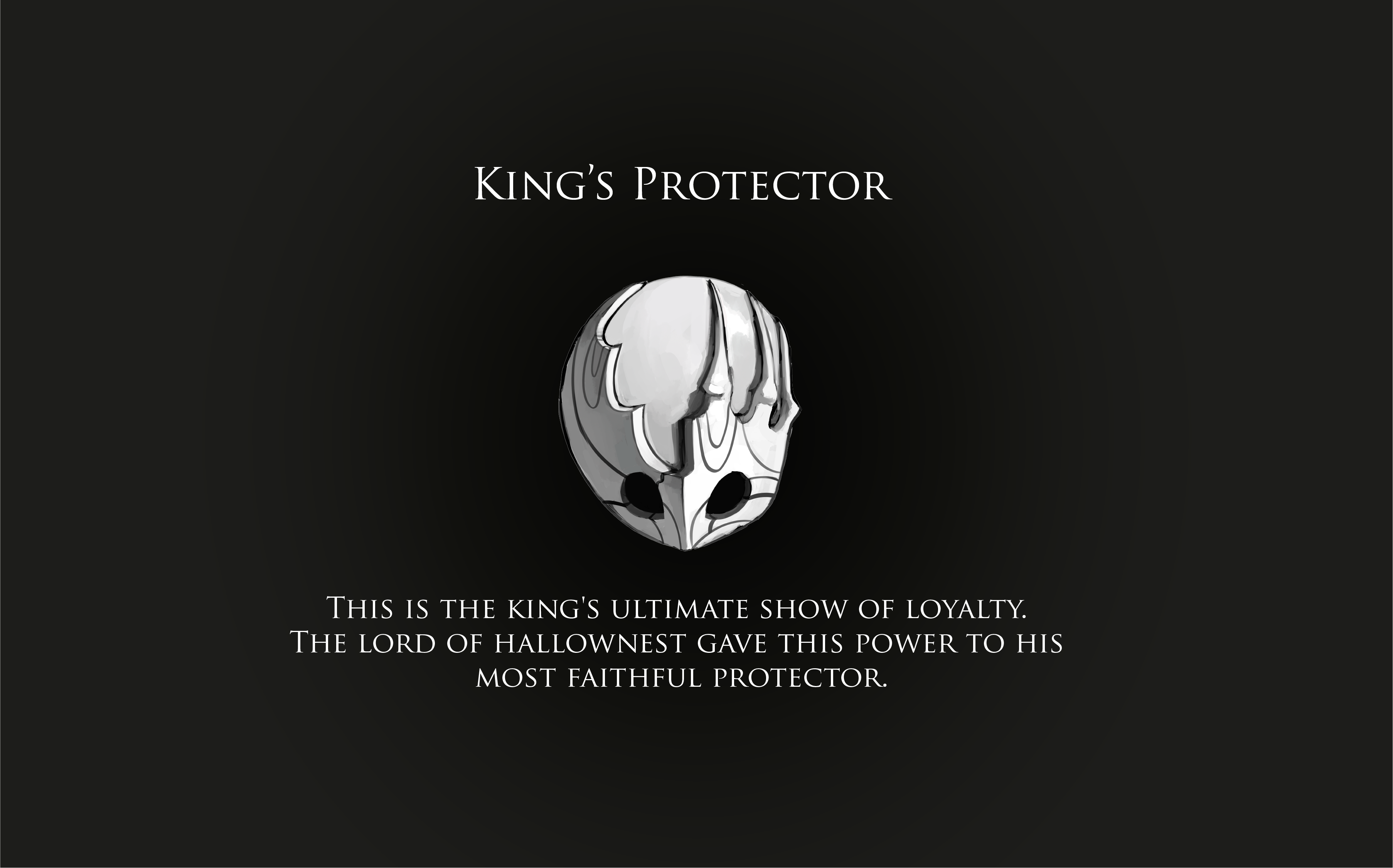 Being the most complicated area of the game in which few players manage to overcome it, it will be the bravest who will get this unique reward. Having overcome, it will mean that the player has a perfect mastery of the movement mechanics of the game, which will be transferred both for the narrative part, combat system, and exploration of the game (the 3 pillars of the game that we have discussed above).

Once the amulet is obtained, it will be fused with the Kingsoul obtained from the pale king's throne or where the white lady resides. This fusion will result in the Pale Heart, the alternative to the Void Heart from the base game. 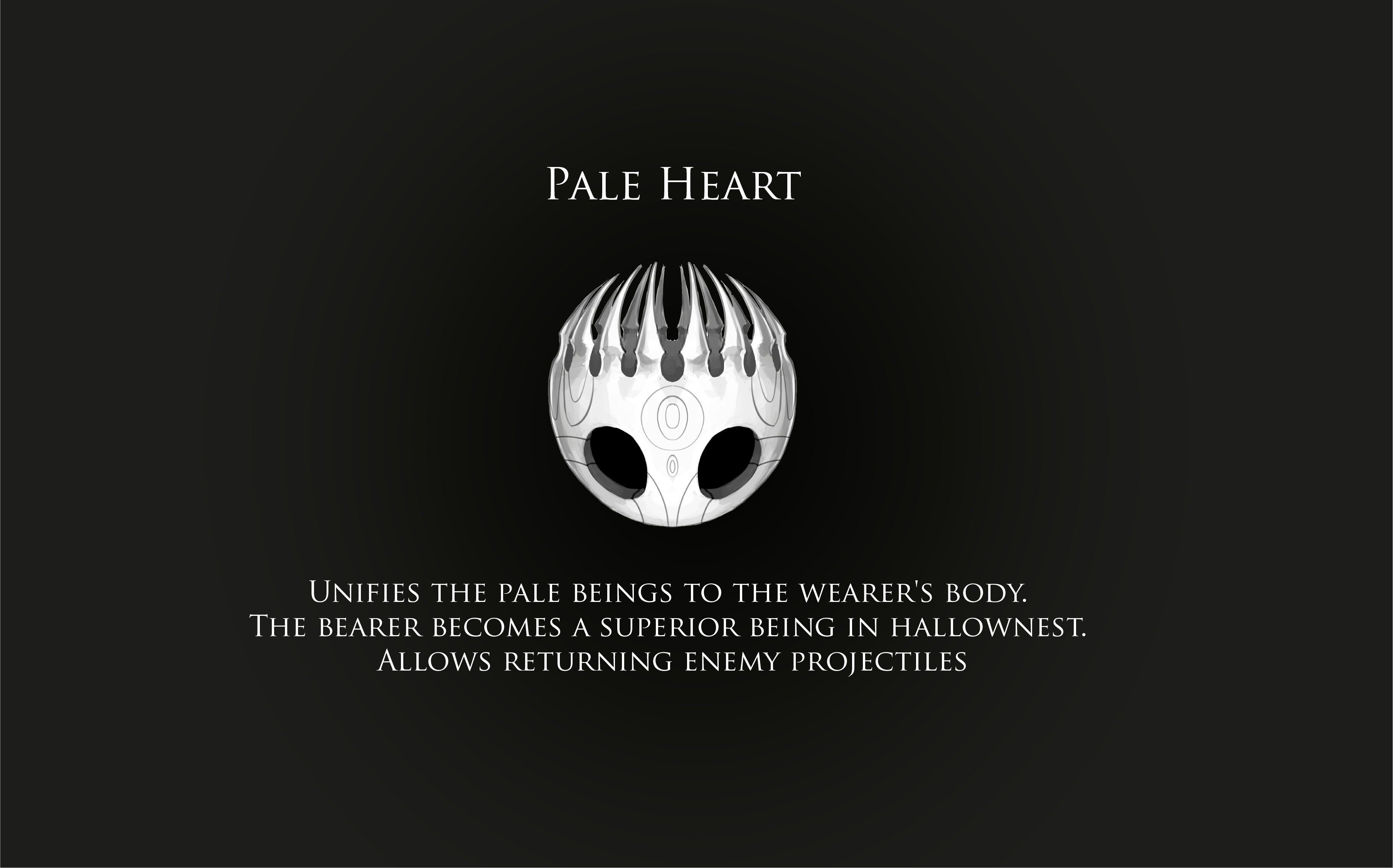 At this point the player becomes a pale being due to having gathered the power of the pale king and the Wyrm. The Wyrm are colossal beings that existed in the early days of Hallownest and had far greater power than Radiance has today, but for some strange reason that is unknown to this day, they gradually became extinct until only one of them survived and was reincarnated as what we know as the Pale King. As a result of this extinction, Radiance was able to unleash her power and spread the infection, which allows her to create a hive mind where all the insects of Hallownest are under her control. Our goal now is to kill Radiance by gathering the power of the Pale Beings to kill her instead of sealing her in the void as in the base end.

It should be noted that Hollow Knight has very simple gameplay mechanics in which most of them are carried out thanks to the stinger, so it is important to keep this at all costs. So starting from the narrative, we are now a pale being and technically we are the strongest insect in Hallownest so to keep the narrative, combat, and exploration we have decided to add a new mechanic that allows players with a greater desire to complete the game, enjoy exploration and combat without much difficulty. This mechanic is to parry projectiles. Thanks to it, you will be able to move around Hallownest without fear of being hurt or slowed down by a ranged projectile. All you have to do is hit the projectile at exactly the right moment, just as you do when parrying in melee combat. Exploration will no longer be a problem for players. This new mechanic is also implemented for both the game's bosses and Radiance.

Finally moving on to the real point of this article, the player will face Radiance. To make the combat more difficult since the player has overcome the path of pain and Radiance is probably not going to be too difficult a combat, a stage element has been designed to complicate the player's movement and attack, the spinning blades. These are the same blades that were seen in the path of pain and it has been decided to move them to the final fight since, by having a perfect command of the stinging blow with a metallic surface, the player will be able to be tenser and feel the risk of falling into the void and ending the fight. It breaks the combat structure of the player losing 2 lives when hit by radiance to instead add the possibility of losing the fight instantly. However, the player who experiences this new combat mechanic will not have a problem and will experience the situation with much more intensity and knowing what is at stake. The player will be able to have several charms equipped that will give him several lives but if he falls from the blades, it will mean the end of the combat. 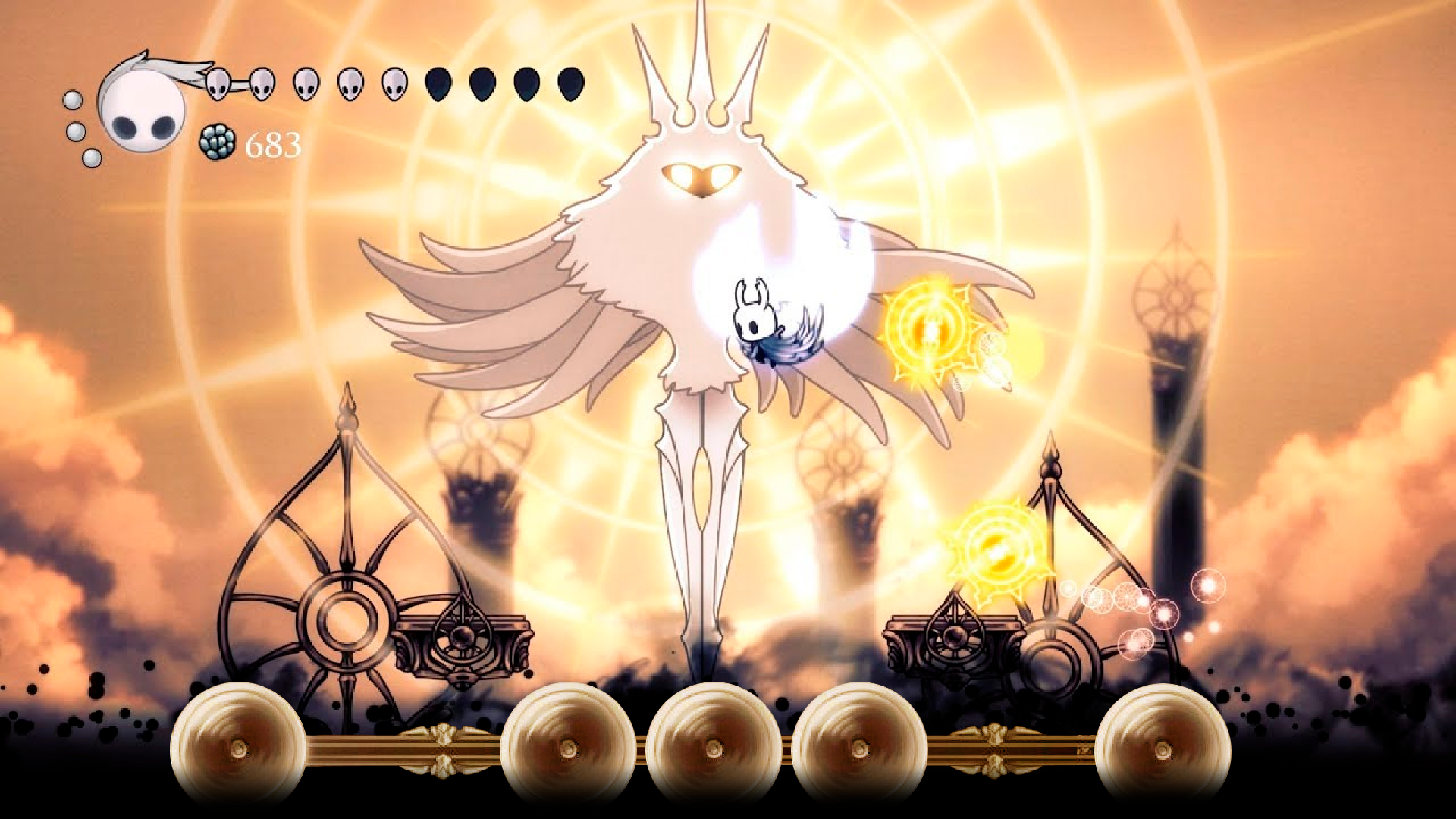 As an advantage for the combat, our character will be able to return the yellow projectiles that Radiance throws, showing this superiority and rivalry between who is more powerful of the two. Finally, after defeating Radiance, the cinematic (narrative) will change. Instead of the brothers and the God of Gods appearing as in the base ending to take Radiance into the void and seal her there forever, several Wyrms will appear including the Pale King, who will destroy Radiance with their great power mentioned above. This will be the end of Radiance.

The player will be able to gather information about this new alternative heart from 3 different NPCs within Hallownest.

As it has been said and insisted from the beginning, environmental storytelling is the most representative point in the Hollow Knight narrative. It is the little details and mysteries hidden in this underground realm that allows players from all over the world to create the game's lore, offering alternatives to both base mechanics and game endings. This is one of the things that makes Hollow Knight most special, the opportunity to understand every mechanic, every sound, and every space as a set of interconnected things that make for one of the best video games ever.

Special thanks to Ana Piedrafita for the sketches of the charms.