[In the spirit of community, and for the sake of education, International Hobo's Chris Bateman has provided a rare public look at an in-depth commercial game design document. The game, here tentatively titled Fireball and targeted for the PlayStation 2, was released for the PC by Manifesto Games with the new title of Play With Fire.

A second document was also provided, the Fireball Field Design Guide, which can be downloaded in *.doc format here.] 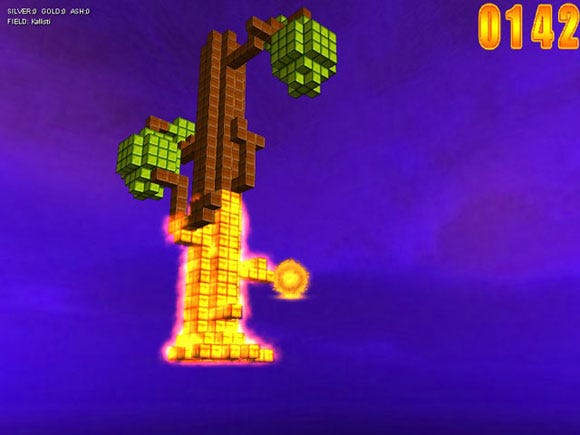 Example level from Play With Fire

Fireball is a budget game for PS2. The player controls a ball of fire, and traverses a landscape made of blocks of different materials. As the player sets fire to these blocks, they grow hotter, and can set fire to more and more different types of blocks. The fireball the player controls can also rise up in height and the hotter the player gets, the higher they can jump in this fashion.

On each field (level) the player has an ultimate goal of igniting the torch (brazier) and thus clearing the field – but the torch is generally positioned at a high point and out of reach. The player must use a combination of platform skills and dynamic environmental features (for instance, by burning the supports under the torch down to the ground) in order to clear the field.

Simple, clean cut graphics and controls combine to give an easy to learn but engaging play experience.

The player should be delivered the following experiences:

There are two options for the brand image for the game, and which is used depends entirely upon the needs of the choice of the publishing partners:

· Fireball Brand: this approach targets impulse purchasers and is suitable for where the primary sales channels for the game are in mass market catchment areas e.g. supermarkets. In this case, the game packaging should draw attention to the fact that it is Easy to Play, in order to appeal to the Casual audience, who typically finds most games are too hard to control.

· Hidama Brand: the Hidama (Japanese for ‘fireball’ or ‘falling star’) approach is targeting the Hardcore gaming community’s desire for new and innovative product. A Japanese sub-title for the game serves to intrigue, and suggest that this may be an interesting and hitherto overlooked title (such as Katamari Damacy). The game packaging should draw attention to the games Unique Gameplay. This approach is best suited if the publisher is expecting to sel the game primarily through specialist game shops or online.

A hybrid approach may also be undertaken.

All the play in Fireball originates from three simple to implement core subsystems:

We will discuss each in turn.

The player’s Avatar is a glowing ball of fire, considered to be 1 unit in diameter. The player’s abilities are as follows:

These are all the player’s abilities.

The basis of fire starting rests in a simple system of temperature based upon colours. The avatar increases in heat permanently when it touches a burning block that is hotter than the avatar’s current temperature.

The following is a description of the jump profile for the fireball:

· Press Jump to begin the jump. In less than a second, the fireball goes up in the air by +x units, where x is determined by the current temperature.
If the player initiates jump with Triangle, they also get a top down view, so they can judge their landing place.

· Drifting begins immediately. The player descends at the rate of about 1 unit per second.
At any point, the player can use Triangle to toggle between a top down view and a regular view.

· Slam by pressing the appropriate control. The fireball descends almost instantly to the shadow-point and explodes – possibly igniting everything at this point. The slam fires are at a temperature one higher than the avatar’s current temperature.

Note that it is not possible to jump again once in the air – the fireball must be in contact with a block in order to jump.

Also note that there is no quick way to descend except for slamming.

Whenever the player slams, they raise every block in a 3 unit spherical radius of the point of impact (or point of explosion if they were on the ground) up to one higher than their current temperature. (The colour of the explosion effect should correspond to the higher temperature).

If this temperature is high enough to ignite a block, the block begins burning.

The player’s goal is always to move, burn and melt their way around the environment in order to reach the torch – a symbolic brazier item – which they ignite on contact.

As soon as this is done, the playing field is cleared.

Advanced players will attempt to clear the playing field in the shortest play time, and/or cause the biggest Chain – achieved by having large number of blocks burning at the same time.

The player scores more for big Chains, and their score contributes to an overall progress mechanism which unlocks new collections of levels and simple cosmetic rewards.

Increasing avatar temperature is (usually) one of the key steps the player undertakes towards their goal. To overcome various barriers, the player must often become hotter. This is achieved by touching a block that is burning at a higher temperature than the avatar. This can happen:

Once the avatar temperature increases, it is permanently at the higher degree for the rest of the current field.

Although it is not the player’s stated goal to get a big Chain, the game is structured to imply that ending the level is not really victory – getting a large Chain is victory. This allows players to find their own level of challenge… If just reaching the brazier is challenging, the player will feel satisfied by this goal. If not, scoring a high Chain will seem like the goal, with the brazier merely being the end of the current field.

The size of the current Chain is equal to the number of blocks currently burning.

The size of the text which displays the current Chain count depends upon whether or not the Chain number has been growing or receding. A strict rubric defines this relationship:

If the text can only be displayed at certain discrete sizes, then the Font Size variable should be used to test whether or not the threshold for the next font size applies, rather than as a direct scaling factor.

The fields in Fireball often present mini-puzzles. Sometimes, these puzzles can end up in states from which the player cannot reach the goal. For this reason, a control is provided (Select) to quickly and easily restart the field ideally without any noticeable loading.

It is expected that normal play will involve a fair amount of resetting.

The environment is entirely constructed out of 1 unit cubes (actually about 4 m per side, therefore 1 unit = 4 m). These cubes have different colours, and are textured to resemble specific materials.

Objects are simply clusters of blocks. For instance, a vertical column of ten blocks is an object. Four such columns with a flat plane of blocks across the top is a ‘Table’ object.

Clearly, because objects are made of cubic blocks, they are abstract in nature, but the player will still be able to make out what these objects represent.

Objects fall vertically downwards until any one of their constituent blocks hits another block underneath – then they stop. This applies, even if the resultant structure would look physically impossible. As long as there is a block underneath, the object will balance where it is.

The following are the types of Block that all objects are made of:

*In fact, ignites slower except when exposed to extreme heat.

No block may ever be at a heat level higher than that shown in its Burn column or Melt column (whichever is higher).

The following table shows the tints of blocks when they are melted or burning:

The temperature at any point in the game field (for the purposes of checking for ignition) is based upon the temperatures of the surrounding blocks. The process of determining if any given block ignites is as follows:

· Check for neighbouring blocks of the same material that are on fire, and have been burning for at least as long as the ignition time. If they exist, the current block catches fire.

If not, calculate the Effective Temperature for that block:

· Burning blocks within 1 unit (including diagonals which are technically 1.4 units away) provide 0.5 of their burn temperature.

· Burning blocks within 2 units (including diagonals which are technically 2.8 units away) provide 0.1 of their burn temperature.

· Burning blocks within 3 units (including diagonals which are technically 4.2 units away) provide 0.02 of their burn temperature.

Blocks are only counted as Burning if they have been on fire for at least as long as the ignition time for their relevant material.

The three parametric values above are the temperature radiation coefficients (TRC1, TRC2 and TRC3). The values given should be considered default values – tweaking will be required.

Ignition takes 1 second. During this time, the block is considered to be at 0 temperature (not at its burning temperature). Only once it is alight does it take on its new temperature.

For example, consider the following example (in 2 dimensions):

0 seconds: The tree begins burning at the centre top (as indicated by the ‘1’ – which is the temperature for burning leaves):