Join me as we discuss the process of developing one of the bosses of 3D Brawler "Obey Me", focusing on challenging the player and breaking their expectations.
Nicolas Lince
Blogger
February 09, 2021

Hello everyone! My name is Nicolas Lince, and I’m the Lead Game Designer at Error 404 Game Studios. Today I will talk a little about how the Angelical echo fight went on, from his Original Idea to the Final one you guys can play on Obey Me and some thoughts of the design.

But first… What is Obey Me?

“Obey Me” is a frantic 3D Brawler that revolves around a duo of misfit demons as they fight hordes of mutants, hellish fiends and angelical contraptions alike.

In a time and age much like our own, Heaven and Hell are locked in an eternal conflict where the souls of Mankind are at stake. Vanessa Held, a lowly Soul Huntress, and her Hellhound companion, Monty, could be the ones to tip the balance of the war with their own hands.

Now that you are up to date with Obey Me, let's get down to business shall we?

After finishing the Boss Design of “The Purifier” ( Chapter 8 Boss) we started to think about our next boss and how we were going to shake up things a bit, so far we made up to 5 bosses at this point in development. We were feeling more comfortable with them, but then an idea popped up over our heads, What if we challenged the player in other ways than you would not expect? And even more, we asked, What if the next boss was a Shoot‘em Up boss? It was nonsense at first. Still, we started to think about how this would not only challenge the player like no other boss before but also break some conventions over Beat ‘em Ups. To make the player think outside of the box on how to deal with enemies.

With this in mind (and one approval from our producer), we embarked on the quest of trying to make a Shoot‘em Up Boss on a Beat‘em Up. So how did we start?

For starters, the concept of the Angelical Echo was one recurrent idea I always had in mind. It was of a boss that “played” like an Orchestral Director. Giving instructions and every move he made corresponds to a different skill or ability, so with this in mind, we had a boss that can drop skills uninterrupted to the player to dodge. This boss was perfect for executing that idea.

As well as all the rest of the Boss Battles on “Obey Me” had one single rule, “being different from each other.” As you can see in the Boss Battles against Ors (Multi-phase Fight) or Dranea and Ximala (Enrage Fight), they always had a single mechanic to make them stand out. But in the case of the Angelical Echo, we went with a Two-Phase Incremental Fight, so what's that you might ask? Let's Break it Down:

The core of the fight resolves on weakening the Angelical Echo into a state in which he could be damaged. So you will have Two Distinct Phases, Weakening and Damaging. In the Weakening Phase, we wanted to challenge the player with something that they should have, at this point in the game, pretty much mastered, that is, the Warp Skill. As we planned on future encounters to be more punishing, difficulty-wise, this fight will be the one that would force the players to step up their game by applying the skills they learned up until this point. For this to happen, we needed the players to ONLY focus on warping until they activated a specific trigger, so during this phase, the enemy would be invulnerable.

When certain conditions were met, the player will enter the Damage Phase, in this phase we make it so that the player had to damage the boss within a limited time. Hence, position and resource management were key for inflicting the most damage possible. This short window would always last the same time, but it would signal an increase in the Boss’s difficulty if it survived the phase 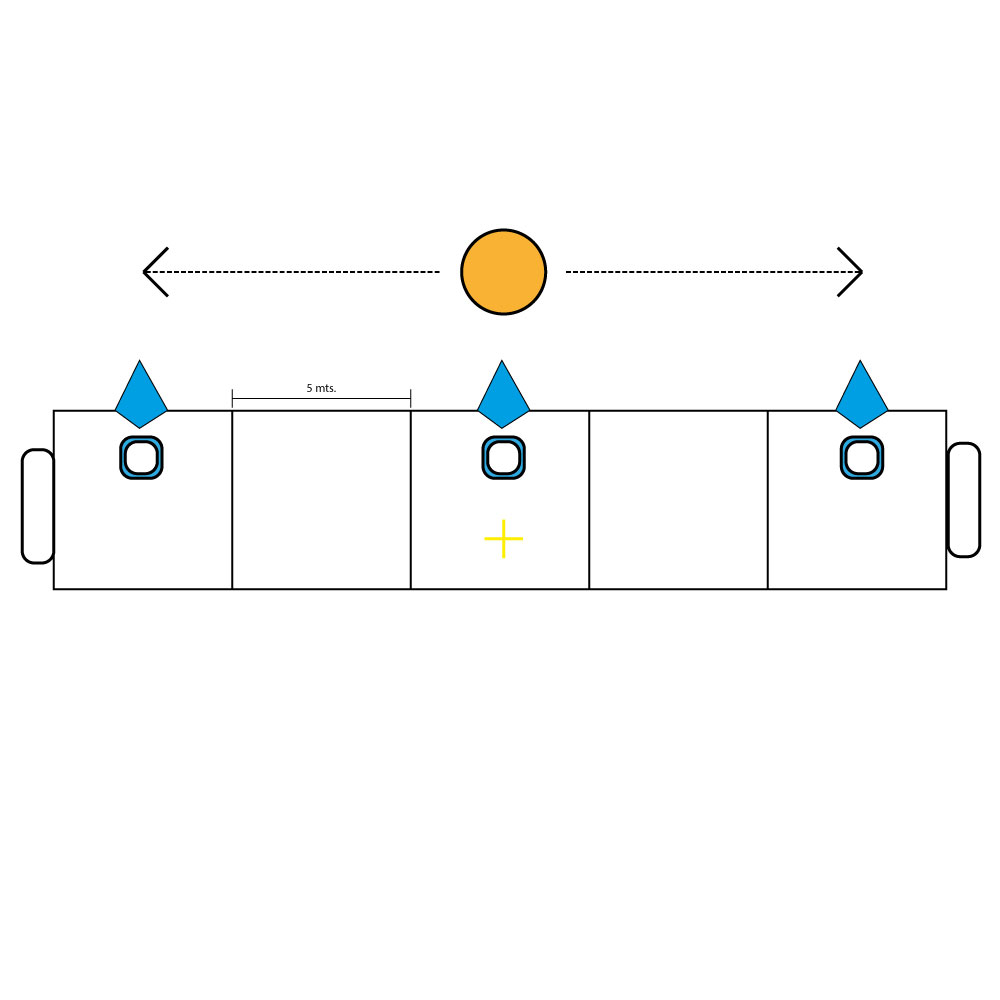 So far, we have two very distinctive phases for this boss battle. But you might consider that it could become very stale quickly if it takes too much time. By the very nature of the flow the boss battle has (Weakening<->Damage), we needed the fight to scale for different players properly. For this reason, we established three threshold points over the Boss HP, and the players reached the thresholds, it would increase his power significantly for both of his phases.

In the Weakening Phase, we had to regulate the usage of the boss skills, creating an index of each one and organizing them into a “Casting Order.” The boss had two types of skills Basic and Special, and we planned how they would roll out across each threshold, including overlapping the skills the further deeper we got into the phases, increasing the difficulty proportionally to the boss missing health. 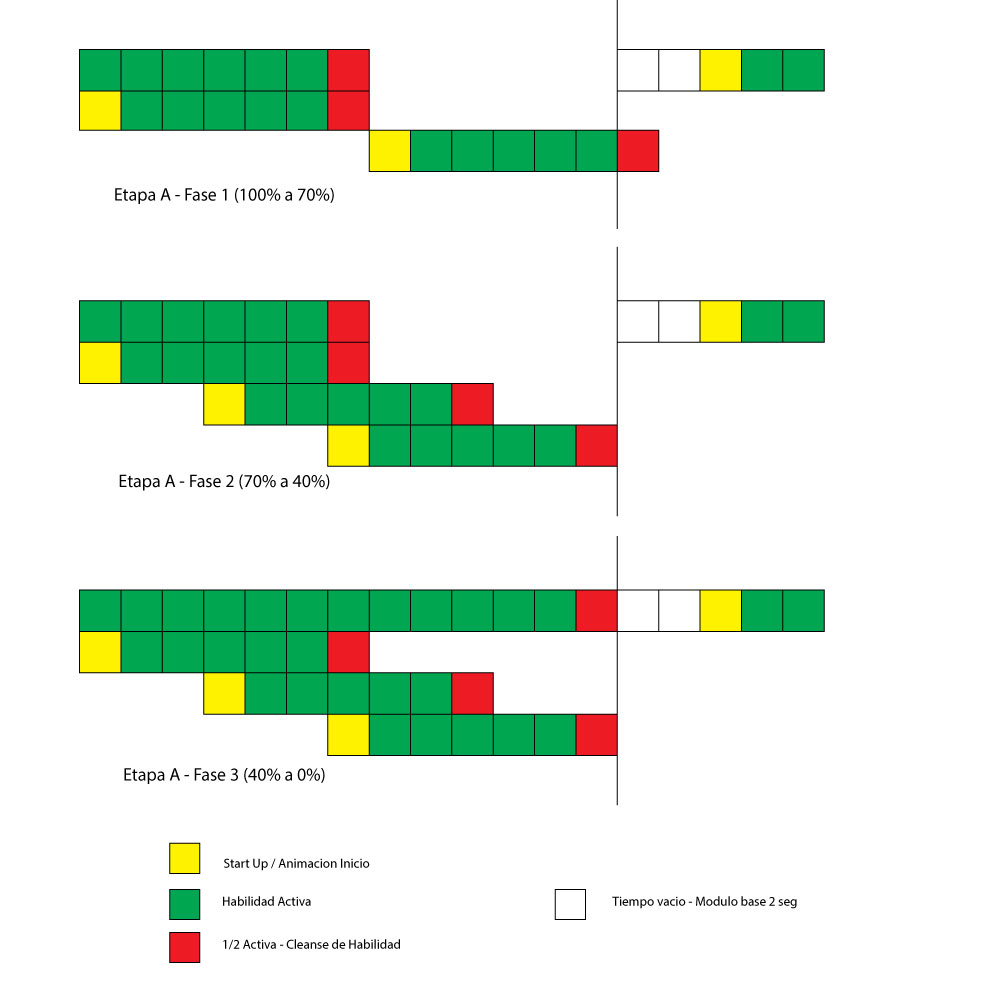 For the skills itself, we first designed some patterns over and prototyped them with the intent to generate different responses from the player, and eventually overlap one another as we just told. This task was challenging because if one combination of skills would not work (or work too well), that would mean that we needed to discard one or the other, and that could cascade in scraping a lot of them. Thankfully with the bases of what we wanted to achieve in place and the swift prototyping of the skill, this process was an excellent opportunity to learn a lot of design patterns and how to generate similar responses from the player by using different skills and combinations.

“Inquisition Beam” one attack that did not make it to the game...

Meanwhile, over the Damage Phase. We increase the intensity of the fight in those thresholds by adding enemy spawns that increase in amount and Difficulty (we start with one basic Drone, and by the last threshold we unleash three advanced units that chose their parts at random). Keeping the player on their toes as the units will try to gain as much time possible for the boss to recover, and if the units aren’t dealt over the Damage Phase, they will be a part of the Weakening Phase and increase the difficulty even more. So the player has to choose how they are going to deal with these increasing challenges the more the fight drags on. 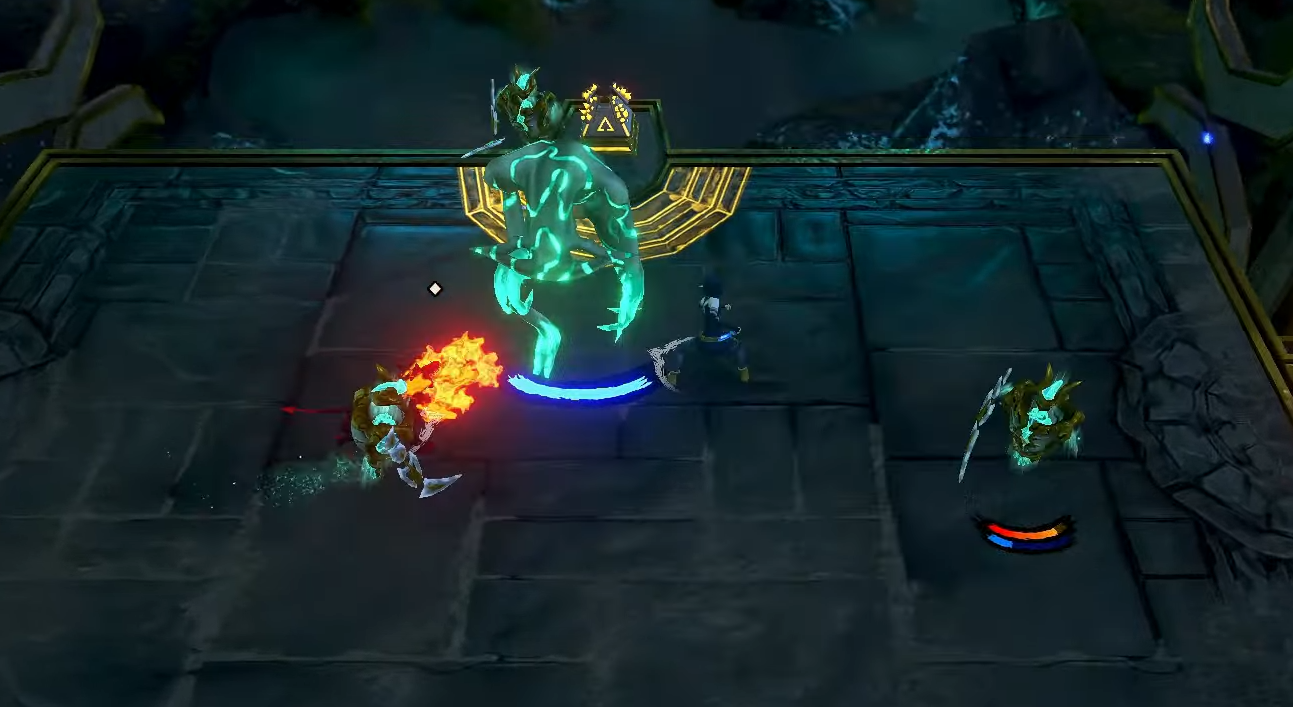 Angelical echo and his faithful Minions

One of the biggest problems we had with the fight was how to connect both phases and make it seem seamless. Initially, we designed a device that would get charged on its own, this device would not require any input of the players until it was fully charged, but as we tested it, we only made the Weakness Phase last longer and longer. At the same time, we found that even if we wanted to let the players only focus on avoiding the boss’ skills, at some point, they would need to shift into the offensive to trigger the transition between phases. With that in mind, we changed the way the phase ended. Using a Level Mechanic introduced earlier in the level, we placed two pillars that would charge with the player attacks. Once both pillars were fully charged, they would stay that way until the player decided to activate the device and trigger by himself the transition to the Damage Phase.

This change significantly improved the flow of the fight as the player could determine by himself when would be an excellent moment to keep dodging and when to charge the pillars. Bear in mind that these pillars had a difference with the ones encountered in the level, these would not retreat to their base if not being continuously attacked, so you can charge up this by small amounts and eventually get the phase transition ready to trigger. The Angelical Echo fight was a turning point on Boss Battle design in “Obey Me” development. The improvements made to the flow of combat rippled to other aspects of the game, past, and future (Especially on the Final Boss). It set the bar pretty high for everyone in the team. We could have been doing things differently over the development of this boss. (For example, the original camera position was a little farther and allowed a better FoV of the entire Combat Arena) But these mistakes are what as developers help us to push forward and evolve the more we iterate and try different aspects of the game. One of the best lessons this Battle left me was the importance of Flow and how different genres can coexist in the same place (Brawler + Shoot‘em Up in this case) while not overriding one another.