Design 101: The Role of Randomness

It's the dynamite of game design. A powerful tool, but if you're not careful it can blow up in your face.
Game Developer
Staff
September 16, 2015

Hey everyone, welcome back to Design 101. Today we’re going to talk about one of the most controversial aspects of game design, the role of Randomness (or RNG). Few topics inspire more passion in designers and player communities alike, especially in strategic titles. We've got a lot to get into, so let's get started.

RNG - The Hated One

RNG has a truly terrible reputation among many gamers, particularly competitive players. There are a huge number of reasons for this. Here are just a few.

However, if randomness was universally bad then no one would be playing cardgames. Many competitive players decide to dedicate themselves to mastering a title in this genre. Just check out the MTG Pro Tour Circuit and the sheer amount of strategy content generated each and every week purely for that game's competitive play.

If games were just better without randomness, especially for competitive play, this wouldn’t be possible. What’s going on?

It's easy to see the issues with RNG. I've seen many new designers seek to improve their favorite genres by eliminating it entirely. Yet RNG is just like any other tool. Properly used, there are many different benefits it can provide your projects.

When we play Magic: the Gathering things are completely different. I’ve actually spent even more time studying MTG than I’ve ever spent on Chess. Despite this, the random elements mean that my friends always have a chance of winning. We can enjoy playing together.

While the tension of randomness can sometimes feel unpleasant, having no tension is even worse. Even against an equal opponent, many games can start to feel boring once you’ve won a significant advantage or taken a significant setback. You can either lose hope for victory or any fear of defeat.

Randomness provides an element of uncertainty that can help address this issue. No matter how well I’m doing in MTG, there's almost always a card that my opponent could use to come back. While they might not have it in their hand or deck, I don’t know that for certain. Even while I’m far ahead of my opponent, I focus on looking for ways to minimize my opponent's’ chances of coming back with the right draws. Is there a way I can turn my 90% chance of winning into a 95% chance instead?

Meanwhile, when I’m far behind I’m always looking for ways to maximize the number of chances I have to draw the card that can save me. This keeps me engaged in the game until the very end.

I know this sounds crazy, but give me a second to explain.

Imagine two math competitions. In the first, there are always the exact same problems with the exact same answers. Anyone can spend a bunch of time memorizing the solutions that skilled mathematicians worked out years ago.

In the second competition the problems are randomly generated by a supercomputer. Some years you might get lucky and get a lot of problems that explore areas of math you know well. Even so, the people that actually understand mathematics get the advantage here. You can’t improve through rote memorization.

You've probably noticed the first competition sounds a lot like Chess. Well designed randomness works like the second competition. When randomness provides a different assortment of cards and considerations each game, the best way to improve your overall performance is through learning the game’s core strategy. It rewards the ability to genuinely analyze the right move.

I'm currently working on a digital card game called Faeria (which you should totally check out when it releases). At the moment we’re testing a card called Bold Bargainer. It looks like this:

When you summon Bold Bargainer, reduce the cost of a random card in your hand by 6 faeria.

Faeria is the game's core resource. You stockpile it over your turns and use it to play your cards. Playing Bold Bargainer means that a random card in your hand is going to get its cost reduced by 6. This is a huge discount. If you can take full advantage of it, you get a decent creature for free. However, you can't reduce a card's cost below 0. If the Bold Bargainer's ability randomly selects a card in your hand that costs only 1 faeria, you're going to lose a lot of value. 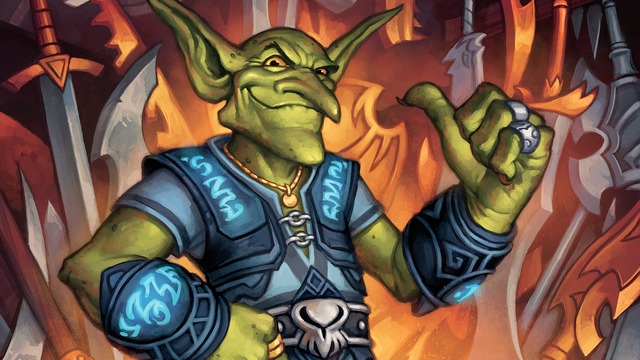 This simple design has deep strategic implications. The first thing it affects is your deck construction. Bold Bargainer is clearly best when everything in your hand costs 6 or more, to ensure that it will hit something you want it to. Cards that cost less than 6 faeria are suddenly significantly worse in your deck than normal. Meanwhile, more expensive cards naturally become more desirable.

But it doesn’t stop there. Bold Bargainer also gives you strategic decisions to make while playing. Because you can't really afford to just run cards that cost 6 or more faeria, you're going to have to include some cheaper cards in your deck. When deciding which cards to play each turn you might want to keep higher cost cards in hand when possible. This will maximize your eventual chances of hitting a good target with Bold Bargainer.

Additionally, getting a hand with absolutely no cards that cost less than 6f, while you also have enough resources to play the Bargainer, can be difficult. You might realize that playing the bargainer before you can ensure its value is actually the best move. Sometimes you need an extra creature on the board right now, or you just have to accept the risks of not reducing the cost of the card you really want.

Now let’s compare it to a version that doesn’t use RNG.

When you summon Less Bold Bargainer, choose a card in your hand. Its cost is reduced by 6 faeria.

The Less Bold Bargainer doesn’t take much skill to play well. You can put it in just about any deck that has at least a few high cost cards. Just wait until you draw just one to combine with it. You don’t have to think about hand-management nearly as much. Also, when you do have several high-cost cards in hand you’ll just reduce the cost of the one you want to play sooner. That's a decision, but it barely adds anything to the normal decision-making process of what you want to play. Fewer deckbuilding decisions, fewer gameplay decisions, overall a much less skill-intensive card.

Randomness is an Emotional Safety Net

Many players claim they hate RNG, yet keep coming back to games that use it. They’ll often try games that announce they’re removing RNG from the experience, but eventually they’ll wander back to Magic and other games with randomness included.

There’s a pretty simple reason. When someone loses a game of Magic, she can blame her loss on the game’s luck. When she loses a game without RNG, she can only blame herself. Weirdly, players tend to credit their victories to their skill and blame their losses on bad luck. This is a well-documented psychological effect, and it lets people feel better about themselves while playing your game.

In fact, nearly everyone thinks they're above average in a lot of things.. You can find endless studies supporting this. Here's a quote from a relevant article:

"In studies, most people overestimate their IQ. For instance, in a classic 1977 study, 94 percent of professors rated themselves above average relative to their peers. In another study, 32 percent of the employees of a software company said they performed better than 19 out of 20 of their colleagues[...]

[...]Because even the worst driver may by chance avoid an accident, people are more likely to overestimate skills like that than concrete skills like che