Niantic - American developer of video games with augmented reality, which was founded as a Google startup in 2010, three years ago became famous for the project Pokémon Go. Many players liked the idea of walking around the city with a mobile device, collecting Pokémon. But as the years went by, the game was getting tedious.

That's why Niantic switched to Joan Rowling's novels and together with Warner Bros Games developed Harry Potter: Wizards Unite. The game includes many of the mechanics from Pokémon Go and was soaked in the atmosphere of magic.

But unfortunately, It couldn't repeat Pokémon Go's involvement or success.

Unfortunately, this time Niantic has developed a fairly standardized game with no high level of gaming content, adequate socialization of players, and progression of users.

A brief introduction to the game:

In Wizard Unite players have the role of discovery and recovery workers of foundables.

The user is on a map, it’s one in one synchronized with the map of his physical location. Various buildings and foundables are scattered across the map, indicating a magic creature or object that needs to be returned to the world of magic. As well as a variety of consumables and portkeys allow the player to move to another world.

To raise the foundable the player must come close to the mark, click on it, and then begin the process of returning (catching) the foundable. it consists of the fastest and most accurate reproduction of the glyph on the screen using fingers and display.

The foundables are divided into two types - peaceful and combat. And also on rarity and complexity. Ordinary, rare, and very rare. (This can be determined by the color of the light column, above the foundable).

If the spell is poorly drawn, or if the user cannot return it several times in a row, it may be lost and become inaccessible.

For each drawn symbol user spent one unit of energy.

Combat - foundables that need to be fought. To do this, the user places his finger at a certain point on the screen, combining it with a circle. Depending on the complexity, this circle can move around the screen.

Also, the user can defend himself against an enemy attack.

For each attack, one unit of energy is spent.

After a successful catch, the user gets a copy of the foundables and ranks pumping points depending on the type of find, as well as game experience.

Each foundable in the game belongs to one of the ten thematic sections: School of Magic and the School of Witchcraft Hogwarts, the legends of Hogwarts, the Ministry of Magic, etc.

Each section contains several pages of foundable. Often, for a creature or artifact to be considered as collected, it must be caught several times.

Each of the schools has its own rank when filling the rank of 100 - the user receives a reward - scrolls and runes. Scrolls are used to pump a certain school of magic (profession). Runes are used to launch battles in the Towers (about this further).

During the collection in the bottom left corner of the screen, the energy reserve is shown, which disappears with each cast spell. To refill the spell energy, you need to visit hotels, where you can restore energy every five minutes. Or a greenhouse where energy is supplied with spell ingredients.

Hotels - it can accommodate special sensors - dark detectors, which increase the generation of new foundables in the hotel area. You can increase it up to three times.

Greenhouses - You can grow certain types of ingredients from seeds.

The basic equipment of the user contains such sections as:

The ingredients are used to brew potions.

Potions help in a variety of ways during combat and to collect foundables. The brewing speed can be increased by repeating a certain combination of symbols above the boiler during brewing.

Users can select one of the three roles and develop it. This will be required to participate in the towers.

Standard roles - Tank (Magizoologist), Damage Dealer (Auror), and Support (Professor). Each role has its own set of abilities that will help it to pass through the towers. For example, Magizoologist can strengthen all players in a raid. And Auror can debuff enemies.

The user can then install the portal by scanning the surface and entering it.

When the user enters it, he gets to a certain gaming location associated with the universe of Harry Potter. There you can find rare finds, ingredients, and experiences.

At the moment, the towers are the only group mechanics of joint experience for other users. But the first 8-10 levels of the tower can be passed by itself. (Only 20). The higher the level of the tower, as well as the runes, the greater the rewards for the user.

To start the battle, the user chooses the rune of a certain subject. And becomes a queue waiting for other players.

After the player gets to the "floor" of the tower where he sees the opponents and enters into battle with each of them. Depending on the profession, the user can use the abilities to make it easier.

The battle is the same as the interaction with the battle foundables. Hit a circle, dodge an attack.

At the passage of the tower is given a certain amount of time and a fixed number of foundables. The more players, the more foundables on the floor.

After successfully passing the tower, the user receives special foundables, which can only be obtained by defeating opponents in the tower. And also a special rank score. Which will allow him to get the red books, that will be needed to pump the profession.

Events allow you to collect unique "green books" that the user needs for pumping professions. Events are usually held once a month. They differ in the tasks of collecting certain foundables within the event and performing tasks. Sometimes there are awards for avatar customization.

Daily mission and Every day assignments

Daily missions are represented by a standard set of 7 tasks, which do not change and are rather boring. The Daily Bonus is distributed over a month, with no special awards for daily entry and a series of entrances.

The developers from Niantic have been bothering themselves and created a lot of fanservice elements for the fans of the game.

They created a lot of different AR Mask elements. This allows you to customize the player's avatar and share it with friends.

Also, some of the elements can be obtained for certain achievements, or buy for gold.

There are two core loops in the game

In fact, it is an endless collection, for the sake of collecting, which is not have a very positive impact on the interest in the game at a later stage.

The second loop is the Battle in the Tower. In fact, it's a collective PvE content for which the character is pumping and collecting runes. At the highest levels of the tower, the collective participation of different pumping players is required. Fewer foundables are given for the tower's completion.

That's where the whole progression and high-end content in the game ends. 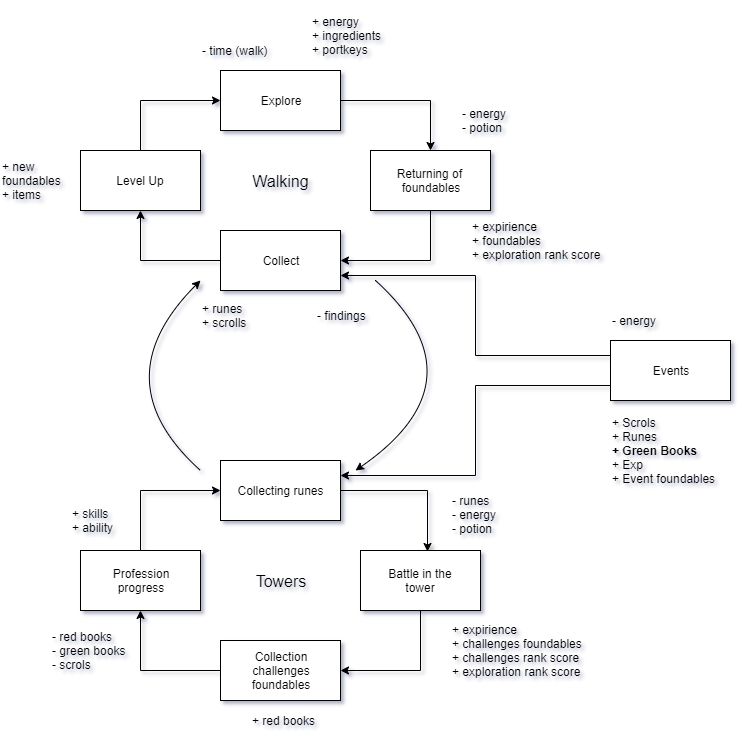 What needs to work on?

How's that gonna improve the game?