Reflecting on the core systems of Deceit. Going in depth on what they are, how they work and why they are core to the game.
Jim Arnett
Blogger
May 05, 2020

Deceit is a multiplayer first-person game full of trust and deception. The game begins with 6 players in an unknown location who have to escape. A third of the group/players are infected while the others are immune or just normal survivors. The goal of the survivors is to escape and the infecteds’ goal is to make sure the survivors do not escape.

Everyone in the game starts with a pistol and can scavenge around the spawn area for items such as ammo or other items such as a better weapon, a camera or light (lights slow the infected) or an antidote to save someone that had been attacked. There are blood bags around the map as well that only the infected can interact/drink they need to consume enough so when the power goes out they may transform. After a 90 second intermission the power cuts out and the players need to find the fuses and put them into electrical boxes, this is the only time the infected may turn into their true form. During the power intermissions, people may down each other and when downed people may elect to vote out the downed player. Once a player is dead they are no longer allowed to communicate with the living and can spectate anyone, which makes it more irritating if you knew who the infected were. This happens 3 times with the third powering the exit gate. 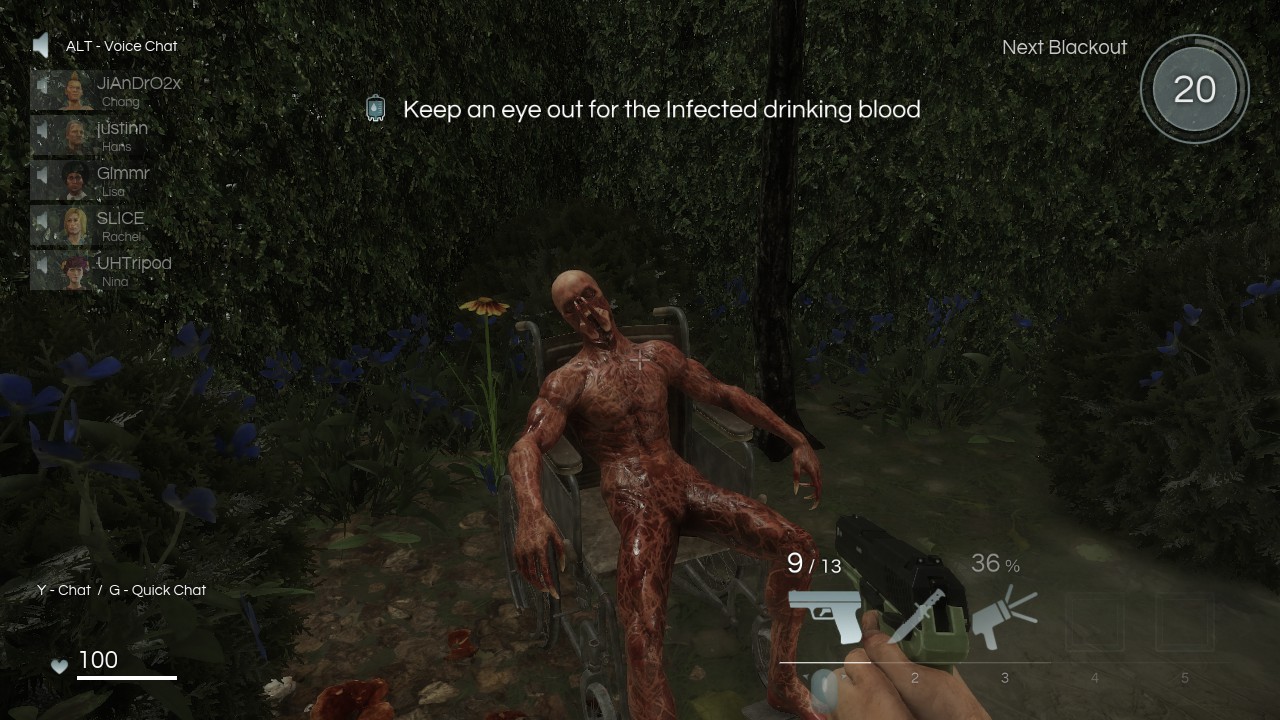 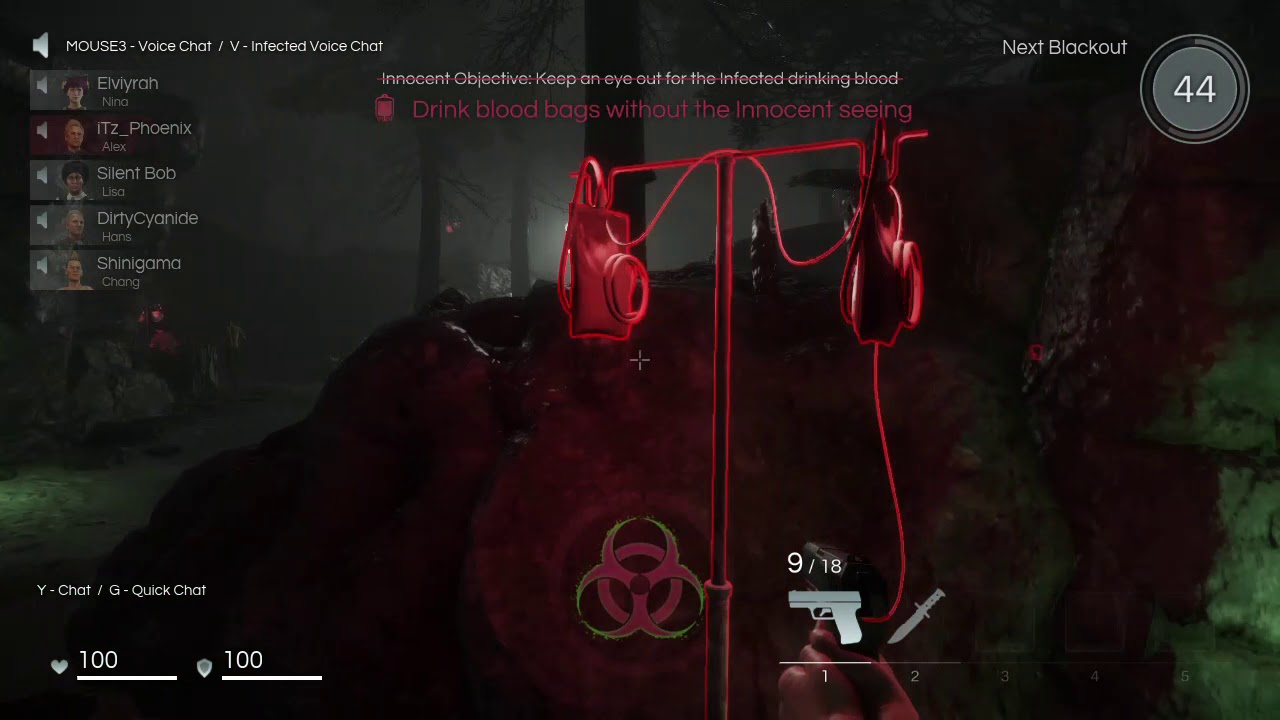 The core systems that make Deceit are its combat and social system. Both of these systems are essential to the game and are so intertwined with the theme that there is no way these systems can be removed and the remaining game be similar in any way

The first core system that is in Deceit is the combat system. It is very much an adversarial combat system between players. The system is a non-zero-sum due to intrinsic wins outside of the games boundaries. Playing with friends a person's “goal” or “win” will be just killing their friend at the least. There is a clear win/lose for both sides with either all survivors surviving or being slaughtered by the infected. Infected can die in their infected forms and come back either normal or infected depending on their character, but they can not die. Survivors can find health packs around the level if they take shots from other players or survive an attack from the infected. There is also body armor that reduces the damage of hits that the survivors take. 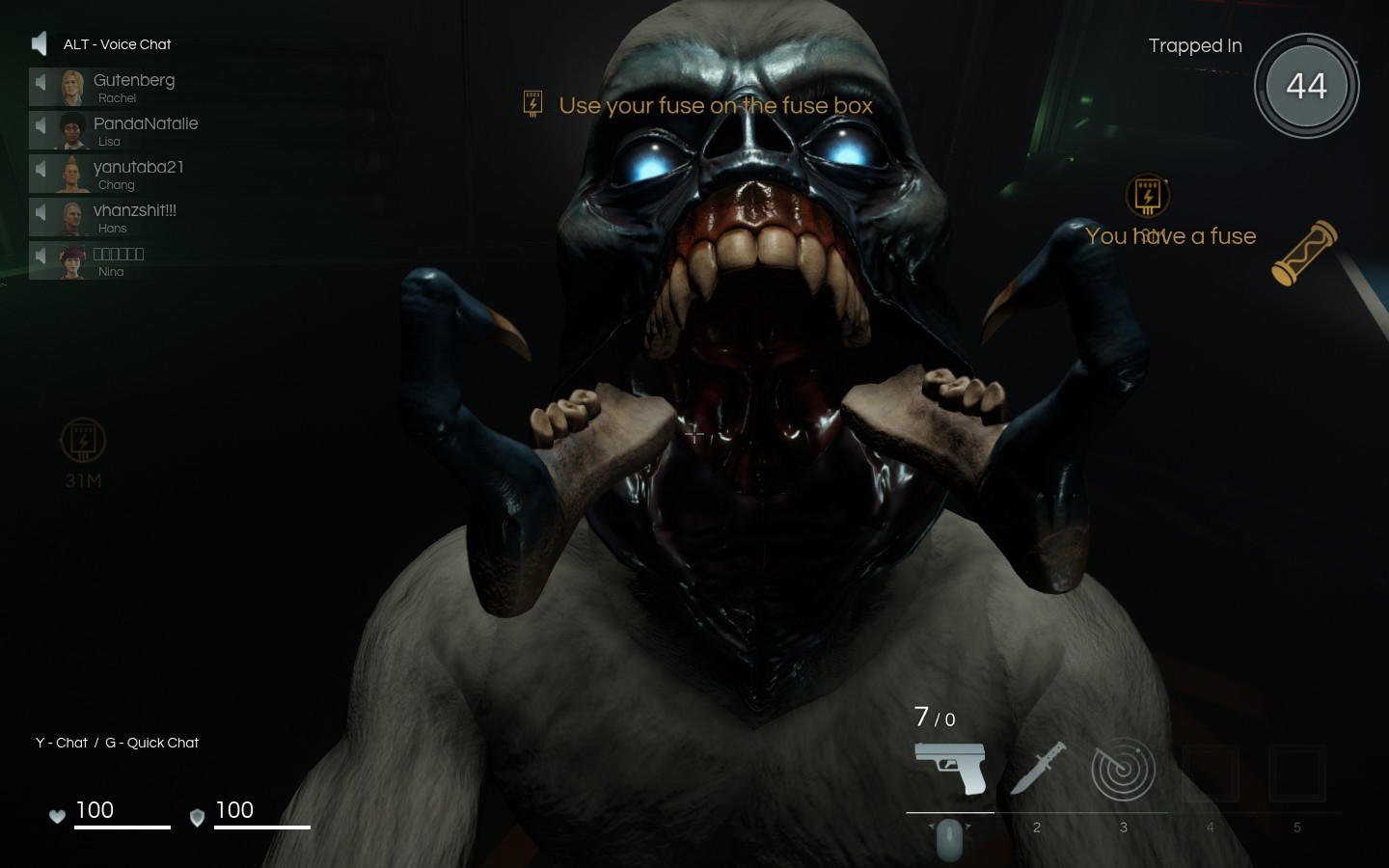 The game gets more exciting the more you play with friends, you start to learn their tells and mannerisms. This is core to the game as playing around with different people you evolve and act differently based on who you are with. Everyone is on edge and starts just accusing people for the smallest things that have no logic behind them whatsoever. People will go nuts on others for just turning the corner ahead of the group because they suspect they wanted to get out of the vision of everyone. Match this with a friend group and it gets more intense, everyone gets more aware of what one another is saying or doing. People who know how to control others or change people's perception with mind games really do well and know how to convince the survivors they are innocent as well. The game also allows for voice communication between everyone and there is a private channel between both the infected. 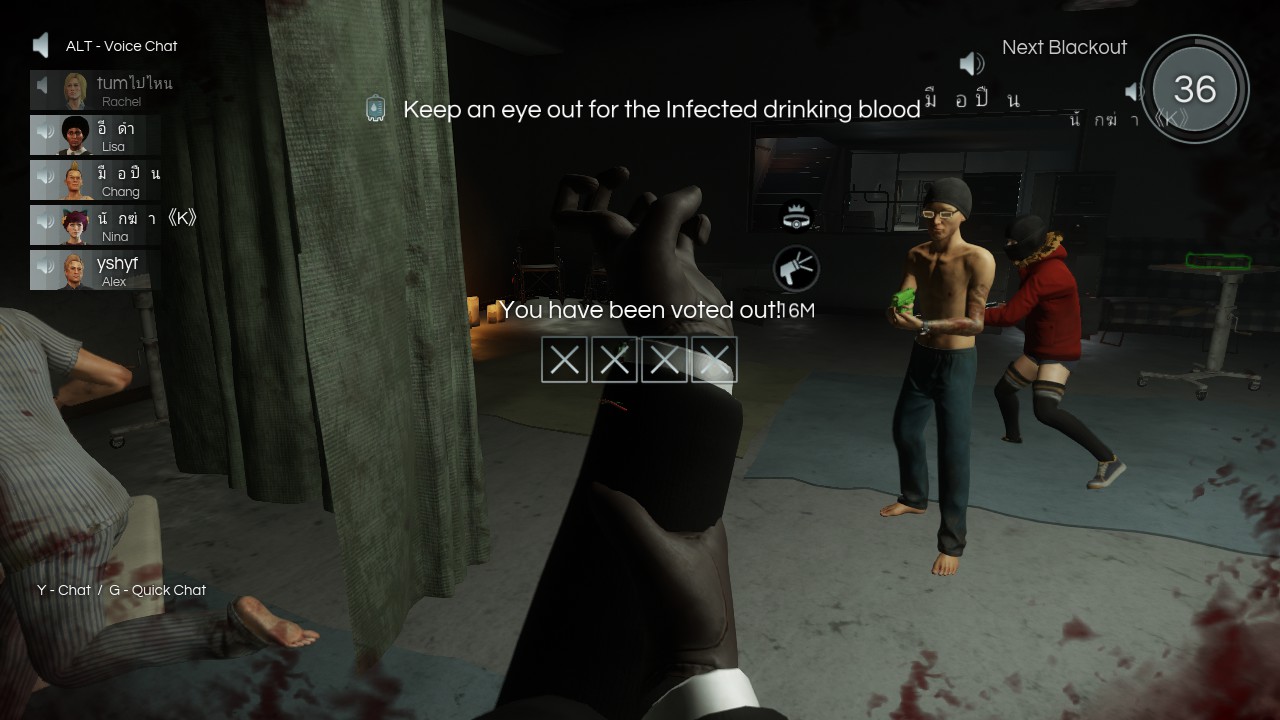 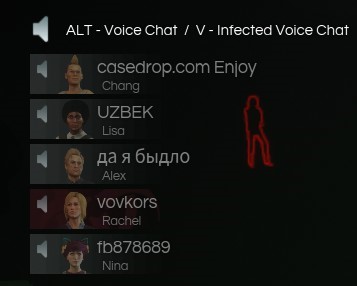 Both core systems are very much intertwined. These two are heavily dependent on one another, during the intermission phases between the fuse gather the combat comes into play with the suspicion of who is infected and is used to vote out one another. On another note the combat and attacking during this phase could be used by the infected to strategically lower the survivors health for easy kills but this in turn would raise suspicion between all the fellow survivors that the aggressor is probably the infected. The second phase, when the fuses need to be gathered, the social aspect becomes a little less prevalent while combat becomes more toward the front but thats not to say it isn't there. People start to be more vocal, roam together and make call outs of who is not around and what they are doing. While the combat rises more with the infected actually being able to turn into the infected monster and strike while the survivors fend them off and gather fuses together.

Why are these Core?

I chose these systems as the core because without them the game is completely different. It would have different goals, or rather it would give a different experience. When sitting down and thinking about what is essential for this game these are the two primary systems I had thought of. If you take away the combat aspect of the game I can not imagine how the game would play, it is an essential mechanic for one team to win. If you take away the social aspect it's not as intriguing or exciting, the entire concept of the game is to be deceitful and there are many ways a player can do that but very limited a bot would be able to.

The secondary systems within Deceit are its progression and looting system.

There is a progression system, which is one of the secondary systems within the game. This is the progression, perk system. This system is simple, the more you play and gather experience the more points you receive. These points are used to unlock perks that help impact the game and certain aspects of it. The reason I believe that this is a secondary system is the perks are kind of supplemental. They are certainly there to better the gameplay but they really have no effect like all of the changes they offer are really minor/minimal. 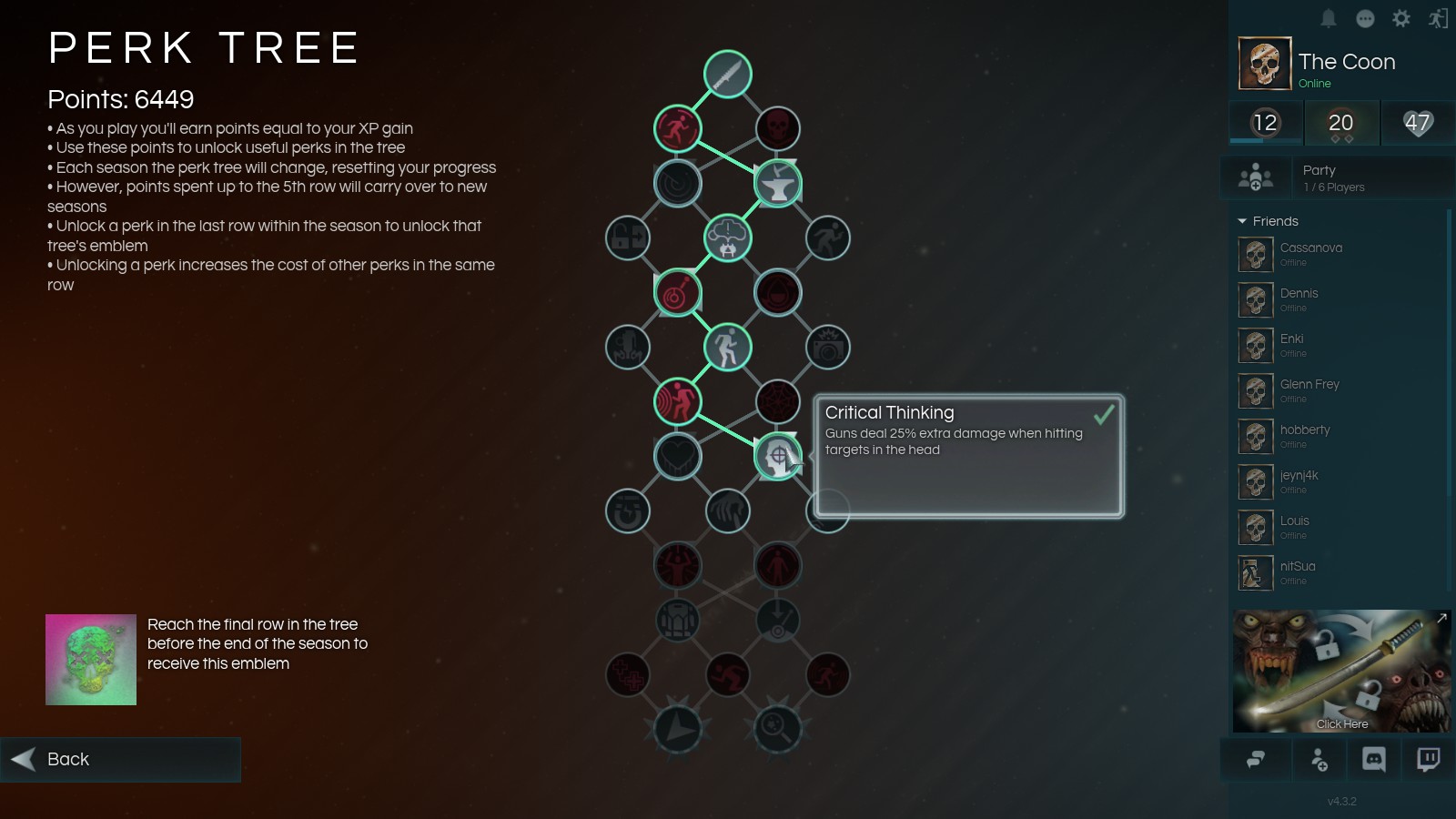 As I stated in the gameplay during the game players can loot items to help towards their goal of survival. This system could easily be a core system if we say the fuses are part of the looting system, but excluding the fuses to power the rooms the looting system only exists to add flavor and more entertainment to the game with the couple of items that can change the game up. Items such as a inspection kit that allows a person to inspect another player’s role, or the lethal injection that instantly kills anyone and takes them out of the game without voting. These could easily be taken out of the game and creating a tweak to the game with the pistol the game would still exist in its ideas it just would not be as exciting. 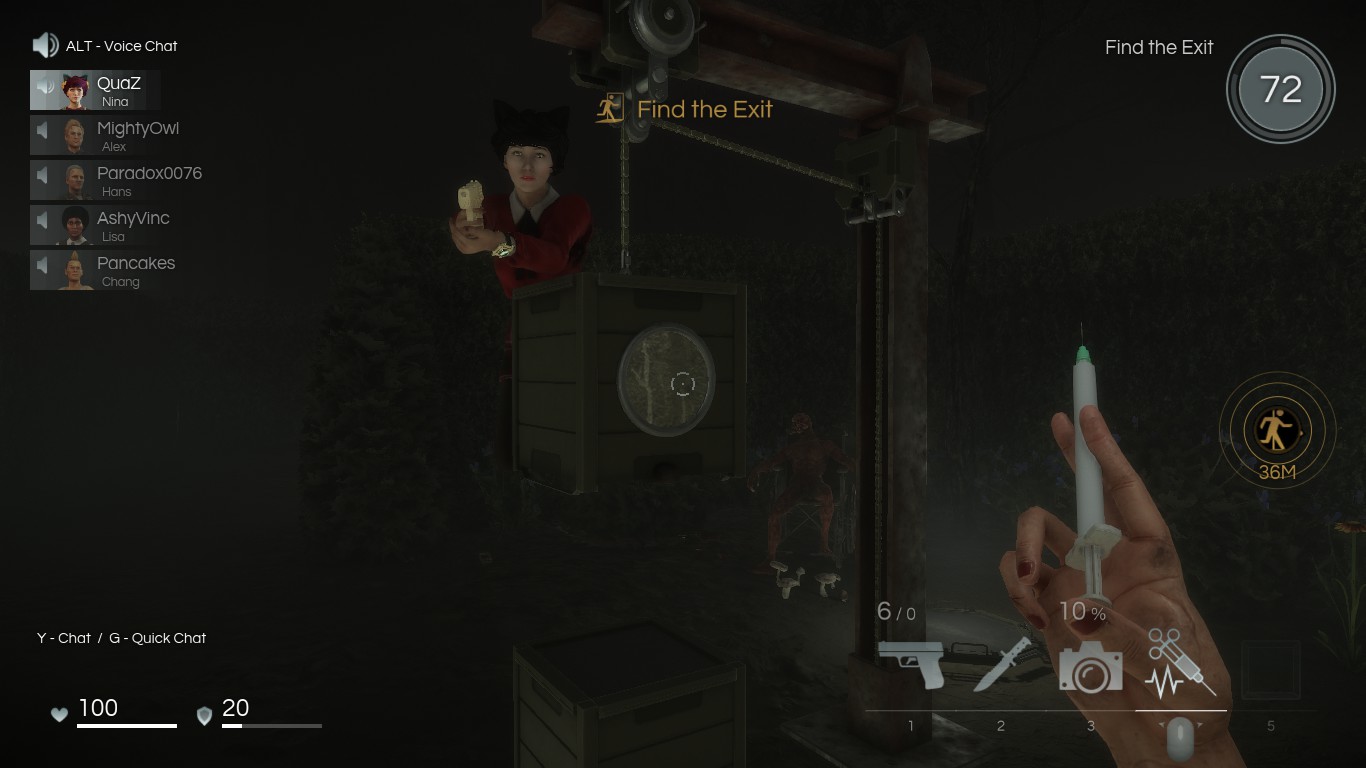