This essay introduces a methodology towards designing games that portray a very clear and tangible intent, that are elegant to play and enjoyable to develop.
Adrian Novell
Blogger
February 13, 2019

As game designers we often find ourselves having to make decisions quickly. Complex design decisions. How should we face such and such system? Are all these mechanics and features really necessary? What needs to be developed first? Do all these interesting-sounding ideas actually fit together?

When we get to a fork in the road and both options sound good, how do we choose one over the other?

Having to face these situations often, not being able to provide a concise and clever solution can (and usually does) lead to two types of consequences:

Now, there are tools that help us make choices, to stay true and not reinvent the wheel over and over. A few of those could be: common sense, an understanding of the technical and production aspects, examples of how such problems were solved during other games, and lastly the pure study of game design as an expressive and communicational medium.

However, given these tools at hand (that I’ve managed to acquire along the way through experience) I still believe there’s something missing. Some solution or way of understanding design that allows us to create solid experiences. So solid that there can be no doubt how they should be designed (what I call “auto-designed” experiences). Products with such a clear vision, such a strong pivot that decisions leave almost no room for discussion, and you can focus your creative efforts towards creating rather than arguing.

This is how I came upon a methodology I nowadays call “Core, Focus and Power”, which fills this void, can be applied to mostly any development and delivers the expected results (solid experiences and an enjoyable development)

That’s what I call this methodology, which is simple:

The Core is the central piece in our game. It’s what we want to deliver. It’s the message.

The Core could be a word, a feeling, an emotion, a mechanic, a character.

It could be a business objective, a platform (for example making use of the Switch’s capabilities).

I like to sum this up by saying that the Core is: “the design’s intent”.

Practically anything could be the Core. For example, all along this essay I’ll use a game I’ve developed as reference. It’s called Mages & Taverns, and it’s a board game. In this case the Core is something as quirky as: “generating an interaction between players”.

Other examples of Core can be:

The Core will be the cornerstone with which we’ll be designing the whole experience. It’ll become the objective, and thus the North.

When it comes to design it fulfills two functions:

What other advantages does it provide?

My game, Mages & Taverns, started as a cross between a typical game from Argentina, the Truco (a simple game, built on bluffing), with Magic: The Gathering. This turned into a simplification of Magic, with three players, where they each took upon the role of a wizard that arrives at an inn with only one last beer left, and they all decide they should play this ancient magic card game too see who gets to drink it.

That was the original design intent, but after having made a prototype and noticing how much the game forced players to interact, I decided that my game’s Core should be precisely that: generating an interaction between players.

From that modification on, I introduced a very important card: “Fire” 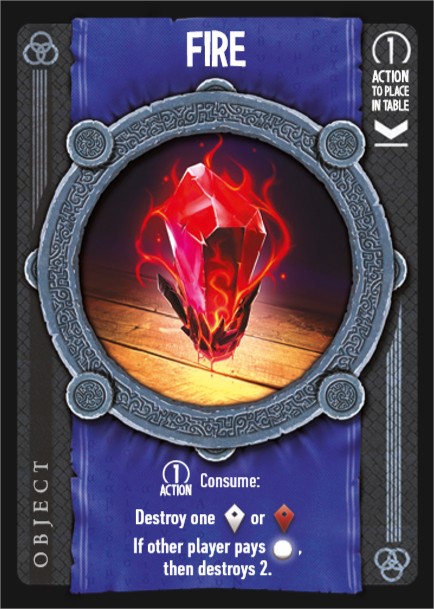 This card has a strong effect:

The point of the card is that if another player (remember this involves a minimum of three) pays a basic resource (an orb, this game’s currency) then this card becomes stronger and destroys two gems, which can become devastating.

I took this new version to a meetup at @Tembac ‘s house (a place known for hosting game development parties with characters such as Ron Gilbert, Jonathan Blow, Dino Patti, etc) where a match took place, lasting approximately thirty minutes. The first twenty minutes of it were completely silent, where no player was interacting with anyone. The experience was turning out to be a failure. Up until the last few minutes when somebody used a “Fuego”, another player paid up an orb (to give the card a power-up) and chaos ensued. The argument this move created lasted about five minutes, and it made me sigh with relief: the Core, the intent of the design, had shaped that experience and I had achieved my goal. 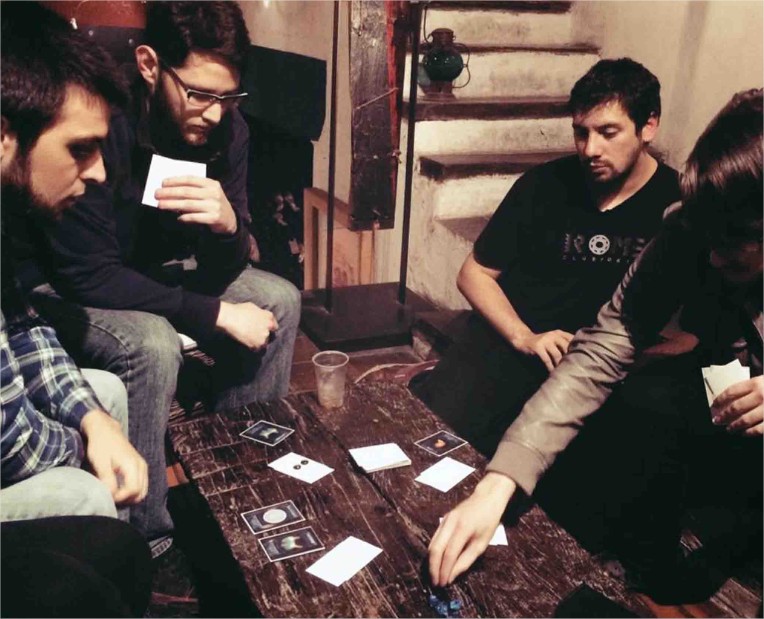 (The most quiet match of the evening, until “Fire” came up)

How new is this “Core” concept?

Some companies such as Ubisoft or EA work with a similar concept, and they call it “fantasy”. It calls upon an ambition the user assumes from the moment they interact with any communication piece of the product. And the game must make that experience come to life, fulfilling those expectations. In order to do that, all the design and development has this “fantasy” as its center. It becomes the pivot. An example of “Fantasy” could very well be Dragon Age Inquisition: “Become the Inquisitor”. With that simple premise, the user understands what their role will be, what setting to expect, etc. But that’s not only good as a marketing tagline, it has to also work as a North and a guideline of the development itself.

Other people use the concept of “design pillars”.

Defining the Core sooner or later.

I recommend defining the Core BEFORE you start designing anything else. But I also understand that there might be cases where something gets to the design table without a clear objective, and when you’ve already got something that’s alive, you have to stop, catch yourself, look at the game and understand what its Core is.

A example can be found doing a prototype for a Jam, where maybe something gets done without thinking about it too much and then, realizing that however interesting it may be it already brings up several design uncertainties, you must slow down and comprehend the game, figuring out what its Core is and designing with that in mind from that moment on.

Focusing is an exercise and a mindset that involves applying a filter that’ll only keep those elements that are aligned with our Core. Focusing is asking ourselves every time that something is about to be implemented: does this feature point towards the Core of our game?

Even if it most of this might seem obvious, what’s not is that the whole package of features and elements must have a clear intent that’s aimed towards the Core.

I named it Focus precisely because it involves placing the Core in the center of the scene. Everything in our game should highlight the Core, front and center. Achieving that is Focusing.

What can point towards the Core? Anything.

Any and every tiny piece in a game is a chance for communication. Here, as an example, is a list of a few elements that can achieve Focus, so as to understand the range I find it to cover:

During some research, I found that the world of film already holds a similar concept they call “Mise en scène”

This concept claims that the way you communicate in film isn’t just through the script or the performances, but anything that takes part of a scene will have an effect on what’s being told. Elements such as lighting, framing, the surrounding, the colors, the wardrobe, etc. They’re all working together towards conveying something in particular.

We should be able to pause a movie during any frame and appreciate this concept in action.

For example, in this frame from American Beauty, which tries to place Kevin Spacey in a position of vulnerability, we can observe:

This video explains in a very interesting fashion the concept of Mise en Scène and the detail involved in this scene from American Beauty:

A way of achieving Focus is asking if the features that we’re implementing really do point towards the Core, but it’s also a backwards exercise. Taking a moment every now and then so as to actually look at what we’re throwing in and asking once again if they’re Focused on the Core can be really important. In this video, Mark Brown explains the process other developers had to go through:

Going back to the board game example, after having found the mechanics that highlighted the Core (player interaction), I realized that perhaps not everything was aligned towards the same concept. That’s when I applied this notion of Focus, and, in order to improve the game design, I went through each of the game’s cards and rules, modifying a few of them, taking a few out and eventually adding a couple more into the deck.

Some of the measures I took when applying Focus were: