When designing a level you're able to freely compose your virtual environment with any objects you want. A level designers' work can be compared to that of a painter. Now let's see the level as the art gallery and the level vistas as paintings.
Mateusz Piaskiewicz
Blogger
August 17, 2014

Originally posted at: LEVEL-DESIGN.org Knowledge Base.
Article by:
Mateusz Piaskiewicz

When designing a level you're able to freely compose your virtual environment with any objects you want. This distinguishes level designers from the landscape photographers. You don't have to adopt to existing elements of nature or architecture. You can affect the scene dramatically. A level designers' work can be compared to that of a painter. Now let's see the level as the art gallery and the level vistas as paintings. It means that a player can traverse from one composition to another.

When you should care about composition? Well, I would have to say that you have to do it all the time but that’s simply not possible. It's very time consuming and sometimes there's no need to build mind blowing compositions in the middle of nowhere. The good news is that building pretty compositions is very simple and will easily become your second nature. A lot of designers I've met can make awesome levels but they don’t know how or when to apply these compositions. In this article I'll present you with my way of planning and implementing beautiful environments.

When and where you can apply composition rules:

There's a thin line between composing everything you can and imitate nature or natural mess. You can create composition of leaves that wind blew by the wall but the result might be simply overdone and unnatural. Composition is used to arrange space into appealing picture. Leaves are only background, there's no need to compose that unless that's an important pile of leaves that should get player's attention. Nature is creating beautiful compositions, let's simulate the power of nature instead of faking it.

Composition is an arrangement of scene elements. Scenes with applied rules of composition presents a harmonic idea that is easy to understand and isn't confusing to the observer. Harmonic composition smoothly guides the player's eye through the image's elements just as we planned. Harmony has a huge impact on the understanding of an image. In order to achieve a harmonic scene you need to set down the components of your scene and emphasize some of its elements by using color, lighting, proportions, direction and position. In other words, you can show the important part of the screen and hide things that are only background.

The opposite to composition is chaos. On chaotic images it's hard to determinate which element acts as dominant. In this situation the player can focus attention on relating parts of the scene. In this article the player and observer interchangeably.

Composition can be divided into three main sets of layers: Foreground, Center of Interest and Background. Additionally you can include the staffage layer in your composition.

Layers that are the closest to the observer. This set of layers acts as a prelude and creates a frame for the composition's dominant. It's commonly overlooked in games. Foreground is used to focus the player's attention on the most important layers - Center of Interest. Remember that composition elements from the foreground have to have a logical connection with the rest of the composition. Brightening foreground objects can separate this layer from other layers which creates an effect of scene isolation. Darkening objects on the foreground gives the feeling of space because the contrast is enhanced in regard to the rest of the layers. Often, only a silhouettes of objects are visible and you don't have to worry about that, on this layer you shouldn't show details and colors.

A layer or layers on which the composition's dominant is placed. Dominant is the focal point of the composition, it can't merge with the rest of the scene's objects but it still has to be consistent with those objects, it should be brighter and set in a advantageous position to stand out from other elements. Thanks to the dominant it's possible to quickly name the theme of a scene, for example: "Winter scene with the ruins of a medieval guard tower in the mountains" where medieval ruins are the dominant and mountains are the background. You can use dominants to tell a story of the scene and build the unique identification of the scene. You need to plan your composition so that the dominant will be the first object which the observer will notice. Make sure that there are no obstacles that heavily cover the dominant but don't worry about the objects that overlap other layers. Center of interest can hold more than one dominant. The other dominant in the composition is called the counterpoint. As an example it could be a scene "Fountain on the market square with a wreck of a tank". Fountain is the first dominant but the tank wreck also asks for attention. When the observer will get to know all the dominants he'll start to look for a details on the center of interest and the background layers.

Layers that are closing the composition. Mostly background layers which main contents are the horizon and sky. Background layers are marked with calm and moody color scheme and less detailed objects. This helps keep the observer's eye on the dominant. The purpose of these layers is to bring out the dominant's silhouette, impress with the scale of the scene, create depth and eliminate the impression of scene isolation. An effect that can emphasize the depth is aerial perspective (also known as tonal or atmospheric perspective). Avoid using strong colors, sharp lines and lots of detail.

Optional layer with living elements, for instance human or animal figures. Mostly used as a scene diversion, a scale and proportions reference or the eye guiding element. Pay attention to the figure's pose or face direction. It is a big eye catcher and it can compete with the dominants. You can use it to guide the observer's eye by showing the figure's line of sight. The observer will notice the figure's face and will check what he's looking at. 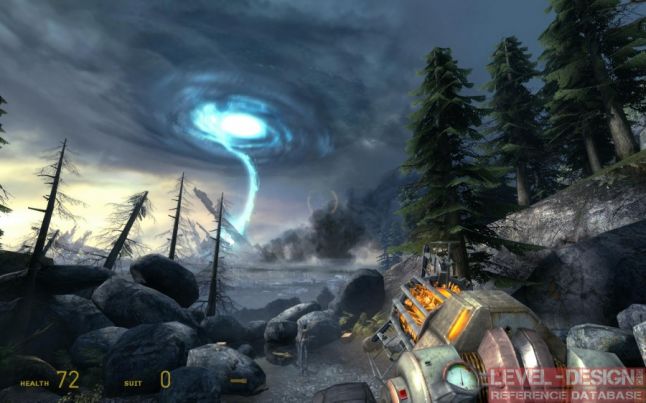 Alyx watching what is happening on the horizon. She helps determinate the proportions of the scene and her line of sight draws attention to the event on a horizon. - Half-Life 2: Episode 2

This angle defines how player will be able to observe the dominant. You can change the sight angle to achieve bigger impact by modifying the dominant's size, height or placement.

Angle in which the observer sees the composition layers. By changing this angle you're able to adjust the perspective and depth of the scene.