Coming up with ideas for a Game Jam game

Coming up with ideas for a game jam when you are on a tight schedule can be hard. Here are some of the tips to help you.
Stas Korotaev
Blogger
December 02, 2015

Coming up with ideas when you are on a tight schedule can be hard. But the thing is that you need to be able to complete it during the game jam and still have time for polish.  In a lot of cases, it must fit the theme as well.

A lot of game jams have a rule that your game should fit into a theme that is revealed when the event starts. For example theme can look like this: "You only get one" or "You are the Monster".

A theme adds constraints, but it also allows you to be more creative and not wonders of overwhelmed with all the possibilities your game could be.

You can apply additional constraints on yourself if you would like or if the theme is too vague. So, for example, you are making a "shoot them up" game. You can apply a constraint that the player can't shoot. But what's the gameplay then? Well, maybe you reflect the bullets, but only in a specific arc in front of you and that ability has a delay. There are a lot of options.

Also here is a great tip from Chevy Ray: 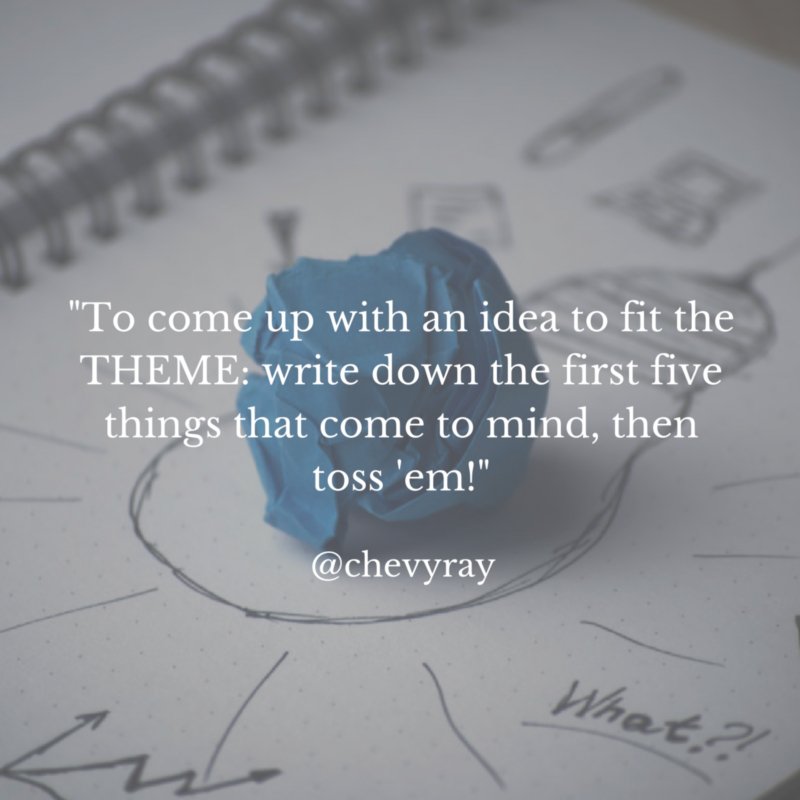 The idea is that the first five ideas are probably too obvious, and a lot of other participants will implement them anyway. You should look for something else.

To get better at coming up with ideas during game jams,  you can do brainstorming sessions. So just pick a random theme (for example from a past Ludum Dare) and go at it.

It is very important during this warm-up sessions to get to the point where you are excited about going with the idea that you just came up with AND it that will be possible to make it in the timeframe you have.

As another option - for the Ludum Dare you will know 10 themes (one of which will become the selected theme) in advance. So you can come up with ideas for each one. What we like to do sometimes is go to the lunch together and come up with like 2-4 game ideas in that time. One game per theme. Quite a few of them can be used towards multiple themes out of those ten. So you wouldn't need 10 separate game ideas.

Also don't forget that you can reuse the results of these brainstorming sessions either for the game jam or maybe use some cool parts of it for you full games.

Note that if you start to expand those ideas further over the course of a couple of weeks before the jam - they will probably become out of scope for the weekend game jam.

Before choosing the genre in which you haven't made a game before I recommend you check out this list. It shows how difficult it is for certain genres of games to make a Minimum Viable Product (MVP). From simplest to most difficult:

Also, bear in mind that 3d games normally take up approximately 4x more time than 2d ones. Some of the games are only possible in 3d that's why I mention it here.

Don't think about integrating multiplayer into your ideas either. Unless you were already very familiar with it, because it will take up a ton of time you could've spent on making your game better.

Before you start implementing

After you have the rough idea, I would also recommend you mock up the interface before doing anything else. This may help you identify problems before you even started implementing anything. Making mockups of your future interface may also lead to some ideas that can potentially shift the design in a more exciting direction. And because you haven't coded or drawn anything at this point yet it will be a lot easier to switch.

Think about your gameplay loop - this may help you identify problems in your design. But this is a big topic for a separate article so I will not cover it here.

Will your game have enough interesting choices?

Try to play the game in your head. This may help you understand that your game lacks something. For example that the player will have a lot of downtime, and you didn't want that.