CityVille is like a canvas upon which you can draw a city. SimCity is more like a city.

Now many of you might be saying "Gerald, give it a rest. We know you don't like facebook games. Nobody cares. We don't want to hear your incessant whining and blathering on about Zynga. Zynga is just a bunch of normal people trying to make some money."

However, as a scientific person, I feel the need every once in a while, throughout my life, to re-evaluate my currently held position on a subject - whether that be politics, human nature, economics or in this MUCH more important case - video games.

"There are huge differences between CityVille and SimCity.

CityVille is for a more casual audience to play with friends. You buy buildings that produce coins or farms to produce goods. Those goods supply shops, which are also bought with coins, that give you more coins and experience. SimCity is a city simulation game. You manage Government buildings and city zoning with a sort of hands off approach what buildings go where. One of the few similarities is the main goal, which is to create a thriving successful metropolis.

•Promotes friends to complete some buildings/goals

•City is persistent, continues after you logoff

•Population density based on building type 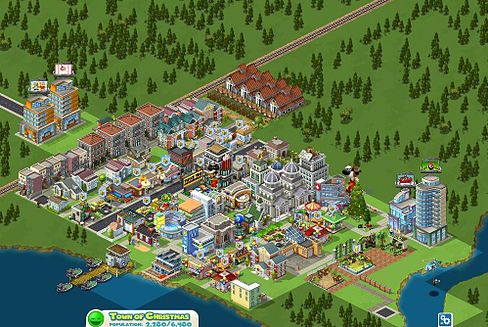 •Population based on area conditions"

I would like to add one more difference between these two games.

1) CityVille has no possiblity of failure. In SimCity, if you manage your city poorly enough you can drive it into an irrecoverable economic and social downfall.

So what is the main difference between these two games? CityVille focuses on "clicking" and "timed clicks". SimCity focuses on thinking and planning.

The really interesting thing is that I grew up playing SimCity - are kids nowadays going to grow up playing CityVille? What affect will that have on their understanding of how a city functions? I mean SimCity is not a completely accurate simulation of a city but it is at least a simple simulation(as opposed to CityVille, which is NOT a simulation and doesn't try to be one). SimCity can help simplify many of the complex things about a city and put it on a child's level or a young person's level. SimCity has won a large variety of educational awards and commendations from a wide variety of educational institutions. CityVille as of right now has not won anything.

Divisive debates are interesting. In the movie Constantine there is a character named Papa Midnite. He serves as a neutral party in the dealings between demons and angels. Constantine goes to him to try to convince him to choose a side in the conflict.

You reader, are like Papa Midnite. And I am like Constantine, begging you to reconsider your apathy for the crap that comes pooping out of Zynga.

I think that anyone who thinks that CityVille is educational is either stupid or creativly deprived. If they think it is fun then they are either 4 years old or just plain boring. Please, if you have kids, introduce them to SimCity. If they can't at least enjoy good video games then they are better off just not playing games at all. Put them in an extra sport in that case.