Caught in a web: the sticky progression design of Marvel's Spider-Man

A breakdown of three smart design decisions Insomniac Games took that made Marvel's Spider-Man sticky and motivated its players to go beyond just completing the game and drove a substantial number of players to go even further and 100% it
Feras Musmar
Blogger
July 19, 2021

One of my most vivid memories, before the days of covid-19, was going to the cinema with friends. I remember going in with a big group and the cinema being fully booked. Seats were filled with people excited to watch the latest blockbuster that everyone had been talking about. As I’m watching, I realize that the movie is great. It's everything that I expected and more. My friends seem to be really enjoying it as well and getting visibly excited at several points. Before the movie is half done, my friends start leaving one by one, I ask them if they don’t like the movie and most of them say “It’s great, I’ll just finish it later”. As the movie goes on, more and more people have left and by the end there’s just me and very few others who stayed until the end. Like every other time I went to the cinema, by the end, the majority of people had already left the movie they all seemed to be enjoying so much.

This made up, silly story obviously never really happened. As you may have realised, it’s an analogy about games. While the majority of people in the cinema tend to watch a good movie all the way to the end, this is rarely the case with great games. In fact, if you look at the open world genre of games on PSN, it seems the majority of titles have less than 40% completion rate. And these are award winning games and franchises that are considered heavy hitters in the industry, such as Assassin’s Creed Origins, Horizon Zero Dawn, Red Dead Redemption 2 and Far Cry 5 to name a few.

When it comes to completion, the game that is topping the list is Marvel’s Spider-Man, made by Californian developer Insomniac Games, which has a completion rate of 50.8%(1) and one of the highest platinum trophy earn rates(2). As a game designer focused on player’s engagement, I couldn’t help but wonder what has this game done so well that player’s couldn’t put it down and say “I’ll finish this later”. 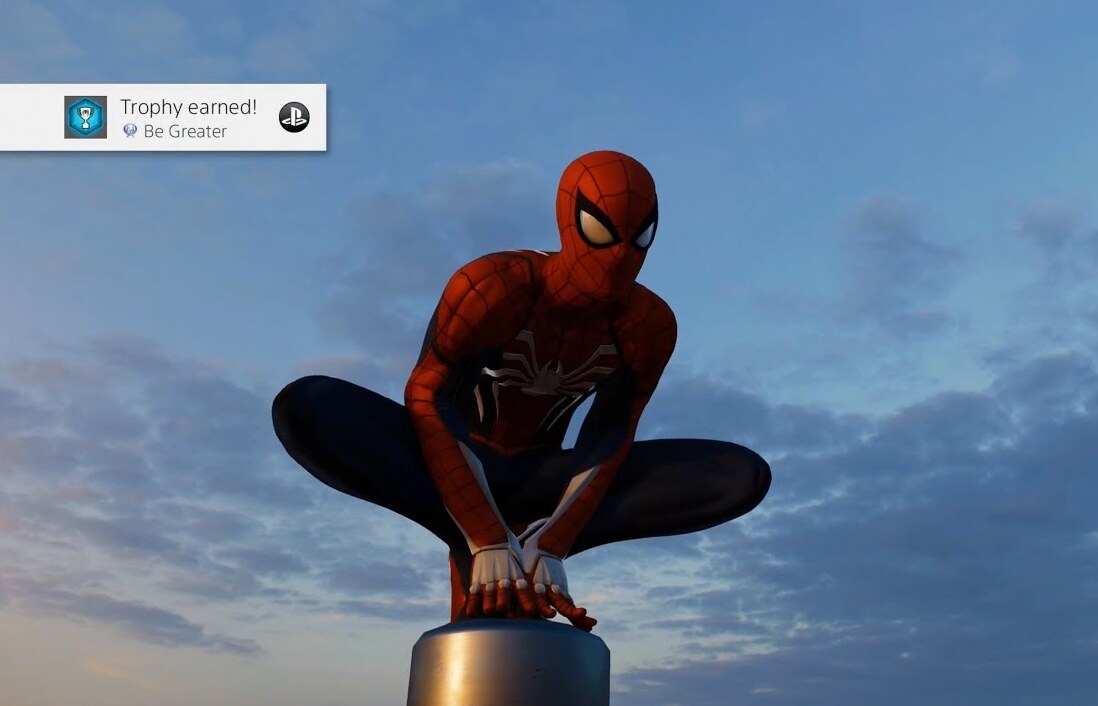 While there could be a lot of factors that contributed to the stats mentioned above - such as number of hours to complete, population size and difficulty to obtain platinum - I’d like to highlight three of the smart design decisions that motivated players to go beyond just completing the game, they drove a substantial number of players to go even further and 100% it.

Mixing in Side Missions within the Main Storyline

One technique Insomniac Games employ to encourage completion of side missions is introducing moments when there simply is no active, main mission. At several points during the main storyline, the narrative comes to an abrupt halt and the player is told to kill some time until a specific event happens or a specific character is ready to meet the player to continue the main storyline.

This technique teaches the player that side missions are actually part of the main game experience. At the same time, it prevents the players from having that insidious feeling of guilt that can so often invade player’s thoughts when they find themselves distracted by side missions. 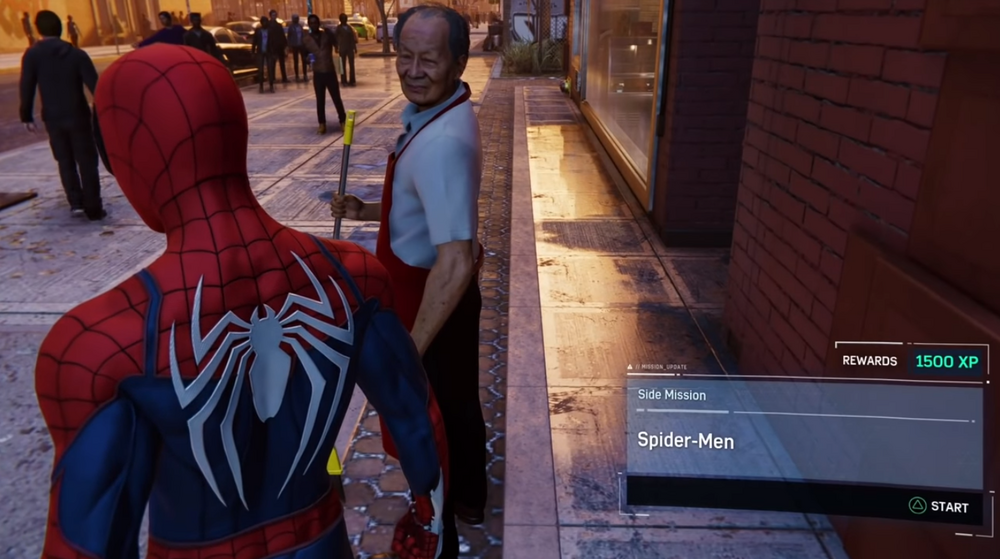 One concern that players often express is that, if they put too much effort into the side missions, they won’t have enough energy to complete the main game. When you teach the player that side missions are part of the game, you reduce the risk of them dropping out with side missions left untouched.

Another factor that can result in players ignoring side missions, is when they’re designed in a way that breaks the immersion in the main story or doesn’t fit the theme of the game. An example from Spider-Man that could easily have fit this mold is catching pigeons. It would be easy for the player to feel that if the world is coming to an end soon, maybe I shouldn’t be spending my time helping a guy catch his pigeons (an actual side mission in this game). Spider-Man alleviates this potential dissonance by explicitly telling the player: listen, you’ve got nothing better to do for now, might as well chase those pigeons and be the Friendly Neighbourhood Spider-Man.

A Headstart on Every Goal

Spider-Man allows the player to not only roam around guilt free, but makes the roaming experience extremely fun due to how smooth, swinging around between skyscrapers is and the different ways the players can use the environment. The result of this is that players find themselves naturally chasing the different side distractions while they’re completing the main story or trying out the new gear and skills they have just unlocked by ranking up at the end of a main mission. 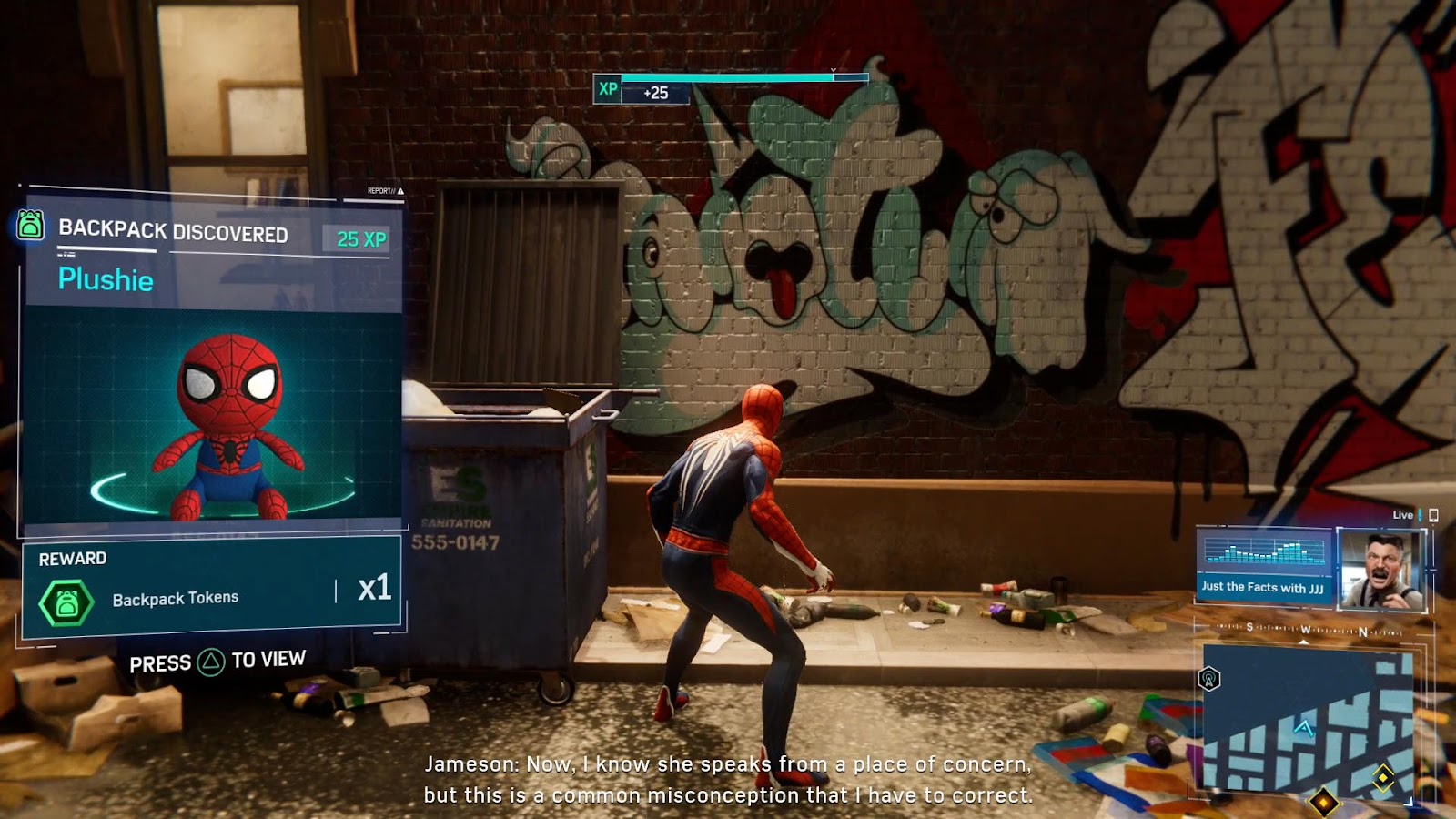 Consequently, by the time the player reaches a point where they start self goal-setting and decide to finish 100% of a specific side mission type (for example: find all the green backpacks in the world), chances are they would naturally have completed maybe 30% of the side mission during their previous sessions. This helps drive completion because now, when the player decides to pursue a goal they’re not starting from nothing, they’ve already completed a considerable chunk of it. The effect of this makes the 100% final goal feel much more achievable.

It can also help the player choose what to chase next, by easily looking at which of the available goals is closest to completion. I’ll discuss in more detail in the next section how completion percentages are displayed in Spider-Man, as clear signifiers of progression are vital to giving the player that ‘I’m almost there’ feeling.

The world map, in Spider-Man, is the landing page of the menus in the game and is also the core navigation tool. Insomniac’s decision to embed the player’s progression on the map, combined with a few very smart decisions on how the side missions and collectables are displayed on the map, is potentially one of the key reasons it’s so hard to stop playing Spider-Man. 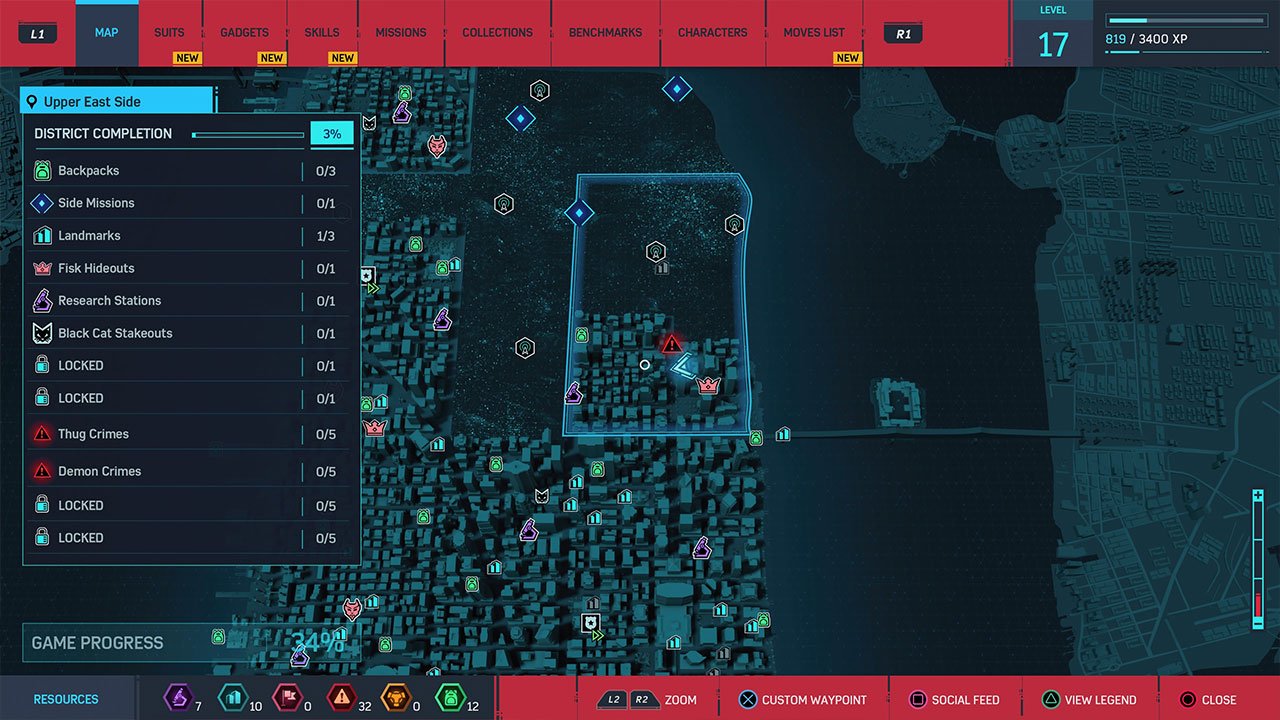 The first thing to note is the overall Game Progress percentage that is presented on the map. As a game designer, whenever you want the player to set their own goals it is important to provide them with tools to measure their progress towards that goal. Displaying the overall progress in plain sight achieves that elegantly.

What’s interesting is I don’t believe a lot of players started the game thinking that they’d want to 100% percent it. I suspect that, as players progressed in the game, the thought started occurring to them as a consequence of seeing this percentage every time they looked at the map.

I think it is really important to mention that, getting 100% on the main progress bar is not the point where the player is rewarded the platinum trophy. The designers at Insomniac Games seem to have decided that trophy hunters will chase trophies regardless of whether progress is highly visible or not. Presenting the progress bar on the map seems to be designed specifically for players who wouldn’t usually chase 100% completion. This decision is most probably what informed the decision to choose what tracks towards this percentage progressing and what does not - for example completing a challenge side mission progresses the bar, even if the player does not achieve the highest rating on some of the challenge missions -. Note that also all the side missions and collectables are displayed on the map for you to chase, this will be important in the next section.

Another cool decision Insomniac made on the design of the map,was segmenting it into districts, and then within those districts, showing the different side missions, collectibles and a secondondary, district progression bar. This breaks the major milestone (the overall progression bar) into several smaller milestones (completion of districts), so the player now has smaller milestones to chase to reach the major milestone - small check points towards the end of the race. 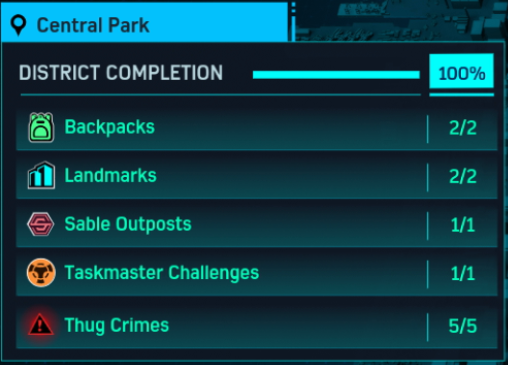 Zooming in further on the district tracker

Showing the different collectibles on the map and then detailing them per district gives the player the choice to select their own next milestone. The player can now start clearing the world either district by district, or by pursuing a specific type of side missions until they’re completed, or a combination of both.

If the player ends up going the specific side missions route, what is likely to happen is that while they’re completing tasks per mission/collectible type, they’ll end up in a district where they have already completed the majority of missions and will decide to complete that district to a 100% while they’re there. That's the power of showing a measure of the current player’s progress in small chunks. It helps the player shift focus during the play session while measuring the total impact they can have on the overall major goal.

The end result of these decisions is that Marvel’s Spider-Man is a game you want to experience right to the end. It never pushes the player toward completion, but the design decisions result in that just making sense. Yes, Spider-Man should be out there fighting crime, and that aligns well with the main story, but also Spider-Man is a friendly neighborhood hero. This is the perfect narrative fit to encourage  the player to complete helpful side missions. Through it’s dialogue, Spider-Man also made sure that players wouldn’t feel bad while they’re completing side quests. It did this not only through unlocking different upgrades, suits and xp that  make it easier to complete the main storyline and fight crime, but also by ensuring that through completing both  the main and side missions, the player would become the ultimate version of Spider-Man.