Carmine, a minor character, but one that I truly cared for. WARNING: Contains SPOILERS about the Gears of War Series
Ben Lewis-Evans
Blogger
October 14, 2011

WARNING: Contains SPOILERS about the Gears of War Series 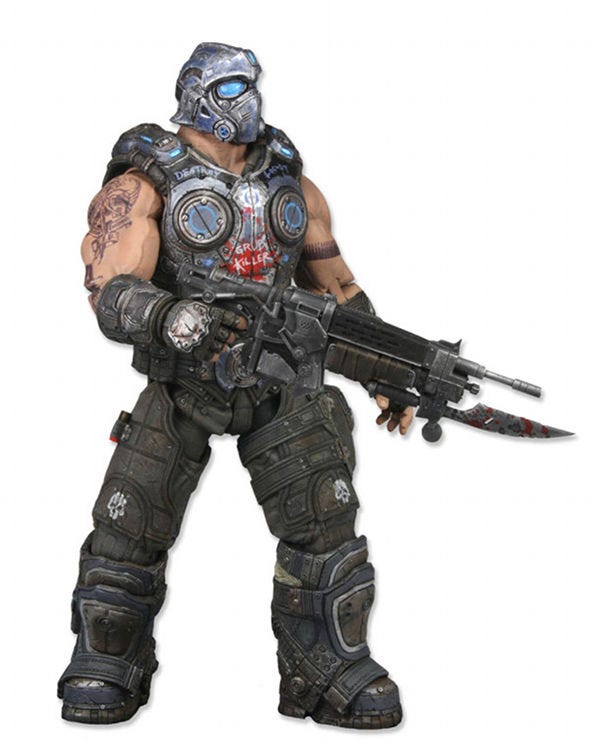 A few weeks back I played and finished Gears of War 3. Now, I know plenty has already been said about this Game, but I just wanted to share my thoughts about one aspect in particular. That being the Carmine character, or should I say the Carmine characters. In that Carmine is actually the family name of a series of minor characters that feature in the Gears of War series – primarily by dying (see I told it it had Spoilers).

I have always liked the Carmine character, even back in the first game where his role was to mostly serve as the explanation for why all the main characters weren’t wearing helmets (and perhaps to take a dig at other famous Helmeted Space Marines). He had character, even in this early game. He was the fall guy for sure, the underdog, but I think at least to me that made him more relatable than the gruff Fenix or Dom. I played the campaign a few times with different friends and I always regretted seeing Carmine go so early in the game.

Then in the second game the next Carmine brother was even more of a character, he reacted to the world around him, again in a way that seemed to connect more with me than anything that happened to the other characters (sorry Dom and Maria). Sure he was acted in perhaps cowardly ways at times, but he came though, he was relatable. He was still helmed, but in the fine tradition of other helmeted faceless protagonists perhaps this made easier for me to relate. I wanted Carmine to live this time, I cheered when he was heroic, and while I didn’t feel sadness when he inevitably fell I was a little pissed. To be honest though I expected him to die… it was just a matter of when.

Then came Gears 3 – leading up to the game there was an event on XBL where you could buy a “Save Carmine” or “Carmine must die” t-shirt for your Avatar. The money would go to child’s play and whichever t-shirt was purchased the most would determine Carmine’s fate in the third game. Well, I had never brought Avatar clothing, and had never intended to, but here was a cause I could get behind. I brought my “Save Carmine” t-shirt immediately, and my Avatar still currently sports it (as you can see).

So by the time Gears 3 came around I knew Carmine’s fate would be uncertain (although it would be cool to see those numbers now in terms of t-shirt sales, anyone got them?). This had an interesting effect in terms of my nerves when playing the game. Whenever he was on screen I was nervous. Was it coming? Would he survive? I just didn’t know. Unfortunately (in my opinion) while he does feature in earlier levels he quickly disappears from the game leaving only the familiar faces of Delta Squad. Oh sure, they were slightly more Human this time around. But I still didn’t really care about them (sorry Fenix). But the nervousness that I felt when Carmine was on screen was not something I had expected from a Gears game, I cared about Carmine. As such when the reveal of his fate came at last I expressed my joy/sadiness (I will leave you to play to find out which) loudly.

Why did I care? Well, of course I have already touched on this. In my opinion Carmine was more human, he has weaknesses and reacted to the world around him. Unlike Fenix who found out that the Locust were genetically engineered by the humans and hardly batted an eye. Sure that is in Fenix's character (and it is endearing in a "oh you big lug" kind of way), and I appreciate that. But it didn’t help me connect with him. As mentioned above perhaps the helmet also helped me relate, although I must admit (as my avatar also shows) I also think helmet look cool (when playing Space Marine recently I was often thinking, “Boy…. I wish I had a helmet”). Or perhaps it was the uncertainty of his fate, or the personal investment I had made in it by handing over my money for a virtual t-shirt. I also play as Carmine in multiplayer, but that is something I started after he made his way into my heart. Most likely it was a combination of these things.

None of this is revolutionary of course. The above are all traditional reasons why you would care about a character, but still I wanted to write this and just say; Carmine, I was there for you buddy.