Card Games - A Simple Design is a Good Design

New designers often create needlessly complicated and clunky designs, but the truth is that simple designs are good designs. I'll outline the nature of this problem and offer some tips for new designers who struggle with complexity.
Nicholas Kinstler
Blogger
June 22, 2018

In high school I knew someone that made Mario levels on their calculator. They showed me some of their work, and it was filled with pixel-perfect jumps and frame-perfect techniques. They took great pride in their creation – specifically in its difficulty and complexity. I nodded and smiled as they showed it to me, but all I could think was “this just isn’t fun!”

One of the most common mistakes that I see new game designers make is a tendency to produce designs that are complex or require a deep knowledge of the game’s rule set. The result is almost always the same: designs that are bloated, unfocused, and difficult to grok. This happens with all genres, but as a card designer I’ll be focusing on card design. In this article I’ll explain why I think this happens and offer some advice for those who are just starting out that may help them create designs that are more focused and elegant.

It’s difficult and generally unwise to try and figure out why someone else thinks the way they do, but for the purposes of this article I’ll do just that. If I had to guess why new designers so often produce clunky designs, I’d say that it’s usually one of two things.

Those who play games and those who make games have two entirely different perspectives. Designers understand the work that goes into the process and have the skills to actually create games, whereas players only ever experience games as a finished product. Many of us in game design start off as players, but for some, the transition from thinking like a player to thinking like a designer is a difficult one. The result can be a designer who creates highly complex systems because they want to be challenged as a player.

Design as a Game

I think the other major cause of this problem is that some new designers treat game design itself like a game. They create intricate designs as a way to challenge and entertain themselves, but the result is a precarious Rube Goldberg machine that few people other than themselves can actually enjoy because it wasn't meant to be enjoyed to begin with.

It’s worth pointing out that the root problem in both of these instances is the same: the designer forgot that they are designing a game for an audience, not for themselves.

Before I start offering advice, it’s probably a good idea to take a quick break to talk about why the problems outlined above are actually problems!

Go Easy on the New Guys

New players don’t know how your game works yet, so they need a nice on-ramp into your game in the form of simple, easy to comprehend cards. Too much complexity delivered too quickly is overwhelming, and it can push these new players away. With first impressions being as important as they are, new players that are scared off initially due to high complexity may never come back.

But why should you appeal to new players? After all, it’s the veterans that are consistently supporting you and your game, right? Well, over the course of 3 years, Hearthstone went from ~10 million active users in 2014 to ~70 million in 2017. That kind of growth takes more than just a good product and advertising – it requires a welcoming, newbie-friendly environment. Remember, everyone is new at one point.

There’s a limit on the amount of information we can stuff into our heads at once. Complex designs use up a lot of this limited memory, so the more memory we dedicate to complex designs, the less we have available when we’re trying to figure out game rules or paths of play. In other words, complex cards eat up a resource that players should be dedicating to actually playing the game. Complex cards are also just flat-out hard to remember, especially if they have a ton of abilities and effects. The more time a player spends struggling to remember how a card works, the less time they spend playing the game.

Now we finally get to the part that you probably came here to see – what can you do to improve your design skills? I’ve got a few tips listed below, but keep in mind that this is a matter of adjusting how you approach and think about design. It’s a skill, and like all skills it can only be acquired with practice and patience.

Do One Thing and Do It Well

When creating a card, one can be motivated to jam in a couple of effects and abilities that make the card more flexible, or “interesting.” However, the most effective designs are usually ones that do one thing or focus on one mechanic. Here’s a generic Magic-/Hearthstone-style creature card to illustrate my point:

Whenever you play a spell card, The Magimaster gets +1/+1 until end of turn.

Once per turn, you may return a spell card from your discard pile to your hand.

It gets bigger when you play spell cards and it lets you play spell cards more often so that it can get even bigger. It’s also got higher attack than defense to show that it’s meant to be aggressive with those self-buffs. It’s one card that does one thing. Now here’s a slightly more complex creature:

Discard two cards: The Necromaster gets +1/+1.

6 Mana: Return a creature card from your discard pile to the battlefield.

Now, at first it looks like this card does a number of things. It discards, it buffs itself, and it returns dead creatures to your hand. However, it’s really built around a single strategy: get stuff into your discard pile, and then get stuff out of it and onto the battlefield. You get a good discard engine and a decently chunky creature in the process, but discard pile interaction is the main strategy.

You may think that cards that do one thing are too narrow or niche, but that’s not always the case. Both of the examples I gave above could fit into multiple decks and strategies, even though they both have one main mechanical focus.

If you’re looking to cut down on mechanic bloat, try to pick one role, mechanic, or strategy for a card and build the design exclusively around that one thing.

It’s easy to think of simple designs as boring, and the natural reaction to that is to create complicated designs. After all, if simple is boring than complicated must be exciting, right? It may be, but only sometimes and only to some people. Oftentimes, the reality is that complex cards are either too unfocused to appeal to anyone, too complex to actually work, or too difficult for players to understand. This time I’ll use a real card as my example. Meet the humble Summit Prowler:

Summit Prowler is a card from the Khans of Tarkir expansion of Magic: the Gathering. In this expansion there was a mechanic called Ferocious, which provided cards with additional or stronger effects if you controlled at least one creature with power 4 or greater. You’ll note that Summit Prowler has 4 power, so having it on the battlefield turns on your Ferocious cards. Smooth and simple, just the way I like it. Summit Prowler is known as a “vanilla” card in the Magic world – that is, a card with no additional abilities or effects. To some people, that just isn’t enough. You might imagine that a new designer would try to “improve” upon this design by adding in some sort of conditional effect, creating something like this: 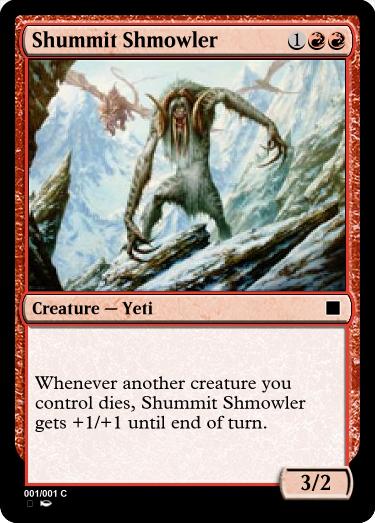 By adding this conditional ability I’ve given the card additional depth, but I’ve also made it a worse card. It may cost less to play, but the conditional nature of the ability means that it spends more of its time in a weaker state. It also makes it a lot harder for me to power-up my Ferocious cards by demanding that I meet certain conditions at the right time. While it may seem like this design leads to more interesting and challenging gameplay, the real result is that players will pursue the path of least resistance and either not use Shummit Shmowler or not use it in conjunction with the Ferocious mechanic. In a roundabout way, I’ve actually made the game less interesting by making a card more complex.

If you find yourself always trying to tack on additional effects to your card designs, challenge yourself by creating “vanilla” creatures or single-effect spells that still work with certain strategies or gameplay philosophies. It’s almost like landscape photography – anyone can take a nice picture of an impressive vista, but can you make a single leaf interesting? Practicing this can build discipline and give you a greater appreciation for simple effects. 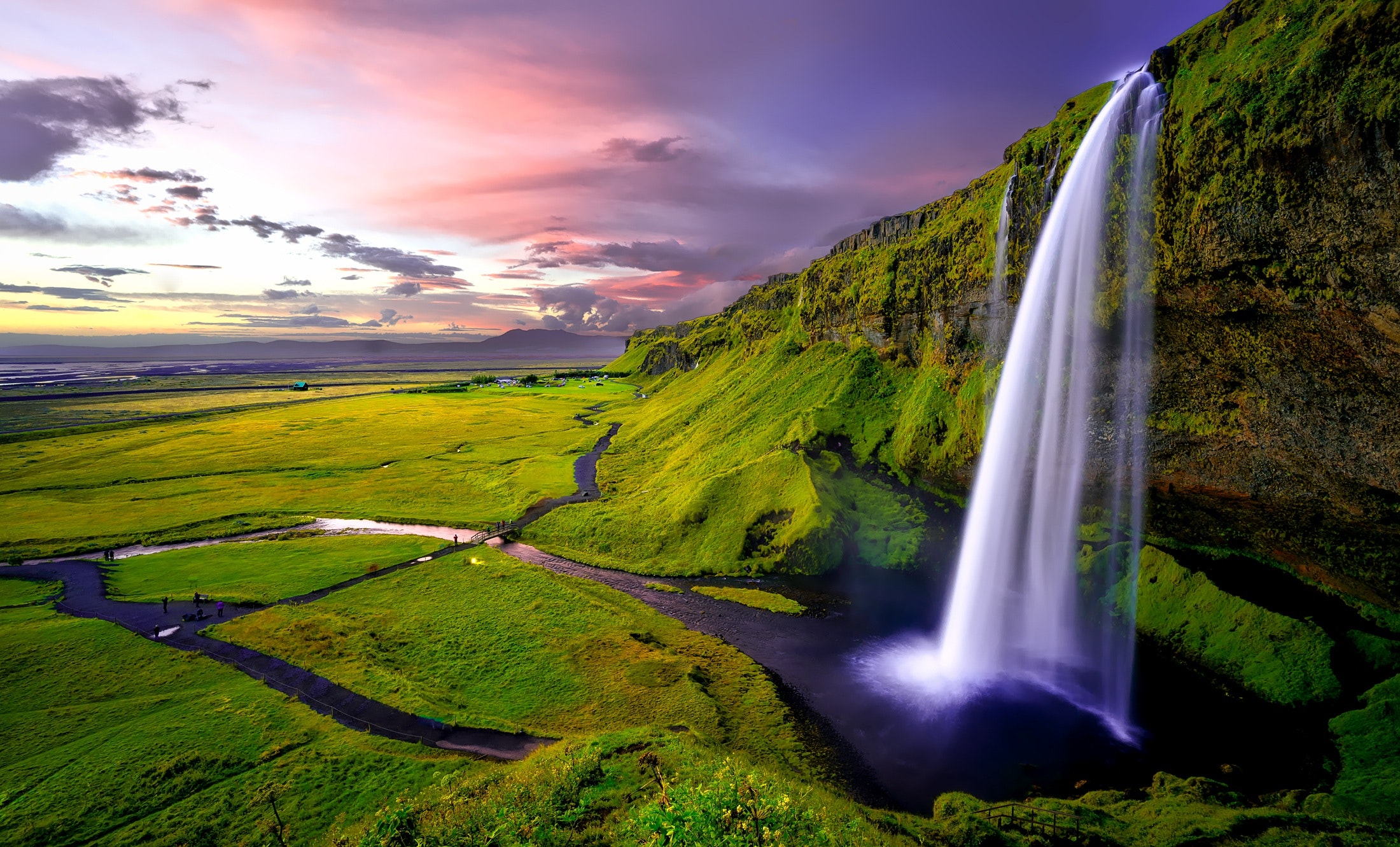 With card games in particular, it is possible to spread complexity across multiple cards that are meant to work in conjunction with each other. In this scenario, rather than making any single card overly complex, a new designer might try to construct an intricate tapestry of relatively simple cards that come together to form a complex whole. Though any given card may be within acceptable complexity boundaries, this too is a flawed approach.

Firstly, the designer is falsely assuming that players will read the cards the same way they do and understand that they are meant to be used together in a specific way. Secondly, the designer may make certain cards very powerful to encourage the use of a strategy or combo, only to find that they’ve made those cards so powerful that players are exploiting them in ways that the designer didn't intend because they tunnel-visioned on their masterpiece. Finally, the cards may be so niche and so custom-built for the one strategy that was intended for them that they either don’t ever get used, or players are forced to create a very specific deck, thus removing a lot of the fun and challenging decision making that goes into the deck building process.

When designing a set of cards, don’t try too hard to force a very specific set of interactions. Instead, decide on a couple of somewhat open-ended strategies (spell cards matter, reviving dead creatures, health gain) and create cards that interact with those strategies in various ways. You can create a few more specific interactions here and there, but your goal should be to give players the tools to create their own interesting decks, rather than giving them the blueprints for a specific set of decks.

I hope that this article has been helpful. There’s more that I could talk about, but for now I’ll leave it at these three tips. So, when creating card designs, try to remember that simpler often is better. In fact, some of the most iconic cards are the ones with the most elegant effects!