Taking the suguestions of from some of my comments recieved on my blog about things to add to my Bud the Spud game.
Michael Knight
Blogger
March 21, 2012 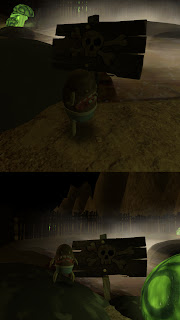 I've had some awesome ideas presented to me both here on Gamasutra and on my Bud the Spud game development blog about what to add to my game. Some of the things like the danger signs were already planned but there were so many other things I had not considered like addng fireflies to give players a hint as to where to go. Such an idea was awesome for the crossing of the deadly toxic mud bogs areas. Like Bog two for instance, the natural assumption would be to try jumping to the 2nd brocken dock on the otherside of the bog, which can be done although it is a difficult jump, the safer jump is actually to the edge of the mud bog to the right of the dock. I placed some fireflies just above the glowing green fungus just to give a hint as Jonathan had suguested in a comment to my blog here on Gamasutra. Such great ideas and I apreciate every one of them. It awesome sugguestions like that, that will make this game great!