Breath of the Wild's Montessori Method

Ever wondered what makes Breath of the Wild so special? This article examines how the game takes a relatively unusual approach to instructing players about its mechanics.
Justin Reeve
Blogger
July 23, 2018

The most common approach to learning in schools today is known as behaviorism. The behaviorist approach to education can be observed in just about any learning environment: the majority of teachers apply its principles without even knowing. Since we experience it almost every single time that we pick up a controller, the basic structure of behaviorism should be familiar by now to almost any gamer. Ever taken damage when you fall from a ledge? That’s behaviorism. Gained a few experience points for turning in a quest? That’s it, too. This approach to learning works by setting up a feedback loop of punishment and reward for different types of conduct. But it’s not the only educational method out there. 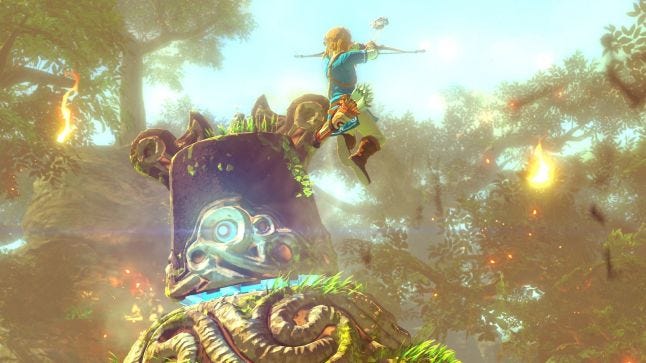 Get hit and you'll be down a few hearts

While behaviorism is focused on influencing your actions through operant conditioning, the Montessori method consists of teaching people how to reapply abstract knowledge. This approach works by using your senses as information transmitters. The knowledge which a person acquires about the world through listening closely, looking things over, and feeling stuff out gets processed, stored, and reapplied to new situations by their intellect. The Montessori method for example is well known for using building blocks of different sizes, shapes, and colors to help children develop an understanding of spatial relationships. Frank Lloyd Wright famously attributed his architectural skill to this activity. The basic aim is to assemble a toolbox of abstract principles which can be used to provide solutions to new problems whenever they’re encountered. 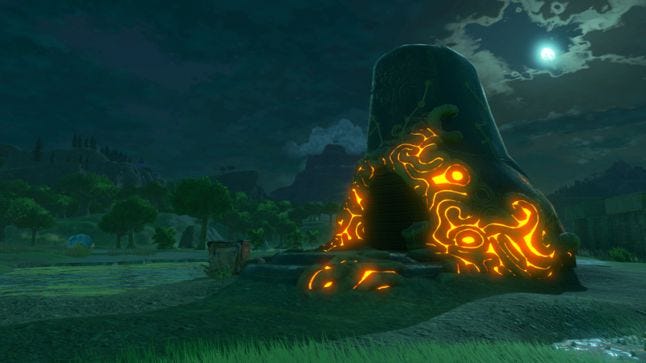 Breath of the Wild certainly has a few behaviorist features, but the game leans heavily on the Montessori method for most of its systems. Fall down a hill or get hit by a Bokoblin and you’ll definitely be down a few hearts. But what happens when you enter a shrine? Step off that elevator and the game’s developer, Nintendo, confronts you with a very different kind of learning experience. 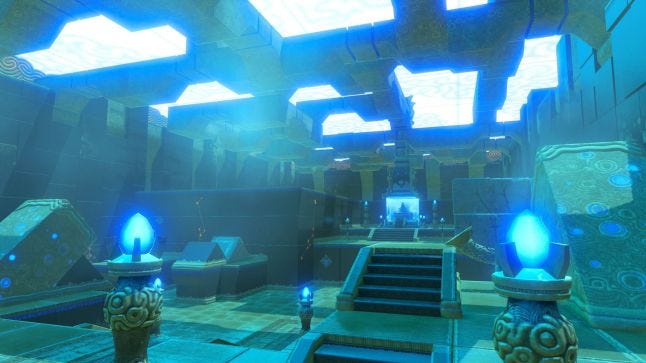 Magnesis, Remote Bomb, Stasis, and Cryonis are used to solve many shrine quests

The shrine quests are a perfect example of how deeply the Montessori method influenced Breath of the Wild’s design. Each one of these involve the reapplication of abstract knowledge about the game world to a new problem. Some of them appeal to common knowledge about stuff like physics, but the shrine quests rely for the most part on Link’s four main Sheikah Slate runes: Magnesis, Remote Bomb, Stasis, and Cryonis. (The Camera and Master Cycle Zero powers never get used). These allow you to move metal objects, destroy crumbling walls, freeze time, and walk on water. The shrine quests make you reach into this toolbox of special powers, pick the appropriate rune, and figure out how to apply it to a puzzle. The game unlocks a door when you find the solution. These puzzles tend to get increasingly complicated over time, but the tools used to solve them never change. 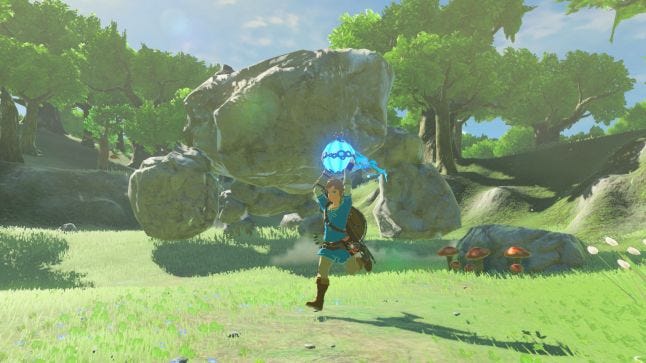 The shrines on the Great Plateau — Ja Baij, Keh Numut, Oman Au, and Owa Daim — require players to use the Sheikah Slate runes. Each quest in this area was carefully designed to make you think about how Link’s powers can be used to solve different types of puzzle. Ja Baij has a bunch of crumbling walls. Keh Numut is full of waist-high water. Oman Au features metal blocks, doors, and platforms. Owa Daim has both rolling and stationary boulders. Inviting players to experiment with different possibilities through harmless trial and error, these all typify the Montessori approach to learning. Players even get their lost hearts back at the end. 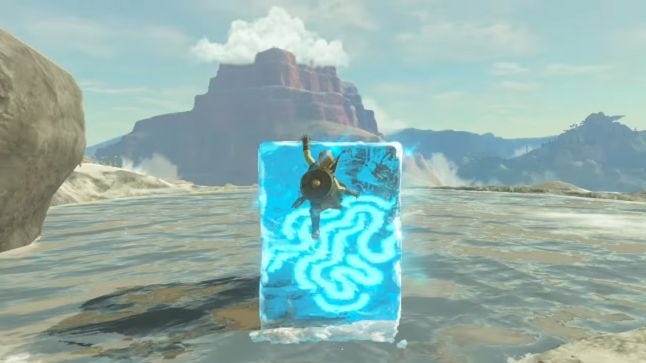 The game also employs Montessori learning methods in its boss battles. There are Overworld Bosses and Dungeon Bosses, but they all behave in the same basic way: they come at you with a consistent set of attacks. Players are trained to recognize this early on through chance encounters with Breath of the Wild’s relatively harmless Overworld Bosses. (They exist in the game’s open world, so you can always run away if death seems inevitable). These are mostly various types of Hinox and Talus. Their straightforward smashing attacks are performed rhythmically, so you can figure out their patterns of behavior pretty fast. This allows you to come up with a set of strategies for self-defense. The best ones involve taking advantage of another feature characterizing Breath of the Wild’s bosses: the weak spot. Shoot an arrow into the eye of a Hinox and you’ll deal it extra damage. 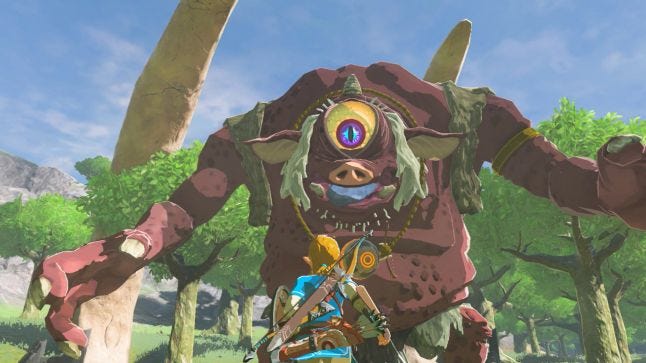 Overworld Bosses come at you with simple, rhythmic attacks

Learning the basic features of a boss battle is crucial for eliminating the game’s more challenging Dungeon Bosses. Most of these are incarnations of Calamity Ganon. Extremely powerful and heavily armored, they can only be defeated by mastering their attack patterns. (Hitting them repeatedly in a weak spot often works, too). Their attacks come in several different varieties: quick/ slow, ranged/ melee, and concentrated/ area of effect. Some can be devastating if you’re unlucky enough to get hit, but even powerful enemies like a Dungeon Boss are hooped once you figure them out. True to the Montessori method, defeating them requires you to exploit what you already know about the game’s bosses: attack patterns and weak spots. 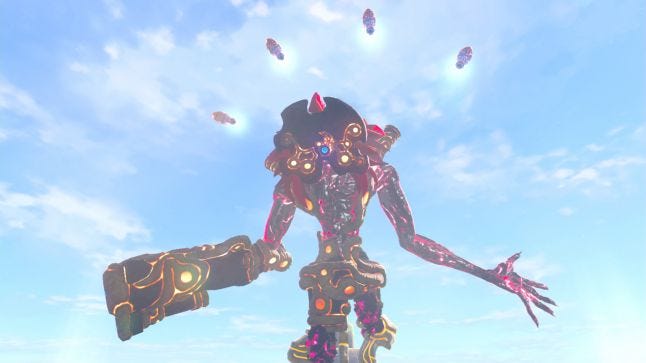 Dungeon Bosses have more complicated attacks, but they're still rhythmic

Wander through Hyrule for a while and you’ll find that some of its creatures are associated with an element. Fire, Frost, and Electric Chuchus for example can be found in various parts of the game world. Experimenting with different weapons will reveal an interesting phenomenon: they’re vulnerable to certain elements. Fire Chuchus are sensitive to ice, Frost Chuchus are sensitive to flame, and so on. But if Chuchus are dealt more damage from certain weapon types, shouldn’t other types of enemy? The Montessori method relies on exactly this type of reasoning. The goal is to help you internalize an abstract principle which can be reapplied to new situations. Breath of the Wild takes the same approach: there’s even a shrine completely encased in ice. The only way to get inside is to figure out that Frost Chuchus aren’t the only thing susceptible to flame. 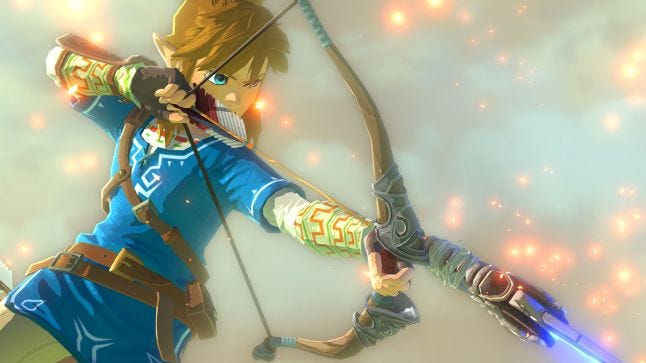 Since enemies in Breath of the Wild have elemental strengths and weaknesses, shouldn’t Link? He certainly has them, but they’re mostly weaknesses. Parts of the game world are hazardous to his survival, so he’ll take damage without the proper equipment. Keep him outside in the cold without a warm jacket and he’ll start to shiver. Run him around the desert in heavy armor and he’ll start to sweat. This is just one more example of how Breath of the Wild challenges players to observe a phenomenon, realize its implications, and reapply the principle to new situations. Goron City for example is near a volcano, so you’ll need some protection from the heat. Rito Village is on a mountaintop, so you’ll want some extra layers. But what about Gerudo Town? Well, it’s warm during the day and freezing at night, so you’ll have to bring a change of clothes. 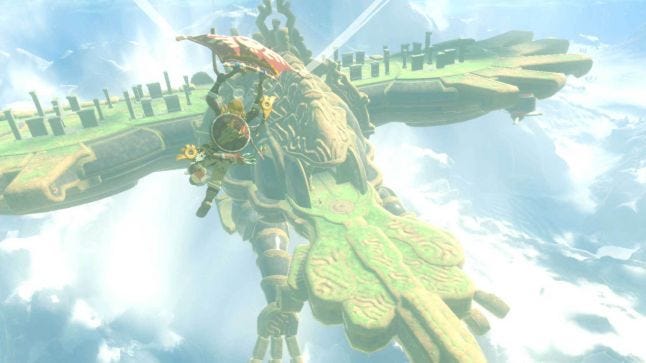 The Montessori approach to learning is famous for letting children play around with blocks. The idea is to let them figure out how to produce new spatial configurations through trial and error. Breath of the Wild functions in exactly the same way. The game encourages you to experiment with its different systems before giving you opportunities to apply what you’ve learned about its world. Nintendo presents you with a toolbox of abstract principles to mess around with in surprising, amusing, and occasionally even disappointing ways. Anybody who’s ever made themselves a plate of Dubious Food will know just how deeply the Montessori method pervades Breath of the Wild’s mechanics.

This article was reproduced from "Breath of the Wild's Montessori Method," posted to SlowRun on March 3, 2018.