This is a comprehensive analysis of Supercell's latest title, Clash Royale. I examine the product from a holistic perspective and breakdown core innovative elements to learn from.
Sheldon Laframboise
Blogger
February 23, 2016

You may or may not be aware, but Supercell has a frequent soft launch, test, and kill approach when it comes to developing games.  They are pretty selective with most games either not making soft launch or by being quietly removed from the app store without much of a word.  Recently however, a new Clash spin-off has been gaining massive momentum.

While Clash Royale is very early in its life span, it is looking to be a promising product. The game has reached in the top 5 grossing in Canada (its initial soft launch territory) and has overwhelmingly positive predictive numbers from 3rd party services.  It seems like a great time to research and analyze what looks to be Supercell’s next big block busting title.

So without wasting any more of your time, let’s chat Clash Royale.

With the cost of user acquisition rising significantly, obtaining a known brand for your mobile game is becoming more and more crucial to gaining early success. Lucky for Supercell, they own a small title you might have heard of, Clash of Clans.

Clash of Clans, is an absolute mega-nuclear hit with well over 300 million installs and revenues reaching over 2.5 billion worldwide (yes, you read that right…).   It has however been reaching a slow critical mass over the last year with install numbers trending on a subtle decline.  It makes sense for Supercell to start funneling its literal millions of players onto a new product or more ideally, both.

Enter Clash Royale, a game designed using the mighty power of the Clash of Clans brand.  The visuals and themes are the same. Mechanics are familiar, and the game has been designed with a strikingly similar demographic in mind. 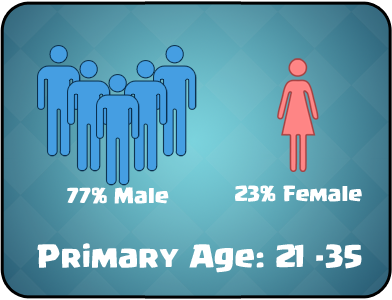 At even the simplest glance it becomes obvious Supercell is aiming to recoup and retain their player base from Clash Royale’s big brother.   The similarities don’t stop here however, a lot of the same design fundamentals have also been followed.

At its core, Clash Royale gameplay is elegantly simple; it is a CCG meets real-time tower defense.  The gameplay and systems design takes a real MVP, or more importantly Minimum Awesome Product approach.  This design fundamental makes the creation, implementation, and iteration rapid and easily achievable with a relatively small development team.  The gameplay itself is easy to learn but impossible to master; and strikes that midcore sweet-spot that Supercell has mastered over the years. 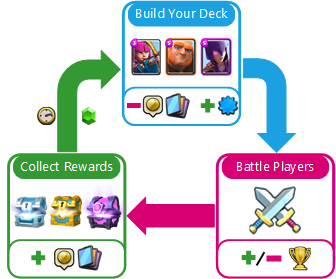 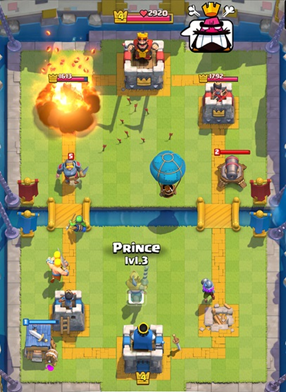 *Note: There are some details I missed like Elixir regenerates faster in a round, but you get the idea of the gameplay.

The design at its core borrows from a lot of successful genres. It offers unlimited gameplay experiences and meta for the player.  No two games will ever be the same and the player will always be experimenting with different deck combinations, card synergies and elixir curves.  As more cards are released, the meta gets even more varied.  This assumes Supercell balances the game so there is never a “perfect” game breaking strategy.

Tons of Progress and Goals

King Levels are a persistent representation of player progress.  They are more or less, the player’s account level.  Leveling up provides extra health and damage to all of the player’s starting towers in the battle field.

King Levels are earned through the collection of experience.

Experience is earned by three inputs (which I’ll discuss in more detail later in this article):

Cards are the meat of the game and the meta-game. Each Clash Royale card is randomly earned through battle, daily rewards and through store purchases. Like so many other card collecting games, they are broken down by rarity.

Each card has its own sort of progression curve.  As players collect duplicate cards, they can combine them using gold currency to create a levelled up version of the original.   Cards are a simple enough concept, what the real genius is how they are broken apart by Trophy Arena tiers.

Trophies are a fluctuating source of accomplishment.  They can be won or lost, all depending on how successful a player is in combat.  Trophies are used to gate access to new arenas, again adding more tiered aspirational goals for the player to achieve. 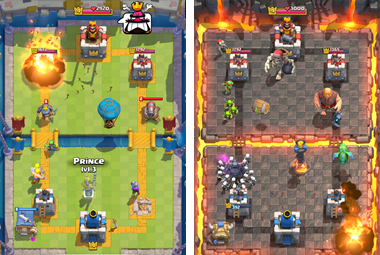 Each new arena has a new visual look and theme to keep things fresh.

Most importantly though each new arena unlocks a new pool of cards to be discovered, collected and leveled.  Each newly discovered card starts at level 0, again renewing a concentric loop of unlocks and leveling goals.

By creating a tiered unlock system, Supercell ensures there is always something new to collect and level-up.  In fact the design premise works a lot like the town hall upgrades tiers from Clash of Clans. Some game mechanics are even locked based on Arena Tier to give the player more goals early on.  For instance a player cannot join a clan without reaching level 3 and even the store is locked until the player has reached level 1.

It may seem simple, but locking these staple features gives clear aspirational goals for the player to progress further and thusly will have a positive effect on retention.

Achievements in Clash Royale follow the tried and true approach of Supercell’s other hits like Hayday and Clash of Clans.

Everyone remembers that feeling opening their first treasure chest in a game.  That feeling: “Oh I can’t wait to get that chest and see what sweet loot is inside!?”  Clash Royale obviously isn’t the first CCG to do this, but their presentation and pacing is fantastic.

Tons of treasure chests are rewarded early on in the new player experience and each day the player has a few chests to open right away.  There are multiple types of treasure chests, each with different content and different retention strategies behind it.  They are as follows:

Wooden Chests are given out as rewards for completing steps of the tutorial.  The introduction of these chests do a few things:

Free Chests are literal rewards on timers.  This is the evolution of “daily rewards” systems seen in every other free to play titles.

Crown Chests fundamentally function the same way as the Free Chests however there are a few slight differences.  Crown Chests require the player to earn 10 Crowns in battles and are on a 24 hour timer.

Each of these chests is earned for achieving victory over another player.  Unlike other chests however, these are stored into the player’s inventory and require time to open.  These tasty, tasty rewards are where players will experience their first pinch moments.

Unlike other games, Game of War for example, which floods the player with instant gratification rewards; Clash Royale turns reward collection on its head.  They make you wait, and waiting sucks.  It builds a really powerful sense of anticipation (and retention).

Not only that, but like I mentioned above, each chest takes a slot in the player’s inventory.  Once that inventory is full, the player will not earn anymore chests. 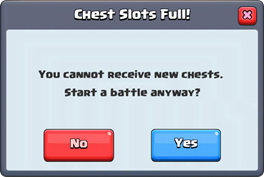 This creates a soft progression blocker.  Now I say soft progression blocker because the player can still battle as much as they want.  Gameplay and session length is not restricted at all. They can earn trophies and progress in Arena tiers.  Players will however experience a rubber banding effect.  As they progress, competition gets higher level and tougher until they are impossible to beat and the player will be forced to lose Trophies.

Without levelling cards you cannot level up, without being able to level up you will not be able to compete against tougher opponents. This means you cannot push that progression rubber band back.

The inventory chests is a simple and elegant system which does the following:

The Clash Royale store has the standard fare of purchasable goods.  It has currency packs which have increased value proposition the bigger the bundle. Treasure chest purchases which skip an open timer if bought.  They even have the hard currency to soft currency (gems to coins) transaction.  This is all pretty standard free to play canon.

There is one thing however that I find particularly innovative on the store.  That is: Cycling Card Sales. 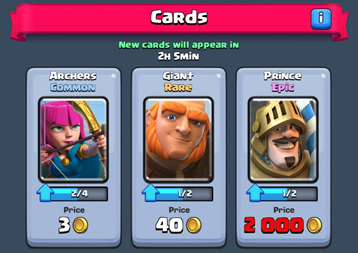 On a set timer, the store will update with 3 new cards the player can purchase for soft currency.  It’s simple and works well with the games other systems.  It has the main following impacts:

The Clan System is a mostly direct parallel of the Clash of Clans social feature. It’s a social light system with players earning trophies by just engaging in the core loop. Trophies contribute to the overall clan score and help the group climb the clan leaderboards.

The UI and UX is vastly improved however and it appears almost like a text message feature on a smartphone.  Something everyone is familiar with. 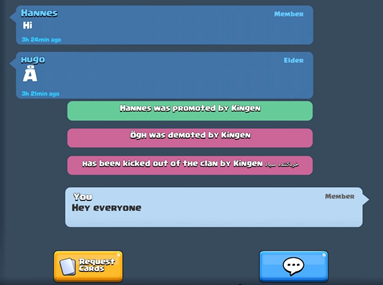 Instead of donating consumable troops ala Clash of Clans, players can donate cards to clan mates.  Because cards are permanent upgrades the donation rules are more strict than Clash of Clans. 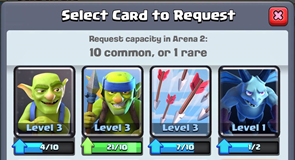 Players can request cards be donated to them every 8 hours.  Players cannot request Epic Cards as donation.  Only 1 type of card can be requested at a time.

The donation ruleset accomplishes the following:

Unlike Clash of Clans, aspirational goals are a little more difficult to establish since you can’t literally just view another player’s high level base. TV Royale is a nice little feature that lets players view matches between higher level players, see their units and strategies.

TV Royale establishes that long term goal of: “I want that army and to be that awesome!” which would otherwise be missing from the product.

From throwing down your cards to simple UI interactions, the user exper