Whenever I personally witness a fight blocking will only go so far. Dodging and countering—using your opponent’s momentum against them—seem more effective and is generally more entertaining.
Joshua Sterns
Blogger
April 08, 2010

[Whenever I personally witness a fight blocking will only go so far. Dodging and countering—using your opponent’s momentum against them—seem more effective and is generally more entertaining.]

Hack n’ slash and fighters have utilized blocking mechanics since the beginning of time—err video games. Typically the character will put his/her forearm or weapon in a defense posture. Incoming damage will be minimized or avoided all together.

Good games add more defensive abilities to keep things interesting. This usually involves a counter and/or dodge feature. Enemies will also be given moves that are unblockable. These mechanics are used to avoid one of the worst features in hack n’ slash and fighters. I would like to dub this idea Mortal Kombat Syndrome (MKS).

In the first Mortal Kombat a player could hold down the block button while their enemy rapidly punched. 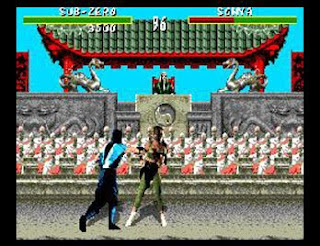 The animation would show the defender in the same animation until they either let go or their opponent ceased their assault.

These are all great games, and they have plenty of other features to overcome their MKS. Yet there are still moments where you put up your defensive animation and watch attacks bounce off.

Recently I have completed Bayonetta. This action packed game has no block button. Dodging is the basic defensive mechanic. This makes combat fluid and for lack of a better term more realistic. Whenever I personally witness a fight blocking will only go so far.

Dodging and countering—using your opponent’s momentum against them—seem more effective and is generally more entertaining. Batman: Arkham Asylum is another game that ditches the block button. The Dark Knight can stun, dodge, or counter incoming blows. The lack of MKS blocking is one reason the combat feels fresh and original. I hope developers look at these two successful tittles and adopt their defensive mechanics.

I have yet to find a fighter that utilizes the no blocking mentality. I also rarely play anything besides Blazblue and Street Fighter IV. These two popular titles may have a character that specializes in counters, but there is no universal move.

Dead or Alive 3 is the only game I’ve played where each character has a basic counter, but there is also blocking. I think it would be interesting to have a fighter where blocking wasn’t an option. A counter mechanic would be the basic defensive ability. I can imagine skilled players countering each other for minutes at a time before someone finally slips up and gets beaten.

MKS is not a series issue for many games. God of War III has very few moments where you can simply hold down the block button. If you only hold down block in Ninja Gaiden II you will be destroyed. In Blazblue or Street Fighter blocking too much will bring on the throws. The characters in Castle Crashers are holding shields so their defensive prowess makes sense.

Yet in all of these a clever eye will notice MKS. The main character will stay put in that same animation to block everything from blades to bullets. I hope more games ditch the stiff blocking pose and follow the examples of Batman: AA and Bayonetta. To end on a cliché…sometimes less is more.