This is an excerpt from '21 Unexpected Games to Love For The Atari VCS', available in the current game eBook Storybundle. E.T. gets a lot of crap, but it is possible to enjoy, and it's arguably better than Warshaw's previous hit Raiders Of The Lost Ark.
John Harris
Contributor
April 23, 2018

[This is an excerpt from '21 Unexpected Games to Love For The Atari VCS', available in the current game eBook Storybundle, which covers a number of classic VCS games that, untethered from nostalgia, may still be of interest to a player who didn't grow up with the system. E.T. is the subject of so much hyperbole that it's hard to see clearly. While frustrating in places (when getting out wells), could it be that it's not as bad as people say?]

Created by Howard Scott Warshaw, with graphics by Jerome Domurat. Based on the movie. Published by Atari in 1982.

In a sentence: Another adventure game from Howard Scott Warshaw, while also frustrating, once you're used to how to tackle its wells E.T. is a much simpler, more accessible, much more replayable game than the rather overloaded Raiders of the Lost Ark. 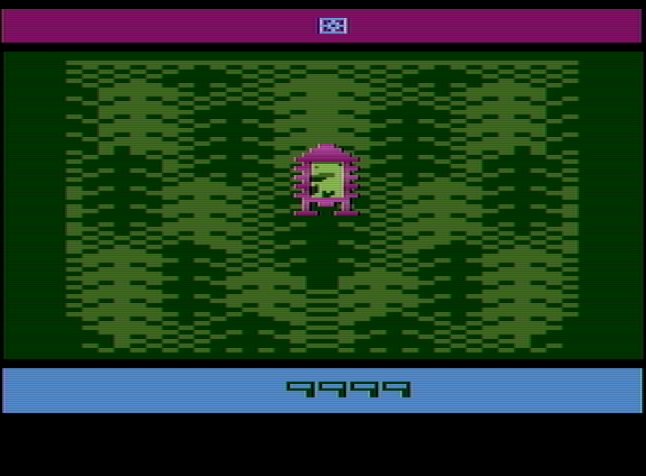 It's amazing how things become common knowledge, often incorrectly. A person hears something that is both memorable and likely, to them, to be true, so they pass it along. When one of these people writes for a popular blog or appears on a popular YouTube channel, and these factoids can spread quickly.

There are two facts in question concerning the Atari VCS game E.T.: The Extra Terrestrial. The first, that Atari was left with so much unsold product that they bulldozed them. This one is true, although it wasn't just E.T. but a variety of product. The other is that E.T. caused the Great Game Crash of 1983. This is certainly not true. One factor was likely more the prevailing attitude of Atari that they could always spend a little and rake in great profits, as well as that of a plethora of third-party companies making bad games. But E.T. itself, while not flawless, is arguably a better game than its predecessor by the same developer, Raiders of the Lost Ark: it's a lot more obvious how to play it, it doesn't require two joysticks, it's a bit less dependent on its manual, and once you know how to win the game it retains more of its interest.

There's positive things about the game as well. The game is entirely non-violent. There are no weapons, for use by you or your opponents. There was no need for Steven Spielberg to digitally change handguns into walkie-talkies here, for there aren't any guns at all. Your two human antagonists, the Scientist (I often call him the Doctor, it's what he looks like) and the FBI Agent, have the power to harass and delay you, but not destroy. 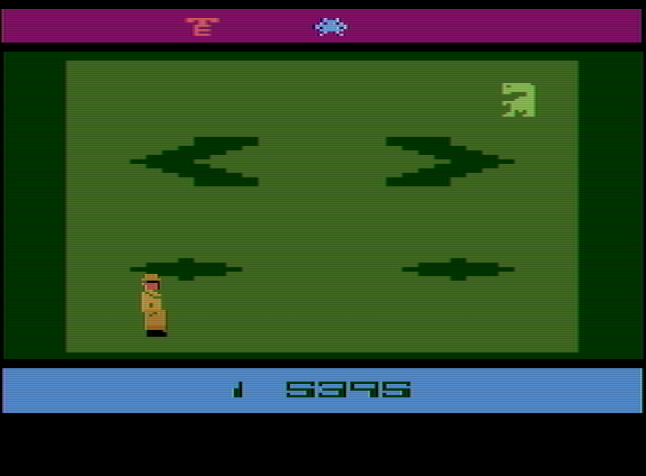 E.T., like their interstellar comrades ToeJam & Earl, is trapped on Earth, and they'd very much like to go home. The Earth in E.T. is but six screens in size, connected to each other somewhat like the sides of a cube. They need to find the three parts of a "space telephone," unhelpfully hidden in various wells scattered around Earth's pockmarked landscape, find the right place in the game world to make a call from--and make it without any humans around, because E.T. hates eavesdroppers--then be in the landing zone on Earth at the right moment, also without any humans around. That last part will prove to be your undoing lots of times.

One of Earth's six screens is the forest, where E.T. both lands and is rescued from. Another is "Washington D.C.," where the humans live. The four others are well-filled wilderness, where you can find phone parts (in wells), energy-replenishing candy dots of some forgotten trademarked brand, and also power zones. These zones are the key to success in E.T., an interesting way both to mix up each play of the game and also give E.T. various abilities without having to resort to Raiders of the Lost Ark's second joystick.

As E.T. travels the surface of Earth, a symbol will often appear at the top of the screen. This indicates what kind of power zone E.T. is currently in. Some are more common than others, and there are some places that aren't in any power zone. When the icon indicates what function E.T. wishes to perform, press the joystick button while standing still to activate it. It's an early form of the context-sensitive control gimmick that many games would later use. The power zones are randomly distributed every round, and a good memory is needed to keep track of important yet rare zones.

They're all described in the manual, but a few are particularly important. The Question Mark zones, of which there are one on each well screen, when activated, will reveal one of the wells on-screen that contains a phone part, if any do. Once thus narrowed-down, E.T. must dive into the well to retrieve it.

Those wells. Most people who loathe E.T., they do it because of the wells. They're maddeningly easy to fall into when you don't want to, and some of the wells are near the edge of the screen, so if E.T. just crosses into that screen at the wrong place they'll plunge in. When they hit the ground they'll lose a large chunk of energy from the impact. It's not well-known (heh) that it's possible, with good timing, to halt E.T.'s fall by pressing the button on their way down, and, levitating, float the rest of the way. The timing is tricky, but it's a good skill to learn, and will save you hundreds of energy points.

When E.T. has found a phone piece, whether they float down or land thud on the bottom, they can then collect it and then use the button to levitate back out. A word needs to be said about this process. Once E.T. is levitating up and out of the pit, they're not safe yet. Once out of the pit, E.T. is still levitating. Care must be taken here, or else wherever the hapless alien stops levitating, which is the precise moment they're no longer in contact with the well, they'll then immediately fall right back in again! What to do is, while still levitating on the surface, E.T. can move in all directions. The safest way to escape the well is usually by going down, if possible. Sometimes left and right work too. The problem is that E.T. will plunge back in if any part of their body ends up overlapping the well upon landing. If you have excessive trouble with this (you're likely to!), see the Links section for information on a hacked version with much less frustrating well behavior.

Now that a new phone piece is in their crinkly hands, that's one task down. Three such pieces much be found, randomly scattered around the many wells of Earth, in order to return home. Then E.T. must find the Call Home zone and activate it --without any unfriendly humans listening in-- then find the Landing Site zone in the Forest --again, without nosy intruders around-- to return home and win the game. E.T. can then continue the adventure if they want, re-scrambling the world and going another round.

Confounding this process are those two large and annoying humans that are constantly chasing E.T. The Doctor grabs them and drops them off at his home building in Washington D.C. This isn't really that bad, and can actually be taken advantage of for energy-free travel. The FBI Agent, however, is hateful. He'll steal one of E.T.'s hard-won phone pieces and toss it into a random well! That's another search for the right well and another plummet and possible crash to survive. 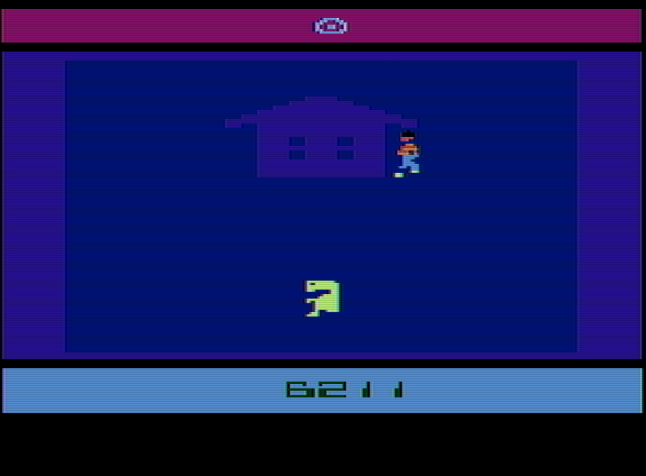 One fact that works in E.T.'s favor is, weirdly, only one human can be on-screen at once. The locations of the humans are not faked in this game, but are each either considered to be in one of the game's six screens or at "home" in their building at any given time. If one tries to enter a screen where another human currently resides, it'll block its movement until they can clear the zone. It's not uncommon for the Doctor and FBI Agent to check each other's movement like this, each trying to walk into the other's vicinity. Humans sure are a strange and confusing species.

Back to the question of weapons. There is no danger of physical harm in E.T., the problem you have to overcome is your energy consumption. Earth's strange environment takes its toll on our intrepid space raisin, and even just moving around saps energy from your total with surprising rapidity. E.T. can also run, caused by you holding down the button, which increases their movement speed but correspondingly drains energy much faster. If E.T. runs out of energy, his human friend Elliot will come find him and, through a process described as merging (?), give him 1,500 energy back a limited number of times. This is just a stopgap though; E.T. starts with 9,999, and unless they're close to winning the game he'll probably run out again soon.

With luck, you'll collect the three phone pieces, call the ship, and finally be at the landing zone at the exact moment the timer runs out to win the game... or, most likely, one of the humans will show up and spoil E.T.'s rescue. Then E.T. will have to find the Call Ship zone again to restart the timer. Maybe this time they'll have better luck, or maybe it'll happen again and again. Things like this are why Earth receives so little alien tourism money. 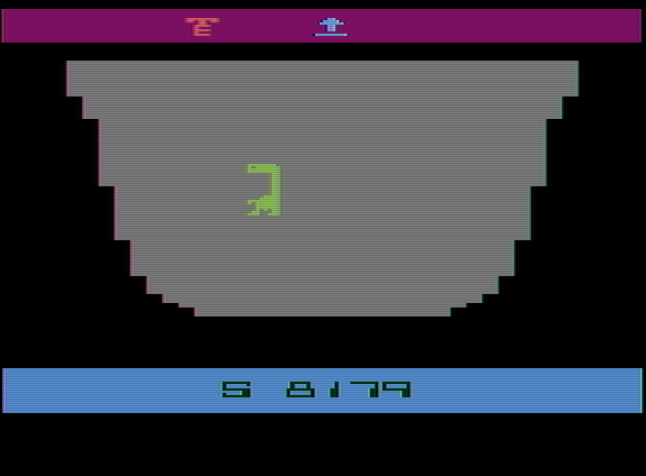 If you like the idea of ET but want to try a version missing some of the frustration, the owner of the site neocomputer.org has hacked the game a bit to make it a bit more playable, although at the cost of slightly worse graphics. A description, his notes, and the modified game rom itself are available here.

Raiders of the Lost Ark, naturally. Or one of the other complex adventures on the VCS and covered in this book: Adventure, Haunted House, Riddle of the Sphinx, Private Eye, Pitfall II, Mountain King, Dragonstomper or Sword of Saros.