Angels, Devils, and Boomsticks: The Making of Demons with Shotguns - Preview

Author David L. Craddock presents an excerpt from "Angels, Devils, and Boomsticks," the first story to be serialized in Episodic Content, a new serial webzine that publishes stories about the making of games and those who make them.
David Craddock
Blogger
March 04, 2015

Angels, Devils, and Boomsticks: The Making of Demons with Shotguns 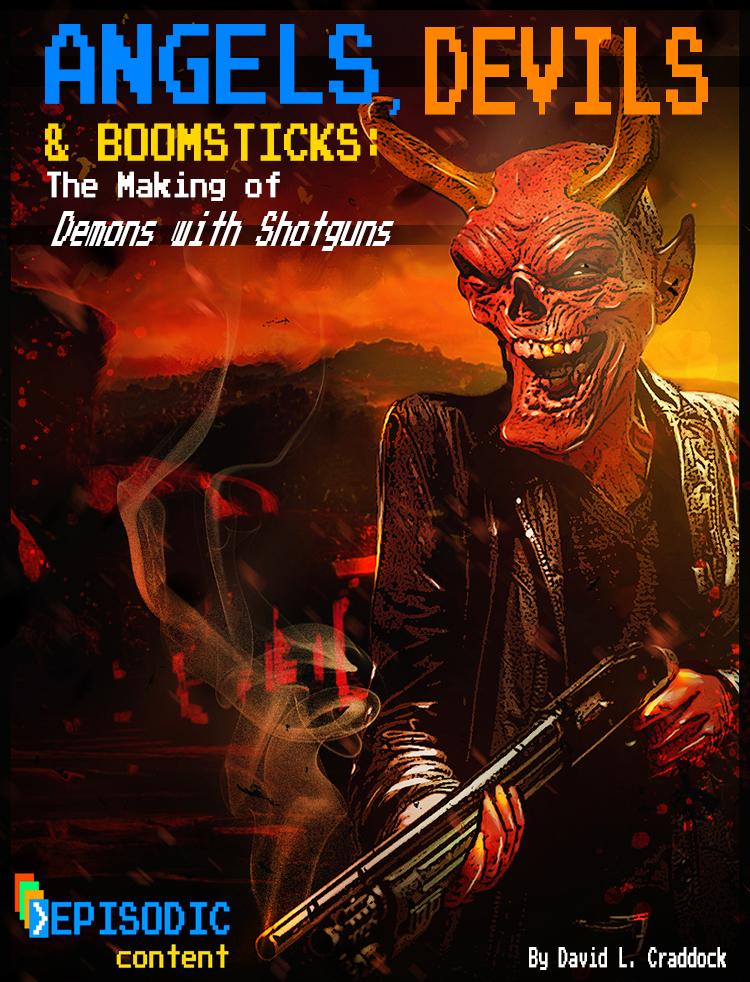 Demons with Shotguns is much more than a fun game. The arena platformer, similar in play and style to Towerfall, is the brainchild of Nick DiMucci, an indie game developer who has dreamed of making games since he was old enough to hold a controller.

Nick is closer than ever to realizing his goal. He submitted Demons with Shotguns to Steam Greenlight in late January, where it quickly attracted the attention of thousands of gamers interested in seeing it published; and is gearing up for the upcoming PAX show, where he'll be demoing his hard work to anyone who wanders by his booth.

For Nick, the reality that he'll be soon showing off his own game at one of the industry's most popular trade shows is surreal. Not because it's a major step toward achieving his dream, but because, just a few short years ago, a nagging fear took root and almost convinced him to give up.

I talked to Nick for the debut story published in Episodic Content, my new webzine that serializes stories about games and the people who make them. Chapters are published monthly on Patreon, and subscriptions start at just $1 per month for each chapter. What follows is an excerpt from Chapter 1 of Nick's story, Angels, Demons, and Boomsticks. You can read the complete first chapter on March 10th when the inaugural issue of Episodic Content goes live on Patreon.

From a young age, Nicholas DiMucci had life all planned out. He would parlay his love of video games into a career designing the next smash hit, guaranteeing him a star on the walk of video-game fame next to names like Shigeru Miyamoto and Cliff Bleszinski. "I remember writing letters to DigiPen when I was in fifth grade—this was when they were in Canada—asking how I could get accepted there when the time came."

DigiPen Institute of Technology was the perfect training ground for aspiring developers like DiMucci. In 1990, the technical school entered into a partnership with Nintendo of America and offered a post-secondary program designed explicitly for teaching students how to program games. DiMucci and DigiPen seemed a match made in thumb-twiddling heaven. There was just one problem. "I had the completely wrong and stupid notion that you had to be a math genius to be successful, so that always scared me off," he admitted.

Visions of nightmarish equations that filled up entire notebooks shook DiMucci's confidence. The 3D games he played were grounded in equations used to render environments out of complex geometrical shapes, and physics that determined how players moved and the angle at which grenades bounced off of walls.

Convinced he was not cut out for game development, DiMucci shied away from computer science. He pinballed between several majors before settling on film studies at Mercy College in 2004. For a while, DiMucci believed he was on the right track. Between semesters, he attended a six-week workshop at New York Film Academy in 2007 where he wrote, produced, edited, and directed three short films. When he was not behind the camera, he acted in student projects. Reorienting his plans for the future, he set his sights on getting his undergrad degree and continuing his education at a prestigious film school.

DiMucci felt little excitement upon graduating in 2008. Instead, he felt stuck. His degree was not landing him any jobs, and the notion of paying thousands of dollars to attend film school suddenly lost its luster. He began to reconsider making games, but not as a programmer. Drawing on his background in film, he introduced himself to a team of amateur developers who wanted to create a pack of tailor-made levels, known as a modification, for Valve Corporation's Half-Life 2 shooter on PC. Mods were typically released at no charge, but their makers could gain exposure if their mod became popular, potentially leading to employment offers from studios. DiMucci joined the team as a writer and designer. "I wrote the script, wrote dialog, journal entries, [and so forth]. I helped flesh out the initial idea. It's actually a pretty good story that I'd love to visit again one day."

Shortly after he joined, the team drifted apart. Some members lost enthusiasm, while others chose to pursue different projects and passions. Fortunately, there were other avenues into the games industry. DiMucci downloaded the Unreal Development Kit, a free toolset used to build levels for Epic's Unreal series of first-person shooters, and started designing expansive maps for Unreal Tournament III. He instantly felt at home. Level designers stitched together maps by dragging and dropping modular elements such as terrain, monsters, weapons, and buildings assembled room by room — operations that could be performed without delving into trigonometry or physics.

For the first time, achieving his boyhood dream seemed plausible. Reinvigorated, DiMucci applied to The Guildhall at Southern Methodist University, which offered a program dedicated to level design. The Guildhall accepted him, but he ended up turning them down. Moving to Texas seemed too big a step to take. A move to Connecticut, however, held much more potential.

"My then-girlfriend, Sarah—now fiancé—graduated shortly after me and got accepted to the University of New Haven in Connecticut, so I decided to follow her there and pursue a graduate degree in computer science. I had nothing to lose at that point, and felt learning to program would open a lot of doors, and it did."

For DiMucci, who still worried that advanced mathematics would stand in the way of programming games, beginning a master's program in computer science was like an acrophobiac conquering their fear of heights by signing up for a skydiving course. "I just decided to stop letting that fear prevent me from trying and came to realize that I would just have to work harder in order to be successful. Thankfully, I quickly learned that a lot of software development actually doesn't involve much math." He found his footing quickly and climbed the ranks even faster, gaining acceptance into an honor society that recognized students for their success in math and physics curriculums.

Still set on making games, DiMucci discovered GameMaker, a software package that allows anyone to drag-and-drop their way to fully functional games. GameMaker was versatile and simple to use, but no longer appealed to DiMucci. His fear of math was dwindling. He tackled linear algebra, geometry, and trigonometry with alacrity, accepting that game programmers needed a solid background in those subsets of mathematics. "To this day, I still struggle with certain topics, but I'm improving [as I face] problems I have to solve. Again, it's probably just a matter of having to work more than the next game developer, but it's what I have to do."

As his skills ripened, he experimented with more advanced software. "I started delving into XNA [Microsoft's suite of game development tools], which I used to develop my master's project, Deep Space Dog, an endless side-scrolling space shooter starring my dog. It never really left the prototype stage, but looking back, I'm still proud that I was even able to piece something like that together."

Nearing graduation, DiMucci got together with some of his classmates and talked about fashioning a clone of the popular Words with Friends mobile game. Unlike the original game, their clone would accommodate hundreds or even thousands of players simultaneously. The idea seemed a surefire way to strike it rich. They worked for six months until life took them in different directions.

Undeterred, DiMucci pressed on and received his master's in computer science in 2011. Surprisingly, the first thing on his to-do list was not to shotgun his resume to game studios. He had heard horror stories about life at big studios like Activision and Electronic Arts: 100-hour- work weeks, low salaries, broken marriages, and mental breakdowns that sent developers fleeing to nine-to-five programming jobs that delivered a better salary-to-hours ratio. After a short stretch writing software for a medical company, he joined 3M in November and set to work writing user interfaces and software used by healthcare companies and government organizations.

Holding a day job did not mean making games was off the table. In April 2013, DiMucci joined Ludum Dare 26, a game-development sprint — known among participants as a game jam — where entrants attempt to cobble together a functional game in 48 hours or less. He drafted a proposal for a small game called Overtime. The concept was simple: what if Unreal Tournament, a fast-paced shooter, had been made for the primitive Atari 2600 console?

Angels, Devils, and Boomsticks continues in Episodic Content, a serial webzine dedicated to stories about the making of games, the people who make them, and the culture that surrounds them. Chapters are published monthly through Patreon. Click here to learn more about the webzine; click here to check out Demons with Shotguns on Steam Greenlight; and last but not least, click here to just see how expertly Nick DiMucci has taken the math bull by the horns.