An Inviting Mini-World: How Nintendo Made Animal Crossing

Chances are that if you know somebody with a Nintendo 3DS right now, you know somebody who's playing Animal Crossing: New Leaf. The game was already a smash hit in its home territory, where since its release in November, it's sold 4 million copies. Nintendo revealed via its Facebook page that five days after it hit the U.S. market, it had already shifted 200,000 units.

What makes the game so enduringly popular? Months after its initial release, you can find Japanese players still Tweeting fresh photos of their towns and their homes. How do you design for longevity? And why is the game gentler than its predecessors?

At last week's E3, Gamasutra sat down with Nintendo producer Katsuya Eguchi -- also the producer of the Wii Sports series -- to ask him some questions about the game's design.

It's a world with rules based on the way things work in the real world, in terms of economy and human relationships. How do you decide how those kinds of rules work in a game like this?

Katsuya Eguchi: We take these into consideration when making all games, but specifically with Animal Crossing, our intent was to create kind of a parallel world, a world that's kind of similar to your own but also different.

And you spoke about relationships. There are people in your real life that you like and some that you don't like. There are different personalities that you are drawn to and others that you might want to stay away from. Also, people look different, so all of the characters in the game are created to look different.

You mentioned the economy. We created stuff that you might want to buy, but in order to buy those things you have to make money, and in order to make money you have to work... our intent in creating in Animal Crossing was to create this mini-world that you live in, so certainly we take into consideration those rules that you have to live by in the real world, and those are reflected in the game as well. 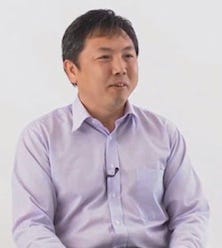 By necessarily creating a world and creating rules, you also create a set of values. By what's valued in the game, what you value as a person is communicated through the game. Can you talk about that?

KE: You speak about values; everyone has different values. Some people might think a certain item has more value than another does, or may think it's worth it to spend bells on a particular item when someone else doesn't. It's all kind of like things in this life -- this value system.

And as you show it off you see what other people have done with their spaces, that will also shape the way you feel about your own town. It should be this kind of automatic feedback mechanism when you play with another person and see what they've done. So it definitely shifts and changes, but it's all a reflection of that person's values -- the values and beliefs they hold.

With New Leaf, we were able to take that self-expression to the next level. You can customize not just your character, but your town this time, and you can apply designs to furniture, and you can share all of this with the Happy Home Showcase and through the Dream Suite. So all of this has been made for people to share their own reflections of their personalities.

Speaking about player expression, on one hand it is easy to share things like the way you lay out your room, or the designs for clothes, but to go back to the question of values, how do you share your actual beliefs? Can a game reflect who that player is and is that something that you want to do?

KE:  As for someone's beliefs and how much you can actually convey through a game like Animal Crossing, I think it also depends on how expressive the person is through the tools within the game. There are certainly famous personalities in Japan who have created elaborate towns in Animal Crossing, and you can really see their personalities through what they've done with that space. Certainly, again, it depends on how adept a person is -- it's not good or bad at playing the game, it's how well they express themselves, through the tools that are available in the game.

Another thing you might discover through this, you might be playing with a friend and you go into their house and, "Wow! It's a mess!" You'd never seen that part of that person's personality, and, "Okay, maybe Person A isn't as neat and tidy as I thought they might be." So these kinds of things -- there is a lot of discovery that can happen in a game even if someone's belief system isn't explicitly stated. 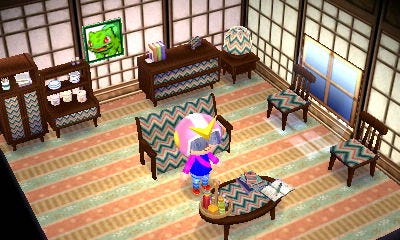 I think that this game is more free. It's been awhile since I played an Animal Crossing, but I feel like you have freedom. Weeds don't pop up as much. There are more choices. The animals don't seem to get mad at you as easily. Was it your decision to make the game more free for players to enjoy it without consequences?

KE: Yes, you're absolutely right. With regard to the animals and their not getting so angry so easily, our basic stance is that these animals are friendly. There are certainly some stronger personalities among the animals, and that's reflected in their conversations, but they all still default to loving the player character. That's something we made sure to put across through the text. 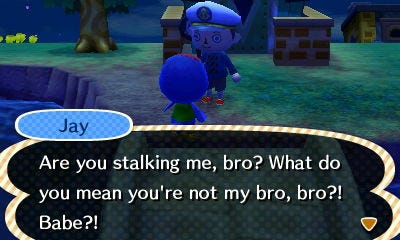 In regards to town living, we didn't want it to feel like a place you had to go, like it was a pain, or a hassle, or anything like that. Something as simple as watering your flowers, while it's something you still need to do -- flowers will still dry up -- we added things like your flowers will sparkle after you've watered them, so the player doesn't have to be like, "Okay, I've watered that one, I've watered that one..." There's a visual cue there that says "Okay, I've taken care that, that's done. Let's take care of something else."

We've tried to lighten the stress of town life and made sure it's somewhere players want to go, not somewhere they have to go.

Mr. Resetti has also been made a nicer guy this time.

I feel as though I can relax with this game. Do you feel it's important to create a game where people can escape from the stress of their lives and relax while playing?

KE: We didn't specifically try to create a place for players to go to relax, necessarily. But it is a place that is all your own, for you to do what you want with it. So in that sense, I guess that's the freedom you were talking about earlier -- as a result of that, if it becomes a relaxing space, then great.

Individual goals will differ. It's not just a leisure town. It's a town with a to-do list, but the to-do list shouldn't feel like bad pressure, if that makes sense. It's good stress, as opposed to real-world bad stress.

This game is quite different. Most games, even a Mario game, you play to completion. You might play it again, but that's starting over. This is a game you'll play for a long time. How do you design for that?

KE: At a certain point it will end, but in the same way that life does, every day -- to day, to day, to day -- it keeps going. In the same way, we wanted your life within Animal Crossing to keep going, so we built into the game a mechanism to be sure that there are always new discoveries for players. You like something one day, and then you may discover that you didn't like it as much as this other thing. So there's always something to strive for.

We also built into the game a feedback mechanism, where you're always getting feedback from within the game, from animals saying they like certain items and asking you if you'll trade with them, or playing with friends. Friends may give you feedback and you can see what they're doing with their towns, and get new ideas.

It's been out in Japan since November. Are you surprised at the amount and length of play you've seen from players so far?

KE: I'm not really surprised. I actually see how that could happen. One reason for this is, especially if those players aren't playing alone, if they've found a way to share everything they've done within their town with other people -- whether it be through the DS Image Upload tool that recently went live here in The States that's been out in Japan for awhile now. 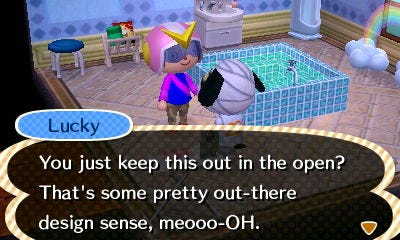 We've built into the game ways in which people can share their towns with their data and their creations, and I'm sure that people are receiving feedback. Something as simple as the turnip prices, if you had a network of friends who were playing the game, you have that many more opportunities to sell high.

The game is built to encourage communication, and I think probably those people are taking advantage of that. We'd love to see the same thing happen in the U.S., in the Americas, and Europe as well.