Adding Strategy to your Tactics

I've been doing a lot of thinking over the last few years about short arcs and long arcs in strategy game design. "Short arcs" would be referring to local, short term operations - so in a tactical game, this might mean "defeating THIS unit" or "making sure that unit doesn't reach this area", etc. Longer arcs would be longer-term strategic projects, such as "move my forces generally up to the north" or "go for a certain kind of unit on the tech tree" - things like that.

My background in videogame design is in traditional Rogue-like games. These games are interesting, because while they have long arcs in terms of the RPG mechanics and inventory management, in a way they really can be described as a looping tactical engine. In DCSS or Shiren, or even my own 100 Rogues, if you win the tactical game enough times in a row, you win the larger game. Winning the larger game can be expressed as a "tally" of how many times you won the short

Thinking more about smaller turn based/tile based games, I find that a lot of the time tactics seems to become dominant. For instance, in my game Auro: A Monster Bumping Adventure, it started off as a "boiled down" Rogue-like. Eventually I came up with the bumping mechanism that is so central to the game. I thought of Auro, and Rogue-likes more generally, as strategy games. But ultimately, and not exactly intentionally, Auro was pretty much a pure tactics game. It’s more just a result of a process of eliminating traditional design patterns that I found to be problematic.

The classical way that developers have added longer arcs to tactical games has been to have a second screen, from which you draw a few variables, such as which troops have survived, what loot you've found, and things like that. You often have some kind of base building or RPG mini-game, as is the case in X-Com, or Into the Breach. But what if you’re interested in asking the question: “how can I make the tactical game - the battlefield game *itself* - more strategic?”

That was my starting place when I started working on Gem Wizards Tactics back in 2019. Since then I've picked up a few pieces of advice that I think are applicable to almost anyone making a turn-based tactics game, if they want to give it some longer arcs.

Technique #1: Increase your grid size. If your grid is like 4x4 or 5x5, it's just going to be really hard to create longer arcs on a grid like that. Of course, you can still do it with integers in a spreadsheet, like for example a character that levels up slowly over time, and we'll talk about that in a minute. But in general, if you have a grid, I really recommend taking advantage of it. And if your grid is too small, it's going to be difficult to allow players to make "longer term decisions" with regards to positioning on that grid. The size your grid should be is going to vary wildly for most games, but I think in order to have longer arc grid-based decisions, you’re going to need the grid to be at least something like 10x10, 12x12, or something in that ballpark.

Just a quick caveat that of course you also want to be careful not to make your grid so large so that the game just becomes tedious. The classical “entire turns spent just moving your units forward” problem has plagued many turn based games.

Technique #2: Visible long term choices: Most games have some kind of “information horizon” (also see this video on the topic) - a line or a state, beyond which which information is hidden from the player. 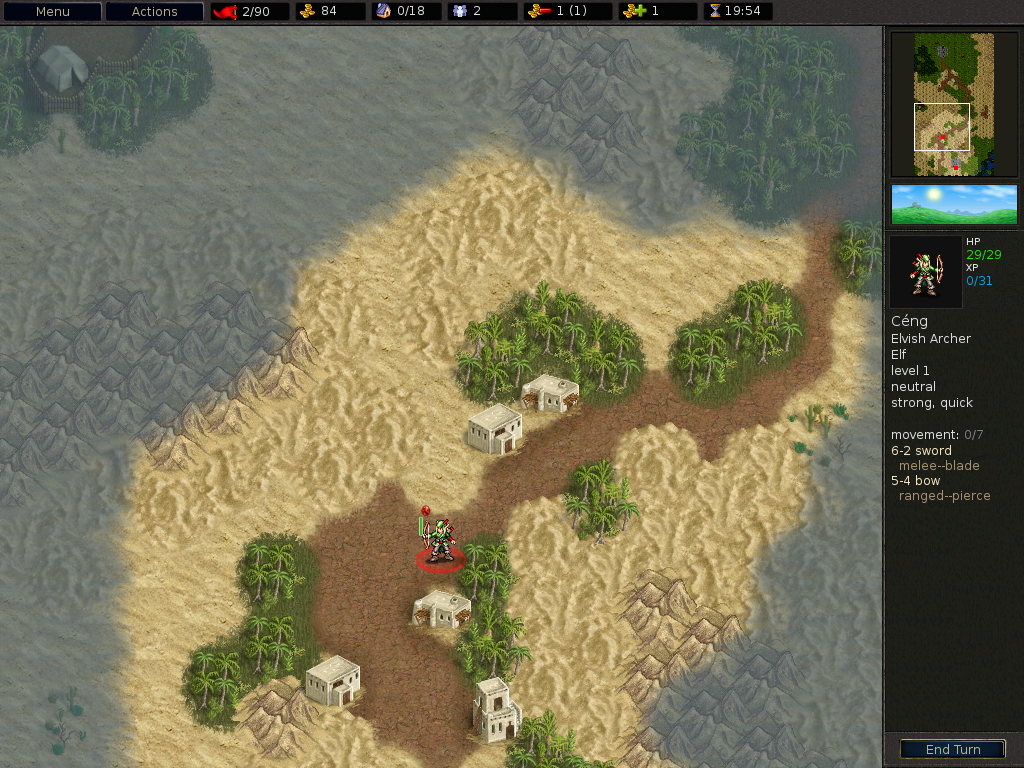 In tactics games, this most often exists as a “fog of war”. Fog of war is great in that it limits the player’s “play area” roughly to a certain size - it prevents you from seeing the entire map at once. This means that the player is never asked to “calculate out” many moves in advance, because it’s literally impossible to do so. This tends to have a very “freeing” effect over the player; in terms of hard calculation, they only have to look at the small area in this little radius here.

However, it’s also important to make sure that some things are visible, far off, through the fog. For example, in my game Gem Wizards Tactics, I have five towers around the map that are visible to the player. You can’t see enemies that are guarding the tower until you get close enough, but you can see that the tower is there. In this way, the player has a longer term thing that they’re aiming for.

In my quest to add more long arcs to the game, I also wanted to change what these towers mean. Originally, it was simple: capturing a castle captures its flag, and a small number of enemies also carry flags that can be obtained by defeating them. Get four flags, and you win the match.

The problem - or, not so much a problem per se as just, a missed opportunity - was that each flag kind of meant the same thing to the player. So what I added were these three icons - the star, the heart and the lightning bolt, each of which give your units an immediate effect when captured. The heart heals the capturing unit, the star levels up the capturing unit (which can last over many missions if you’re playing Campaign mode) and the lightning bolt gives all your units one bonus action point. These all give you different kinds of bonuses, so you can make decisions about what you need to be going for in a longer term sort of way based on that. 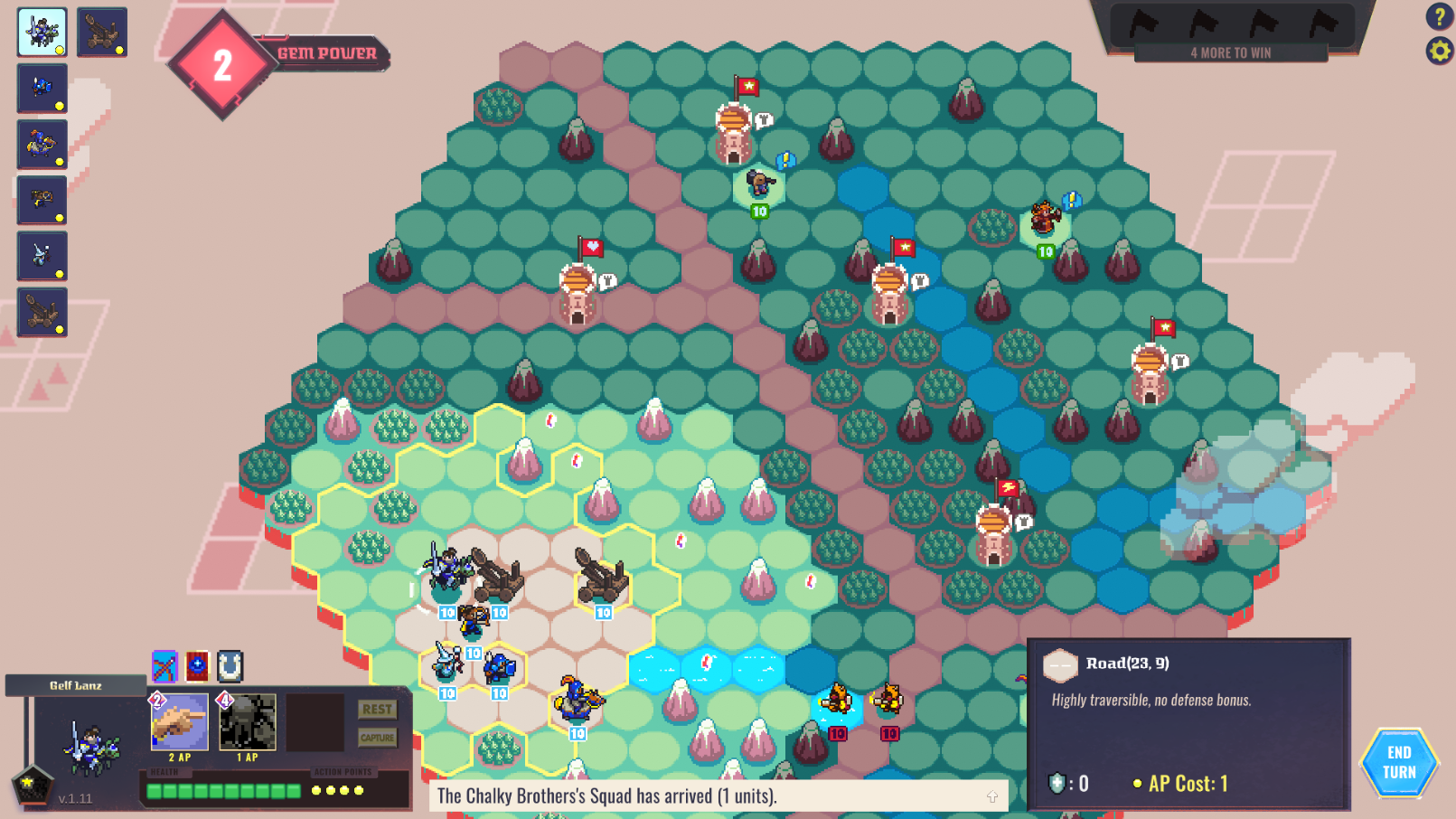 Above: the flags with different icons in them, visible through the fog, in Gem Wizards Tactics.

At one point in the development of Gem Wizards Tactics, I had a rule where when you captured a tower, it would pop up a screen that gave you three choices. One choice was the “rush” choice, one choice was the “defense” choice, and one choice was the “econ” choice. That’s alright, but by doing it this way you’re taking so much “long arcyness” out of the game. Because when you’re heading over to the towers, all towers are worth the same thing: one “pick” of those three options. You don’t have to decide before you get to the tower which one you want, so it really ends up being more like this “looping of smaller arcs” where all the sudden you reach a tower and then get to pick whether you want power now, later, or much later. That definitely has some long-arciness to it after you get it, but it’s more like a “sudden arc spike” than the continuation of a more holistic arc.

The smaller arcs already have you moving around on the grid and doing tactics stuff, so why not have the long arc decisions (i.e. go for the rushdown tower, or the defense tower) also be taking place on that same grid. By doing this, you create a more holistic and highly-coupled latticework. When your long and short arcs have a relationship to each other basically what you get is more depth: each small tactical encounter is contextualized differently by its longer-arcs, and vice versa.

Technique #3: devaluing tactics. This is an oldie, but a goodie, when used responsibly. Sometimes, your game has long arcs, but they get “stepped on” by the shorter arcs. For example, in some tactics games, it’s kind of like a series of local encounters, and if you win every little tactical fight, you win the whole game. The “long arc” becomes more of just a “sum total” of all of the local little tactics battles and how they went.

Sometimes the answer isn’t to add more long arcs, but to diminish the impact of your short arcs so that the longer arcs you already have can flourish. In tactical wargames, this has almost always been accomplished in one way: by having random number generators (or dice) determine damage in combat. This does indeed do the job, because you can no longer guarantee victory in every encounter. I do recommend considering using this for tactical-turned-strategy tactics games, although I recommend keeping the randomness somewhat uniform, either by reducing the range (i.e. 3-5 damage vs. 1-10 damage) or possibly by using something like a Dynamic Dice system. In Gem Wizards Tactics, the damage range is 3, and unit health goes up to 10, for reference.

But there’s other ways to do this as well. A game that I really love, Fantasy General, has a system that is such where if two equal units fight each other, they will do equal damage to each other. There is literally no advantage to attacking first, and battling in general is largely almost always a trade off, no matter what you do. So it’s always a matter of “where do I want to make those trade-offs”. There are probably other solutions here too which can reasonably devalue tactics and I look forward to seeing other ideas!

Technique #4: Arbitrary long arcs. This is the least good, but still an effective way to create long arcs in a tactics game: simply add explicit, arbitrary abilities to invest resources into other resources that accrue over time. To give the clearest but also probably worst example, just imagine an ability that costs $20 to use now, but gives you $4 every turn for the rest of the game. After 5 turns, you’ll have made back your investment and after 10 turns you’ll have doubled it. Again, not a great example, but these kinds of arbitrary “rising value” dynamics do create long arcs of a sort. You can’t rely on this alone, but this joined with some of the other topics can help to create a tapestry of longer arcs in your strategy game.

In my game, one of the factions is called the Business Demons. Their leader is Bill Milton, the CEO Wizard. He has a stock portfolio and gains money every turn, at a faster rate if he does certain things, such as build roads - and of course, this is nice because “there being a lot of roads built” means a lot for your tactical game. But also, using his abilities costs money. So this turned out to be a pretty good and functional example of such a thing, that also added a ton of flavor to the game. 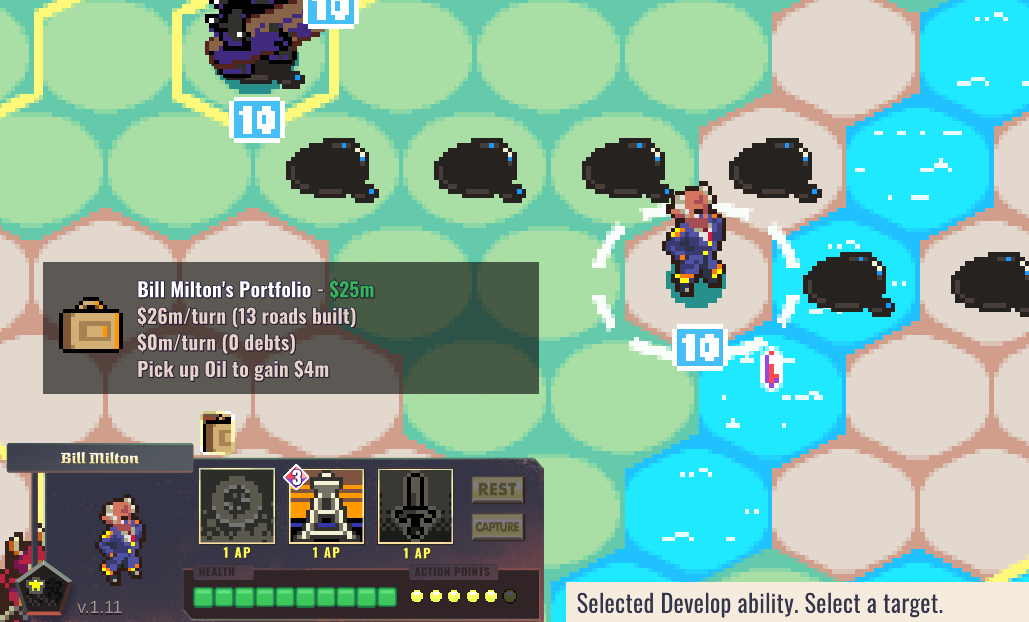 I hope this is useful somewhat, if for nothing else as an idea to compare your designs against. Thanks for reading - and if you're curious to see more ways that I've added long arcs to a tactics game, I definitely recommend checking out Gem Wizards Tactics!