Motivated by recent award nominations, I decided to do a postmortem of Voodoo Friends. Mostly because I want to tell how the game came to be, but also to celebrate the game's 1 year anniversary on iOS and to list some of the things that went good and bad.
Jimmy Marcus Larsen
Blogger
May 04, 2013

I have been wanting to write this postmortem for a year or so, but only now, following recent nominations for Game of The Year in the Danish game industry awards Spilprisen and for Best Nordic Handheld Game in the Nordic Game Awards, have I found the motivation to actually do it. I guess I sort of realized, that this game might be among the best games released in the Nordic region during 2012, even though it never took of as a global hit.

What is Voodoo Friends?

As you probably haven't heard of Voodoo Friends before, I'll begin with a description of the game, before going into how it came to be. Voodoo Friends is a puzzle platformer, with the emphasis on the puzzle part and not on the platforming. You are directing three voodoo-dolls around in a level, where the goal is to collect all the yarn balls before reaching the exit. Each of the three voodoo-dolls has unique abilities, and a level often requires you to make use of each of them. The game starts of easy, but pretty soon the levels get devilishly difficult. The game is available on the web via Chrome Store and different portal sites, and also on any iOS-device here. It was created at danish company CEGO. I was leading the design, and two artists, three programmers and one audio designer also worked on the game. 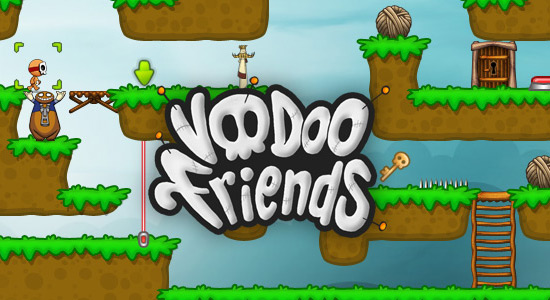 How did it all begin?

Voodoo Friends was conceived during the early summer of 2010. I was mostly working from home, as I was taking care of my kids, while my girlfriend was visiting New Orleans. This meant staying up late to work, while the kids were sleeping. One evening, on the brink of sleep, I was thinking about The Lost Vikings, and how I really liked the idea of three different characters working together. I didn't like the action elements though. I wanted a game with much more of puzzle oriented feel to it. Something more along the lines of Lemmings, Toki Tori or Mario vs. Donkey Kong. I soon came up with a set of mechanics I liked, and I build a small level in LEGO. It really seemed fun, but my super generic space theme was dragging it down. It needed some sort of thematic originality, but I didn't have any great ideas. It wasn't until a few days later, when my girlfriend returned from New Orleans with a cute voodoo-doll souvenir, that I really knew how to theme the game. It would be about three voodoo-dolls, and you would pierce them with needles to grant them special powers! That is how the initial Voodoo Friends concept was conceived. 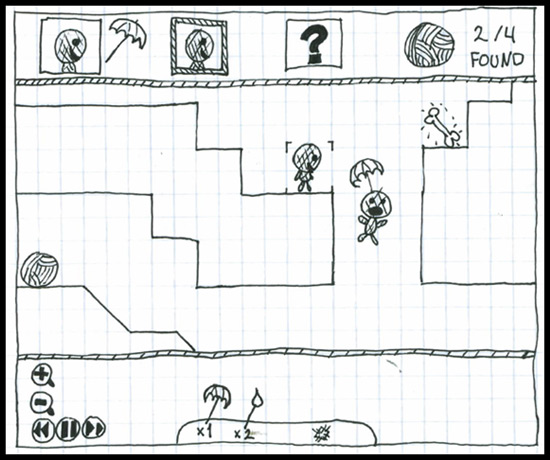 Then I had to pitch the concept internally in the company, and luckily it was selected for production. We began working on the art in the late summer of 2010, and actual production took place during 2011. The game was finally released in early 2012.

In this postmortem I'll discuss two things that went right, and two that didn't turn out so well.

Letting players create their own levels

One of the features we immediately decided to have, was a level editor. We needed one for ourselves anyway, and even though polishing it such that the players could figure out how to use it took us a while, it proved to be worth it. We wanted to be able to continuously release new levels for the game, and the only way that could happen, was if we had the players create the levels for us. They proved more than capable of that! I created almost 100 levels for the initial release of the game, but after a year players had made more than 40.000 levels – to this date around 1.000 of those have been released into the game, and we could easily release another 5.000 quality levels. Many of those are much larger and way more difficult than the levels I spent weeks to create – and, surprising to me, our best level builders are 40+ women. Those girls are geniuses.

With hundreds of levels created each week, we could never play enough of them ourselves. That is why we created a system, that allowed players to play a random new level from another player and rate it after completing it. These ratings helps us decide which levels to release. Also, we have stats like the quit-count and completion-percentage of each level, allowing us to see how difficult it is. This system has the added effect, that the players never run out of levels – there is always a random new level available to play and rate.

Both of these systems – the level editor and the level rating system – is only available in the portal site version of the game. This allowed us to skip a lot of infrastructure work, as we only needed to support our own back-end system. On Chrome Store and iOS, these features are missing – but the players still get the new levels, once we release them.

I don't think anything went truly bad, but there are two things I would like to mention.

The initial release on our portal sites went well, and levels were flowing in at a nice speed. We thought that releasing on iOS would be pretty much the same – put the game out there, and watch people play. Obviously, it didn't go that way. Making people notice the game was difficult for us, because we didn't have any experience with the platforms. Writing a post on the Touch Arcade forums wasn't enough, but we didn't do much else. We did reach the top spots in the Danish charts for a few days, but globally it didn't work at all. The portal site version was doing fine, so we just sort of gave up on promoting the iOS-version – even though it's actually more fun to play, and these days it's that version getting all the award show attention.

Obviously, making money from the iOS-version didn't go so well either. Initially we charged money for both the game and for new levels. It didn't work. People would play the free levels and then stop. We tried a lot of things, but in the end making everything free with ads on the loading screens seemed to work the best. We also have one in-app payment, where people can buy extra help for a level – it works okay too, but it's sort of cheating if you complete a level that way.

Voodoo Friends was also our first attempt at creating a game in HTML5. These days it's pretty common, but back in late 2010 we were breaking new ground. It's not something that went wrong in that sense, but it did lengthen the production time a lot and the level of polish we could apply, was also limited in a way. Today though, we can see that it was time well spent, and the experiences we had are still of great value in current HTML5 productions.

In the end Voodoo Friends is a game I'm very proud of. More than two million different players have tried it, and the feedback has been almost solely positive. It peaked at around 400.000 daily active users, and today it's pretty steady at around 25.000 players each day. It didn't win the Game of The Year award in Denmark (Hitman Absolution did) and winning Best Nordic Handheld Game in The Nordic Game Awards is highly unlikely too, with competition being three of the top grossing titles on iOS: Subway Surfers, Hay Day and Clash Of Clans. Voodoo Friends is an original puzzle game, with a solid core mechanic and lots of content, but it cannot rival those games when it comes to regular production value. There is a little shelf in the App Store, where original titles lie around waiting to be noticed and appreciated. Voodoo Friends is happy there (but come and visit sometime).