A New Dimension: Twisting the World in Video Games

On the manipulation of three dimensional space in video games, and how a change in medium can vary its effectiveness; based on the differences between the omniscient perspective of Back to Bed and Monument Valley compared to the intimacy of Antichamber
Adam Smith
Blogger
April 09, 2015 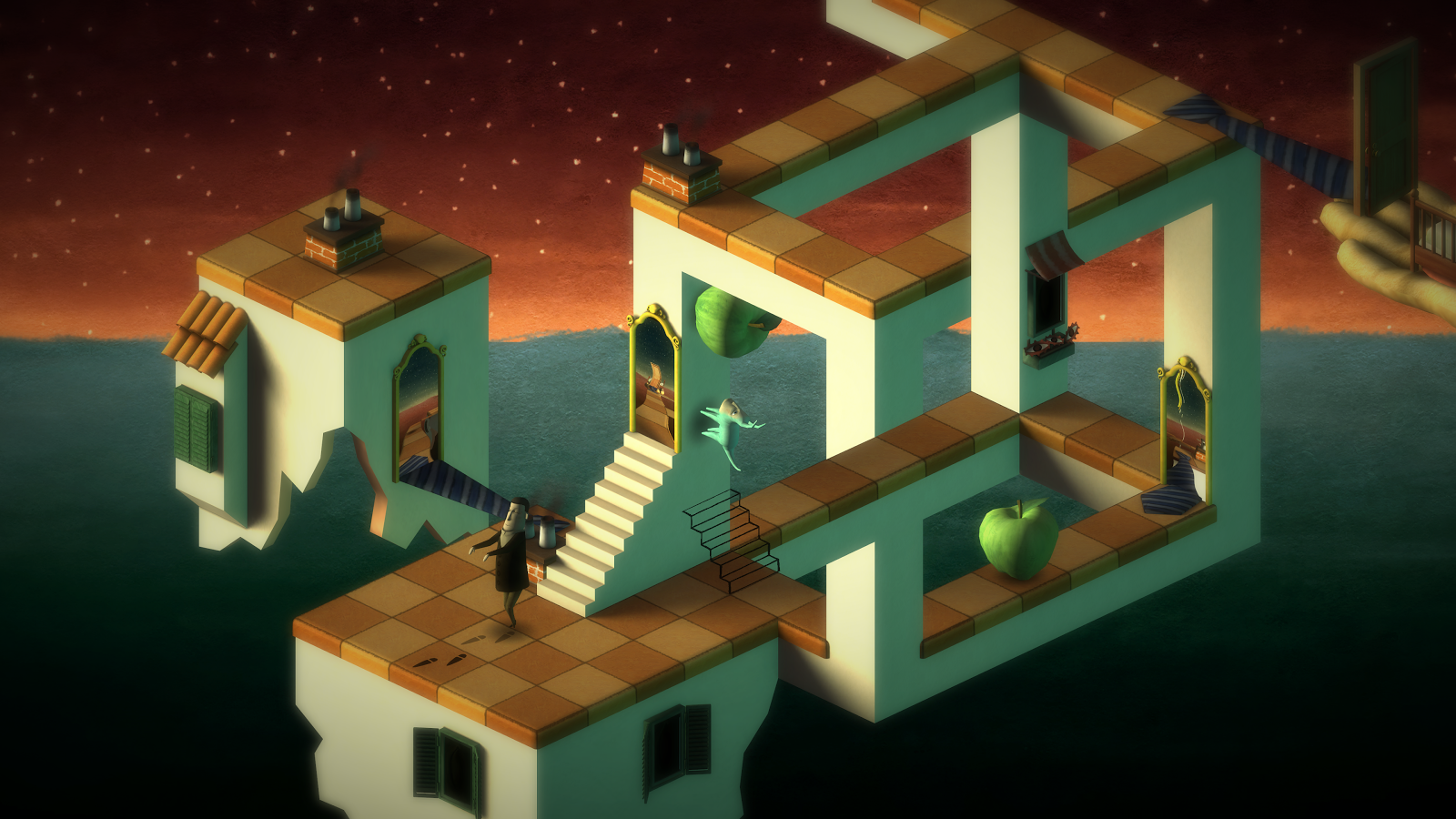 One of the most recent “Apps of the Week” on the iOS AppStore is Back to Bed from Bedtime Digital. The objective of this game is to guide a sleepwalking man, Bob, through a representation of his dreamlike state towards his bed. The player controls a manifestation of Bob’s subconscious, aptly named Subob, and must steer Bob by placing objects in his path or ridding this dreamland of enemies that would attempt to wake him up and prematurely ending the level.

As this is a game about dreams, the level design naturally looks like a mixture of “Dali, Escher and Magritte”, according to PowerUpGaming.co.uk. There are melting clocks and flying chess pieces; the walls bend at 90° angles and the end of one path can be its own beginning, reminiscent of Escher’s Waterfall painting. But what does this sort of design mean for a game, and, more importantly, is it meaningful in a game?

This particular style of level design is not unique to Back to Bed. Both Monument Valley from ustwo, or The Bridge from The Quantum Astrophysicists Guild presents this similar Escherian quality. Even Portal, to an extent, contains this element of pseudo-space. What is there is not all that is there. In these games, the primary puzzles are not anything presented from the world the player inhabits, but rather the world itself. In this respect, these games provide the ultimate simplification of the goal of any video game seeking an emotional reaction; the player feels in a video game because their world has changed. Ironically, in Back to Bed and Monument Valley, the player is not focused on emotional reactions, but intellectual ones, and as such the potency of their worlds diminish; the players are instead left with beautiful, but hollow, husks of levels.

First, some background to what I’m going to call pseudo-space in games; pseudo-space is the deceitful world – the world that is not as it appears to be. An example in a popular game – perhaps the popular game – is Mario. Upon Mario completing a boss fight and rushing to save the princess, a toad informs the player that “Your Princess Is In Another Castle”. That shock to the player that the world is not as they previously thought is the crux of pseudo-space on the most basic level. Games’ Spec Ops: The Line takes this concept further in its final reveal that the world that the player character, Sergeant Walker, has been through is a figment of his imagination (3:04-3:13). Walker tries to stablise his environment, telling the antagonist Konrad: “You’re not real, this is all in my head”. Konrad destablises the world again with “Are you sure? Maybe it’s in mine.” The potency of this reveal roots from the stability that the player assumed as they played the game – their realism suddenly dissolving away.

Antichamber from Alexander Bruce is perhaps the most accurate demonstration of pseudo-space. In this game, the player must navigate through a map that destabilises the player’s assumption of Euclidean (or three dimensional) space that can be based on actions as simple as which direction the player is facing – observation of the world, in this respect, directly manipulates it. Accompanied by the "true immersion" Bruce created by removing a death mechanic, the game made the player’s navigation of the game the challenge of the game, and recreated the impossible effect of experiencing a world that did not abide by three-dimensional space. As such, the player feels powerless, having to relearn the rules of movement that we take for granted in any other AAA video game. The implicitly known controls of WASD for movement and the mouse to change perspective were no longer in play and, until the player learnt the new rules they were at the whim of the pseudo-space.

In contrast, Back to Bed or Monument Valley, do not leave the player in this emotional state, or indeed any emotional state; the two tablet games give the player an omniscient perspective, and with this omniscience comes a loss of emotions. The player does not experience the abstract art as the character would, or even receive a reaction from Subob or Ida; instead, they look upon the twisted space from a height, able to perceive the entire game world. Unfortunately for the games, this reduces it to the two-dimensional space of the tablet screen, rather than giving the illusion of multiple dimensions. Michel de Certeau, in his essay Walking in the City, describes how medieval or Renaissance painters, in their representation of the city from great heights, presented the city as seen in a perspective that no eye had yet enjoyed. It created a “celestial” or godlike eye. And with that new perspective comes emotions of elation, majesty, happiness. A person’s physical position affects their disposition. It is difficult to be down when you’re up.

So why does this feeling not translate to the tablet games? It could be said that this is due to the condensing of the game space – from the 14” of a laptop screen to the 9.7” of my own iPad 2 – yet this criticism does not hold up in comparing games that have been successfully ported to the handheld. Supergiant Games’ Bastion, for example, works just as well, from a design perspective, on both PC and iPad. No, I would rather say that the distancing of the player, because of the games’ bestowment of omniscient perspective, limits any emotive reaction from the game, other than appreciation of the art style, is their lack of connection between the player and their world. Subob and Ida are not ‘the player’ in the same way that Spec Ops: The Line’s Sergeant Walker or Portal’s Chell is; rather they are conduits for the player, adding another layer between the player and the world. This division is not even as simple as first/third person perspectives – even the isometric perspectives of Bastion or Transistor allow a connection between player and pseudo-space. The player is made into a god, not a subject, and the control over pseudo-space reflects that. To truly appreciate the beautiful surreal art that games like this build their world around, the player must feel a sense of sublime awe by them; however, to gain this sublimity, the world must feel unexplored until the game is done.