A review of the indie game "A Game With A Kitty 2: Darkside Adventures" by Zachary Levin.
Zachary Levin
Blogger
May 06, 2021

Today I am going to review one of my favorite games I played on my computer back when I was only 12 years old. I will be reviewing the game’s graphics, difficulty, controls, and selection of music. “A Game with a Kitty 2: Darkside Adventures” (will now be referred to as AGWaK2) is a nonlinear 2D platformer, created by indie developer origamihero back in 2006. You can download it for free on his site! I decided to review this game because I was recently revisiting a lot of the games I played during my teen years, and I remember enjoying this game a lot. 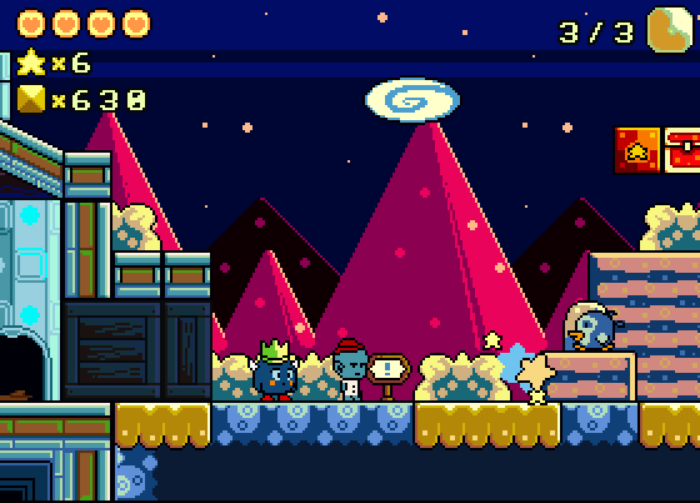 The first level in A Game With A Kitty 2: Darkside Adventures

In AGWaK2, you play as the Arch-Chancellor (aka AC) of the Imp King, who is tasked with retrieving the crown of the royal Princess Daphodil. You must run, jump, and use your abilities to defeat any monsters in your path and reach the end of every level in order to progress. In AGWaK2, you can find bombs you can pick up that look similar to the bombs found in Super Mario Bros. 2, and you can throw them at enemies and blocks. The AC can pick up stars found in treasure blocks and shoot them at enemies, or simply jump on enemies to defeat them. Each level has three or four rare diamonds that count towards completion rate as well as can be redeemed for hidden upgrades. Secret exits and levels can be found throughout the game, adding to the game’s replayability.

AGWaK2 sports very beautiful pixel graphics, even for being a pretty old game. A lot of the levels utilize warm and cool color palettes, and it simply makes everything comfortable to look at. The player has the option of running the game at 52 FPS or 60 FPS, as well as choosing between 256 color graphics or 32-bit color graphics. I tested playing the game in both frame rate settings and graphics settings, and found no distinct differences, but it's nice that players have the option to choose. Any computer should be able to run this game, even low-end computers. I could very well be nostalgic as I revisit this game, but at the time (2006), these graphics were incredible, especially when the game was made all by one person.

This game definitely feels like an old-school platformer at times. There were multiple times where I died due to limitations of the engine, as well as questionable game design. Some levels have leaps of faith and unfair ways to die. There was a time where I got crushed by a platform moving up from the ground (even though there was nothing above me to sandwich my character). I had another instance where I paused the game in the middle of a boss fight and left for a half hour, only to come back to the game over screen. I later found out that the game advances 1 frame every few seconds. Despite these fringe and uncommon issues with the game, I found myself still having constant fun with the game. The game does handle difficulty curving pretty well. A lot of the super difficult parts of the game are also optional, luckily.

Controls: Easy to learn, tricky to adjust to, difficult to master.

The game’s controls are simple and easy to learn, but can feel stiff and difficult to control at times, especially in the air. The game’s control scheme consists of the arrow keys to move, the X key to jump and select menu options, and the C key to run and shoot stars. The AC feels like he has a steel ball chained to his leg most of the time, especially when holding an item. Until you obtain movement upgrades, the AC feels heavy. Plenty of platforming segments are often tricky and occasionally perilous due to the stiff movement. Despite most of the enemies being slow and not too dangerous, it can still be scary when a few enemies can nail you even when you see them coming. Perhaps the movement is a product of its time, but by the end of the second world, I felt very comfortable with the controls.

The game’s soundtrack is fairly small, boasting only 14 tracks, but that doesn’t necessarily mean the OST is bad. AGWaK2’s style of music sounds like chiptune that leans towards Sega Genesis instruments. Regardless, it’s impressive that origamihero composed all of the music himself. My favorite track in the game is the Boss Battle theme. When I think of AGWaK2, this theme is the first thing that comes to mind.

Final opinion: Overall, this game may feel like a product of its time, but if you enjoy old-school platformers, definitely check it out. If you are interested in a game that is silly yet serious, and fun but challenging, this is a game for you. Considering this game is also free, there is no need to wait for a sale or price drop, and since it can run on any present-day computer, there’s no risk in getting the game!

Thank you very much for reading my review of A Game With A Kitty 2: Darkside Adventures!