A Feature Proposal From A Complete Stranger

I had fun while comparing two games, as I discussed in “Farm Heroes Saga vs Mystery Match: Deconstruction Comparison” article, and I didn't stopped and decided to create a fake "Feature Proposal" about one of these games.
Orcun Nisli
Blogger
May 13, 2016

This proposal is solely intended for my personal experimentation on game design. It is not requested by or submitted to the OutPlay Entertainment. I have no connection or affiliation with them. So, have fun while reading it and feel free to drop any comments.

I had fun while comparing two games, as I discussed in “Farm Heroes Saga vs Mystery Match: Deconstruction Comparison” article, and I didn't stopped and decided to create a fake "Feature Proposal" about one of these games. As I mentioned before, Farm Heroes Saga is walking on the boundaries of being a feature creep game while perfectly staying behind the line. So it was a better idea to focus on Mystery Match to design a new feature...

Mystery Match is a match-3 game with a narrative grabber and a minimal economy & UI structure. As I analyzed, it fails to build early retention factors because of early grinding and lack of “call to action” models. Also, I criticized Mystery Match for not creating a powerful game narrative, while its story gots stucked into short dialogue cutscenes (it should be noted, however, that increasing the text depth would not push the game on a better way). It works as a nice grabber, yet it lose its power even in early phases. In novelistic structure, Mystery genre builds upon a brain challenge between the reader and the protagonist (detective). Mystery Match misses to create such a challenge that would engage players in  the product.

Therefore, a new feature is needed for enforcing the early retention and helping the narrative grabber. This new feature must do this job without touching anything about the hard currency and by  adding as minimal UI as possible (to follow the Mystery Match’s design pillars). On this direction, I introduce a new feature proposal: Evidence Map.

Evidence map is a new map mode where the layout is the same, but instead of level buttons, there are 3-4 bigger evidence spots with question marks placed on each episode (spots placed on the outskirts of the map, not on the main road). When the player plays any level that is close to an evidence spot, with a success chance (that is 100% on first two evidence spots and very high chances on early spots, decreasing gradually on each episode and by star rankings), player unlocks an evidence. The player gets the “New Evidence Unlocked!” pop-up message and the evidence map can be reached once the level map appears. 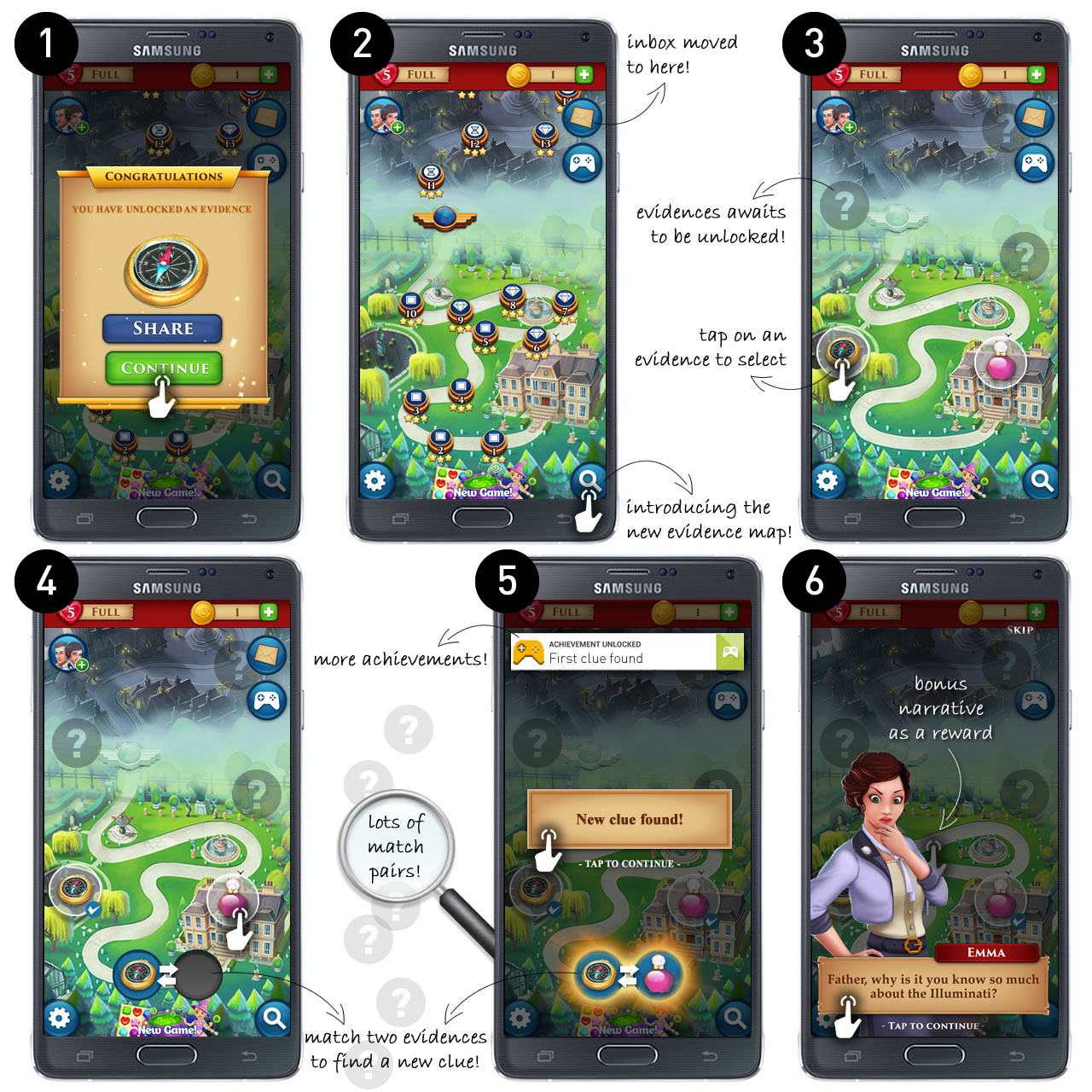 On the evidence map, player would match two random pair of evidences for a possibility of finding a clue that reveal the story more in depth and unlock new achievements. Same pairs could be matched multiple times to repeat narration. First two pairs of evidence are going to be unlocked  automatically and a tutorial will direct the player to match the first pair. After first narration, bonus tutorial ends by teaching player how to push the same button to return back to normal map.

Player is free to continue to play the next level or get into the evidence map to explore the mystery further. This way, the game flow of match-3 experience is not disturbed by longer narrative intervals, yet, the mystery narrative gets more intriguing and therefore creates an additional retention factor for the players.

Also clues will be use rewards for call back to action. Every week player will be notified with a new hint which two evidences could be matched. This is a more engaging call than any usual action calls. Also this feature could boost the virality by building a community that share the evidence matches to each other.

With this feature update, only a small change will be occur over the old UI: The “Messages” button will be moved to upper right of the map screen and “Show/Hide Evidence Map” button will be placed instead of this button.

This feature will not unlock evidences to current active users automatically. They need to unlock evidences by playing the old levels they played before. But with a small trick they will have 100% chance to unlock their evidences on previous episodes. A new panel is going to introduce this new feature to current users when they open the game first time.

Major reason for this feature is increasing the early engagement and retention so, 1 week of testing the feature on a small group of new users (and possible iterations) would be needed before the actual validation process.

Then actual validation must be done separately on two individual groups:

A/B Testing must be applied for both groups. Minimum condition for validation should be:

These KPI’s are the expected to gain a boost with the feature and must be closely monitored during validation:

Also some KPI’s must be closely observed especially on already pay users. By this feature, these KPI’s must at least stay stable: