Back from GameX, using my analysis of Dante's Inferno and Bayonetta, I then discuss the abstraction of difficulty between US and Japanese titles.
Josh Bycer
Blogger
October 30, 2009

While at the GameX summit this past weekend there was a public show going on at the same time. Both EA and Sega were there to promote their newest games, which were not only from the same genre, but were set up about 5 feet from each other, EA having a massive booth and Sega having one 4 person demo station.

Playing both games I found that it was interesting that while both are technically from the same genre, both titles design wise couldn't be further from each other.

(Disclaimer: My impressions of both titles come from their respective demos, at this time there is no way for me to know if the full versions are going to be the same or different.)

Let's start with Dante's Inferno, which I can start off with saying that I haven't read the book. Dante's Inferno at this time I could make a remark about if the designer's have read the book but I'll stop. DI looks and plays very similar to God of War featuring similar control schemes and attack styles.

You have a light and strong attack, some kind of holy bolt power, magic at the ready and the ability to do a long range grab with your scythe. I decided to play Di on the hardest setting as I feel if a game isn't balanced on that setting, then the game isn't balance period. Lo and behold I was right, the "challenge" of playing the game at that level is the fact that every enemy is juiced up with enough health to make them a minor boss. I spent a good 5 minutes whacking the first enemy until it finally dropped.

The combat system was very simple; pressing the light or heavy attack will start your attacks and at some point trigger some kind of flashy strong attack. The entire system felt pre canned as I sat there waiting for the animation to finish which is a great segway to the next complaint about fighting enemies.

Perhaps I've gotten spoiled by games like Ninja Gaiden Black where the enemy AI is designed to give you a challenge. The enemies in DI were practically brain dead standing around until they sprang into action with one of 2 attacks. Not only is the animation the same every time for either one but getting hit by them forces the player to endure the animation.

There was no way to counter attack which I even asked the rep who was there and she gave me some half hearted answer that I couldn't remember. Once the enemy hit me I had wait until she finished her little 3 hit combo before I could do anything else. The game then introduced 2 constants of action games, the weakling enemy that attacks in groups and the big guy who shrugs off normal attacks.

The entire thing felt very repetitive which for a genre that focuses on repetitive actions is not good. While playing around with the menus I found 2 different skill trees which I assume have to do with how you kill certain enemies. Now it's time to talk about the art and what will no doubt be a complaint once it gets out about DI.

(If any kids are reading this entry I suggest skipping this next section as it's about to get a bit disgusting.)

Within the first 10 seconds of the demo starting I had a chance to watch a naked women with a cut running from her breast down grow a tentacle out of her pelvic region. The rest of the time is spent watching her fondle the tentacle before the demo officially begins.

After I watched that I wasn't so much disgusted as I was disappointed. I can rationalize in some weird way that the tentacle is used as a weapon and that it had to come out of there, but the 10 seconds after really served no purpose other than to shock. Later on in the demo you have a fight on a moving platform while a giant naked lady is climbing up the tower in the background.

From reading the various bits of news regarding the game they just announced one of the achievements called "Bad Nanny" for killing demon babies. Maybe it's just me but I've reached a point where violence and sex is no longer considered mature to me. A while back I caught a few minutes of a Bob Saget stand up routine where he basically says every filthy thing you can imagine for an hour.

At first I was somewhat shocked by it, but after a few minutes it was like listening to a child who just discovered curse words and it became sad. That's how DI is feeling for me and I bet the developer's are relishing it, to make the player ask “what disgusting image will come up next?". Now it's time to talk about Bayonetta where everything is kept clean and pg 13...

For the first 10 seconds of the demo at least, which is longer than DI lasted. Bayonetta is created by the series creator behind Devil May Cry and Viewitful Joe and within seconds of fighting you can see the inspiration. The combat system was fast and incredibly responsive, you have 3 attack buttons: sword/main, kicking and her pistols.

Like DMC you can create combos by alternating attacks and there seems to be a huge combo tree available, which most of us won't probably use. The game also allows the player to end her combo in mid combo by pulling out her pistols. What I really liked about the game is how the designers have altered the defense system from DMC.

In Bayonetta besides getting smashed your defensive options is the always useful evasive roll; however the designers have a little twist with it. If you can time the roll to mere seconds before the attack connects you'll enter "witch time" which slows everyone down giving you some time to get a nice combo chain going without worrying about reprisal. From what I've seen it even worked on the first boss fight which was a nice touch.

Now I only had the option of playing Bayonetta on normal vs playing DI on expert so it is still up in the air how balanced the game is going to be but I did have a lot more fun playing it then DI. Not because of the imagery in DI but because the combat system was more intelligent then DI's. There is one little bit of context that I might as well spill it for you so that you can make up your mind about the game.

The main character's weapon is her hair which also seems to constitute her clothing. Meaning as she performs combos her clothes basically melt off her until the combo ends. To make things weirder to finish off a boss she uses her "climax" attack which uses all her clothing hair except for around 2 parts to keep this game MA to create a giant hair demon that proceeds to devour the boss, no I did not make that up.

However after watching that I didn't feel the same sense of disappointment compared to DI's scene. The whole thing seemed to make sense in a weird way in the crazy world that is Bayonetta. The game is easily going for the crazy over the top setting seen in God Hand and of course Devil May Cry.

Overall having played both, I found myself enjoying Bayonetta more, the combat system was refined and it felt that I was contributing more to the combat then just mashing buttons. The game seems to be trying more than being a simple button masher and I'm interested to see how the upgrades and weapon unlocks will work. My only complaint about Bayonetta was that the controls did feel a bit awkward for me, but that could be from not playing an action game in awhile. My final point of discussion brings us back to the name of this entry and how the design philosophy seems to differ by culture.

Going back to one of my first points, even though both titles fall into the same genre, design wise they couldn't be further apart. DI is designed with the GoW mentally of action titles that I see primarily in US titles, and Bayonetta has the more subtle nuisance fighting that I see more in Japanese titles. Another aspect is on the concept of difficulty, while US titles seem to be easier then Japanese titles; I find that the Japanese ones are more balanced at the higher difficulty levels. Here is a quick draft I drew up to show my opinion: 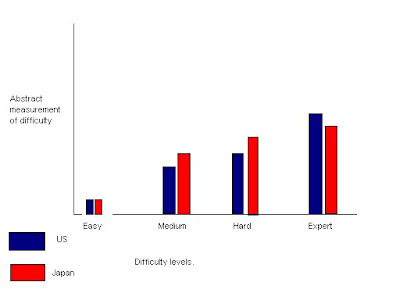 From what I've experienced in terms of difficulty games from Japan start out harder at earlier difficulty levels. For DMC3 the Japanese version's medium level was considered our Hard level which I tend to notice to be the case just in overall design. The reason why I say that our expert is harder than there is that by the time you are ready to play the game on expert you should have an understanding of all the mechanics. While most Japanese titles are harder starting out they have less of a difficulty spike as their games are more balanced I noticed. Playing games on expert from the US I notice a trend of just pumping up all the stats of the enemy to obscene levels instead of trying to create a balanced fight. This is why I enjoy Roguelikes for their massively difficult challenges, as even though they are hard they are also balanced.

While it's too early to tell about Dante's Inferno, Bayonetta has been getting rave reviews from Japanese magazines and I am interested to see how they will both fare once they are released in the US.