Alien Soldier is one of the best lovers around. It wants to be yours, but it kisses with a sandpaper tongue and its hugs break bones. It’s over-eager, too, so when the direct approach doesn’t work, you both sit down and try to figure each other out. You learn that Alien Soldier won’t do what you want to do, but you’ve heard the sex is so good you’ll do anything for those fabled moments of bliss. So you listen to Alien Soldier and discover what it likes and doesn’t like, punctually rubbing all its special spots just right until Alien Soldier holds you close—taking care not to crack your coccyx—and carries you both into climax. You do this over and over until you know every nook and cranny of Alien Soldier’s mind and body.

Alien Soldier is a harmless, perfect crime of passion. It’s a relationship your friends say isn’t healthy for you, but you’re confident they don't understand. It’s an on-off affair that you only get into when you’re in the mood.

But Alien Soldier is always ready for you.

The man most responsible for bringing Alien Soldier into the world, Hideyuki Suganami, confirms he wants people to talk about Alien Soldier with metaphors as ridiculous and embarrassingly heartfelt as I have:

“Alien Soldier is like my baby. No, strike that, it is my baby. And she’s very cute. It was a difficult birth. In the end we had to perform a dangerous C-section on the mother. So she’s a premature birth…”¹

Like me, Hideyuki Suganami cannot but help but get amorous for Alien Soldier. As he puts it:

“Alien Soldier. In the two years I worked on creating you, I never once tired of you. I’ve thrown my life away on the Mega Drive, and gambled it all on Alien Soldier. The only one who can love you because of, not in spite of, your various flaws is me. What, is it unbecoming of a developer to say all this? Well, I want to say what I want to say. Should I not put such things in my game? Can you trust the self-praise of the developer? Alien Soldier is mine. I don’t care if you believe me! Am I being… strange? Alien Soldier is my beloved, and I’m madly in love with her. Waking, sleeping, I only think of her… ‘Hey, who do you think you are?!’ Call me Nami-sama.”¹

Alien Soldier even has a specific gender for the occasion, allowing Suganami more comfort at the thought of having sex with a videogame.

You may have reservations about anyone comparing Alien Soldier to both a child and a lover. Well, no worries. It’s been over twenty-one years since Alien Soldier’s birth, so it’s okay at this point to talk about having sex with it.

Alien Soldier will always tell you their life story as you sit on the edge of the bed, holding hands. Their life seems to have been pretty traumatic—at one point they were kinda-sorta a little boy named Fou, but the girl they liked, Kaede, was kidnapped, so they fused with the good side of Epsilon-Eagle, a cosmic bird entity whose evil side is terrorizing the universe, but then an asshole named Xi-Tiger murdered Kaede —and you can't help but feel sorry for them.

If you tell Alien Soldier you don't want to hear their life story and would rather skip the whole thing, they don't hold it against you. Bygones are always bygones with Alien Soldier.

Make sure the lights are off when you’re with Alien Soldier, so the entire room is cast in a blue television glow. It’s at this point that Alien Soldier does this cute thing they like to show off: they will turn their back to you and take off their shirt, revealing an amazing tattoo of an exploding nebula stretching from shoulder to shoulder.

“This is my title screen,” Alien Soldier always whispers.

White, photoluminescent words flicker across the nebula on Alien Soldier’s back.

You tell Alien Soldier that they’re beautiful, that their sprites and action are as big and delicious as Shinobi 3’s. They say you’re beautiful, too.

“Are you ready?” Alien Soldier asks with a smile, their eyes glinting in the dark.

You go over your options first, trying to decide if you're Super Easy or just Super Hard right now.

Either way, you're ready to jump into it, but Alien Soldier lays down some ground rules first, saying you should practice movements, positions and try out their toys so you can ease into things.

You’re not entirely unfamiliar with Alien Soldier’s toys. The lancer, flamethrower and spread-gun are reminiscent of your lurid nights with Contra and Gunstar Heroes; the mechanics for walking on the ceiling evoke that wild weekend you had with Metal Storm several years ago. Alien Soldier can even hover in the air for you like Magneto in X-Men 2: Clone Wars would a few months later.

If anyone spent enough time with Alien Soldier, they’d know their toys aren’t really created equal when it comes to how much pleasure they give you. The only two toys you need to use are the flamethrower and the lancer, and you’ll never find yourself in a position where they’re not the optimal choice. You can carry only four toys, so doubling up on the flamethrower and lancer for even more voluptuous action is almost always the best way to go. For those who have trouble pleasing themselves and Alien Soldier without a little guiding hand, there is always the homing attack.

“VISUALSHOCK! SPEEDSHOCK! SOUNDSHOCK!”—the words on Alien Soldier’s title screen parallel a Japanese commercial that aired around the time of the Sega Mega Drive’s launch. As the three words are coined in the ad, a clip from Altered Beast shows a man transforming into a wolf, mirroring Xi-Tiger’s transformation atop the train in Alien Soldier.

The phrase 68000 Heart on Fire refers to how Hideyuki Suganami was intent on using Alien Soldier to push the Mega Drive’s Motorola 68000 microprocessor core to its limits. The ideal behind Alien Soldier is for the game to be a breakneck, finger-blistering audiovisual explosion of a side-scrolling shooter, a technical marvel that requires a skilled operator to make the bird fly.

Alien Soldier’s title screen communicates themes of pushing the Mega Drive and the player to their limits. The most powerful move in the player’s arsenal, Phoenix Force, exemplifies this best. Phoenix Force is a powered-up version of the regular teleport move, which causes the player to zip across the screen at high-speed. Phoenix Force is automatically used when the player teleports at full health, and using Phoenix Force always causes a drop in the game’s frame rate. This drop in frame rate is probably artificially produced, since Treasure’s designers loved forcing slowdown for dramatic effect, but using slowdown as an expression of the principles of an aesthetic reinforces the sentiments Hideyuki Suganami expresses on the title screen: The Mega Drive is being pushed to its limits.

The promise is kept. The Mega Drive and the player are both pushed to their limits; the Phoenix Force move is only usable when the player is at full health, and since Phoenix Force always drains health when used, skilled play is required in order to refill health and use the move again.

Alien Soldier is the only game I know of that communicates this way. It embodies a time and feeling about the Mega Drive in the late ’80s and early ’90s as videogames were moving into exciting new territory.

Nothing exhibits the values of this time quite like Alien Soldier—it’s a swan song to a dead era, and its developers did their damnedest to fork lightning. 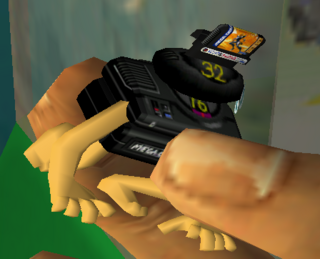 The rise of Sega’s slick black Mega Drive in 1988 was the first time you could call a videogame console sexy and confident and not feel too much like a tool. The makers of the Mega Drive knew it looked good, and stamped the phrases AV INTELLIGENT TERMINAL and HIGH GRADE MULTIPURPOSE USE inside the curve of a halo that surrounds its cartridge slot. Resting inside the halo like a crown of thorns is a reflective emboss that reads 16-BIT. Sega wrote the Bible on sexy videogames, and the Mega Drive was the Book of Genesis.