1P: the P is for Performer

Making games is an art form, but it's not the only art form to spawn from video games. Here is an argument that solo gaming is an artistic endeavour, which completes a game - in the same way a musician completes a written piece of music by playing it.
Travis Martin
Blogger
May 22, 2013

Video games are art. Of this, I am sure. I won’t argue that here. On the other hand, it has been said that the creation of a piece of art is but the beginning of its life. It’s your baby, but you have to let it go sooner or later; at this point, it belongs to the consumer evermore. In the case of video games, it goes a step further. A game is not finished until it is played. A shipped product is by no means a complete product. How can it be? Sit and watch your copy of Halo for a while, see if it entertains you.

One-player gaming (henceforth: 1P) is a performance art. 1P is the process by which a game’s text is transformed into the finished product: a played game.

Games aren’t alone. There have been plays and music as long as we have had stories to tell each other. Each of those art forms require multiple artists of different disciplines to cooperate to produce something listenable, watchable, playable.

Allow me to regale you with the similarities I see, as an actor AND a musician, between these art forms and 1P. Here, you’ll see the relationship between score and musician is nearly identical to that of .exe to Player 1. 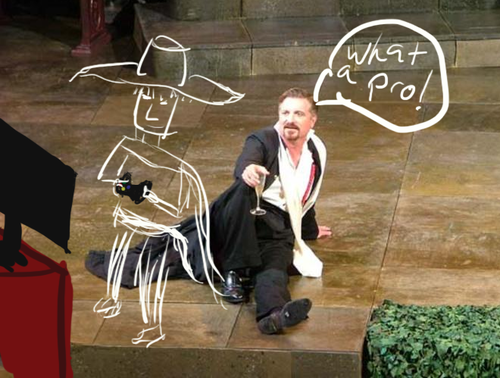 Exhibit A: If Vidja Games be the Food of Love, Play On

If you’ve ever begun playing an instrument, you know the feeling of looking at a piece for the first time, without having heard it. “Bah, what is this?” followed by a few minutes of looking at the notes, and deciding just to play it and see what happens. First, you play slowly. You’re still figuring out the notes. You play some wrong ones, and it sounds off. You learn, you adjust, try it again, and … yes! That’s it.

At first, it may look intimidating, but practice slowly, and you’ll get it. You begin playing it faster and faster, until eventually you know it like the back of your hand. Maybe at the end of the semester you’ll have a recital, and you can show off your skill as a final test.

If you’ve ever begun playing a video game, you know the feeling of looking at the levels for the first time, without having played it. “Bah, what is this?” followed by a few minutes of examining the platforms and enemies, and deciding just to play it and see what happens. You start in level 1, and it’s slow. You’re still figuring out the controls. You miss some jumps, and you die. You learn, you adjust, try it again, and … yes! That’s it.

At first, it may look intimidating, but keep playing, and you’ll get it. You’ll get better and better, until you know the controls like the back of your hand. Maybe at the end of the game you’ll fight the end boss, and you show off your skill as a final test. 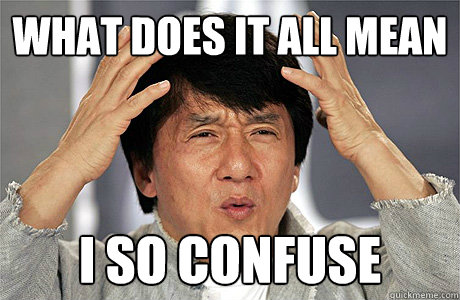 This demonstrates that, at least at the basic level, there are mechanical similarities between learning a piece of music and learning a game. Of course, you could take any activity and replace some words in this paragraph to describe skill development. It’s true! Very observant. Level up! Next:

When you are a master of your instrument, it’s because you’ve learned so much about it that it’s an extension of yourself. You’ve spent years studying the technique of great players before you. Now, you’ve reached a level of play that is no longer imitative of other people’s playing, but expressive of your own feelings. You are a true artist. Your music is an extension of your consciousness. You make decisions on tempo, dynamicsand phrasing that reflect the way you feel about the music, how you believe it should be played. These decisions are direct physical manifestations of your feelings. Perhaps the composer has written ff(fortissimo - very loud!) at a moment in the music you think inappropriate, and therefore eschew it. You will play mf (mezzoforte - kinda loudish), because that’s what you feel is necessary there.

This is identical in gaming. In Yoshi’s Island, the designers have laid out levels in much the same way Beethoven wrote music. Enemies are placed like notes, coins are placed like accents, safe spots are placed as rests. My interpretation of Yoshi’s Island requires a score of 100 in every level. It takes longer, but it’s my choice. It reflects my real-life patience, persistence, and passion for the game. Others value speed over completion. Collecting Red Coins will be much less important for this group, but that doesn’t make their choice any less valid. In fact, it’s expressive for them, and this difference is what makes 1P an artistic endeavour. To wrap up this segment, I will ask you to think of the character creation from Mass Effect. Now, consider this: in many concerti, the composer designates one section as a ‘cadenza’. The cadenza is an open invitation to the soloist to insert an invention of their own. There is frequently a ‘default’ written by the composer, but it is common practice for the soloist to rewrite it. This can make each performance of the concerto radically different from the next. There are restrictions - it should use the main theme, for instance, and it must be in the same key - but generally it is a big chance for the soloist to tell their own story. It informs the mood of the rest of the piece, which retains the same notes, but the cadenza will be remembered throughout the whole piece.

How is that different from Shepard?