In the next article of the series we describe the creative process behind one of the bosses from X-Morph: Defense. The Tarantula Mk V is the intro level boss. Being one of our first concepts it's surprising it's managed to crawl into the game.
Piotr Bomak
Blogger
June 06, 2018

A scene from the Tarantula Mk V’s in-game intro sequence.

In the previous article about boss battles we explained that not all our plans regarding X-Morph: Defense came to fruition. Even though it was not the first game we worked on, we did not manage to realize some of our concepts. One of the casualties was the mechanical scorpion boss, which only made it into concept art. Critically analyzing your own failures is important for your personal growth, but you must not forget about the things that went right. Today we will present to you an example of a boss battle which we managed to finish. It’s everyone’s favorite - the Tarantula Mk V.

CG animated version of the Tarantula Mk V walking through a city.

HALF THE NUMBER OF LEGS, DOUBLE THE DANGER

Originally named ‘four-leg mech’ (innovative, isn’t it?) the Tarantula Mk V is the first boss you encounter in the base version of X-Morph: Defense. The first level acts as a tutorial, easing the player into the game world and its mechanics. Therefore, the boss needed to be iconic and easy to defeat. After the aliens manage to tear through through the defensive efforts of surprised humans in South Africa, the machine is deployed as an ultimate weapon in order to stop the alien invasion. Since there are many more levels in our game we think you can guess how that ends.

One of the few possible ways to destroy the Tarantula Mk V.

The Tarantula was actually the first boss we used for testing the game and it can even be seen in the footage from the X-Morph prototype, although there are a lot of differences between that and the final version. The original Tarantula Mk V was a boss for a classic, scrolling, top-down shooter. It wasn’t supposed to walk around the level freely, therefore it only moved very slightly. The weapon system wasn’t sophisticated either, as we wanted it to follow a strict firing sequence, just like in other bullet hell kind of games.

Thus began the lengthy process of adapting the machine’s behavior to the tower defense style of gameplay. Luckily, as we already learned, the visual design is the shorter part of the process, so we already had high-quality assets we could use. We ended up featuring them on both the old and new versions of the concept art and in the CG announcement trailer. 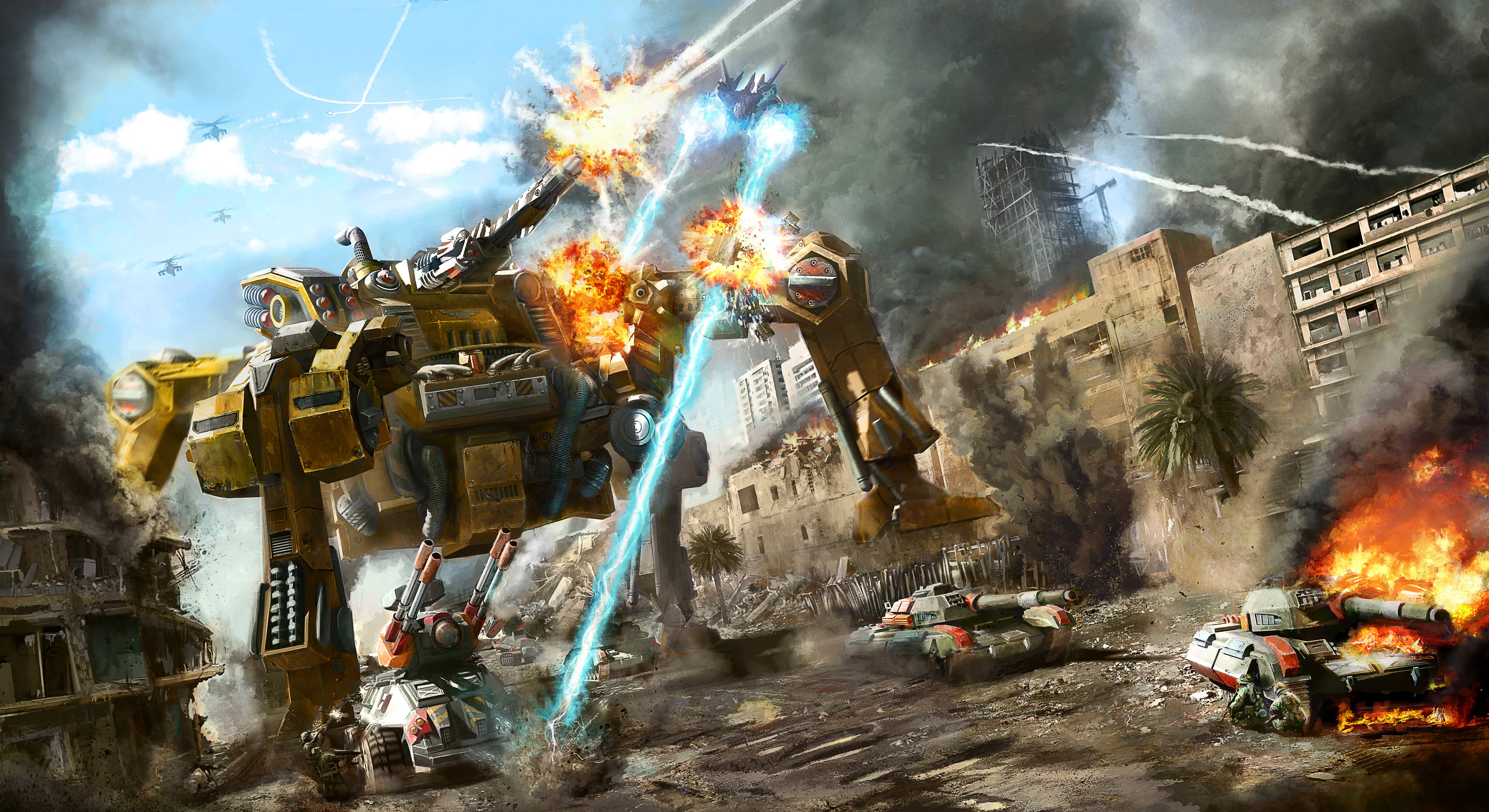 As the player launches our game for the first time it is important to establish some sort of expectations for the rest of their time with the game. X-Morph: Defense is not a simplistic shoot’em up. There is a lot more depth to it and the scope of operations is more akin to blockbuster movies rather than arcade classics. Had we simply put the boss on the map out of nowhere, the general atmosphere would have taken a huge hit. You can’t destroy the whole planet in the prologue of the game, however, so we had to limit our destructive drives and come up with something which was both exciting and reasonable.

From the very beginning of our project, we were aiming for a spectacular, cinematic style of presentation. Both the graphics and music were supposed to emphasize the epic scope of the game. Following this line of thought, we wanted to introduce the Tarantula Mk V to the player through a cinematic intro sequence. A classic story board was made for that purpose, and we later followed with production. The in-game version of the boss intro sequence was over 2 minutes, which was way too long. On top of that we didn’t have a system for rewinding cinematics at that time, so after not long the entire team hated waiting through this sequences over and over again. As a result, we decided to remove the entire intro sequence and to re-make it at a later date. 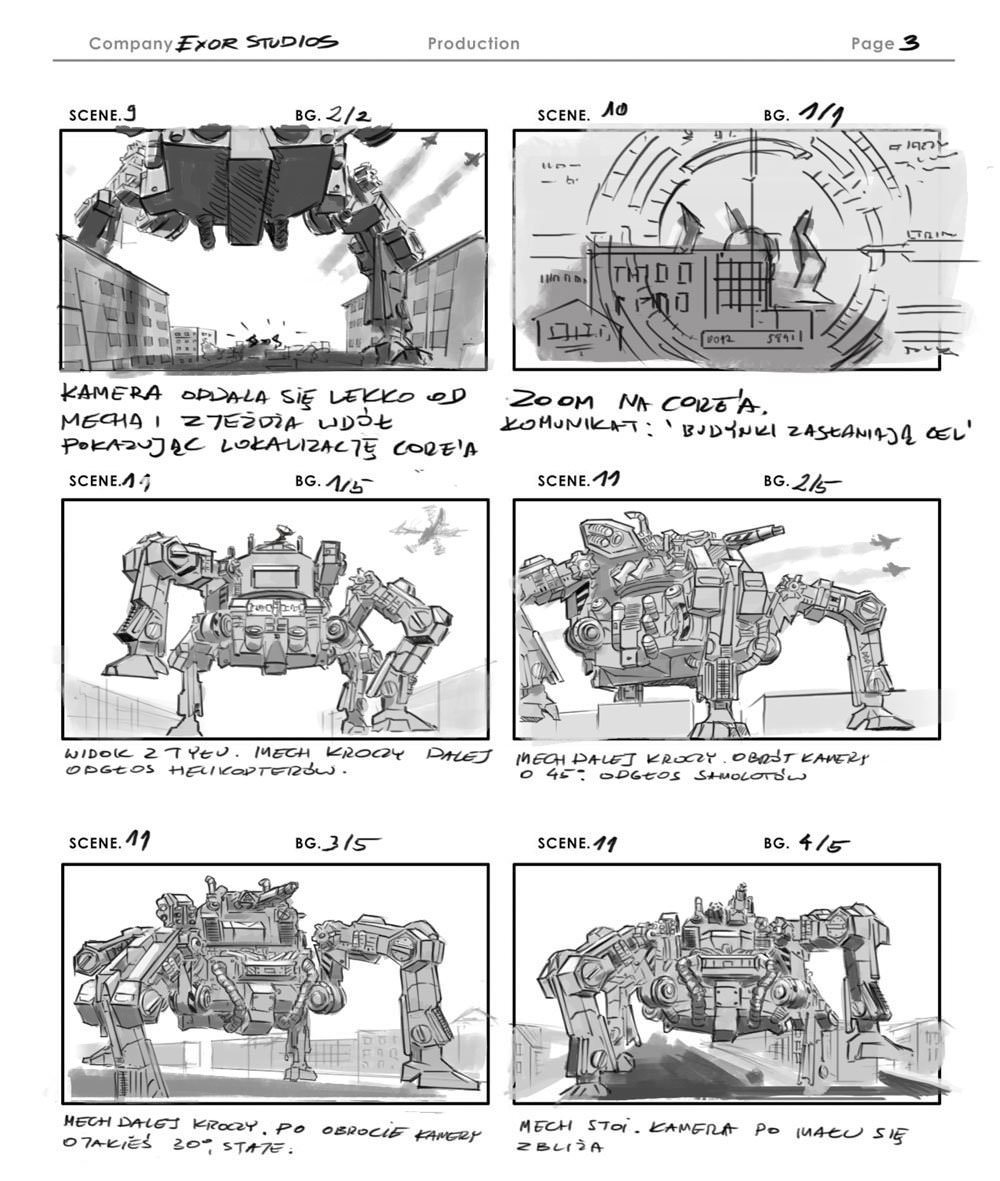 A fragment of the Tarantula Mk V intro sequence storyboard.

Not only the intro cinematic was revised. After making the whole first level and testing it a number of problems emerged. First of all - people picking the game up for the first time had trouble completing it. If someone accidentally dies during the tutorial because of their mistake that’s fine, but we had a bigger problem on our hands. Even after several attempts, the level was still too tough. Furthermore, if somebody managed to get through the initial waves of enemies the boss fight seemed too easy. Rather than redesign the existing level we made the decision to prepare a completely new map. 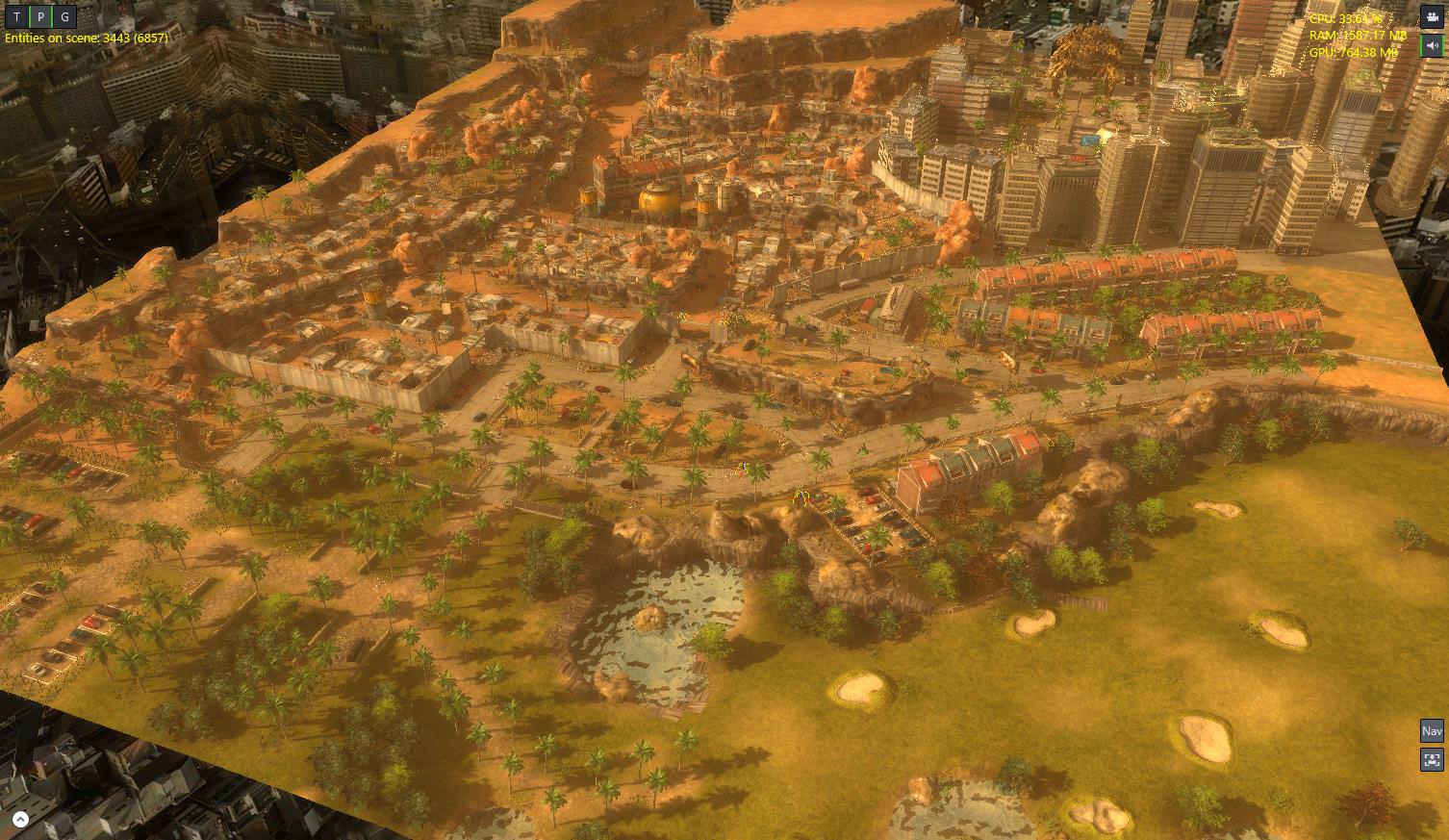 The initial version of the South Africa level. The X-Morph were supposed to land on a golf field situated right next to a slum district.

FIRE IN THE HOLE

The Tarantula Mk V is the simplest boss in X-Morph: Defense but it’s by no means simplistic. All the legs of this abomination are independent systems, the player can both damage and be damaged by them individually. The spider’s body itself has 4 weapon systems, able to operate on their own and again, be disabled by the player. It’s worth mentioning at this point that we have simplified the Tarantula’s structure. Originally there were many more individual elements, but we decide to merge them for the sake of better gameplay. 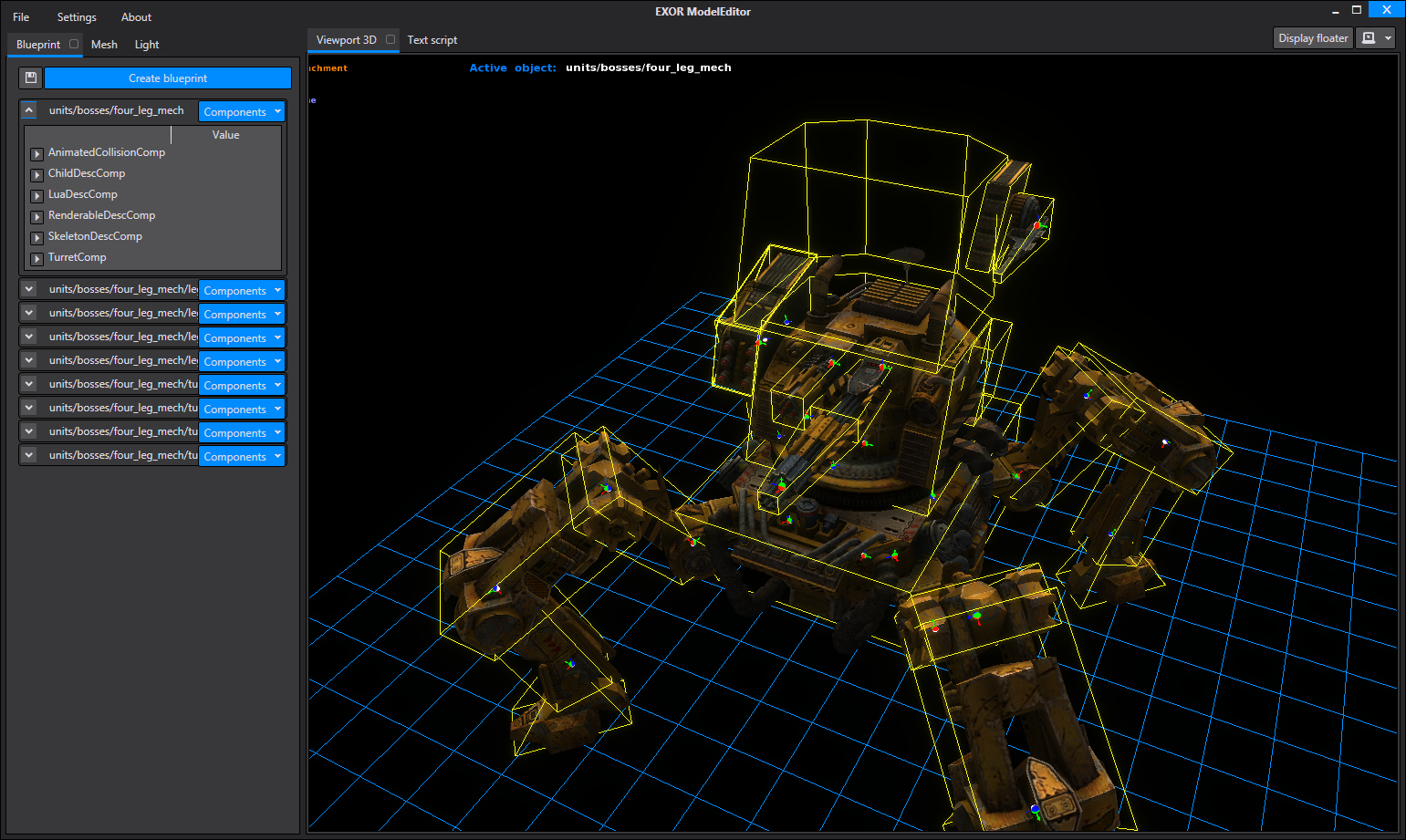 Boss collision meshes are attached to its skeleton and animate along with its movement. Glitches in an animation can also displace physical collisions as pictured above.

The textures on the Tarantula represent the amount of damage it has taken, changing dynamically as the player shoots it. Not only the textures change - as the legs or weapon systems take damage, they spawn scraps and debris, making the battle look more realistic. That alone is a lot of work. There are over 500 individual objects, comprising the body of the boss. All of them have both the graphical and physical representations. As individual sections of the Tarantula’s body get damaged, it’s possible to see the damage, the debris and feel the power of the alien ship. It’s all possible thanks to a special set of hitboxes you can see below. They allow us to calculate screen space collisions of player weapons. Screen space collisions are a special gameplay trick that we use to make the player’s life easier. Instead of calculating if a bullet has hit an object in 3D space we check if the bullet is overlapping a hitbox on the game’s screen. This way you don’t have to worry if you shoot over or under an enemy because the hit will register whenever these objects overlap on the screen. That being said, we use this system very selectively, such calculations happen only between the player’s weapons vs all enemies. Thanks to this system shooting always feels “right”. 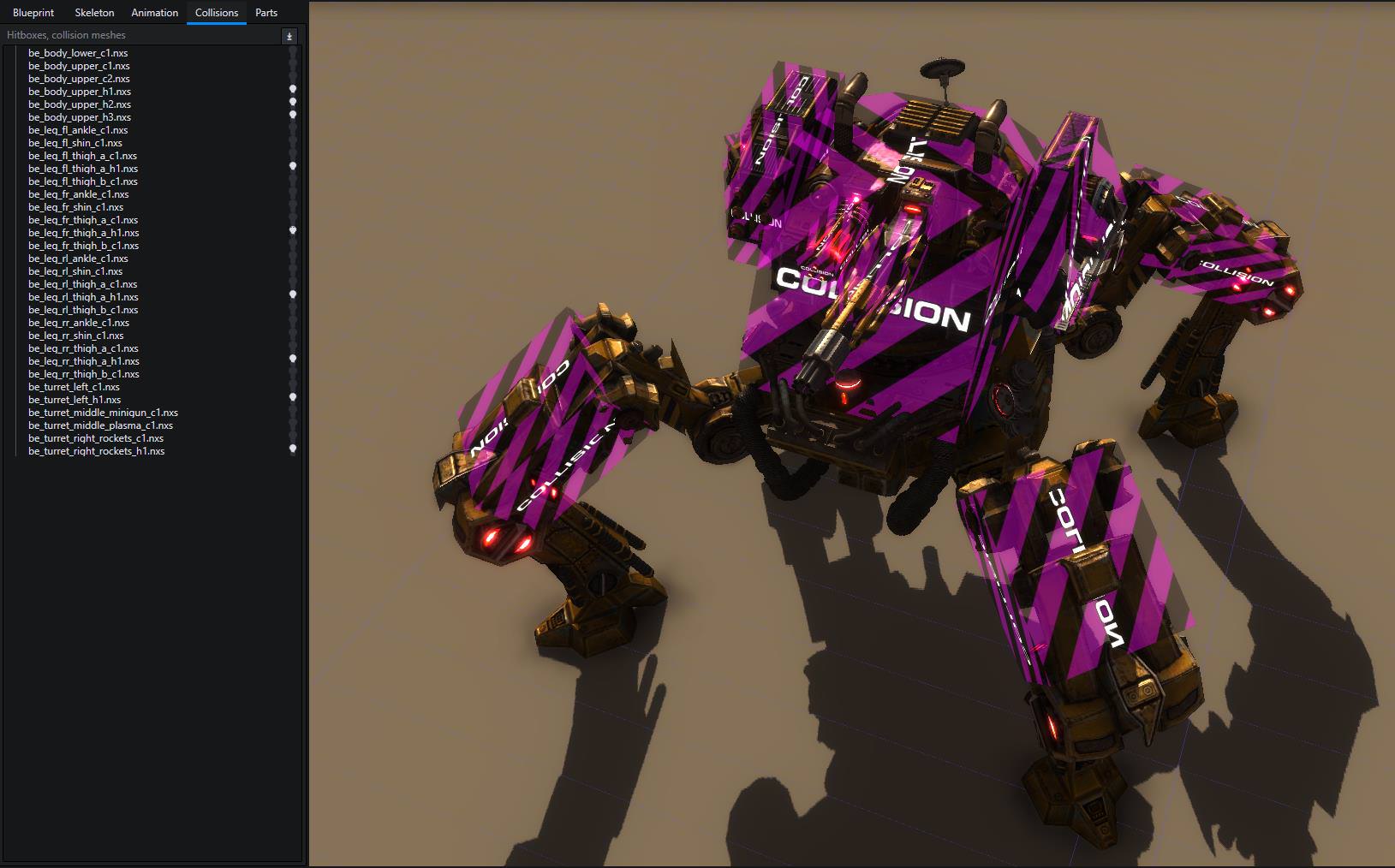 Tarantula Mk V’s hitboxes envelop its most important parts, that can be destroyed by the player.

What we enjoy the most, however, is blowing things up. Therefore, every destroyed part triggers an effective sequence of explosions, comprised of several particle effects, carefully modeled by hand after real-life examples. As a fun fact we can tell you that there are 214 explosions comprising all of the boss’s parts’ destruction sequences. The boss itself can be taken down in two different ways - by destroying the legs or the main hull - and each of those leads to the epic end animation, taking down a great part of the city in the process.

As we mentioned already, every part of the Tarantula Mk V is an amalgam of smaller parts, each with their individual characteristics, making the machine whole. Everything about the boss is scripted individually - its behavior towards the player, finding the path to the alien core, even the reactions to the destruction of its individual parts. With the destruction of each system on the Tarantula, an individual event is triggered, complete with a dialogue line (translated into 13 languages) and an English voiceover.

Tarantula Mk VI - a tougher version of the same boss makes a re-appearance in the Nigeria level.

All in all, after we finished implementing all of the systems that we wanted to have for this boss, it turned out to be much more time-consuming than we expected it to be. The visual representation is only a fraction of the necessary work. This made us reconsider the number of bosses in the game. Starting from 11 designs, we finished at only 4 in the main game and 1 in the DLC. Each of those has its own story and individual problems, and we will try to tell you about them in future articles.

Until the next time,
EXOR Studios