Working with Intellectual Property: It's Freakin' Sweet, I Tell Ya H'what

Intellectual properties can be a wonderful addition to a game -- once everything is approved! This article discusses the process of working with 5 (!!) different IP holders for Kongregate's "Animation Throwdown: The Quest for Cards."
Katrina Wolfe
Blogger
July 11, 2017

Over the last 7 years I’ve worked on a variety of Facebook and mobile games; a handful of them were with different celebrities and intellectual properties (IPs). I've been working on Animation Throwdown: The Quest for Cards at Kongregate for the past two years. I joined during pre-production, saw it through launch, and continue to support it through live servicing. Animation Throwdown is a card-battling game that incorporates the worlds of 5 animated properties from Fox: Family Guy, American Dad, Futurama, Bob's Burgers, and King of the Hill. Before Kongregate, I was a producer on Family Guy: The Quest for Stuff at TinyCo. Before that, I worked as a designer and producer on a variety of projects with celebrities and brands at Grab Games: Baby and Me (working with Brooke Burke and ModernMom.com), Brad Paisley World for Facebook, and a few other games that were never released.

First of all, these projects are partnerships. You get to work on amazing properties that have a fan base who cares deeply about that property and, if you’re lucky, you also get to work with the creators. For Animation Throwdown it was incredible working with five different shows. We got to sit down with the different show runners to talk story, gameplay, and figure out how to bring all the worlds together. Each group participated in different ways, but I would definitely encourage anyone who works with an IP to get creators/show runners/etc. involved in some form. It can help make a game that’s more authentic and really speaks to the fans.

For Animation Throwdown our day-to-day interactions were primarily with Fox, but many of our conversations (especially early on when deciding how to bring all the shows together) included the creators and/or the show runners for each show. They helped us craft our introduction story and pick our launch cards, islands, and characters. One of the bigger challenges we faced was providing players with content that is fun and special to each show without alienating fans from a different show. We were always a little worried that inside jokes might not connect with the fans of the other shows and struggled to know what that balance was. Working with the shows helped, but even then it was hard to please everyone. We ended up starting with more well-known parts from each show, and now, in live servicing, we are digging deeper into each show.

Working with the creators/license holders/stakeholders is valuable, but it’s also important to have a vision holder who can take everything and bring it together to deliver a cohesive final piece. Don’t forget that this is your game, your vision. The creators/license holders/etc. can be a great influence, but it’s the developer's job to ensure that you end up with a good game and not get lost in their ideas. Take their ideas and determine if they meld with the game well. In the beginning, some of the stakeholders suggested we craft specific narratives for each show that the players could then choose to interact with. It was an interesting idea, but it was also both technically challenging and added a lot of complication to the Adventure mode, which would have probably ended up more confusing than fun. We spent quite a bit of time trying to make ideas like that one work because we thought their ideas were concrete directions rather than just suggestions. We ended up scrapping a chunk of the game narrative because it didn’t quite work for anyone, then we pitched an idea we liked that was simpler, funnier, and more thematic. It’s a difficult balance, but that’s why remembering it’s also a partnership is important. The developers bring the vision for the game experience and then work with the creators/stakeholders to keep it authentic. 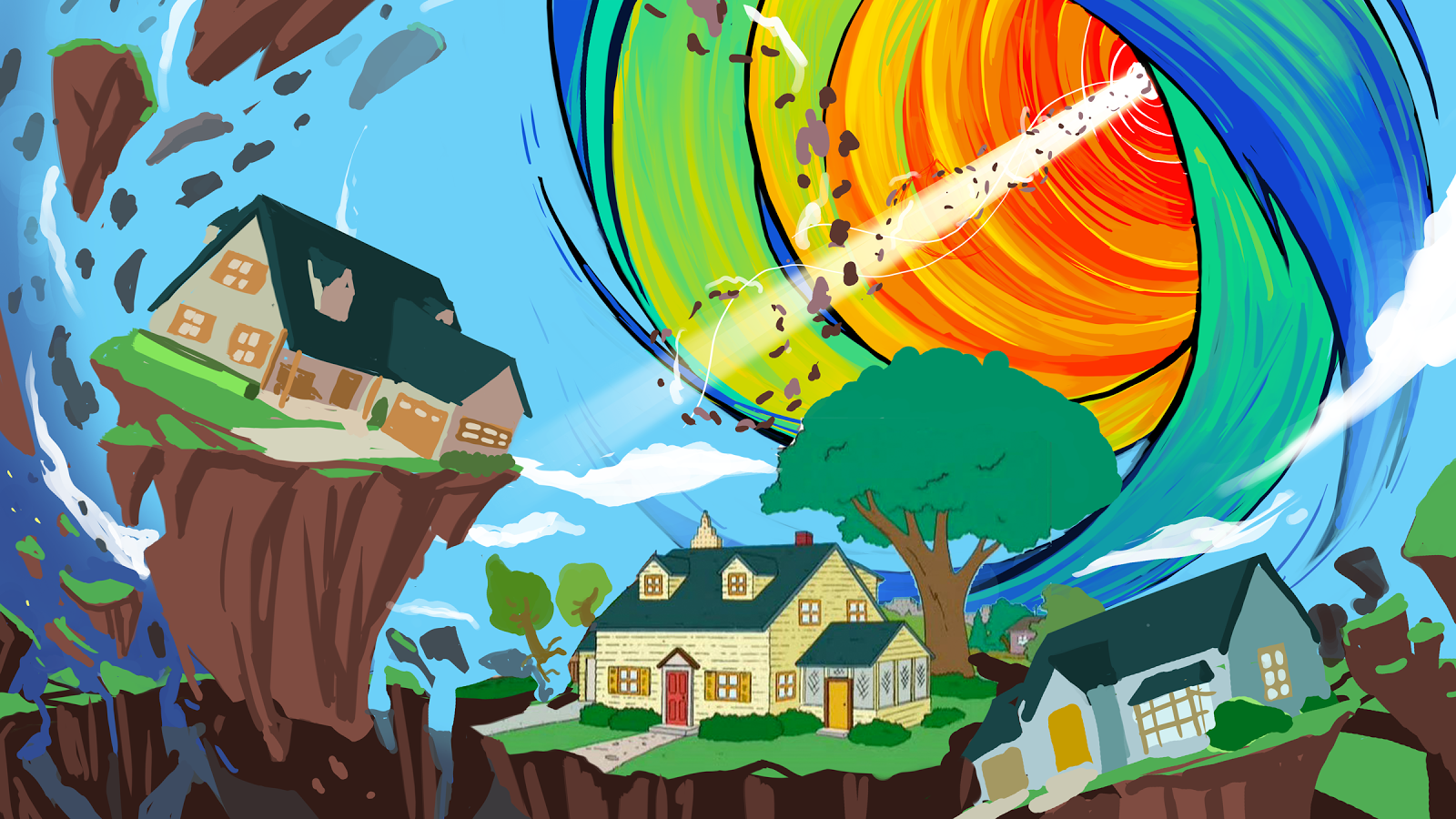 The story we were working with for a long time was this vortex concept. All the different show worlds were sucked into a mysterious vortex. There were some really cool visuals for it, but it never felt quite right.

If you have an idea, don’t fear pitching it. We occasionally had internal conversations about game ideas or marketing ideas that we sometimes didn’t follow through on since we were worried it would be hard to approve or that the shows might not be willing. Out of almost everything we did bring to them, we found a way to do what we wanted.

This bit is more specific to animated shows, but asking for and collecting any resources available to use from the property will be helpful.

Animated shows can have lots of references and model sheets, but many don’t keep all their model sheets 100% up to date (do you have game documentation that is always perfectly up to date?), so don’t expect to be able to trace something and have it approved immediately. Older shows like King of the Hill and Futurama had lots of scanned model sheets that they were able to send us. It was a really useful starting point; for the characters/buildings/etc. that we didn’t get references for, the artists just had to grab screenshots from the shows and work from there. For celebrities and live action it’s a bit easier since the art style will be the one you created, and you only need to match the person to the style.

The small details matter. Getting to work with the shows is what takes the art in game from fan art to brand art. Getting characters on model, using the correct colors -- all of those things might seem like tiny differences, but they are what defines the brand. Especially for animated properties, where you’re matching the art style, all of the show content will generally need to be sent for approval. This can mean sending art to the show’s artists to get redlines and make sure our drawings are matching their models and their standards, or this can be sending your rendition of a real person to them to make sure that it represents them in a way they like. For example, on Family Guy: The Quest for Stuff we would work with celebrities to get them in game and sent over our renditions of them to both the Family Guy team and the celebrity for approval. Family Guy’s team would make sure our rendition of the person was on brand and the person would make sure that they were happy with our representation of them.

To give an idea of the type of approvals we got in Animation Throwdown, here are some example redlines we received: 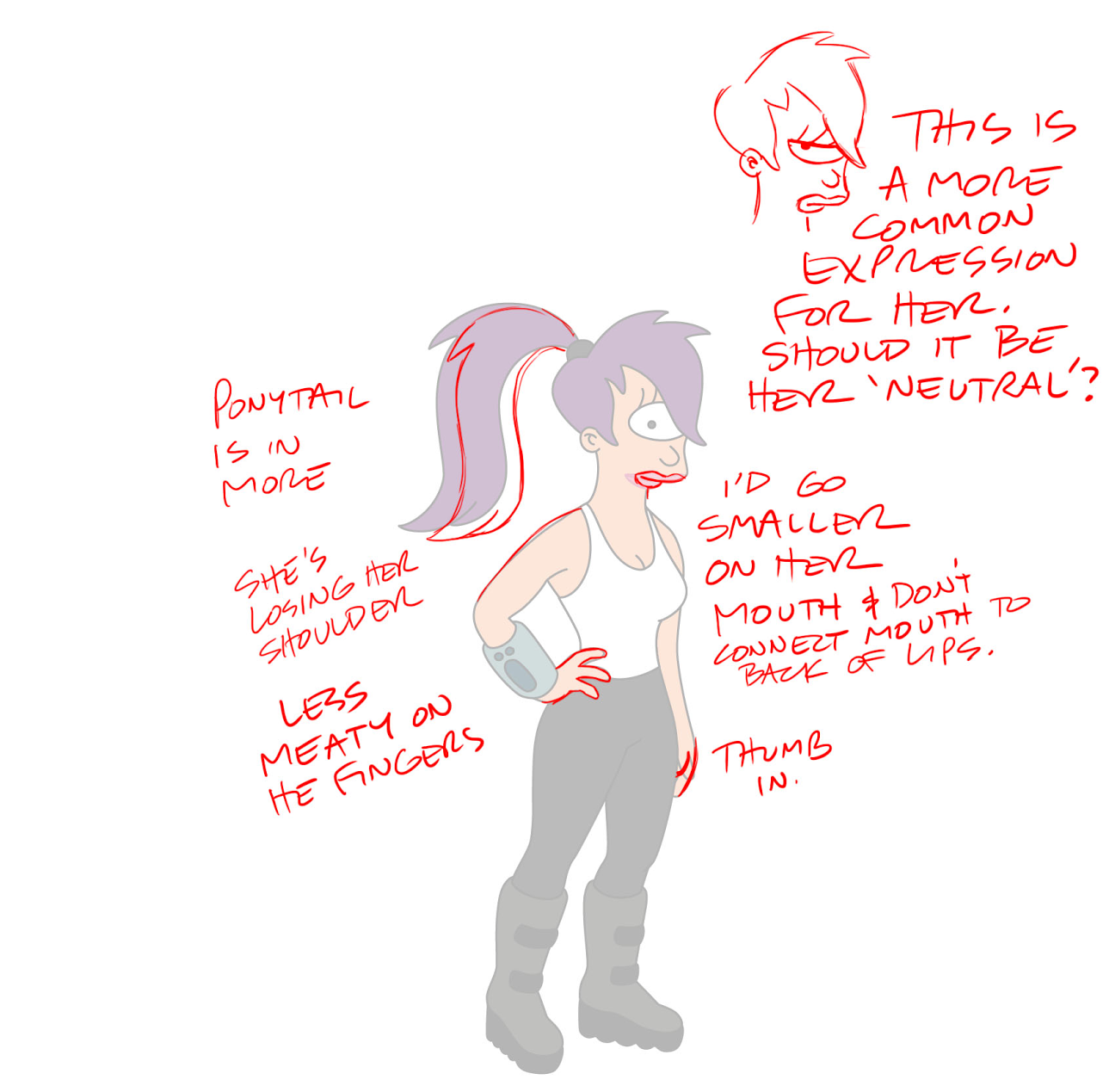 Redlines for Leela -- a lot of the redlines we would get had this level of feedback. They sometimes comment on the pose itself but often would just take what we wanted and make sure the details were on model. 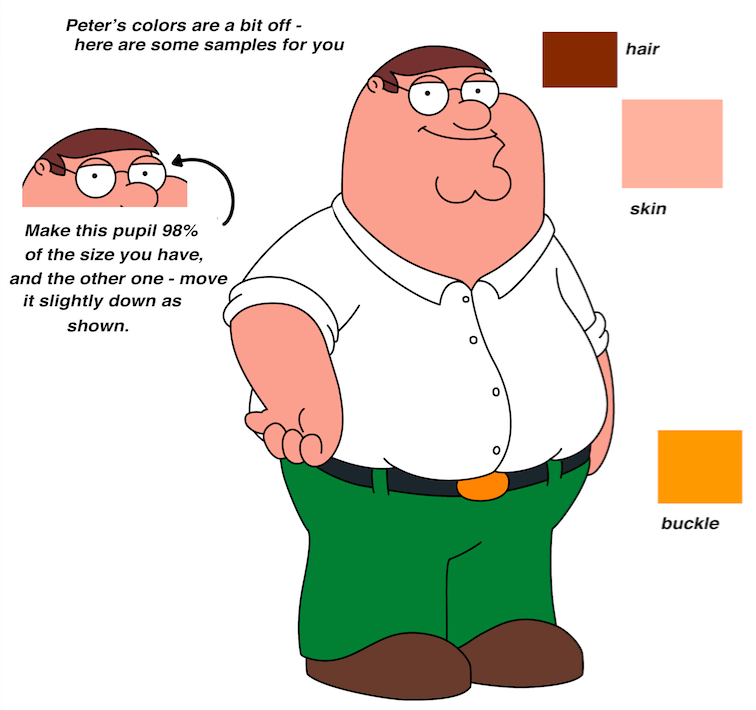 We got this with our first submission of Peter Griffin. These details are small and can be hard to notice at game size but regardless are important to follow to be on brand. 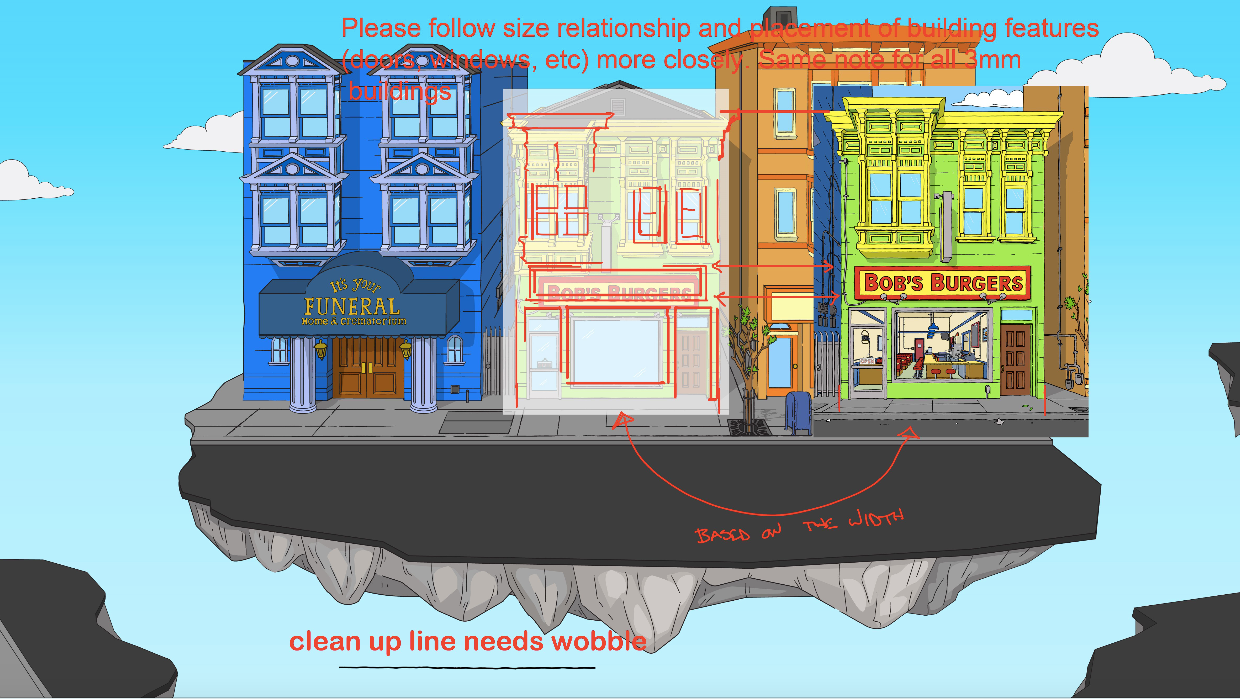 Bob’s Burger’s house -- this took us quite a few iterations, since it was one of the first Bob’s Island we made. We didn’t have the line wobble down, and the reference material we got was in a slightly different perspective, so it required quite a few tries to get the exact size of the building.

When there are multiple artists working on a project, make sure they have access to (and understand) previous notes and apply those notes to each subsequent piece. It will make the process go significantly faster, since you don’t want to waste a round of approvals on changes you already knew needed to be applied. This can lead to frustration both by the IP owners and the artists.

When we started working on Animation Throwdown, we didn’t know what the shows were going to comment on, so our early art submissions took quite a while (weeks) to get approved. Once we understood the rules and internally tried to hit their quality bar, everything went much faster. We now have many assets that go through 0-1 reviews before they are approved.

One thing that is very helpful when getting lots of assets approved is fastidious status tracking. We have assets at all different stages of approval, including different types of assets (card, characters, etc.). I have spreadsheets galore to keep track of all the assets we’ve gotten approved, and we’ve created processes for all our artists to ensure that we know which pieces are approved and can be used. This was extra important for our team, since we had lots of different parties all trying to use the same assets, and releasing unapproved assets is not something you want to do. However, the sheer volume of assets alone required significant tracking to make sure everything was moving through the process and didn’t get left behind. We’ve gotten almost 1000 cards approved, over 250 characters and poses, more than 100 boxes and banners, 35 islands, and all sorts of other bits and pieces!

During pre-production, we spent so much time creating all the base assets that we weren’t able to get ahead and create art for future events. Game development moves fast, and oftentimes we’ll come up with a plan and want to ship it immediately but get slowed down because approvals are time-consuming. Right after launch we were prepared for the first event (we release new cards weekly that have a specific theme which are boosted in battle for the duration of the event) and had started preparation for the second, but approvals can have a 1- to 2-week turnaround time for assets, so we had a lot of approvals that came in last-minute. This caused a lot of stress when preparing server pushes because we would be uploading and testing assets very close to when we wanted to release them. Now we’re ahead, and we start creating cards ~2 months in advance. We had to get better at planning ahead, anticipating the work, and building in buffer time for everything.

On Animation Throwdown, there was more complexity since we had 5 shows. Content that involved multiple shows' art had to go to all of those studios for approval. Occasionally, one show’s notes would impact the design/composition of another show’s character -- this required even more back and forth than with just one show.

Working with different properties can be a wonderful addition to a game. It allows for players to immediately connect with your world in a powerful way. That connection helps with user acquisition (brand recognition = lower CPIs) and can positively impact KPIs. Depending on the property it can add to production times, but with a little preparation and good processes, it’s a challenge worth tackling.

Katrina Wolfe is neither cat nor wolf. She's a Producer at Kongregate and has significantly influenced the growth of Animation Throwdown. A Californian who loves games, good wine, and of course, cats.