Second Life needs new players, Oculus Rift needs a social nexus. Facebook could monetize our second life as well as using it as a unified portal to other games.
Nick Harris
Blogger
March 26, 2014

Myspace, Bebo... many social networks are fashionable for a time, become mainstream and then fall out of popularity with the bright young things that discovered them and drove their initial growth, attracted by the next new "shiny", pulled along by peer-pressure to be "where all the cool kids hang out" and avoiding contact with a generation that they feel has never understood them and that they resent having crashed their party. It seems blunt to put it this way, but everything seems bleeding-edge until your family reminds you to "poke Grandma":

Given that everything is merely a click away (or should I say, a tap away...am I not showing my advanced age by using moribund terminology in a mobile age?), megacorporations are right to fear the ease with which customers can leave the party they are hosting in search of a more fashionable venue. Facebook have tried to retain its dominance through simple critical mass, if that is where everyone is, if you have to join Facebook to not miss out on invites to your friend's impromptu parties then their hope is that you will and you won't mind the data mining they do on you for market research and the targeted advertising. You aren't in a position to complain, really, as it is a service they are providing to you for free.

Alternatively, you could use Google+ and benefit from its ability to separate everyone you know into a set of 'circles': job contacts, work associates, friends and family - yet, despite its superior technology, it lacks enough users to pull people en masse away from the black hole that is Facebook.

Unsurprisingly, Mark Zuckerberg bought a rapidly growing cross-platform mobile instant message service at a cost of around $10 per member. Even if thousands leave in disgust for some other service its growth is unlikely to plateau and the $19,000,000,000 he has spent on WhatsApp will seem more sensible as it ensures hip relevance with the cool kids and their disposable incomes (twentysomething, no mortgage burden and no children to pay for). To put things in perspective, Facebook is worth $161,860,000,000.


This is really a new communication platform. By feeling truly present, you can share unbounded spaces and experiences with the people in your life. Imagine sharing not just moments with your friends online, but entire experiences and adventures.

There has been a lot of... internet speculation... that this bodes ill for what was once a promising platform with the overwhelming majority of gaming fora stuffed full of hateful messages and regrets that they paid for a development kit (which still works fine, by the way). Despite the fact that Kickstarter pledges aren't equivalent to stock in the company, people have been making out that they were cheated even though it is quite common for a Kickstarter to fail to deliver on any of its promises. Before a rift forms between the once claimed savior of PC gaming and the gaming public that was so hyped about its future potential by magazine covers like this: ...we should be reassured by this part of Zuckerberg's statement:


Oculus already has big plans [for immersive gaming] that won't be changing and we hope to accelerate. The Rift is highly anticipated by the gaming community, and there's a lot of interest from developers in building for this platform. We're going to focus on helping Oculus build out their product and develop partnerships to support more games. Oculus will continue operating independently within Facebook to achieve this.

Now we won't be getting Minecraft, but I can envision its coarse pixels making my eyes bleed in VR:

On the other hand CCP are still committed to bringing EVE: Valkyrie which looks to be more appropriate:

Indeed, CCP could eventually bring Incarna, Dust 514 and their popular Online MMO onto the Oculus as one unified interstellar experience. However, I feel that there is a more obvious affinity between another online open world that has been around since 2003:

Not only is this primarily a social nexus like Facebook (a place where you can project whatever version of yourself you choose others to see, either using a younger image of yourself, or making an effort to dress up for the photo when you are actually a slob in real life, or use someone else's image entirely out of low esteem, or some catfish scam), but you are encouraged to create an escapist alter ego through which to indulge your fantasies, to travel without time, cost, or hassle to "see the sights", to meet new people who share your interests unrestricted by enormous geographical separation.

Yet, just as in life your vanity will compel you to seek your desired appearance as you are aware of how others judge you based solely on first impressions, so you visit one of the many shops which sell clothes, or shoes and get a new hairstyle: 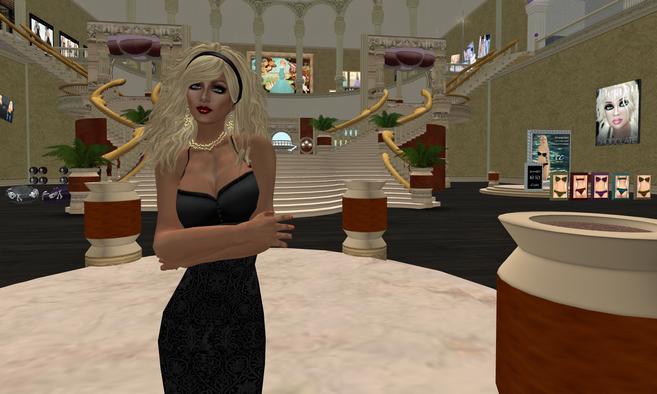 Linden Lab is a private company, but for the right mix of cash and stock they would be wise to allow their world to be sold to Zuckerberg and given past estimates of their worth, there is no question he could not afford it. This would not necessarily precipitate annoying advertising everywhere you look. Google puts a few sponsored links in with its search results and you can just blithely ignore them, similarly you leave a player to go to the shoe shop of their choice and be persuaded therein, or simply remark on how you like another avatar's shoes and instantly find out where they got them from and be able to get them yourself before your impulsive purchase was dampened down by the onerous business of travelling there as you would find would be the case in real life:

"Yes, I bought it last year whilst on holiday in Venice"

"Hmmm... can you remember the name of the shop, maybe I can order it online?"

Facebook could monetize our second life as well as using it as a unified portal to other games.