Why did we decide to develop Permia - Duels II?

This article was originally published on the official blog for Permia - Duels II in March 2016.

This article describes the background of and our making decision making process on starting the development of collectible-card game Permia - Duels II.

Sometimes choosing the path reminds me about Matrix... Except in our case there are hundreds of pills to choose from!

Primary purpose of describing the decision making process is to offer honest self-reflection so that other game developers could possibly learn something from that and advance their own decision making. Secondary purpose is to get feedback from more advanced guys from the industry so that we also could learn and develop our processes.

Permia - Duels II is a sequel to collectible-card game Permia - Duels which was originally published on Windows platform in 2013. The game was inspired by Triple Triad minigame from Final Fantasy VIII.

The short description of the game is that each player has in their hands six cards which are depicted as hexagonal shapes. On each side of the hexagon, there is a number representing the power of that unit on that side. Players place their units in turns to the battlefield. The goal of the battle is to win the opponent by capturing opponents cards. Cards are captured by placing a unit with greater number on the side next to opponent's card. When all cards are placed on battlefield, the player with more cards on the battlefield is the winner.

As you can see from the short trailer video of the original Permia - Duels below, the game is quite niché. It is far, far away from the casual puzzlers like Candy Crush Saga. Still, the game is quite easy to learn, the basic rules of the game is easy to comprehend and battles are very quick for a card battler (3-4 mins typically) yet offering meaningful tactical brain exercise and the pleasure of occasionally winning fellow players on the other side of the battlefield.

We worked closely with Microsoft during the development and release time of the game via their AppCampus partnership program whose purpose was to get good developers to develop apps and game onto Windows Phone platform. We got ok results from Windows platform due to AppCampus partnership and because at the time there was a lack of good card battlers on the platform and we got nice featuring placements from Microsoft. 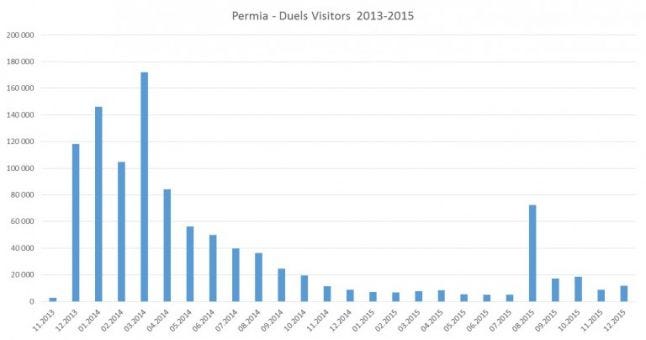 On summer 2015, we decided to publish the game on iOS App Store to test out how the game could get a traction on Apple's platform. It didn't, as you can see from the chart below.

So why we decided to do a sequel to Permia - Duels?

First, there were few considerable causes which hindered Permia - Duels financial performance which I summarize below.

HTML5 support of animations and other visual stuff

HTML5 isn't very good tool to present animations, particle effects or other neat visual effects that would allow us to increase visual polish of the game which is required in current mobile gaming landscape. This reduces our chances to get players stick in our game during those important first 10 seconds

Another big reason is that HTML5 performance on Android and iOS still very very bad, at least on our experience. Sure, Apple's WKWebView has increased the performance of traditional HTML5 and hybrid apps but that doesn't translate very well to mobile games where you need to handle a lot of animations, particle effects and real-time counting of these things. This considerably affects our maximum addressable market size which is one of the primary variables which we as a F2P game developer and publisher need to worry about. Even if with such a core gaming experience as Permia - Duels, we still need to make sure that all possible gamers could get to play the game, even theoretically.

Despite poor technical performance, the game was getting traction on key target markets

Third reason why we believe that we have chances with Permia - Duels II is that the original Permia - Duels was doing ok in key target markets in west despite not having good enough animations and poor performance on some of the target devices. By doing ok I mean that it has got decent number of downloads without any paid advertising and also that the retention of the game in target markets (Germany, UK, France) is OK for mid-core game (D1 around 30%, D7: 15% and D30: 5%).

This data tells us that the value-proposition of the game which we describe in the product page is interesting enough for the potential players to download it. Also, the game itself is decent enough (albeit some very clear drawbacks in PD-I) that 5% of all players play the game after 30 days.

The value proposition is still quite unique

The value proposition of Permia - Duels is clear: it offers quick PvP battles combined with meaningful tactical challenges for players. It's chess on steroids.

At the time when we made the decision to start the development of Permia - Duels II (November 2015) we couldn't find any other game that would offer same kind of depth combined with the speed of the battles we have. Of course all that changed when Supercell published Clash Royale.

Despite the king of mobile releasing similar game to market before us, we have different enough gaming experience with PD-II that allows to peel decent revenues from the market.

We have researched the market space extensively with tools such as App Annie, Priori Data and Gamerefinery and all of our findings confirm that there is enough players for high-quality card-battler games that f2p business model for our game would make sense. CCG space is not (yet) filled up with games that sound and taste  similar to each other so that it would hurt the genre overall. I think that has happened in town battler games already.

On the flip side, even if the game would be a total flop, we are  able to keep the company alive and survive to fight another battle. Sure, there would be sunk costs and opportunity costs but for us at this time, this the best course of action we could honestly take.