Why Diablo 3 Shut Down The Auction House

A huge announcement was made yesterday for Diablo 3 fans. Blizzard has (finally?) decided to shut down BOTH the Gold Auction House (GAH) and Real Money Auction House (RMAH).

The official announcement is available here:

While the sudden announcement has the community chattering about the relevancy of the AH system, most people (including myself) see this as a boon to this game and simply wonder why this wasn’t done sooner ?

Having a medium for players to trade and making there lives easier is great. However, Blizzard made a few huge mistakes while creating Diablo 3 and it seems that they are pretty much trying to reset the game when the expansion, Reaper of Souls, comes out.

I am going to cover a few topics here which should illustrate where Blizzard went wrong and how they are trying to fix it now.

To give you my background, I have played for about 500 hours, mostly as a Barbarian. You can check out my profile here:

I was a avid D2 player and played it for over 8 years. I was very excited for D3 to come out. I upgraded my , bought some D3 swag and went through every pre-release video and post made by Blizzard since 2011. I even attended the Midnight Launch to get my copy of D3 as soon as possible.

The D3  performed horribly in the first 2 months of release. I didn’t mind that they crashed in the first one or two days. What I minded was that for almost 2 months, I couldn’t have a seamless game experience. And thats why I am still scared to play the Hardcore mode to date (wherein Death is permanent).

I went through the Book of Cain before the launch and this is the first game that really immersed me in its Lore. I think they have done a great job with the story with the exception of them killing off the main character of the series – Deckard Cain.

When I played D3 for the first time, I was wowed by the Graphics. Not only were they sharp, but I loved the intricate details in every level. My favorite has to be the Tower of the Damned in Act 3. The height and the monsters in the background are fascinating to watch. It says a lot of about the graphics as I stopped many a time in the middle of a run, just for a few seconds , to gaze at the background art. And also the haunting music at the . Every time I hear it, I can’t help but get pumped up to play the game. However, I would like to give a shout out to DarkD3 which makes the game even more eerie and cool than it is. Sadly, its against Blizzards Terms of Service and can get you banned.

At release, the difficulty was pretty good IMHO. The DPS (Damage per Second) vs. HP (Health Points) was quite skewed towards ranged characters as they stayed out of damage traits such as Electrified, Molten, Plagued and obviously Melee. Hence, as a Barb I had way more HP and resists and very little DPS. So the Barb became more of a Tank than a Melee character.

Inferno really was, as Blizzard called it “very, very, very hard”. However, this let me really enjoy getting through Act 1 and I was so excited to finally see the so called crazy Act 2 and its difficulty. The point is that there was a challenge worth conquering.

Then they nerfed Inferno into oblivion. It became super easy and with the new legendaries later on, it made sense only to farm Act3 for months until they introduced Monster Power (MP) and Paragon. Until then, what was the point of farming? Items? The drop rate was so horrible that it made sense to buy an item for $5 than to farm for 50-100 hours and then still not get it.

After a few months, it became so easy that I could listen to music and play a lot of the game one handed, as the WhirlWind (WW) build became just that easy. Hence, class balance was also lacking. I used to love my Cleave, Revenge, Leap, GroundStomp build. But I just had to use WW for one reason. It was significantly more efficient. And we all know that MMORPGs revolve around efficiency.

I think Blizzard had decent itemization at the beginning. The big mistake they made was that the DPS and stats scaled with each Act and hence, Act 2 had better weapons than Act 1 and Act 3 than Act 2. This created a major problem. One could never find an item that was strong enough to easily farm a lower act or strong enough to try the next act. Hence, the point was to collect as many trash items as you could, to scrape together enough gold to get something decent to get into the next Act for better drops.

Also, according them Legendaries were not supposed to be amazing weapons and rares were supposed to be better!? Now this was ludicrous. Legendary by name means extraordinary. After the community finally raged on and on about it, they did a Legendary patch with amazing new items. The problem which still remains is that there is only one good item for each slot. So there is no reason at all to even try anything new.

The reason for that is the linear design of skills and items. It makes the game much easier to play, but then it also makes it that much more boring as there is no choice is what I want to buy / wear.

E.g. For Barbarian, once I got the Immortal Kings Chest Armor, there is no other armor that is worth it. Similarly for the Ice Climber Boots, Mempo Helm and Echoing Fury Mace.

Initially, at least people were crafting some legendaries like the Helm of Command. That got completely nerfed (as better items were introduced and those were more defensive). So crafting also went for a toss.

So what would people do? Buy whatever they can on the AH or sell the items unidentified (unid).

Think about it this way. People who played for 10-20 hours a week (like me) had an option to get a few 100k gold for a unid item or id it and most probably get a completely rubbish item. So the rich bought all the unids, rolled the dice and got richer. The poor remained poor. And what made it worse was the bug which most people did not know about – You could sometimes see the unid properties before actually id’ing the item. So the rich folks made a fortune by selling trash unid items.

This is exactly why the AH are being taken down and Loot drops are being increased. So that it is fun to find your own items. That also gives me (and hundreds of thousands of other players) an incentive to play.

As I have previously stated, I love the design of Diablo 3. But what it sorely lacks is end game content. Initially, I got tired of running Act3 hundreds of times. Because it was the most efficient. Then, they introduced Ubers, which was pretty fun, but then pointless as the rings you craft are useless 99% of the time.  After that, introduced PvP (or Brawling) which lets you hit one another. This would have been fun, but they didn’t even redo the DPS / HP stats. So one would basically kill everyone in 2-3 shots or die in 1-2 shots. Pretty pointless.

Then they introduced Monster Power. Now this was a good addition because it scaled difficulty so one could fight really tough monsters. They also added Paragon which gave some flavor of progress. The problem still remains though, you are still repeating the same content over and over. Finally, they increased the Paragon gain percentages and added in many more monsters, so it makes for decent fun and give some kind of progress satisfaction.

But in the end, new content and modes are badly needed to keep gamers engaged. Hopefully, the new Nephalem Trials and Loot Runs should make this better for a month or two. But players still need something more to do. And this leads me to my next topic. 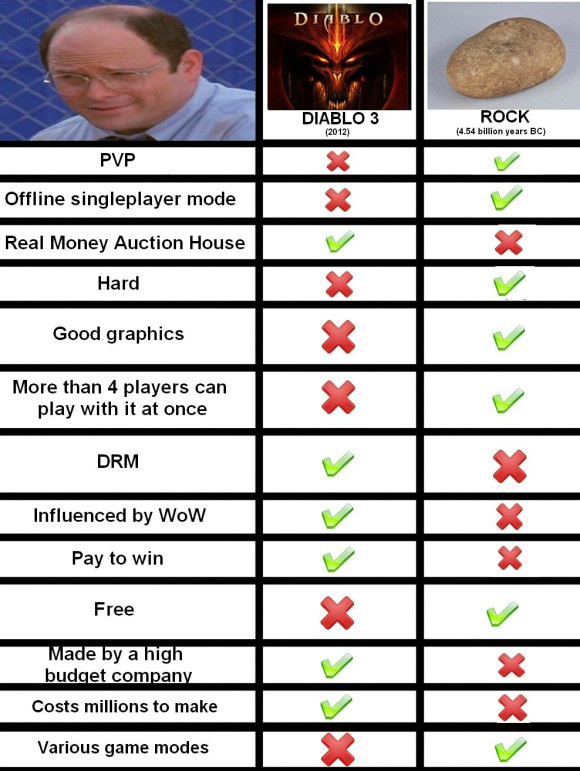 I think this is the part that Blizzard is worst at. They have made sure that we dont have a player lobby to interact with people and dont buy and sell to one another. I used to love helping out lower level players and made many friends that way. Now, I just play with 1-2 friends and never really meet new people.

From Blizzards end, they simply refuse to share information. For the first few months we would see one blue moderator post everyday. ONE – for hundreds and thousands of questions. And then for the next 6 months we would average ONE blue post per WEEK. Finally, they relented and now the CMs (Community Moderators) respond quite frequently. It would have made life so much easier if they started talking to people from the get go and had not waited for over a year to start answering peoples queries and listening to their thoughts.

Another major issues is clarification regarding simple issues. Is flipping items in the Auction House, mapping multiple buttons to one key and multiboxing (One Keyboard / Mouse, playing 4 games at once) allowed ?

IMHO, their patching strategy is also severely flawed. As a player, I would prefer to have at least the quality of life updates as soon as possible. And its better to do many small patches rather than one big patch. Especially when there is downtime for 10+ hours every week and patches take 2-3 months to come.

Lastly, the issue is the lack of events. The game needs to be kept fresh. Why not have a challenge every week? Or simple bonuses? Or events that rally people together. Blizzard is so hell bent on doing it their way that they are making it very linear and extremely boring for us to play. And this is for Fanboys like me, so own tons of Blizzard swag and read every book about D3.

The AH has had its own share of issues. The only fun part of it has been Flipping items (Buying for a low price, selling for a high price). Other than that, for the longest time Blizzard had only 3 filters. This was maddening since most items have 6-7 stats,  so one had to go through hundreds of items. They patched that, but still many items are impossible to look for, Stone of Jordan and Witching Hour in particular.

Other than that, Gold limits were never kept in tune with the market, hence prices would be below the actual GAH price and many people would go to outside sellers to buy the gold, which defeats the purpose of the Auction House. And it took them 6 months to combat all the Gold Seller Spam friend invites people would get.

Lastly, they have NEVER implemented Commas. Is it that HARD to provide a single punctuation mark which would make life easier for millions of people ? 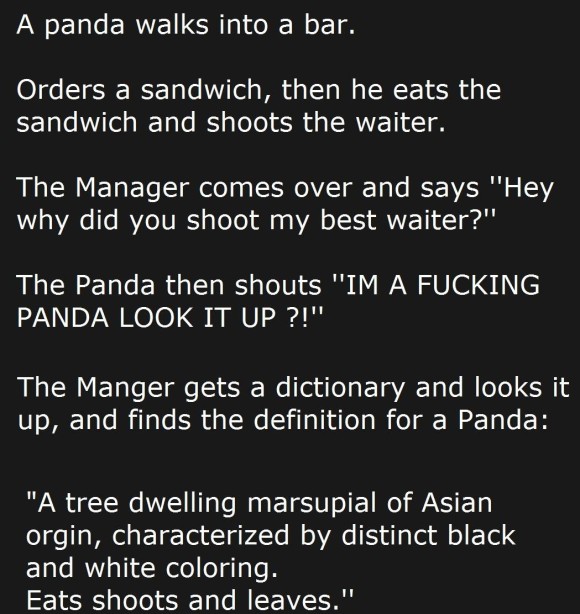 So as you all see, there are so many reasons that the new expansion is needed for Loot 2.0 and why the Auction Houses need to go. If you have thoughts, questions or rants, leave me a comment below !

To see all the details about the new expansion, check out: