At OC4, Oculus announced two standalone headsets in the works: Oculus Go and the Santa Cruz prototype. What does this mean for VR devs?
Edward McNeill
Blogger
October 12, 2017

I'm typing this from John Carmack's keynote at the Oculus Connect conference: 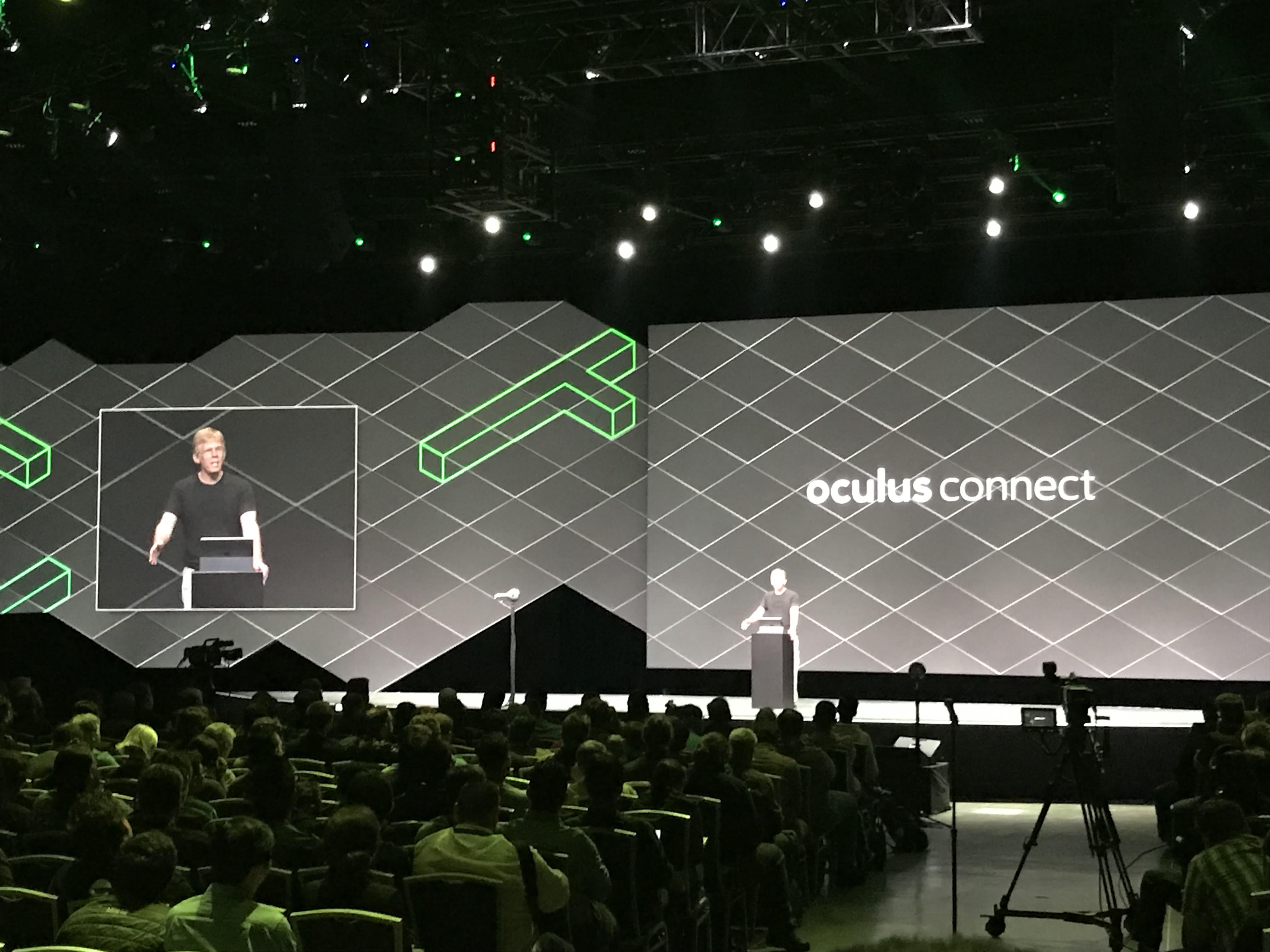 It's been a good conference! Yesterday, this stage was used for the main keynote, and Oculus made a bunch of announcements. The two most interesting ones, to me, were about their upcoming standalone headsets: Oculus Go and the prototype Santa Cruz headset.

Oculus Go is basically a standalone Gear VR: a mobile VR headset that doesn't require you to plug a phone into it. It's coming in early 2018 and will be sold for $200. This is really good news for Gear VR devs (like me!). Oculus Go is going to be compatible with existing Gear VR games, and the bigger the hardware base for those games, the better. Gear VR and Daydream were pretty good options, and cheap at $80-100, but they required you to have certain models of phone. Oculus Go is a good entry-level VR option for those who don't happen to have the right model of phone (like, say, everyone who uses an iPhone).

What's more, Oculus Go is unquestionably going to provide a superior experience compared to the Gear VR. Lots of reasons:
- It's purpose-built. It can leave out any phone hardware that's unnecessary for VR, better distribute weight, etc.
- The lenses and screen are significantly improved, according to Oculus.
- It has built-in spatial audio thanks to carefully positioned speakers.
- It comes bundled with a pointer controller (which is sold separately for Gear VR).
- It'll have a separate battery, so you don't need to worry about draining your phone.

The big worry about Oculus Go concerns its tracking limitations. Oculus Go, like the current generation of mobile headsets, has 3dof tracking. That's 3 "degrees of freedom": pitch, yaw, and roll. It tracks the rotation of your head, but not the position, so it won't track your movement if you lean in or walk around. The controller is also 3dof, so you can use it like a laser pointer and make basic gestures, but you can't reach out and grab stuff.

But the next generation of Daydream devices are going to have 6dof tracking, meaning they track 6 degrees of freedom: the 3 rotational axes plus the x/y/z position of your head. HTC and Lenovo are both launching headsets very soon that will have 6dof head tracking and a 3dof controller. I've gotten to use a headset like this, and although it's awkward to be able to move your head but not move your hands, it's still a big improvement.

I think Oculus Go might end up being a polished product in an awkward position. If Oculus Go is a great 2x3dof experience, will it be able to compete against the new 6dof/3dof Daydream headsets? And what's more, how can you easily communicate why Oculus Go is better than the $20 pseudo-Cardboard headsets you can buy at Wal-Mart?

Of course, it isn't as close to launch as Oculus Go; dev kits aren't going to be shipped until some time in 2018, and I doubt we can expect a launch before 2019 (or very late 2018 if we're lucky). What's more, we should expect serious performance limitations. Originally I thought that "Oculus Go = standalone Gear VR" and "Santa Cruz = standalone Rift". But we can't forget that the Santa Cruz prototype is running on a mobile chipset. Those chips are getting better and better, and there's still time for them to get more powerful, but the computing power will be much closer to current mobile VR than to PC-based platforms.

Even still, I see a ton of potential in the standalone 3x6dof format. Room-scale hand-tracked VR allows a ton of experiences that can't be done on mobile. Most people don't have a powerful gaming PC and aren't excited to set up base stations or cameras. If you believe that that's where the magic of VR resides, this kind of headset will probably be how most people end up experiencing that. Santa Cruz could even be better at room-scale tracking than Rift (especially if you're not using an extra 3rd camera with your Rift).

Again, though, Oculus's competitors aren't going to be standing still. I know for a fact that the folks behind the 6dof Daydream headsets are working on 6dof hand tracking, and that could ship before Santa Cruz does. Microsoft's WMR platform is already demonstrating inside-out tracking with 6dof controllers; though it's not a mobile/standalone/untethered platform, it doesn't claim to require a high-end gaming PC either. And Valve isn't going to quietly let its vision of super-premium VR get displaced just because of the presence of a cable. If they can get a solid wireless display solution onto SteamVR headsets, it could stay king of the hill.

Oculus's strength, I think, is the quality of their hardware. The Rift is comfortable and well-designed. It was slower than the Vive to get hand-tracked controllers, but the Touch controllers are excellent. Gear VR came out after Google Cardboard, but it was an enormous (and important) leap forward in quality. Even now, the 2014 Gear VR provides a sharper, more responsive experience than almost any competing mobile VR headset.

But even if Oculus can keep this up, is that going to matter? Oculus Go could be the best entry-level VR headset, but are most people going to know or care about that? Right now, Santa Cruz might blow people away ("On the whole, the experience was truly amazing"), but is it still going to have that effect in 2019?

From a developer's perspective, it may not matter. Unless you're placing your bets on a single horse (e.g. committing early to exclusivity), you can focus on a single probably feature set. Right now, the VR world is fragmented between 2x3dof (Gear VR, Daydream, Oculus Go), 6dof/3dof (upcoming standalone Daydream headsets), and tethered 3x6dof (Rift+Touch, Vive). In the future, I expect most platforms to be 3x6dof, and I expect the majority of the market to be using untethered headsets based on mobile chipsets. Those are the features that I would design around, at least for games coming out in late 2018 or beyond.